Murder on the Orient Express, the 1974 movie version, had a big influence when I first saw it back in the day. As a designer, looking at those splendid Rene Lalique crafted glass panels in the dining car, I was left hoping that one day I would have the privilege of seeing them in person. The Orient Express train became synonymous with intrigue and glamour thanks to English crime novelist and author of detective mysteries Dame Agatha Christie (1890-1976). She travelled on the real train herself a number of time and met people who ended up becoming characters in her best selling novel. Agatha Christie is the author who created the classic mystery structure; a murder is committed. There are multiple suspects concealing secrets. The detective gradually uncovers the secrets over the course of the story, discovering the most shocking towards the end. It’s a formula still used today.

She released this her first novel in 1934 under the title of Murder in the Calais Coach. The synopsis read; Just after midnight, a snowdrift stops the Orient Express in its tracks. The luxurious train is surprisingly full for the time of the year, but by the morning it is one passenger fewer.

An American tycoon lies dead in his compartment, stabbed a dozen times, his door locked from the inside. Isolated and with a killer in their midst, detective Hercule Poirot must identify the murderer – in case he or she decides to strike again.

The Orient Express had many a change in route since it first ran in 1883 from the ancient city of Constantinople beautifully sited on the Bosphorus at the junction of east and west to Paris, which took some eighty hours dependant on delays, avalances and the like.

Passengers marvelled at its luxurious fittings with ‘… intricate wooden panelling, deluxe leather armchairs, silk sheets and woollen blankets for the beds’ and very soon, Kings, Princes, potentates, spies and socialites were all rubbing shoulders together.

Mrs. Christie made the whole scenario of her classic murder mystery seem so real aboard the Orient Express, that as well as booking a ticket, people quickly became enthralled with her novels and crimes to read on board, especially those solved by her Belgian detective Hercule Poirot.

He gained a huge following of his own.

Please Don’t Read Any More Unless You Want Spoilers. 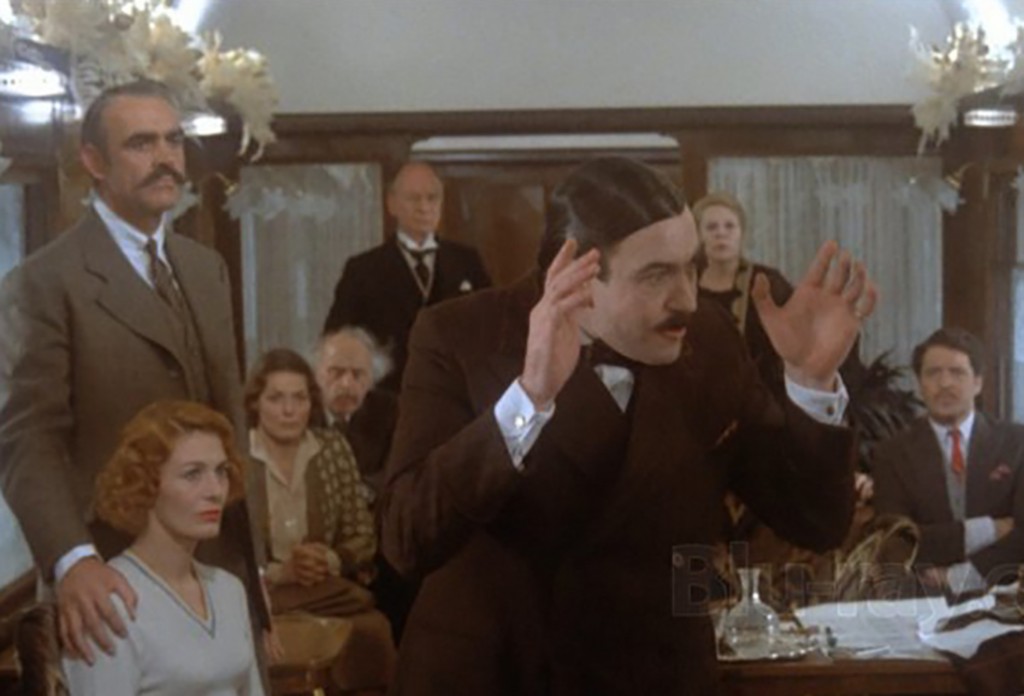 My memory of the first film is that it was an iconic experience. I have to admit to being surprised to discover a new movie was being made, as the first had been such a critical and commercial success. 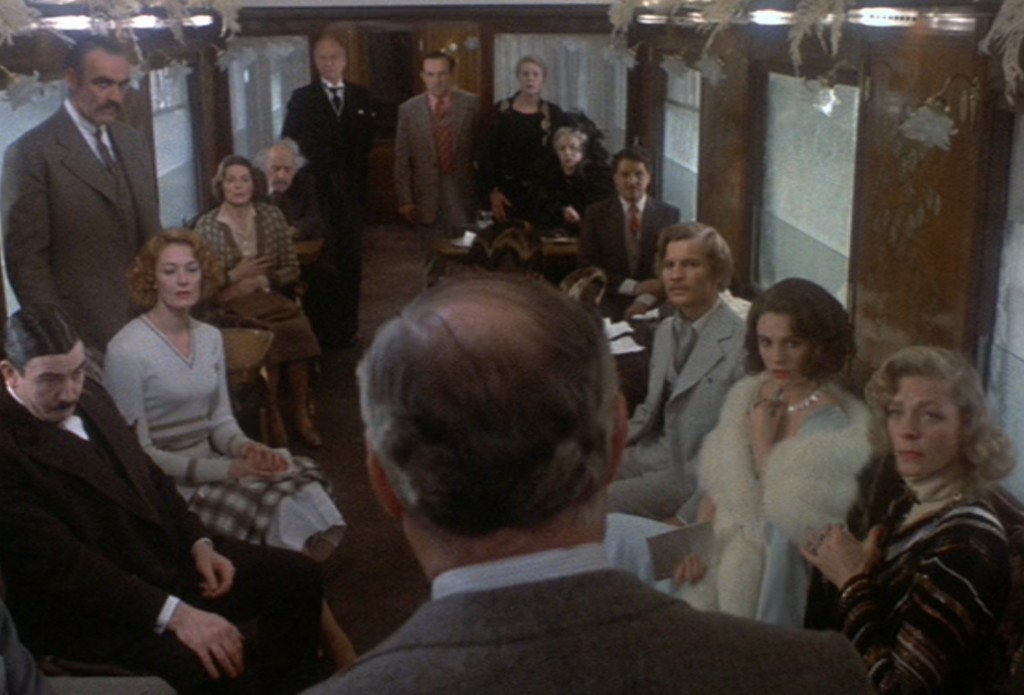 The biggest plus for the first movie is the exterior and interior shots of the train were real, not CGI as in the latest movie, where there is not a Lalique panel sadly in sight! 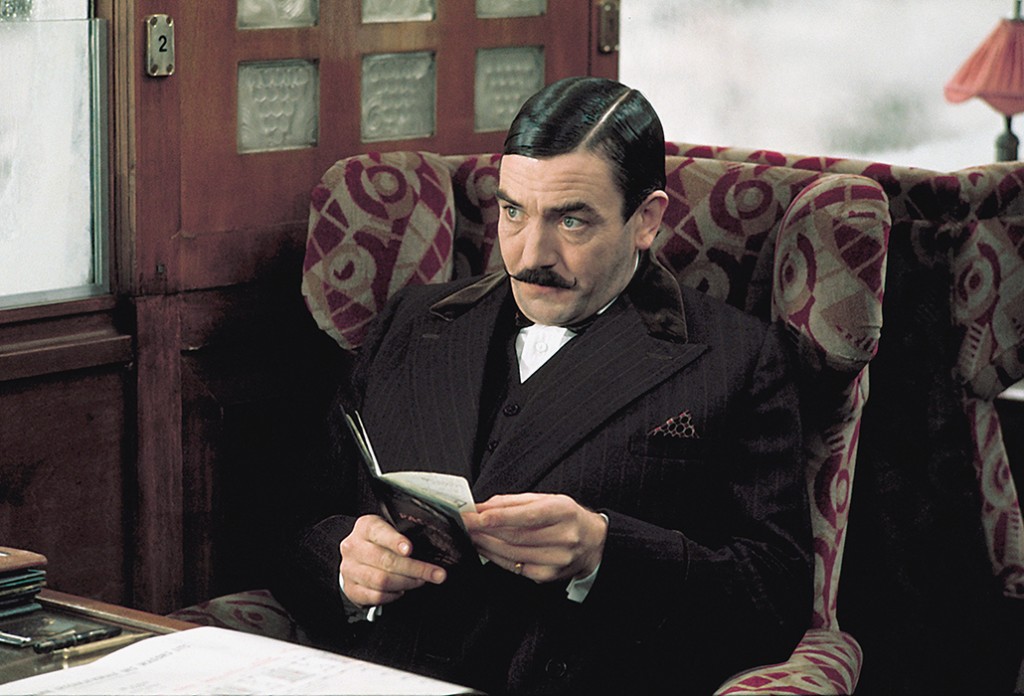 Hercule Poirot the Belgian detective around whom the story revolves as he solves a murder on the train was brilliantly played by actor Albert Finney.

As Agatha Christie’s enigmatic detective, Poirot decides the murder has two solutions, one simple with a single killer who escaped the train. The second however is very complex. It will take all of his skills of ingenuity and famed ‘little grey cells’ to unravel what really happened, keeping us in the loop as he progresses. When he solves the case what he discovers challenges his perceived moral obligation to his employer and to society at large, causing him to question if he should reveal how it was done at all.

To bring me up to date I attended a rescreening of the 1974 film as part of the British Film Festival (October-November 2017).

A few days later I attended a performance of the new version by English actor-director Kenneth Branagh when it started on November 9, 2017.

It confirmed my thoughts the 1974 production had achieved a tense thrilling on the edge of your seat ride, confining us to the train carriages with the rest of the occupants, one of whom may have been a killer.

Albert Finney as Poirot was marvellous. He had made his reputation in London theatre and enjoyed considerable success as he swapped to film because he understood celluloid would pick up the minutiae of detail that needed to be exaggerated on stage for an audience. 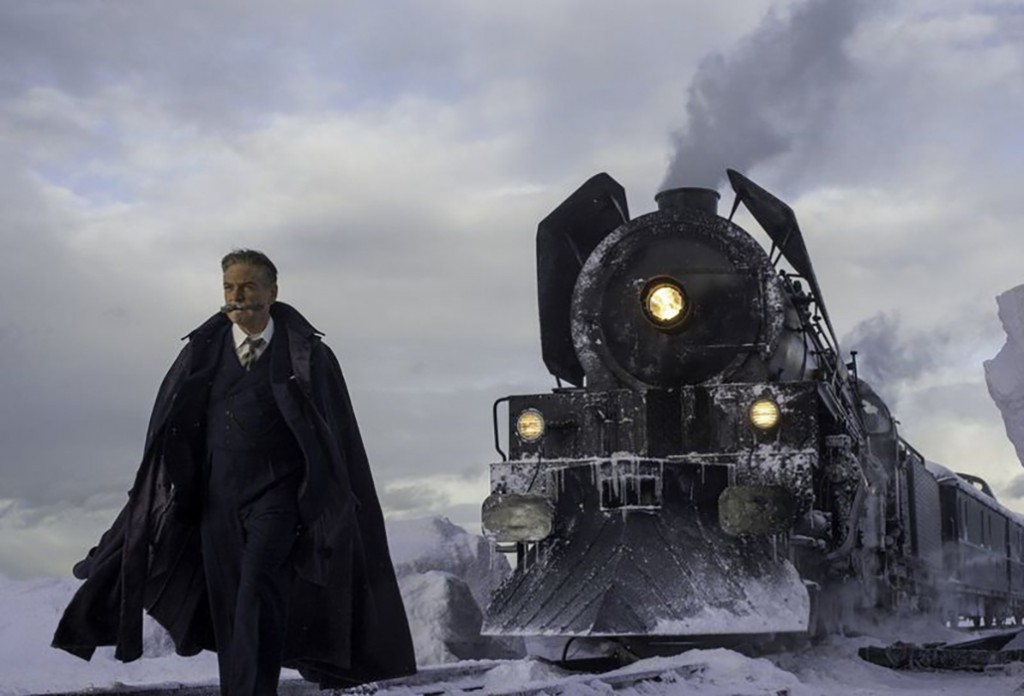 That point of difference is important to the new production re-imagined by Kenneth Branagh also first and foremost a ‘theatre actor’.

Branagh is both playing Hercule Poirot and acting as Director.

He allows us out of the confines of the train carriages and in so doing does sacrifice some of the claustrophobic tension that helped make the first movie such a hit. He also focuses the spotlight on his own performance… rather than the character and his clever detecting skills.

For me this is a great shame. Branagh allowed his flair for the dramatic to overwhelm, ensuring an unflattering contrast between his, and his predecessor’s performance. 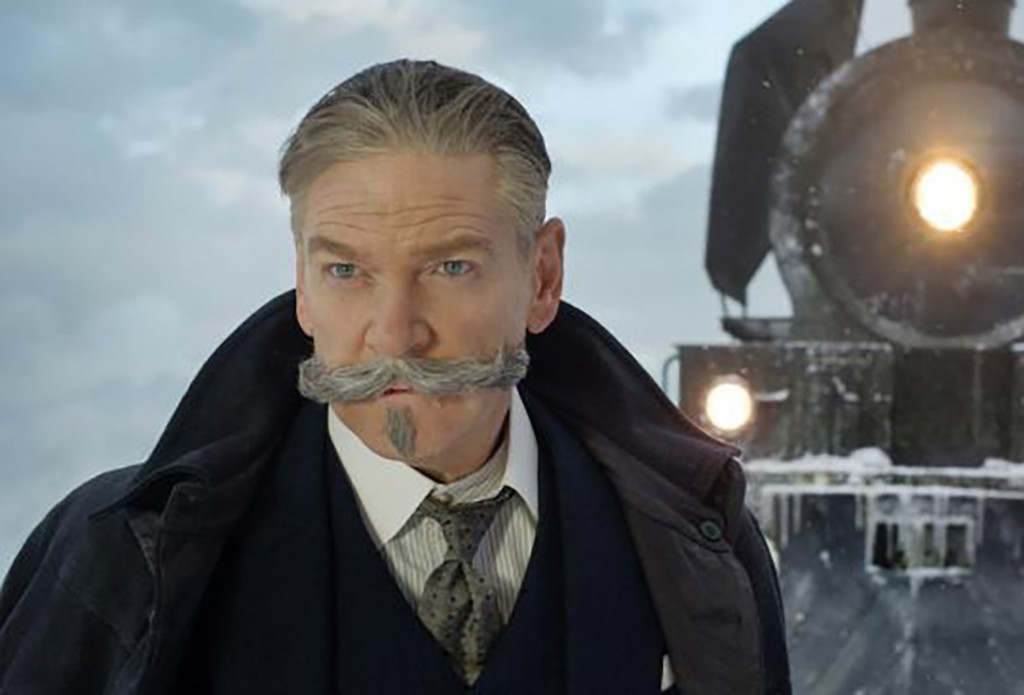 Perhaps to make up for the lack of Poirot’s renowned moustache Agatha Christie complained about as a flaw of the 1974 film, Kenneth Branagh’s moustache seemed irritatingly over the top.

The more extensive prelude to the train trip, which takes place at the Wailing Wall in Jerusalem with a Priest, a Rabbi and an Inman involved was interesting, although I would have rather he had given time taken to flesh out the characters on board the train a great deal more. Along the way the new script had been crafted with a bigger emphasis on some at the expense of others. 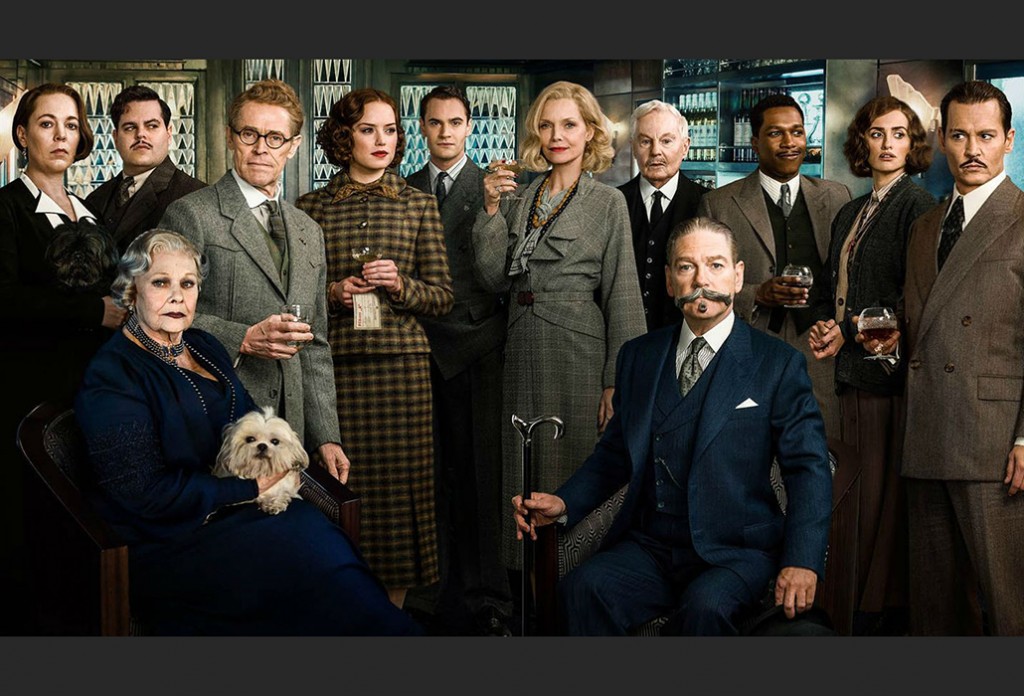 I was pleased we got to meet Daisy Ridley and Leslie Odom Jr. before they went on board  to meet up with Tom Bateman, Lucy Boynton, Dame Judi Dench, Olivia Colman, Penélope Cruz, Josh Gad, Willem Dafoe, Derek Jacobi, Sergei Polunin, Michelle Pfeiffer and Johnny Depp.

It would be fair to say Daisy Ridley and Leslie Odom Jr. had a great connection and her performance is a stand out. Johnny Depp didn’t quite make the impact Richard Widmark did in the original, but his interesting face always captivates. 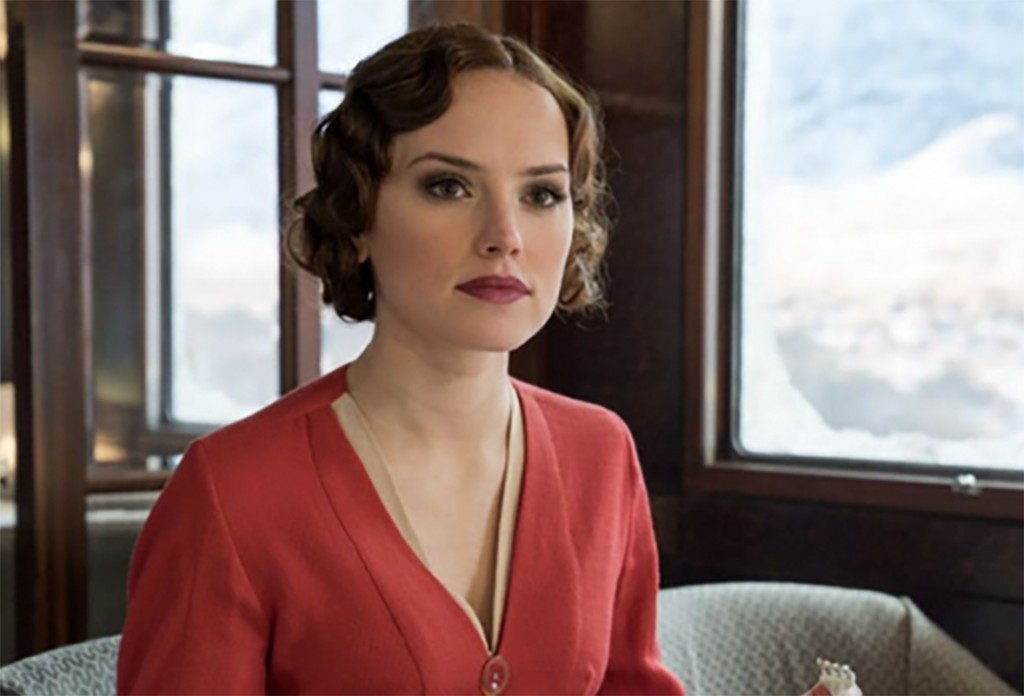 It made me cross that Branagh grabbed much of the spotlight. In so doing he was not able to dim the extraordinary light that shone from some of his co-stars, who subtly out-acted him every step of the way. 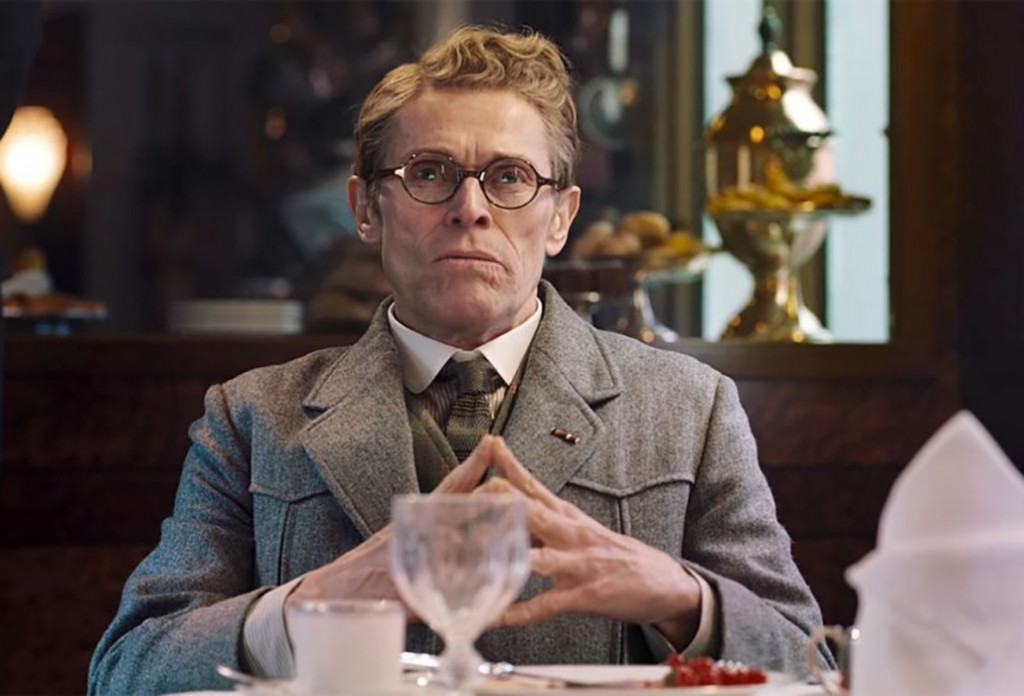 Willem Dafoe dazzles. It was amazing what he achieved with such little dialogue and in true ‘Christie’ style – softly softly he trod – consummate professional written all over his face. 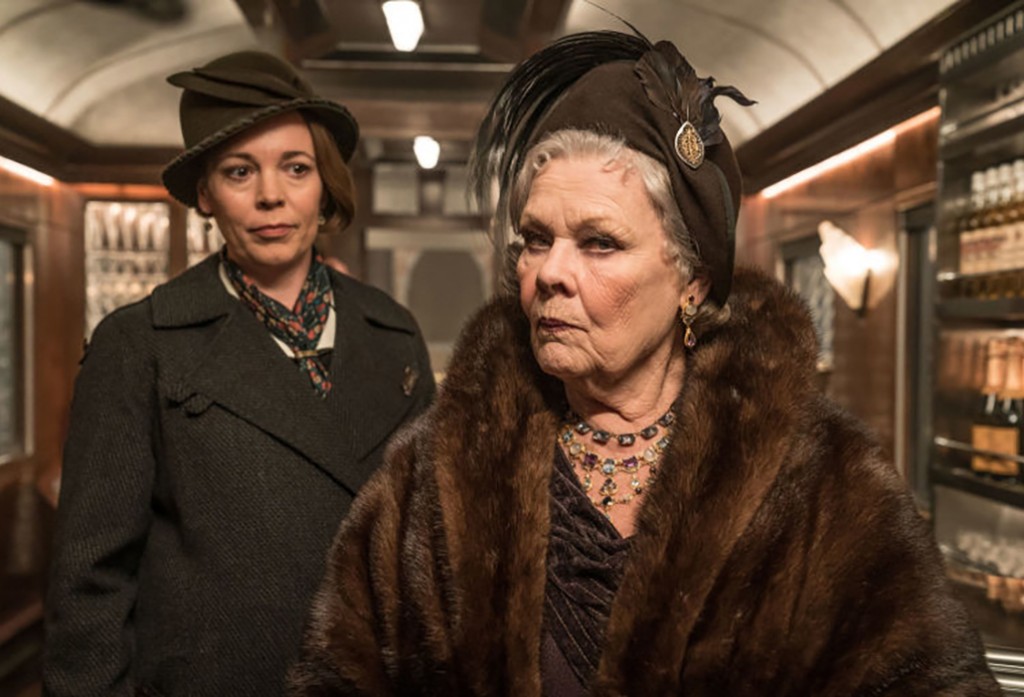 Dame Judi and Olivia Colman had far too little to do… sadly. As we know the Dame can pack quite a punch and Colman is also a true force to be reckoned with. More dialogue between these two would have been welcome. 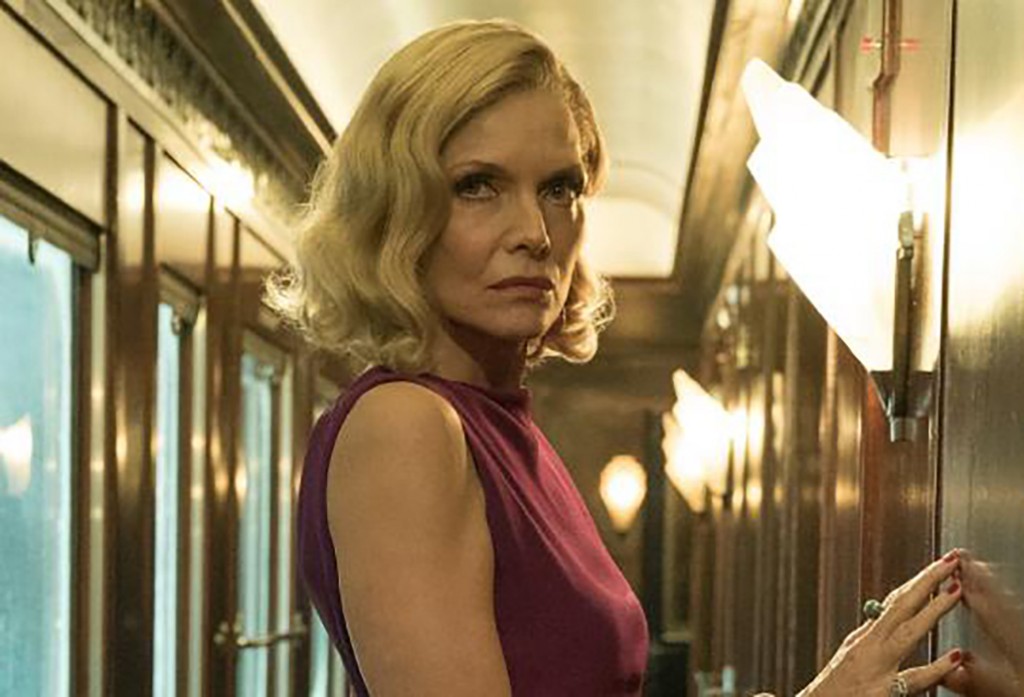 Awesome acting accolades must go to Michelle Pfeiffer. She came out of retirement to play the role of the infamous Mrs. Hubbard, one formerly played by Lauren Bacall. 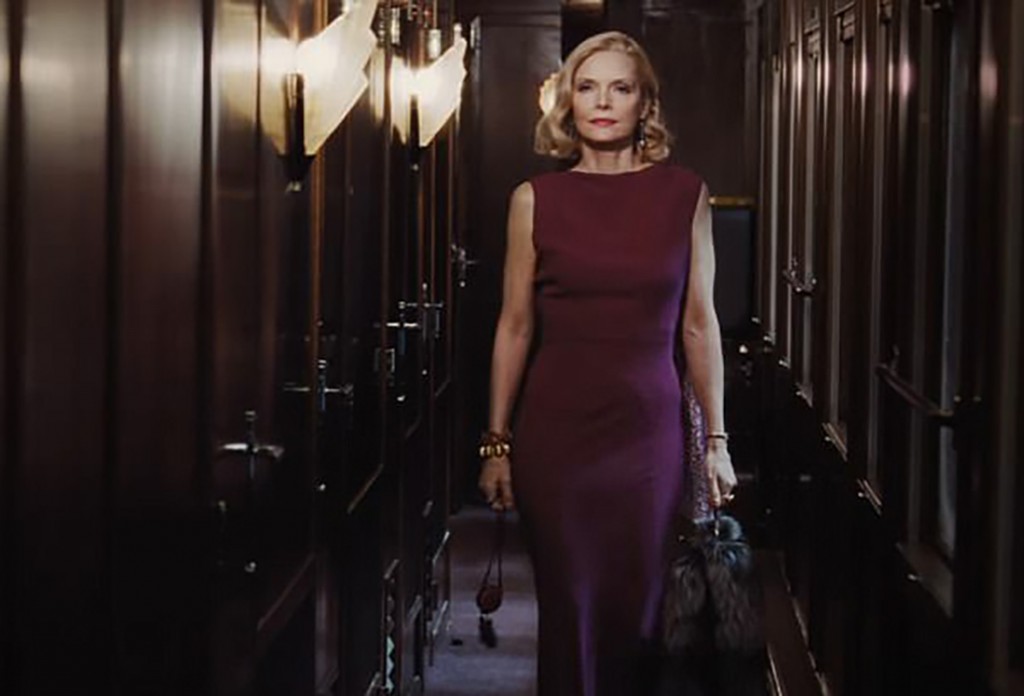 She was quite simply too marvellous for words and I hope she remains in play for the future. Perhaps a best supporting actor award will be on the cards and help to encourage her. We have missed her talents of late.

Have been trying to work out why Mr Branagh felt it necessary to line up his protagonists at a table in a tunnel as if they were about to consume their ‘last supper’ as he delivered his verdict – it was an odd choice and sadly made the complex ending for me, a bit flat. 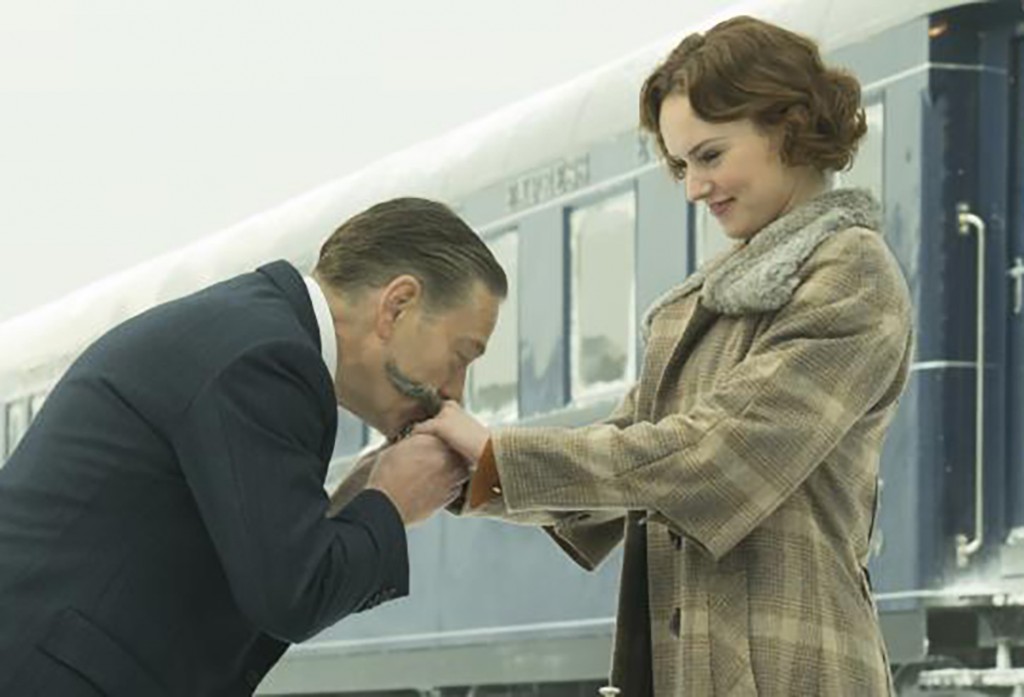 All in all the 1974 stands up well alongside the new version and the acting skills of its impressive line-up of contemporary actors, high-jacked by an over enthusiastic director detective one who with his age and experience, should have known better. 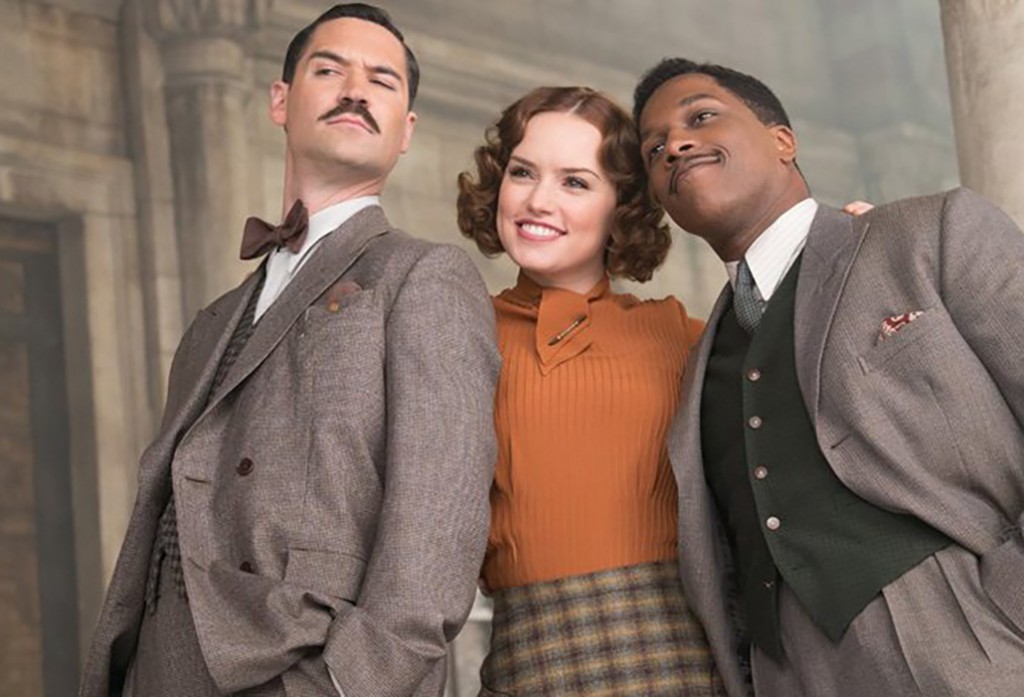 PS: The Venice-Simplon Orient Express train operating today is not the original train but a private venture aiming for the ‘opulence of the original’; a consortium gave it life in 1982 having purchased a number of the original carriages salvaged from the 1920s and 1930s. Its worth a story on its own.

Today the Venice-Simplon Orient Express runs from London to Paris and to Venice as well as other destinations in Europe including Verona. Its prices reflect that it is all about glamourous travel; becoming famous for its fine wine, fine food and excellent service ensuring everyone can still travel in Orient Express 30’s style, which I can highly recommend.

It’s a good journey for the bucket list… however do watch out for a man with a certain kind of moustache and if you see him may be wise to hop off at the next stop.

The Hildesheim Cathedral precinct in Lower Saxony, Germany, contains one of the most outstanding ensembles of ecclesiastical furnishings and treasures in Europe