Civilisation arose in many different ways in our world’s diverse cultures and it would be fair to say most are represented in the collections of the Musée du Louvre at Paris, which is today a vast complex of buildings spread over 40 hectares. The city of Paris in France is a destination many people around the world aspire to see, and the Musée du Louvre a building that has for eight hundred years and more, been at the heart of French history and culture.

The Louvre was a royal palace before becoming a universal museum by decree on March 24, 1848, with poet, novelist and dramatist of the Romantic movement Victor Hugo (1802-1885) declaring it should become a ‘Mecca of the intellect’. The extraordinary grandeur of its great spaces both inside and out have been designed based on ideas and philosophies embodied in ‘sacred architecture’ from the days of ancient Greece and Rome, and they have been restored without any further changes. 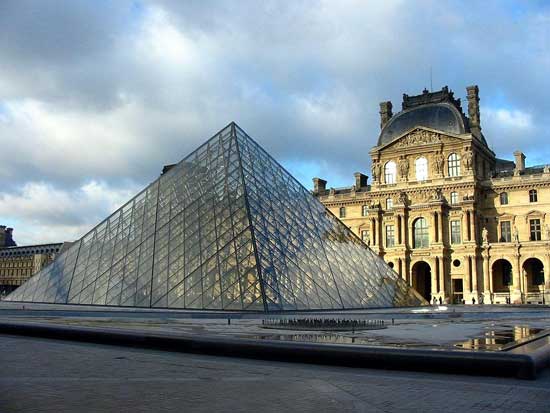 The new rooms of the Pavilion de l’Horloge (the Clock Pavilion), which dates from the seventeenth century, and the newly renovated glass Pyramid re-opened their doors in July 2016.

In the emblematic space of the Clock Pavilion in four rooms located on three levels, through works of art, interactive models, photographs, and films you can seek to learn about and discover the Louvre’s amazing history for yourself and plan your visit.

In the words of Jean-Luc Martinez, President-Director of the Louvre

“The real goal is to offer our visitors a more welcoming, more accessible, and more generous Louvre.” The borders of modern France are more or less the same as that of Gaul in ancient times. Conquered by Julius Caesar in the 1st century before Christ Gaul adopted the Latin language, from which the French language evolved.’

The name France derived from the Latin Francia, literally meaning land of the Franks, which its people were known as from the ascension of Hugh Capet first King of France in 987 and throughout the Middle Ages. By then French nobles were establishing their own power bases, building chateaux and resisting taxes, constantly challenging the King.

By the twelfth century Paris, the largest city in Europe, gained a fortress, which was built along the banks of Seine to the west of the city. It became known as the Louvre, deriving from a Frankish word meaning a fortified place. Its construction was integral to the struggle between the Capetian Kings of France and Plantagenet Kings of England and reflects one of the great statesmen of the Moyen age, the feudal King Philippe Auguste or Phillip II (1165-1223) and his determined stance as a protector of his people.

Of the medieval fortress that first existed, there is little left – only some of its remains are still visible at basement level. All of the additions and extensions have been destroyed, restored or improved and added to over the centuries. During the fourteenth century Jean duc de Berry (1340-1416) who was the son, brother and uncle of three successive Kings of France, recorded its architectural grandeur in the illuminated illustrations of his very personal Le Très Riches Heures (The Book of Hours), informing its sacred stories and art of complex simplicity.

It was all about presenting the imposing mass of the Louvre of Charles V, his brother transforming Christian mysteries into a visual language that people could understand, by recording buildings they knew. The Louvre appeared in the illustration for the month of ‘October’, produced as part of his ‘Calendar’. The building was so superbly detailed by the Limbourg Brothers, the family of Flemish artists commissioned to complete the work, that when this initial incarnation was destroyed, several centuries later they were able to build a model of it.

King Francois 1 (1494-1547) was the first of five monarchs of the Angoulême branch of the House of Valois, was for of all those who worked for him, extravagant, generous and kind.

Renowned as a knightly King and a ‘Renaissance’ prince, one whose passion for knowledge was only exceeded by his desire for more, King Francois was a humanist; a patron of the arts and scholarship.

Each of his building projects meant luxurious decorations both inside and out. However the ‘Renaissance’ style palace re-modelled by Francois has today been entirely absorbed into the Louvre’s construction and expansion for the modern age. Architect Pierre Lescot (c1500-15 – 1578) who collaborated harmoniously with far and away the best sculptor of his age, Jean Goujon, earned his reputation by rebuilding the Louvre. The facade of his Square Court survives complete, although some its reliefs have been recut.

The effect as a whole is one of ornamental beauty as he produced his own form of French classicism. The orders of antiquity were not used as they had been by architects before him or as the ‘rules’ of antiquity demanded, but for their decorative appeal.

Lescot was certainly not predictable, not caring to make everything match, but instead giving each wing of the building characteristics and motifs of their own. This ensured that today the architecture of the Louvre still engages the mind and conversations in admiration for its aesthetics, which is why it became over the centuries, a popular institution with the French people. His interiors too were seen as ‘revolutionary’. Goujon gave form to caryatids from ancient Greece unknown at that time in France, inspired by engravings thought to have been from a publication of Marco Pollio Vitruvius 1st century architectural treatise that he had seen or owned.

At the foundations of the classic tradition in French architecture, he inspired those who came after. One of those was architect and engineer Jacques Lemercier (b1580-5 – 1654)) who was the son of a master mason. In 1624 he was put in charge of the ‘Louvre’ project by Cardinal Richelieu (1585-1642) the French clergyman, nobleman and statesman who was King Louis XIII’s chief minister. He was ordered to continue the Square Court of the Louvre according to a scheme conceived by Lescot in the sixteenth century and it would take until about 1645 to complete. The clock was incorporated into its elevation during a remodelling in the 1850’s.

In addition he enlarged the Hotel de Liancourt previously built by Salomen de Bosse and was involved in the building of three great Parisian churches The Oratoire, St. Roch and Val de Grace. The foundations of the original medieval Keep, still visible in the basement

The Louvre at Paris is a wondrous place, and I must say that it has always been one of my favourite places to visit over three decades of travelling and more.

Over the years I always entered through an alternate entrance other than the pyramid, where queues are the order of every day. 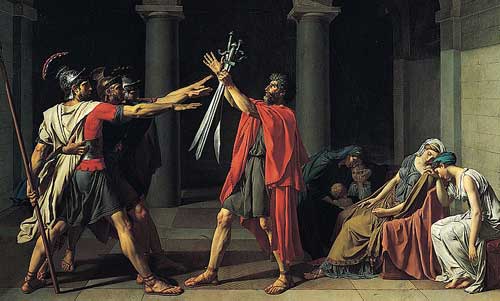 Entering into the Denon Wing you encounter some of my favourite paintings in history by Jacques-Louis David (1748-1825) who dominated painting in his day.

They all have so many aspects that commend them however his marvellous work of 1784, The Oath of the Horatti, has always been special.

This emotionally arresting work visually tells a story of the ancient Roman Republic where three sons are swearing to their father that they will defend Rome to the death while the women in their life weep.

The Horatii were designated champions of the city of Rome while the Curiatii represented the city of Alba. In the 7th century they were chosen to fight each other to put an end to a bloody war between them both.

As the sons that fought were all members of one family it was particularly distressing and demoralizing all at once. The Death of Marat by Jacques Louis David

David’s painting powerfully proclaims the principles of a man’s duty to his homeland in a patriarchal society this stirred the population and helped to fuel the French revolutionary spirit.

In David’s time, there was a growing movement toward a democratic government and many believed they had to be completely committed (like the Horatti) in order for it to succeed and the painting, like his other work revealing The Death of Marat, widely considered the artist’s masterpiece, it became symbolic of the struggle.

Marat had come to embrace the idea that the monarchy should be abolished and the populace supported him and dying a martyr for the people’s cause would ensure that we would know him to. My favourite aspect of the Louvre would be the majesty of its sculpture collection from the headless winged Victory of Samothrace from the Hellenistic age (3rd – 1st century before Christ), shown standing on the prow of a ship, to the glories of its works by neoclassical artist Antonio Canova (1757-1822) including Cupid and Psyche. Bouchardon (1698-1762) – A Sublime Idea of Beauty an exhibition on view at Musée du Louvre, September 14 to December 5, 2016, presented a tribute to architect-sculptor Edmé Bouchardon, whose works combined ‘classical Roman techniques and contemporary motifs’.

Winner of the most sought after award the Prix de Rome, Bouchardon spent a decade in that city before returning home to become sculptor to King Louis XV (1710-1774).

His“Cupid Cutting His Bow from the Club of Hercules” (1739–50) is a classical piece exhibited at the Louvre. The sculpture gallery also includes an image of the Goddess Artemis accompanied by a deer. She was one of the first statues from Greek and Roman antiquity to arrive in France.

A splendid 2nd century Roman copy of a 4th century bronze statue attributed to Leochares, the famous Greek sculptor, Artemis was the sister of Apollo the Sun God. She is a most popular theme in the history of art.

Greek Legend tells of how Actaeon, a young man who had the misfortune to come upon her while she was bathing, was changed into a stag that was then pursued and torn to pieces by his own dogs. She is shown with her chiton (tunic) tucked up to her knees making it easier for her to pursue her quarry.

She is one of the goddesses over whom Aphrodite, the Goddess of love had no power and in time became a ‘mother figure’, guardian of the home and when the moon shone and she was present, beasts and plants danced. The Romans called her Diana and the crescent moon, often worn as a diadem in her hair, became one of her major attributes. The Louvre’s exterior has been created and crafted by many of France’s greatest architects, sculptors and painters while an army of artists and craftsmen have enlivened and enriched its interiors.

Since it became a museum, making the Louvre as user-friendly as possible for the viewers of the modern age has been an important objective. Twenty-five years later, museum attendance has more than doubled and so all who visit will no doubt welcome the changes.

Tenor Fernando Guimarães singing in The Return of Ulysses for Pinchgut Opera, will imbue Monteverdi’s great work from 1639 with the dramatic realism it deserves