At the touch of love everyone becomes a poet* France, before the arrival of the dreaded Black Death in the fourteenth century, was the most populous region in Europe and third in the world behind China and India. It enjoyed what is now known as the Medieval Warm period, which lasted from the tenth to the fourteenth century. This was when its climate was the most agreeable and growth of its population was directly linked to the temperate weather and its effect on crops and livestock.

The “Twelfth Century Awakening” refers to an outpouring of  intellectual inquiry and discovery that took place as Cathedral schools and universities were established through the powerful Islamic influence on European thought. This is when the classical revival and a new and exciting literature for leisure appeared. It was defined by the use of the Latin word Romanz as distinct from what was known as ‘real’ literature. With its captivating themes of love, ladies and passion in the courts of Europe it was not long before it became known as romantic literature. While romantic love owed a debt to the classical Greek and Roman past, expressing personal feelings in relation to the beauty and bountiful joys of women became the province of troubadours, who were both composers and performers of lyrical poetry.

They roved about the countryside visiting castles and their communities to deliver the latest ditties going about in song. The themes they favoured were about chivalry and courtly love.

The origins of courtly love can be traced to the court of William IX, Duke of Aquitaine one of the first troubadour poets as well as leaders of the First Crusade to the Holy Land in 1101. Born on the wrong side of the blanket, William was the son of his father’s third wife, whom the Roman catholic church did not recognize. An anonymous biography written in the thirteenth century said of him…‘The Count of Poitiers was…a fine knight at arms, liberal in his womanizing, and a fine composer and singer of songs. He traveled much through the world, seducing women’. He certainly was the troubadour whose work still survives as a testimony to his romantic adventures. He loved scandal and shocking everyone but was reputedly kind and generous. We could also be generous and say he shared the love around…. 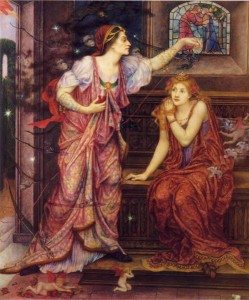 I have given up all I loved so much
chivalry and pride
and since it pleases God I accept it all
that he may keep me by him
I enjoin my friends, upon my death
all to come and do me great honour
since I have held joy and delight
far and near, and in my abode
Thus I give up joy and delight
and squirrel and grey and sable furs… 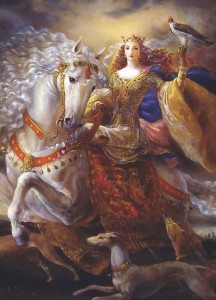 Eleanor of Aquitaine (c1122 – 1204) was in her time the most famous woman in the world. William’s granddaughter she was very ‘worldly’ and her conduct was repeatedly criticized by the Church. She grew up at the court of her father William X Duke of Aquitaine renowned as being at the cutting edge, if you like, of early twelfth century culture. She was married to the heir to the throne of France when she was fifteen. The Abbot Suger at the Cathedral Basilica of St Denis a building which is of unique importance historically and architecturally in France, was in charge of the wedding arrangements.

Within days the old king had died and Eleanor had become Queen as Louis ascended the throne. It was a marriage of lands, rather than minds or hearts and eventually was put aside because she only gave her husband two daughters. She then married Henry, Count of Anjou and Duke of Normandy, who within two years had become King of the English and she Queen. She bore him five sons and three daughters during the term of their tempestuous relationship, because he was a known philanderer. Eleanor, as a powerful woman, who led a very interesting life, inspired many stories about courtly love. She exerted a great deal of influence on the destiny of her children, including King Richard the Lionheart and his wayward brother the infamous King John. Her life has been held up by scholars to much scrutiny and from it we can gain an understanding about what motivated a knight or king’s love for his lady.

During the medieval period the relationship between a knight and his liege lord was exceedingly important. The knight owed his Lord complete fealty. However this in turn meant he also owed service and obedience to his Lord’s lady, who was in complete control of the situation in regard to their relationship.

As many of the marriages of the time were arranged to bring fortunes and land together and not love matches, this could, and did cause all sorts of dilemna’s for the wife, especially if the knight was young, handsome, upright, valiant and honourable all of which were noble traits to be admired and cherished.

He in return was to be inspired to do great deeds on her behalf, to win and keep her favour without dishonouring his knightly vows by giving into passion. Courtly love was all about declarations of service, devotion, and passion and, an emerging sense of the self. It was meant to be ennobling, whether the lady knew about his love for her or loved him in return. 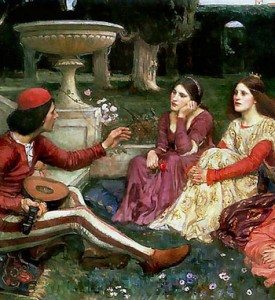 It was love conducted on a higher plane than one between a husband and wife, because it was idealized and never consummated or complicated by having a sexual relationship. Often the lady in the courtly love relationship was put in the position of being a mentor or model for the man of her heart’s appropriate behaviour. It was her responsibility to lead him into channeling his energy into other noble pursuits, rather than roving about the countryside raping women.

The idea that courtly love improved his character then was the crucial element integral to the whole tradition. The courtly love song sung by a languishing lover to his lovely lady proclaimed that although their love was a secret, because convention required it to be, he was content to let her know she was the sole mistress of his heart. All his songs were solely for her.

Sweet noble heart, pretty lady,
I am wounded by love,
so that I am sad and pensive,
and have no joy or mirth for to you,
my sweet companion,
I have thus given my heart

‘Bad Guys’ countertenor Xavier Sabata will perform music by Handel, Vivalid and Porpora at a penultimate night of opera arias at Hobart Baroque 2014 in Tasmania