In talking about the arts with a friend once, he reminded me that ‘… just as a palate can be educated to appreciate fine wine so too can both the eye and the ear be educated to distinguish the rare from the ordinary, the exquisite from the mundane’* So it is also with any visual and performance art forms.

Discussing my favourite movies released in Australia in 2016, I should point out that they don’t necessarily fit into international award seasons. I thought it best to start by reflecting on how I came to this point by January 2017, where writing about the art of movies have become integral to my life story since I began publishing The Culture Concept Circle in 2010. My love of movies on the big screen really began at the Boomerang Cinema at Coogee Beach in Sydney during the late 40’s and 50’s in my formative years, where yes I rolled Jaffas down the aisles at the Saturday matinee with my brother and our local friends.

At first animated features such as Lady and the Tramp won our young hearts, along with Peter Pan and Cinderella.

As there were always two movies on every program, an oldie plus the new release, with an intermission in between, we also often took in movies made in the hey day of the big studios in Hollywood between the wars.

My favourite romantic war drama was Mrs Miniver, which had been made before I was born. Actress Greer Garson didn’t ever let any of her fans down, with Mrs Miniver winning six Academy awards, including best actress. 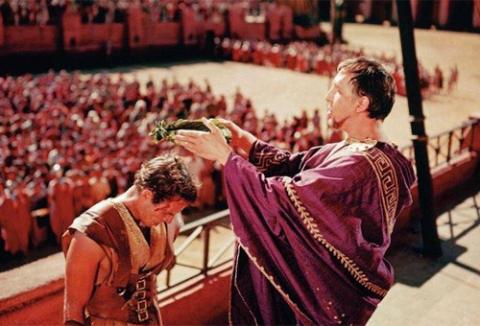 From when I was about 10 years of age I also sat quietly with my brother next to our parents on Friday nights.  Our father was a huge movie buff and rather than leave us ‘home alone’ where he couldn’t be sure of what mischief we would get up to, he took us along ensuring that we had the added treat of seeing just about every movie released throughout the 1950’s and early 60’s and more besides.

This was the great period of biblical dramas The Robe, The Ten Commandments, Ben-Hur and stories of the courage of wartime with English movies such as The Dam Busters and The Bridge on the River Kwai. It was also a period of innovation with colour Cinemascope coming on line and great mystery thrillers such as Rear Window, North by Northwest and Dial M for Murder ensured there was never a dull moment.

Then there was the joy of movies such as The King and I, Roman Holiday, Sabrina, Singin’ in the Rain and Some Like it Hot.

English movies however became just about our family favourite, with wonderful actors including David Niven, Dirk Bogarde, Alec Guinness and Peter Sellers, ensuring we were kept, and remained, highly amused.

It is a long time ago now, and while many would still say movies are just about ‘entertainment’ I would tend to disagree as for me they have, over the period of my lifetime, become a significant art form, one that also contributes to both our social and cultural awareness and development as human beings.

Learning to appreciate anything in life is a process that can take a lifetime to achieve and in endeavouring to understand how I should feel or respond to art in all its many forms and discover just what signifies great art, I do not look just at the… outward appearance of things, but their inward significance’.

Art is for me, a visible expression of something both profound and invisible: in whatever medium is used, and whatever forms it takes, it is shaped by the culture and the age that produces it.

My number one movie for 2016 Paterson completely fits this analogy. I had to think long and hard about naming one above the others, as there have been so many extraordinary presentations during the last year.

In this respect I must mention Moonlight, a coming of age story specifically about a black man, which will resonate for a long time with people from many different creeds and cultural backgrounds.

It’s important to me that I don’t see myself as a critic, but rather as someone wanting to comment positively about the movies I believe our readers want to hear about, those that stood out from the crowd, contributing much to the art of movie making as well as shaping our societal and cultural evolution. Paterson, the simply told story about a poetry writing bus driver in the city of Paterson, New Jersey, is my number one choice, because it quite simply stole my heart completely away. It is hard to explain why in the presence of fiercely fabulous company such as the marvellous Aussie production LION, and also being a Star Wars tragic as I am with the fabulous Rogue One arriving on the scene.

However for me by presenting his deeply philosophical work about an unpublished poetry writing bus driver, whom he never patronises, Jim Jarmusch created something truly special; Paterson is movie making at  its best unassuming, quiet and deeply affecting. It is so, Zen. It features that very wise actor Adam Driver, who is so totally awesome in the title role, while being supported superbly by the lovely Golshifteh Farahani.  When he smiles it is as if the sun has come out and everything is right in the world. It is and was for me, a true gem.

My list of favourite movies after Paterson: A Poetic Bus Driver Living Life in Love with Laura, not in any particular order, are

Hidden Figures: Proving Prejudice and Racism Must Be Overcome

Manchester By The Sea, Reluctant Guardian Reflecting on Loss

Lion – Dev Patel, Taking a Voyage of the Heart to Find Home

Jackie – Natalie Portman, a Portrait of a Woman of Influence

Rogue One: A Star Wars Story – Rebellions are Built on Hope

The Founder: McDonald’s – Art of Realising an American Dream

The Fencer, a Film by Klaus Härö – Fine Art of Sportsmanship

ROOM, Love Has No Boundaries – Beyond Walls there is World

Hunt for the Wilderpeople – A Renegade Odd Couple on the Run

Eddie the Eagle: Redefines a Hero, How High Can Hearts Soar?

The Danish Girl – Exquisitely Exploring the Meaning of Love

The Revenant – Leonardo DiCaprio Teaches The Art of Survival

The Lady in the Van – Dowager Duchess to Delightfully Dotty

a Film by Klaus Härö – Fine Art of Sportsmanshipa Portrait of a Woman of InfluenceArrival – Accepting an Alien GiftAt the MoviesCaptain Fantastic – Viggo MortensenDelightfulFlorence Foster Jenkins – World’s Worst Vocalist Captivates. Eddie the Eagle: Redefines a HeroHow High Can Hearts Soar?Hunt for the Wilderpeople – A Renegade Odd Couple on the RunJackie – Natalie PortmanLearning from ExperienceLion – Dev PatelLove and Friendship – TantalizingLove Has No Boundaries – Beyond Walls there is WorldManchester by the SeaPaterson: A Poetic Bus Driver Living Life in Love with LauraRAMS: Far from a Woolly Tale – Iceland’s Sheepish SuccessReinventing FatherhoodRogue One: A Star Wars Story – Rebellions are Built on HopeROOMSpanish Movie Gem – Learning to Leave Life in GraceTaking a Voyage of the Heart to Find HomeThe Danish Girl – Exquisitely Exploring the Meaning of Love. The Revenant – Leonardo DiCaprio Teaches The Art of SurvivalThe FencerThe Founder: McDonald’s – Art of Realising an American DreamThe Lady in the Van – Dowager Duchess to Delightfully Dotty. Brooklyn – A Love Story Perfectly Timed for Valentine’s DayTop Twenty MoviesTruman