My Zinc Bed was presented at the Ensemble Theatre in Kirribilli, a harbour side suburb of Sydney. This play was by English playwright, screenwriter and director David Hare who is well known for adapting the novels of The Hours by Michael Cunnigham and The Reader by Bernhard Schlink for films.

My Zinc Bed is a provocative play intellectually investigating controversial issues about the nature of alcoholism and its treatments. Is alcoholism a disease or a habit? Can alcoholics resume drinking in a  controlled manner?

These were some of the questions explored through the actions and dialogue of the three characters Paul Peplow (Sam O’Sullivan), Victor Quinn (Sean Taylor) and Elisa Quinn (Danielle Carter).

Paul Peplow is a recovering alcoholic and a staunch member of Alcoholics Anonymous (AA). He is a budding poet and “paddles in journalism.”

Paul Peplow was very surprised to discover that he had secured a highly prized and rare interview with Victor Quinn.

Victor Quinn is a confident, suave, articulate self-made millionaire. However lurking beneath this veneer is a man obsessed with a fierce antagonism towards AA and strong indications of his own alcoholic addiction. 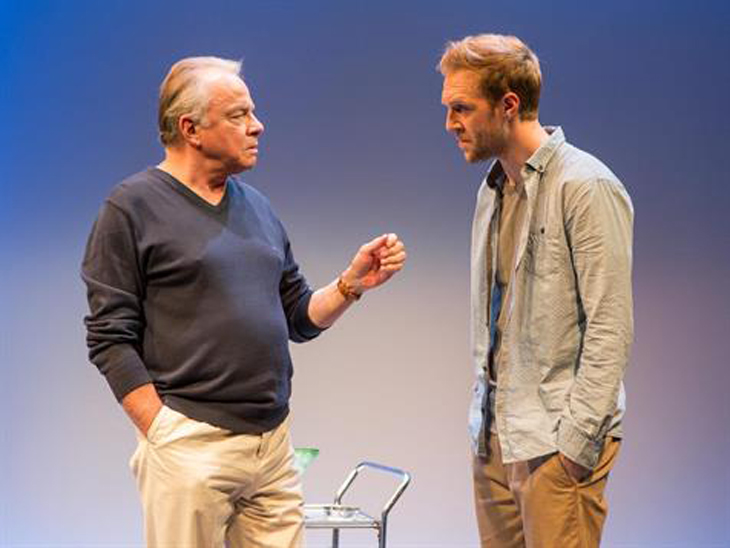 Paul was immensely intrigued by the motives behind the reclusive and very private Victor agreeing to the interview. Victor hits to the chase very quickly identifying Paul as an alcoholic and current member of AA. Paul retorts “my aim is to go to bed sober at night.”

As well Paul was shocked to discover that not only was Victor acquainted with his poetry but he proudly recited a verse. A long time elapsed before Paul was given the opportunity to actually begin the interview.

Finally Victor responds to questions about where he lives, his experiences as an active communist party member then his move into a highly successful entrepreneurial career path. But he blatantly avoids answering questions about children.

An usual outcome of the interview was that Paul secured employment working for Victor and the workplace was where he met Elisa Quinn, Victor’s wife. What began as an office relationship quickly escalated to a passionate affair.

Elisa Quinn confided in Paul about her past drug and alcohol addiction. She was drunk and high on drugs when she first met her future husband Victor Quinn. She expressed how having two children made it more difficult and that she “was not a stranger to self-hatred.”

All the while Paul insisted he had to avoid intimacy as he was a recovering alcoholic and bitter about the end of a long term relationship with an aspiring actress. Paul was lonely and recognised that fortunately Elisa Quinn had the support of her husband Victor in the recovery process.

Paul was invited into Victor and Elisa’s home where philosophical questions and soul searching were raised about happiness, faith, ideologies and the common good.

Victor believed “we will know nothing till we are laid on our zinc beds.” Tensions mount as Paul demands a drink and the consequences of going off the wagon build. The issue of being cured for Victor Quinn was ambiguously layered throughout the play.

There was much ambivalence about Elisa Quinn’s alcoholic status she wavered with the complexities of controlled addiction surfacing. Victor Quinn was vitriolic in his condemnation of AA and was against the regime AA imposed on its members replacing alcohol dependency with “coffee and confession.”

However the outcome for him in the final scene reinforced the implications of his addiction and his personalised path to recovery.

Sean Taylor’s performance was impeccable he absorbed the complexities and nuances of the demanding temperament of Victor Quinn. His insight into the character’s experiences, behaviour, emotions and personality was effectively interpreted and communicated.

He executed the role with the panache and style of a very seasoned performer. His stage presence was charismatic and his sense of timing flawless. He absorbed his character brilliantly, his owning and controlling a powerful company was totally believable.

Sam O’Sullivan’s picture of sobriety was always tinged with the tension that underpins withdrawal and the relentless discipline of abstinence. His ability to analyse and research for the role ensured that the development of the attributes of the rehabilitated alcoholic were very convincing.

Danielle Carter oozed an initial confidence that purposefully and gradually allowed the vulnerability of an addicted personality to filter through her character’s portrayal.

She was dynamically stylish, alluring and compelling. The Director Mark Kilmurry expertly extracted the conflict, contradictions and decimation of the addictive characters in this three-handed play.

Stage movements were directed with a natural precision and structured to support the enigmatic nature of addiction and the difficulties of the path to recovery.

Tobhiyah Stone Feller’s set design was elegant simplicity and minimal construction at its very best. The single grey chair cast a chequered shadow symbolic of the highs and lows of sobriety.

The modular raised platform set off line to the left of stage and backed by three flat wall partitions provided the perfect back drop and focused attention on the dialogue and action of the evolving drama.

The clean lines and geometric nature of the design was versatile and imaginatively conceived to compliment the conceptual nature of the play.

This was reinforced by the subtle use of colour devised by the Lighting Designer Nicholas Higgins. Colour was effectively used to define the changing scenes within the plays construction.

The cast and creative team were in unison in their vision of the play My Zinc Bed, its purpose and implementation.

This unity helped to give a semblance of reality to a highly intellectualised concept of alcoholism.