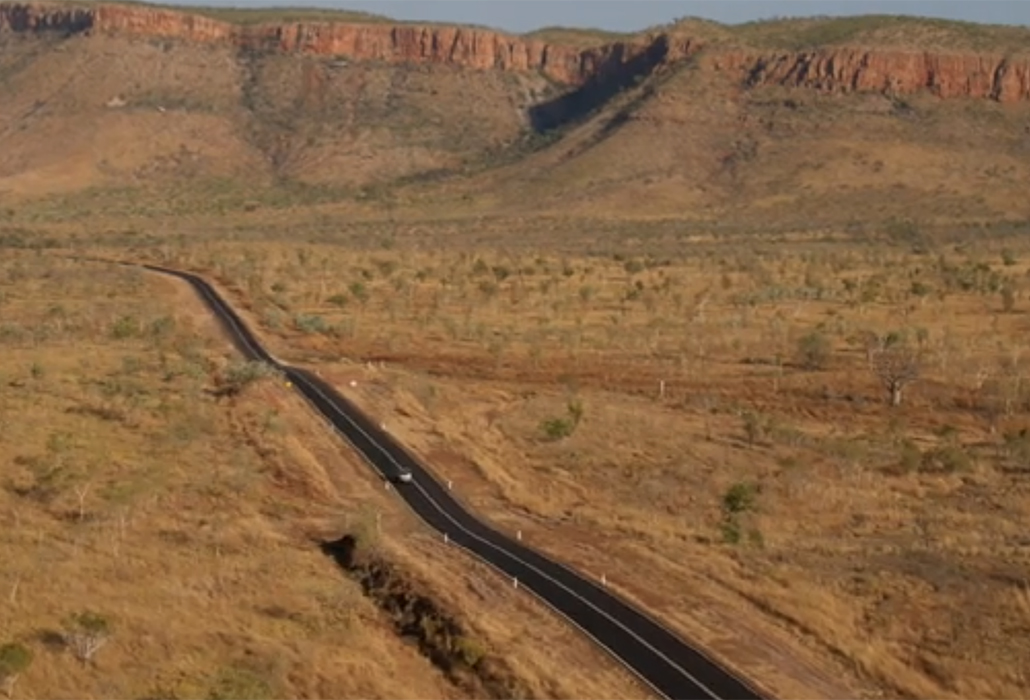 The greatly anticipated six- part television series Mystery Road started on ABC TV on Sunday June 3, 2018, bringing to life a story about interaction politically, socially and culturally between the blackfellas (yolngu) and the whitefellas (balanda), in the small outback town of Patterson in remote Western Australia.

One of each of their own, Detective Jay Swan (Aaron Pedersen) and local copper Senior Sargeant Emma James (Judy Davis) are an unlikely pairing, brought together by the public justice system they serve to the best of their ability.

They both know many people will be hurt along the way by their joint investigation, and most especially by its outcome, so they need to tread carefully. 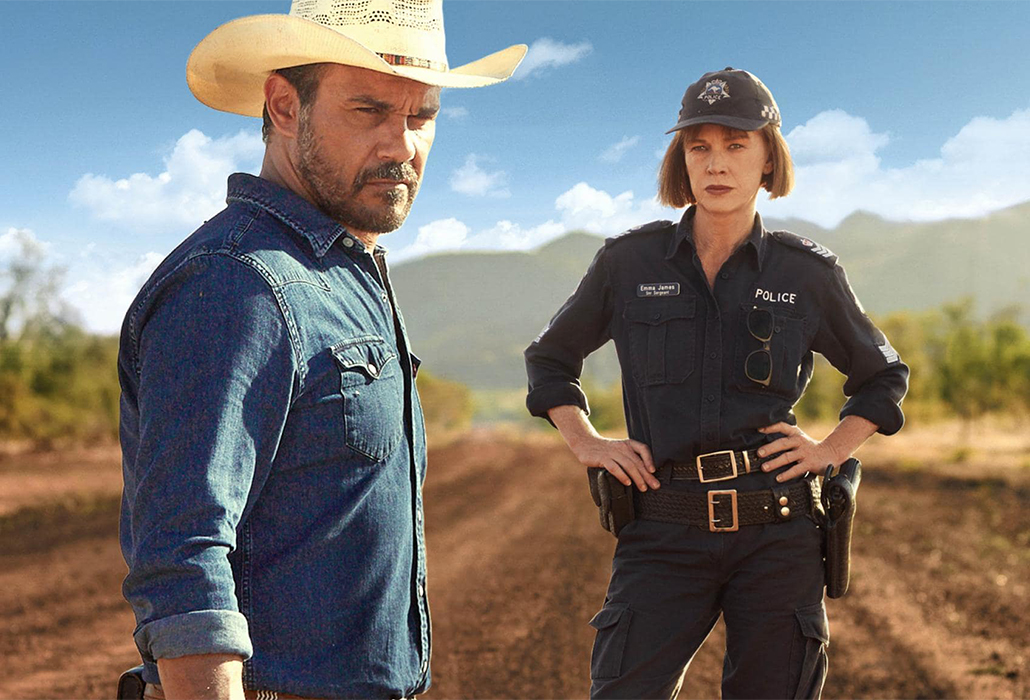 Sharing ideas and stories between Australia’s indigenous peoples and those immigrants who arrived here after 28th April, 1770 is meant to encourage each and every one of us to open our hearts.

Especially if we are to stem the tide of indifference between human beings who misunderstand each other; their motives, including their jealousies, their violence and most especially, their fears.

Bringing the truth into the open is often the only way to begin a real healing process both personally, and in community for the greater good. As always however, truth can have many shades of grey, dependent on who is telling the tale. 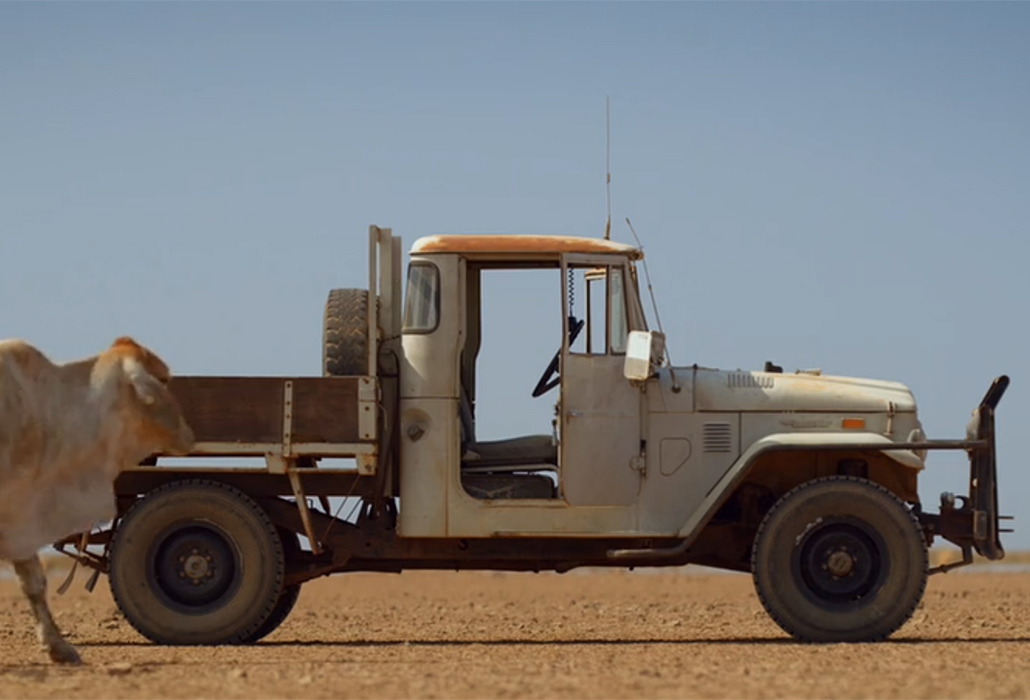 Jay and Emma are both seeking to know why two young men working on Ballantyne, the region’s main pastoral property, have gone missing.

Ballantyne is run by Emma’s brother Tony (Colin Friels) and the utility they were driving has been found abandoned on parched drought stricken land, with no sign of the missing boys.

For the locals Jay Swan’s arrival is like opening Pandora’s box again, letting the evils and miseries of their local world fly out to afflict mankind. There are just too many hurtful stories they would all prefer were kept private. 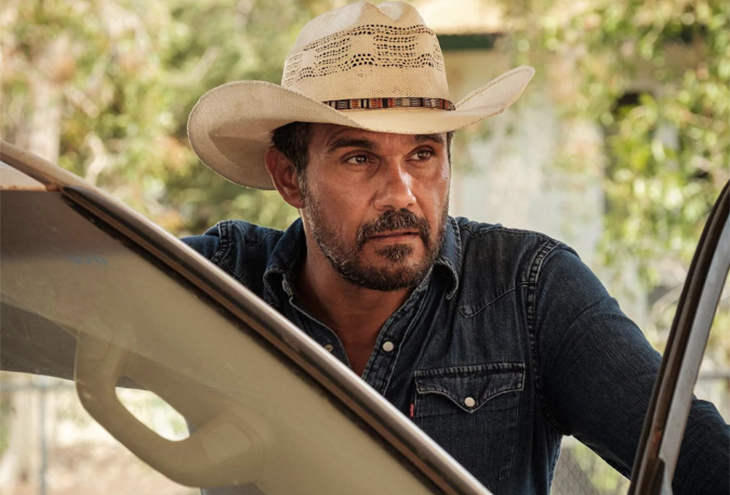 At first our two principals have a prickly relationship, one which has to be addressed quickly, if they are to begin to trust each other to get the job done. 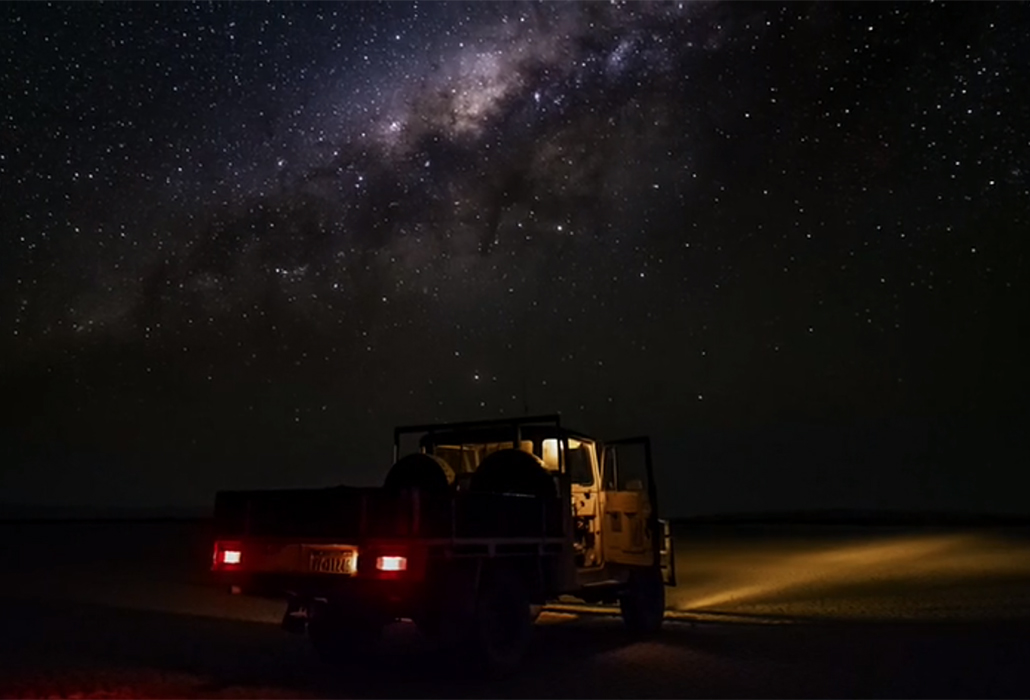 Mystery Road is visually sumptuous television viewing. Each location is chosen with infinite care. The impact of each scene is like a great work of art, both the beauty and the solution to the puzzle is in the attention to detail.

One old rusting tin shed sited next to a cavernous old eucalyptus, whose trunk enshrouds a hollowed out cave, is an extraordinary statement of man’s intervention in the natural beauty of the outback Australian landscape.

Acclaimed director Rachel Perkins and cinematographer Mark Wareham bring their vision of the spectacular daytime landscape of Australia’s East Kimberley and its stargazing night sky to life, with such loving care and style. 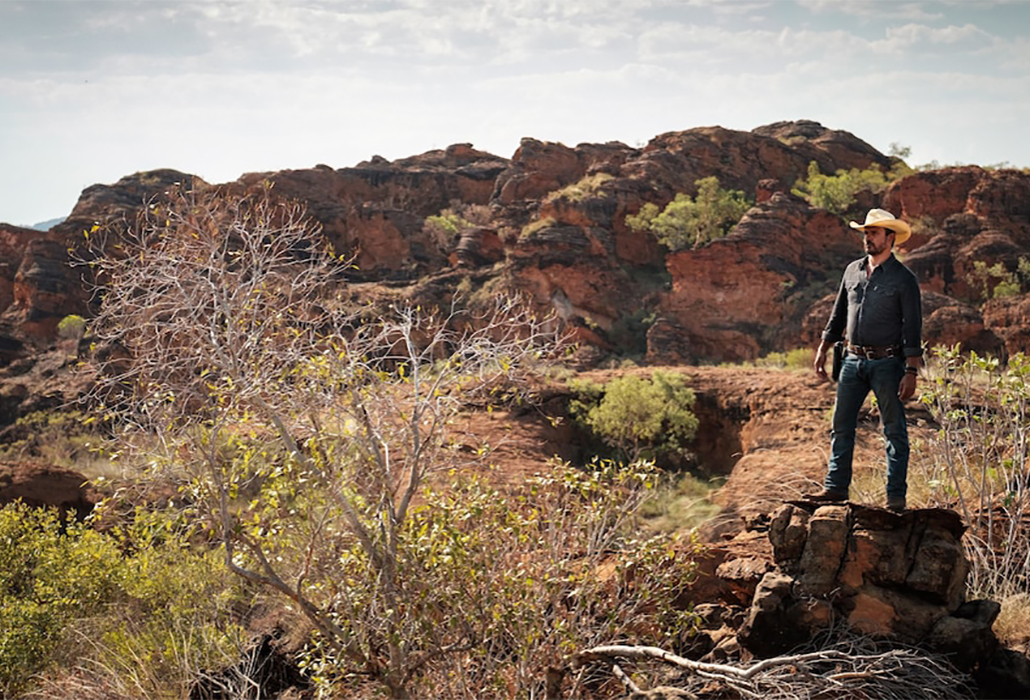 Aaron Pederson as indigenous detective Jay Swan is integral to the society he finds himself investigating, using his own moral judgment and detective’s nose for finding clues to follow, despite the angst he is given by some of his own people. He has a foot in both camps, community and professional and his decisions also impact on his own family life.

When he arrives in town requested from down south by Emma to assist her local police team in their investigation, he sets a lot of hair standing on end locally. After all they know he killed six bikies on his way to finding the truth for his last case, which has become a bit of a legend as he has too. 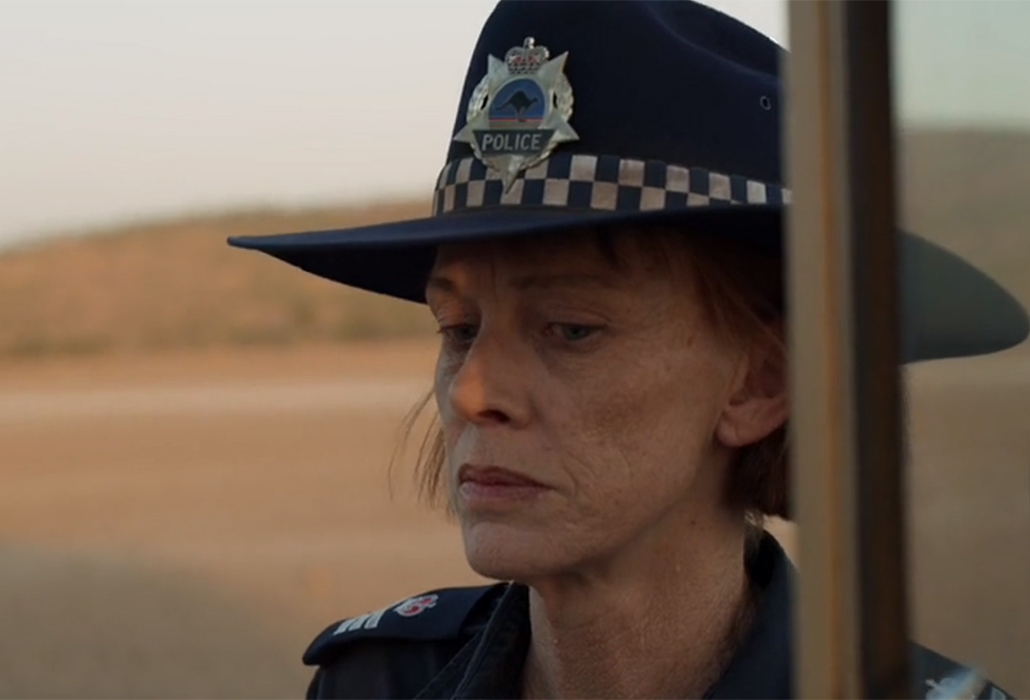 His arrival certainly stirs the pot at a time when Emma and her colleagues at the station Vince Pearce (Ben Oxenbould) and David Sharma (Rohan Mirchandaney) feel like they have already hit a brick wall as the clues at first, are few and far between.

Mystery Road offers its Australian Story of the reality of human misunderstandings and fear as a metaphor that should not be overlooked by our political and societal leaders. It cuts to the heart of what still divides this country, despite them not wanting it to be so.

You can binge watch Mystery Road on ABC iView as I did after watching the first two episodes. I didn’t want to stop until I had the solution, so engrossed was I in this outstanding drama series of the very best kind. 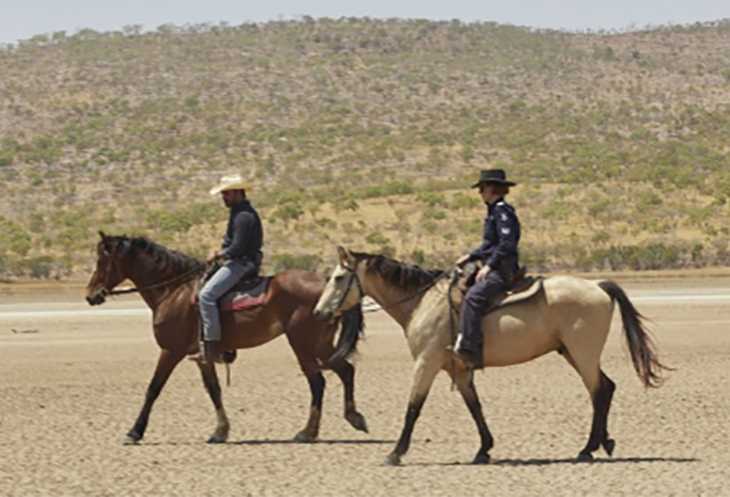 Goodness, what more can you say about Judy Davis and Aaron Pederson, about their abilities and their artistry, that hasn’t been said before.

Watching them both interacting is a real joy; they are completely engaging as they cope with the underlying ‘menace’ that runs beneath the surface of this town.

It’s they’re sensitivity, and acute understanding about what silence can bring to the equation. Above all, it’s they’re intuition about human behaviour that helps this ambitious tale of secrets to slowly but surely unravel. 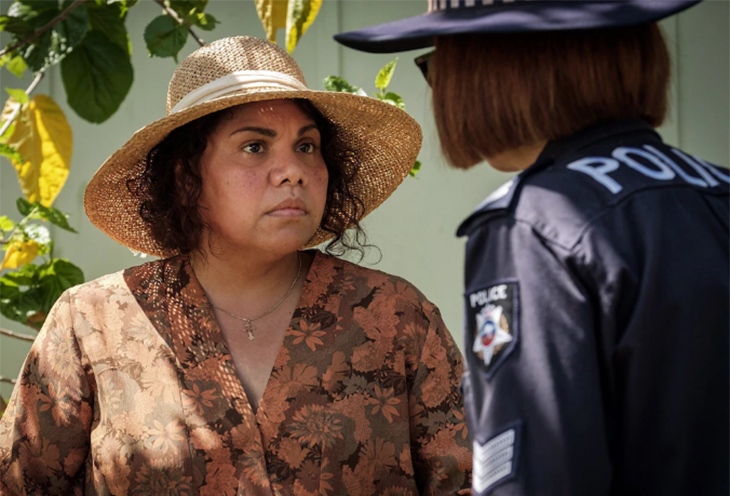 Perkins skilfully guides all her actors, who allow you to feel part of the local community, observing the scene as they set it so skilfully. They include Aussie stalwarts such as John Waters, Deborah Mailman, Tasma Walton, Ernie Dingo, Wayne Blair and Anthony Hayes, to name a few. 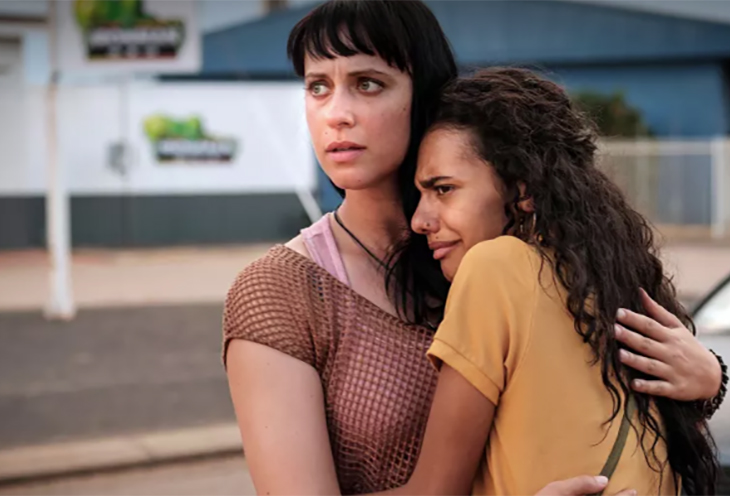 Swan’s daughter Crystal (Madeleine Madden) captures attention as she forces her father to juggle his parental and professional duties, as well as face off with his somewhat estranged wife (Tasma Walton).

There is also a tribute to young NIDA hopeful Jessica Falkholt, who featured just prior to dying so tragically earlier this year. 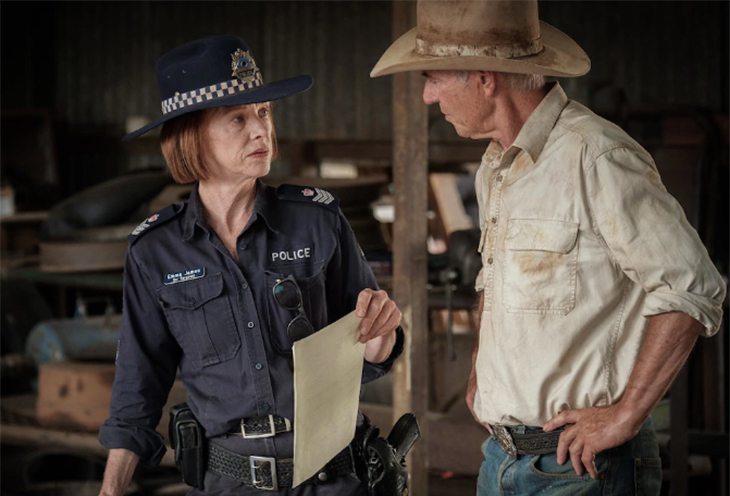 Mystery Road is not a polite conversation. It infuses us in a relationship that by the end of Episode 6, as Jay and Emma solve the mystery and bring the guilty parties to justice.

You are left to hope telling this tale will bring about new beginnings for all.

Binge  it on iView

“Jo Bayley is not only the fashion elixir – she is an elixir of life. She is like a breath of fresh air guiding us all in fashion and style. Her passion is contagious – she wants us all to feel and look the best we can. She is stylish…