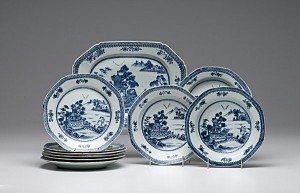 Emperor Kangxi (1662-1722) of China was a patron of classical studies, a poet and calligrapher. In 1682 he ordered the reconstruction of the ceramic kilns at Jingdezhen, which had been partly destroyed during the early years of the dynasty. This was when Charles II (1630 – 1685) was on the throne of England and Louis XIV (1638-1715) on the throne of France. Kangxi attracted the support of intellectuals establishing a relationship with Europe through the activities of French Jesuit priests and various foreign missions becoming established in China. Porcelains were transported to England and Europe by river going down the Yangtze to Nanking and then around to Canton, the only town in the Chinese Empire open to Europeans at the time. Nanking ware was a term given often to pieces produced at Jingdezhen with decoration on the glaze.

The Magnificent Trees of New York Botanical Garden represent many lands and cultures, are beautiful and benefit New York and its built environment in many ways