Men in replicas of historic French military uniforms, illuminated signs and, one of the greatest Mercedes Benz cars ever were all present while scenes from the French Revolution, the Battle of Ratisbon, the beheading of Marie Antoinette and the opulence of the Palace of Versailles were being projected onto the exterior walls of the National Gallery of Victoria (NGV). They greeted the guests arriving for the opening night celebration of the NGV Winter Masterpiece Exhibition 2012 Napoleon: Revolution to Empire of which I was fortunately one.

The illuminated projection, complete with sound effects and music, was an exciting first on the huge bare walls of the gallery that face the very busy St Kilda Road. They hope to use them again for more such sound and light displays in the future. It certainly added to the empirical ambiance.

It was a great privilege to be there and to hear the witty and wonderful speech full of pathos and humour delivered by His Excellency Mr. Stéphane Romatet, Ambassador of France to Australia. He only arrived in Australia last November and if his speech was anything to go by, he will certainly build on the already fine and historic relationship Australia has with France and most especially Victoria, which at one stage of its early development was actually named Terre Napoléon.

This was also the opening of the retiring show for NGV Director Gerard Vaughan. His premiership of 12 years saw significant changes at the Gallery, including transformation of the iconic gallery keeping intact its two much loved features, the giant glass water wall, resplendent with a golden wreath encircled “N” last night, and the coloured stained glazed ceiling of the great hall. It was Vaughan who also brought about the debut of Victoria’s Winter Masterpieces, bringing blockbuster exhibitions such as this one to Australia. This was a fitting tribute to his vision and he leaves behind a wonderful legacy for the incoming Director Tony Ellwood. 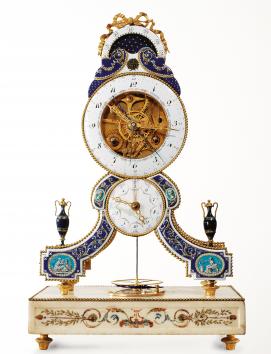 The crowd were mostly playing it safe in suits and black frocks, which is the understated Melbourne way. Vaughan looked very happy when he announced at the end of the speeches, that the Lord Mayor and the Council of Melbourne had pledged to sponsor the costs of late night openings for the show – keeping it open for 24 hours on the days of the final weekend.

The Fondation Napoléon at Paris lent a great many of the items on show, along with the Château de Versailles and Château de Malmaison, Josephine and Napoleon’s home outside Paris. There are paintings, drawings, sculpture, furniture, textiles, porcelain, glass, jewellery, clocks, boxes and armour and all around you the passion for the arts, sciences, literature and the couples interest in Australia is clearly evident.

Fondation Napoléon President Victor-André Masséna, Prince d’Essling was there and complimented the efficient and dedicated team of curatorial and administrative staff at the NGV, acknowledging they were a wonderful group to work with over the five years this exhibition has been in the making.

The show was truly incredible, outstanding in so many ways and, first and foremost, a surprisingly intimate portrait of the power couple Napoleon and Josephine, the people in their circle and the notable connections they both had with Australia, fascinated as they were with its flora, fauna and infinite opportunities.

It is not just about the fact that this is truly serious bling, but about the innate sense of style, the quality of the materials, the splendour of the craftsmanship, which was all quite simply breathtaking. It is also said reams about humanities greatest accomplishments in the fields of painting, drawing, sculpture, design, style and the sciences.

Arriving into the forecourt you were confronted with a colossal bronze bust of Napoleon as Emperor, made originally to adorn the top of an entrance door in the Louvre at Paris. It is a bronze by Lorenzo Bartolini, an Italian who worked in France 1797 – 1807. It was standing on a giant plinth in the centre of the main court. It was immediately evident that Bartolini had a superior understanding of the classical traditions of sculpture inherited from the ancients.

Its fine form was surely honed first in the studio of artist and teacher Jaques-Louis David and its magnificence inspired by similar works of 1st century Roman Emperor Augustus, whom Napoleon so admired. He looks down on you as Imperator and you were instantly drawn into wanting to see what lay beyond.

And what a sight that was.

From the absolutely extraordinary portrait medallion of Louis XV that graces the entrance to the battered poster of the Revolution, surviving almost intact except for a torn corner, Josephine’s truly beautiful shell cameo diadem, Napoleon’s opulent portrait as King of Italy, the incredible quality of the porcelain by Sévres, the myriad of simply superb objects that take your breath away, and the poignant lock of Napoleon’s hair taken after his demise in exile on St Helena, this was be surely one of the greatest shows of decorative arts and memorabilia ever displayed in Australia.

It was entirely appropriate that they opened the celebrations with Napoleon’s favourite fanfare played on trumpet. Throughout the display the stirring music composed for Napoleon’s coronation was also playing. The score we find out was only rediscovered as recently as 1965 and it echoed with the resounding sounds of pomp, circumstance and the pride of Empire.

It must have been an extraordinary ceremony, based as it was on the coronation of Charlemagne (742-814).

Napoléon commissioned Giovanni Païsiello (1741-1816), a composer he deeply admired to complete music for the Mass and Te Deum, while Jean-Francois Lesueur (1760 – 1837) composed a march and some motets and, the abbé Roze (1745 – 1819) wrote the unforgettable Vivat!

A surprising personal favourite for me was the very fine portrait of Napoleon’s architect Charles Percier. It was painted by the very talented artist Robert Lefévre (1755- 1830). Percier was in part responsible for the creation of the ‘Empire Style’ and this image of him is so very finely drawn, a very intimate encounter, a great study of the face that is very captivating.

Schoolchildren, young designers and students from arts and design colleges viewed this collection and so it should have an ongoing impact.

The catalogue was a splendid publication contributed to by all the curatorial team, headed up by its curators Ted Gott and Karine Huguenaud. The articles, design, the layout and the photographs all reflected the quality of the objects. So if its still available after its over its a worty purchase.

For those that were able personally to view this exhibition for what it was, a truly wonderful celebration of creativity, it is one they will always remember.

It was about how, as Napoleon himself so insightfully pointed out, ‘imagination rules the world’.

Napoleon: Revolution to Empire was at the National Gallery of Victoria, St Kilda Road, Melbourne from June 2 – October 7, 2012 and generously supported by The Ian Potter Foundation and its many Patrons and Sponsors

Through the centuries horses contributed to the cultural development of nearly every country on earth and in art, in flight and in life certainly enriched it