Despite the many means available to researchers today public perceptions about Napoleon Bonaparte (1769 – 1821) and his significant achievements in many sphere’s of influence still remain ‘out there’ and largely unknown.

Perhaps it is because of the continuing memory of the fear, terror and dread he left in his wake as he embarked on a lifelong career as a soldier, lover and imperial head of state, while being revealed as one of the most complex human beings in history. On a daily basis we use the mathematical system Napoleon devised in 1805 for numbering houses in the streets of Paris.

Even numbers on one side and odd numbers on the other side of the street, starting near the water, which in his case was the River Seine, which wound its way through Paris and in Melbourne’s case where I live, the River Yarra. It was a logical simple way of bringing order out of chaos in the city and the idea quickly caught on around the world.

The glamorously perceived power trip that Napoleon and his first fashion forward wife Josephine embarked on together meant that in their age they became names as well known as Cleopatra and Julius Caesar had been in theirs.

This is a good parallel to draw because knowledge about both ancient Rome, especially the 1st century period, as well as the lure of knowledge about ancient Egypt were both abiding personal passionate pursuits for Napoleon. Map of Australia showing the south of the continent, including Victoria as missing

Invitations to the soirees held at the Chateau of Malmaison nearby to Paris, where Napoleon and Josephine bedazzled everyone with both their bounteous bling and beauty, must have been a highpoint in many people’s lives. His great and glorious expedition to Egypt may have failed in a military sense, but in hindsight perhaps it was his greatest triumph.

By taking 200 scholars along with his military personnel on this amazing journey he brought the art and archaeology of the ancient world into the present, starting an obsession with finding its art and treasures that would last for well over 150 years.

His political ambitions influenced the course of the history of our world and the code of laws he passed, the changes to the metric system, the commercial transportation system and institutions everywhere, like his street numbering system are all still in evidence today. Napoleon was entirely fascinated with the lure of the ‘South Pacific’, from the stories regaled during his youth.

His imagination could be employed to believe that over there in the antipodes perhaps was a Garden of Eden where civilisation could begin and thrive all over again. Today most Australians would agree with him. Napoleon and Josephine both engaged brilliantly with Australia. Josephine, as a woman of influence, had a great glasshouse in the grounds of her Chateau at Malmaison where she propagated and cultivated many varieties of its exotic plants, the like of which had never been seen in Europe before. Her symbol and favourite bird the ‘black swan’ from Western Australia swam about on her artificial lake together with Europe’s pristine white swans. Kangaroos and emus became prized possessions in her private zoo and they also decorated her China. She began importing plants in 1800 and in 1809, the year of her divorce from Napoleon, he presented her with some 800 plants and hundreds of seeds.

The Australian plants tended at the Chateau Malmaison were distributed all over France following her death, particularly along the Cote D’Azur and other countries around the Mediterranean.

As a leader of fashion in every sense and style her clothing was copied by modistes all over France.

Consequently what she grew at Malmaison, other people wanted too.

The first Australian plant grown in Europe was at Malmaison and given the name Josephinia Imperatrcicis. Inheriting his Corsican mother’s stoic nature, and grim determination to surmount all odds and overcome all obstacles, Napoleon survived grim years of boarding at the Royal Military School in France on a scholarship obtained by his father for him at the ‘king’s expense’.

It was 1779 when he was only nine years of age that he donned the uniform of light blue jacket with red cuffs and dark blue breeches, to enter the doors of the domain that would change his life.

Rebellious, serious and outspoken he excelled at geography and mathematics, both perfect disciplines for a future military leader. He endured the years in isolation from his family and their support by focusing on his studies, gaining some measure of release at first by beating on bigger classmates.

It was not until 1784 that he graduated and began his years as a ‘gentleman cadet’ in the École Militaire at Paris. This experience was even stricter and more sinister, if possible. 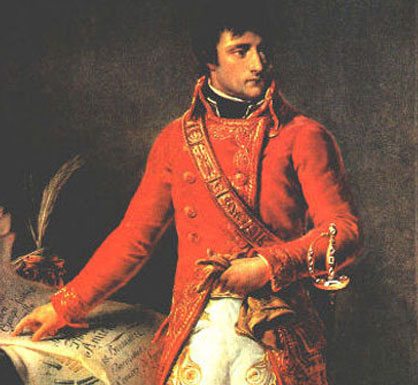 He lived in a tiny monk’s cell where the day started at 6:00 am and officially ended at 8:30 pm back in his room. His instructors were given the order to ‘civilize this dangerous islander’ with the large chip on his shoulder, which proved a tall order.

It was his artillery examiner Louis Monge however who believed he had discovered the real man behind the face of the deeply troubled boy, noting in a report that still exists, he ‘merits our consideration and help’. 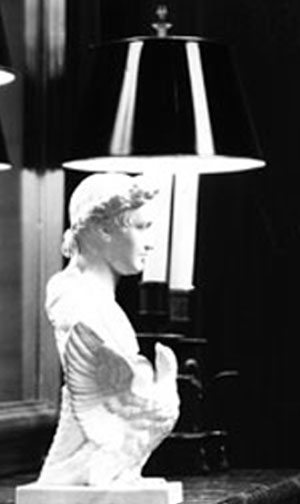 Napoleon Bonaparte had a real hunger for expanding knowledge and from his student days onward he privately researched the history of England, of Europe, the ancient Persians, the Greeks and Romans, the history of Turkey, the government of India, the Assyrians and Aztecs, while studying the ‘philosophical and political history of the European commercial developments in the East and West Indies’.

His appetite for study was insatiable and the countless essays he wrote reveal a fertile mind that could not ever be sated. He often suggested to his superiors ways of improving military strategy, supporting some theories with mathematical proof.

As a young man he despised the arrogance of power and protested the outrageous acts committed against the downtrodden, although in his lifetime he would outdo all other leaders in world history for savagely disposing of his nation’s enemies.

Napoleon proved time and time again, through the numerous notebooks that he filled with his thoughts and essays, that he had an ever-abiding interest in new discoveries. His intellectual interests played an active role in everything he did or achieved.

He just did not want to conquer the world, but contribute to history and the advancement of civilisation. 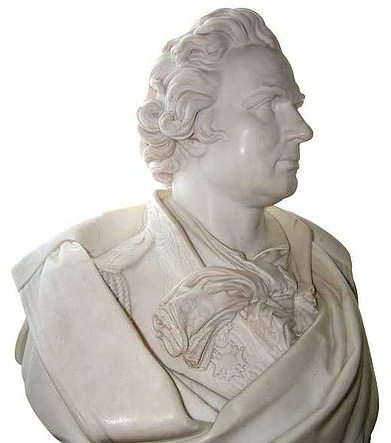 The discoveries being made in the southern hemisphere, and in particular, the land now known as Australia, caught his attention.

At first it was the French explorer Marc-Joseph Marion Dufresne (1724 – 1772) who had a distinguished career in the French navy before heading off into the Indian Ocean to observe the transit of Venus in 1761.

In 1772, when Napoleon was only 3 years of age, while on a voyage that he financed in the South Pacific Dufresne rounded the most southerly point of Van Diemen’s Land.

This small land mass is south of the Australian mainland, and he claimed it for France. On going ashore, he and his party became the first Frenchmen to reach that part of this Antipodeans paradise. They were also the first European explorers to encounter the native population and the first to kill an aboriginal. Another Frenchman navigator Louis Francois de St Allouarn also claimed the west coast of Australia for France in the same year.

When he was 16 in 1785 Napoleon wanted to join the expedition of La Perouse, who sailed with two ships, the Boussole and the Astrolabe out of Brest, visiting the newly founded penal colony of Port Jackson on the coast of New South Wales. There he left dispatches to be forwarded on to France. Then the two ships sailed away never to be seen again.

Plant exploration was so important it became a matter of state in France when botanist Jacques-Julien Labillardiere (1755–1834), who was a republican sympathiser that had studied with England’s famous botanist Joseph Banks, travelled to the antipodes in search of the lost La Perouse expedition.

He returned to France in 1799 and, a republican sympathiser, Labillardiere settled in Paris and began working on the first major account of Australian flora ever to be published. Two illustrated volumes appeared in Paris in 1804 and 1806. Josephine by this time was busy growing Australian plants at Malmaison.

Lewis Kennedy of London supplied her with many of the specimens she cultivated and she had the Kennedya rubicunda from Australia named for him. However Napoleon’s ambitions for the South Pacific had to wait until he had become First Consul of France in 1800. This was when explorer Nicolas-Thomas Baudin (1754-1803) proposed an expedition to Australia and Napoleon agreed.

With 22 naturalists on board two ships Géographe captained by Baudin and Naturaliste captained by Jacques Hamelin set sail. Napoleon authorised Baudin to explore, to chart and to claim Australia’s southern coast and call it ‘Terre Napoleon’, which he did.

The results of Baudin’s voyage were disappointing and tragically Baudin died of tuberculosis on the way home. The most tangible outcome was the delivery of Australian plant seeds in 1804 to the Empress Josephine by Captain Hamelin, who had brought home the collections and documents from the voyage. Josephine successfully grew many of these seeds, including the spectacular Hibiscus heterophyllus.

Importantly, 100, 000 zoological specimens were collected and published in a series of volumes and atlases after 1807. Scientists, artists, gardeners, zoologist Francois Peron and naturalist and artist Charles Lesueur also undertook this extremely hazardous journey and conducted the first study of Aboriginal people on what was a landmark expedition.

Waterloo, the victory of the English over the French in 1815 would shatter all Napoleon’s dreams, both political and personal. Today it is we who are left to imagine just how much they may have occupied his thoughts while exiled on the island of St Helena where his life would end, having been slowly poisoned by a Frenchman he considered his closest companion and friend. Perhaps the only ray of sunshine was the relationship he established with Betsy Balcombe.

At Mount Martha on the Mornington Peninsula in Victoria The Briars homestead and park was originally the home of the Balcombe family who gave Napoleon Bonaparte a place to be when he first arrived on St Helena in 1815. Because they had shown him so many kindnesses, especially young Betsy Balcombe, Napoleon gave the family gifts and mementoes, which they kept. This included Napoleon’s Desk. Their descendant Victoria’s grand Dame Mabel Brookes in 1959 bought back her ancestors original St Helena house and gave it to the French government. She also further expanded the Napoleonic collection and in 1975 left some 300 Napoleonic objects, including the guitar he took to St Helena, a copy of his death mask and a lock of his hair, to the National Gallery of Victoria

Revealing how important art and imagination are during times when life is far from ideal, Goodbye Christopher Robin could easily have been named Saving AA Milne