Eugene von Guérard was arguably Australia, and certainly Victoria’s most important colonial landscape painter. Many of our major galleries have works by him in their collection.

Fern tree gully in the Dandenong Ranges was some 40 kilometres from Melbourne. It was dense bushland, a temperate rainforest with cool fern gullies. He visited the region twice betweeen 1855 and 7 and again in 1858 documenting this lush, and largely unexplored region.

This work stimulated conversation in Melbourne among those interested in his meticulous observation of nature and the magical environment he created for two lyre birds courting. This, and his other works from this period are remarkable in their superb detail, something that would have been influenced by growing up with a father as an artist who specialized in miniatures, an art form that requires great attention to minute details.

Johann Joseph Eugene von Guérard (1811-1901) was born into a family whose father Bernard Von Guérard had already found favour at the court of Emperor Franz Joseph 1 of Austria as court painter. He sent his son to study at the Academy in Düsseldorf and later at Rome and Naples.

Eugene von Guérard exhibited regularly at Leipzig and Berlin. He became part of the tradition of romantic landscape painters, for whom all the details were important as they led to an awareness of the divine qualities perceived in nature.

Each work was a celebration of reverence of its untamed aspects, its wild beauty and awe inspiring presence.

His arrival in Australia in 1852 was about seeking his fortune.

He contributed a great deal to our collective knowledge today about life on the goldfields during the Victorian gold rush period, through the illustrated journal he wrote and drew in daily. In it he painted nature suffering under the onslaught of man’s intervention as gold, and getting rich quick became the only focus. However luck was against his endeavours to become an overnight millionaire. Fortunately for posterity he resumed his painting career, recording the landscapes he encountered as he traveled through Victoria in the mid 1800’s.

He took on commissions for wealthy pastoralists, recording their properties and their dwellings.

He recorded a view of Port Phillip Bay from Beleura on the Mornington Peninsula for its owner at the time, James Butchart, of the ‘Beleura’ homestead built in 1863. Von Guérard shows the sweeping views from the property across the bay – an area that had become a popular holiday destination for Melbourne residents. He painted the Australian landscape from the perspective of an observer, an explorer and as a resident.

At St Francis’s Church, Melbourne, on 15 July 1854 he married Louise Arnz of Dusseldorf and by the early 1860’s was considered the foremost landscape artist, and integral to culture in the colonies.

In Melbourne his first years were very difficult and in 1855 he tried to sell many paintings by lottery.

Putting bread on the table daily became a struggle when he occupied studios in Collins and Bourke Streets in the 1850s, and he lived for nearly twenty years in Gipps Street, East Melbourne.

He was an active founder of the Victorian Society of Fine Arts, and in January 1857 the only exhibition it held, included his views of Mount Abrupt and Hobart Town.

The News Letter of Australasia in January 1858 criticized his ‘very peculiar’ style. It also opposed the purchase of ‘M. Guerard’s fine picture of Fern Tree Gully … for … the Queen’.

Although few locals would subscribe for the painting, Queen Isabella of Naples later bought two of his early works and many others went to Dusseldorf, America, Natal, England and on show at exhibitions in Paris, London and Vienna. 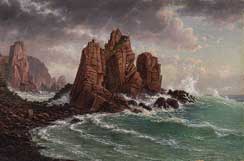 von Guérard was interested in geography, geology, the topography of the land and its vegetation. His representations of the forests of the Gippsland and the Otways, as well as the crater lakes of Victoria’s volcanic Western District and peaks of the Kosciuszko plateau today hold important environmental significance. He traveled to New Zealand seeking images of the sublime and picturesque.

During his lifetime Sydney and Melbourne, in particular, were full of people from other parts of the world who came to encounter new ideas, the colonial culture, its art works and sciences, that together with its religious and political philosophy injected a cosmopolitan liberal air into its high society.

This was despite the fact that barely beyond the township limits the wilderness and bush were present, as harsh and unforgiving as it had always been since the European arrival in Australia in 1788. 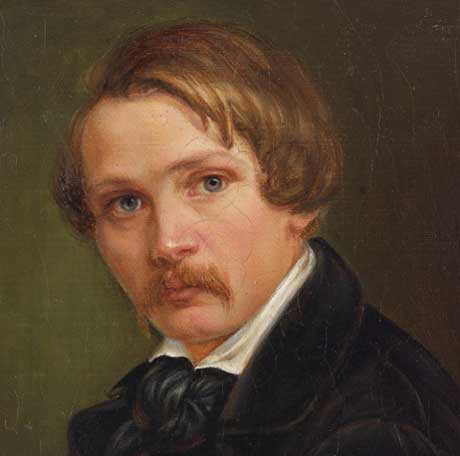 He took on job as curator at the National Gallery of Victoria and became the first Master of Painting at the associated National School of Art at Melbourne.

For over a decade he influenced the rise and work of other artists. Frederick McCubbin and Tom Roberts however were off on other tangents and his inability to be flexible to change in style caused difficulties.

He resigned from the NGV at the end of 1881, departing for Europe the following year. His wife died in January 1891 and when the Australian banks crashed in 1893 he lost all his investments, living and dying alone in poverty in Chelsea at London in 1901. He was survived by his only child, Victoria, who had been born in 1857 in Melbourne. She married and remained in Europe.

Described by William Strutt as ‘delightful’, von Guérard had great physical endurance to undertake the long and arduous journeys he did to record nature. He was a member of that ‘charmed circle’ of writers, artists and bon viveurs active in the right Royal society of Victoria,  where he served on its council between 1866-67.

He was fluent in English, French, Italian and German, but signed his name in the German form. In 1870 the Emperor of Austria awarded him the Cross of the Order of Franz Joseph.

Eugene von Guérard made an enormous contribution to the history of Australian art.

Watch the Video by the National Gallery of Australia