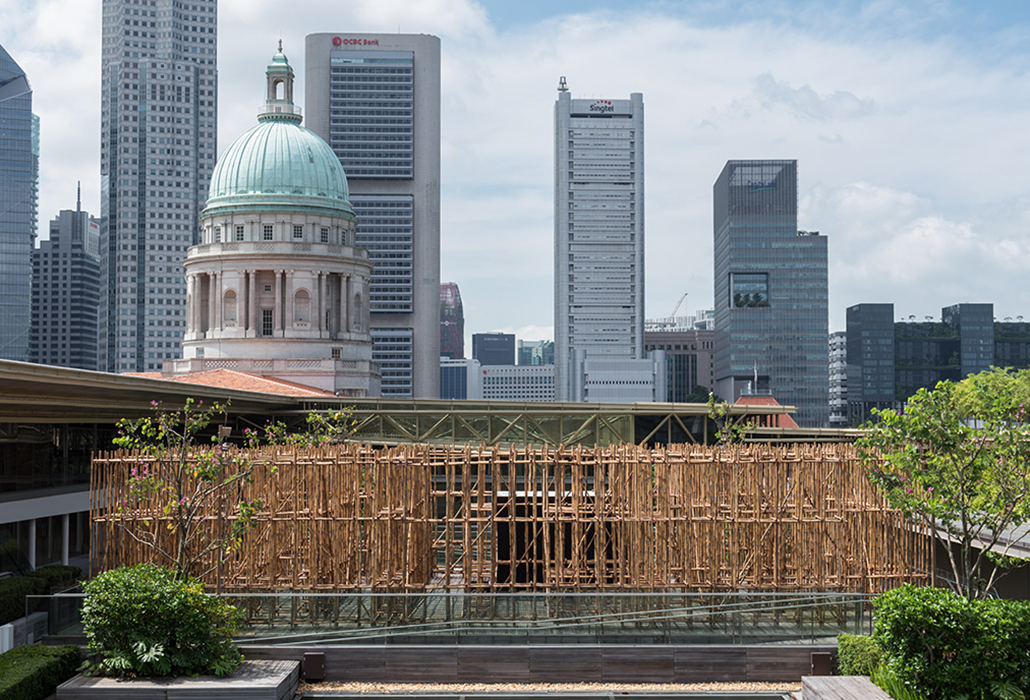 The National Gallery of Singapore, South East Asia’s leading cultural institution, has collaborated with internationally renowned and raised artist Rirkrit Tiravanija, to produce a large bamboo maze installation, which is now on show at its Ng Teng Fong Roof Garden until October 28, 2018.

Rirkrit Tiravanija lives in New York city and specialises in creating social spaces and platforms for instruction and discussion. His works are represented in many great art galleries of the world. 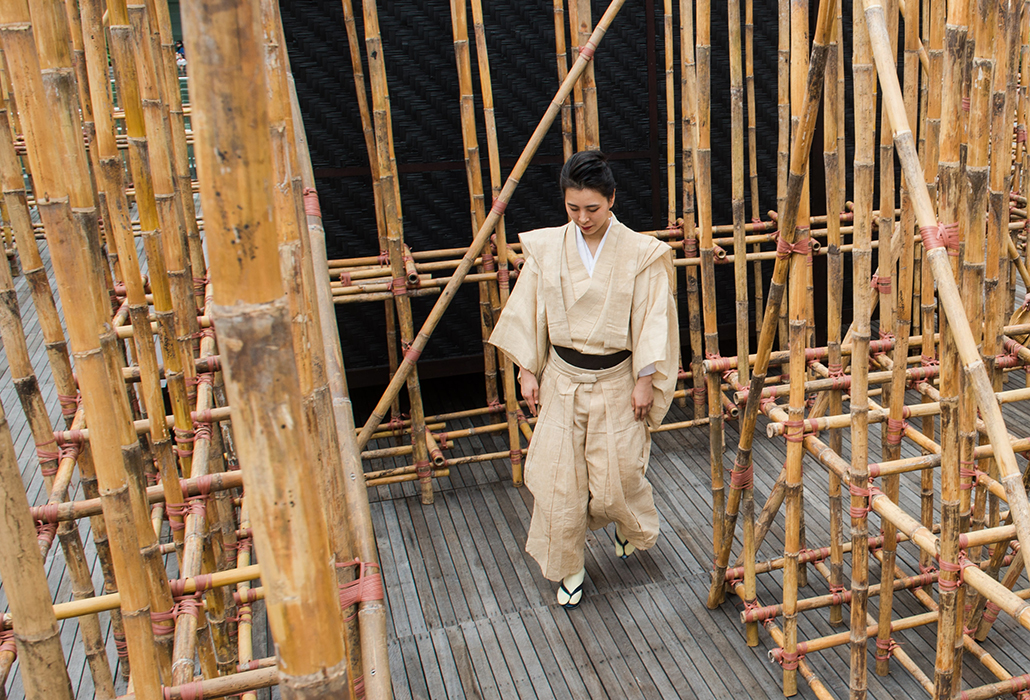 Visitors are invited to navigate through the bamboo maze as they go in search of the Japanese wooden tea house with all its associated symbolism at its centre. It is a place where performances and conversations can take place throughout the display. 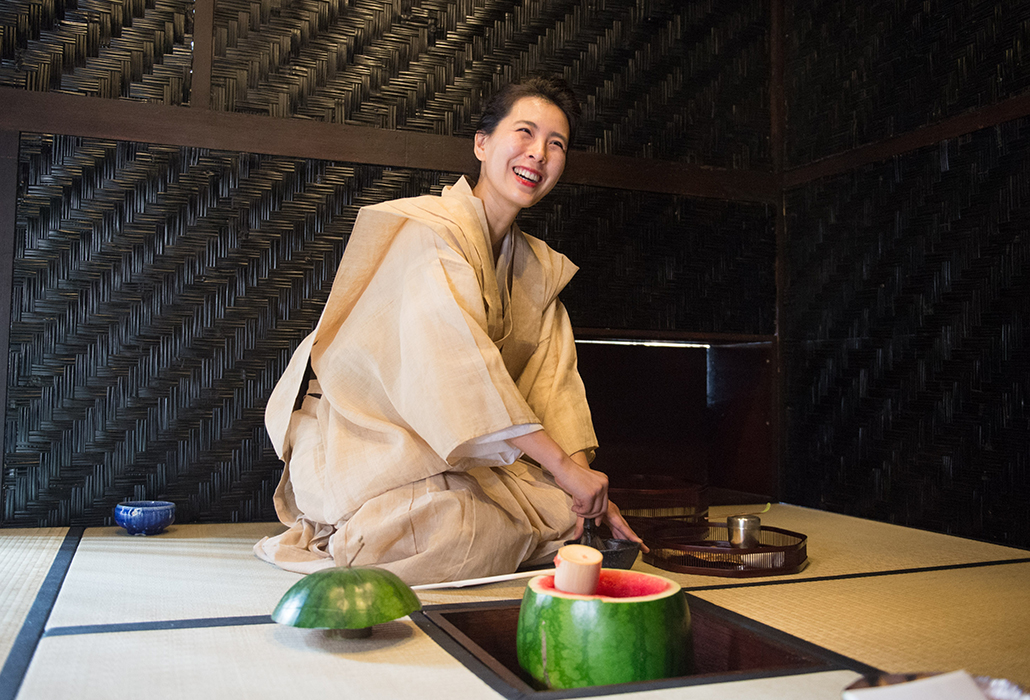 ‘Thank God for Tea! What would the world do without tea. How did it exist? I am glad I was not born before tea’.

The focus on participatory works that blur the line between art and its audiences, reveals Tiravanija’s inclination towards the gesture of hospitality – he has stated, ‘It is not what you see that is important but what takes place between people’. 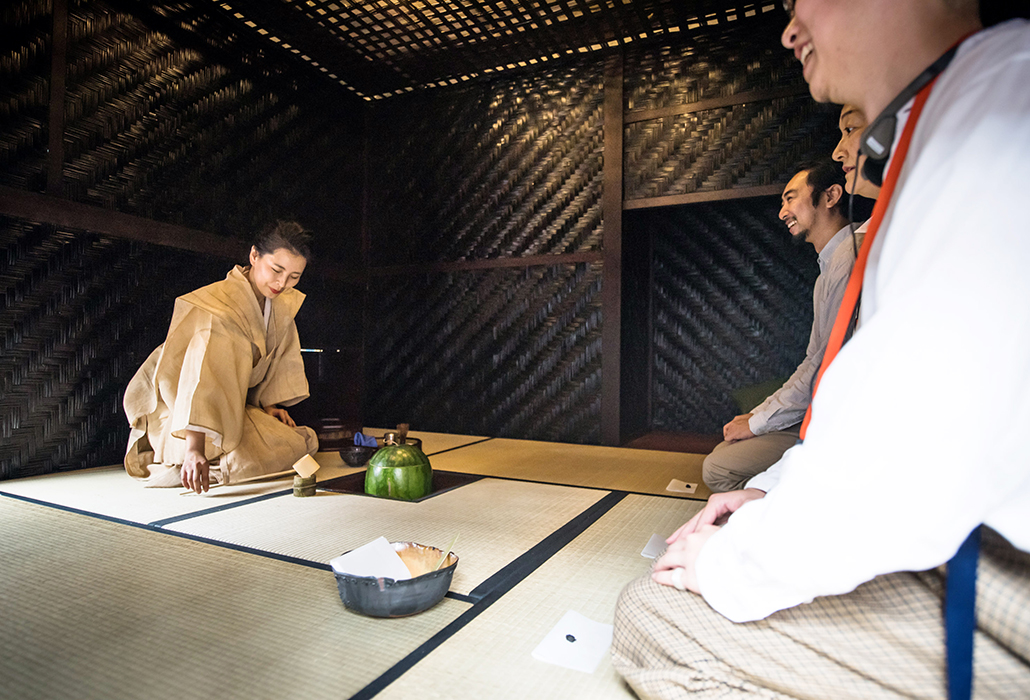 Mr Low Sze Wee, Director (Curatorial, Collections and Education) of National Gallery Singapore, said “untitled 2018 is a testament of the Gallery’s mission to bridge the connection between art and the public, and cultivate an art-loving community.

He also noted that ‘…in working together with Rirkrit Tiravanija – one of the most important and influential contemporary artists of our time, who is richly informed by his own history and experience of Southeast Asia – we aim to present art made accessible and inclusive through its social setting, inspired by Asian culture, architecture and craft. 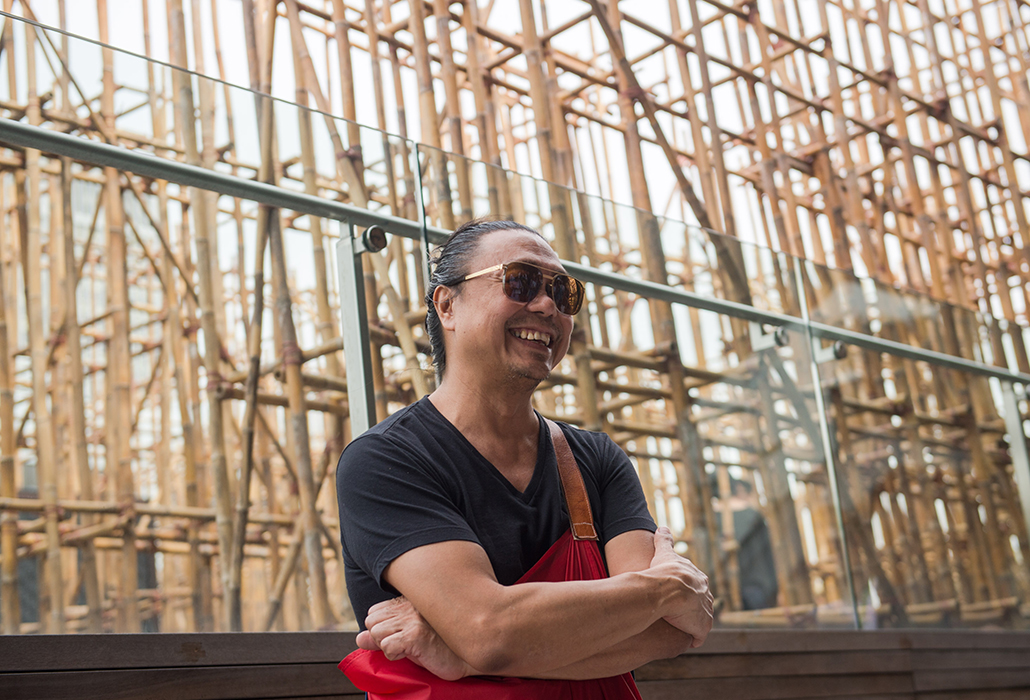 This is Rirkrit’s second major solo project in Singapore and his continuing finding connections between diverse cultures as he constructs communal environments that draw audiences to be part of his work, hopefully creating meaningful bonds between his work and his audience.

Rirkrit Tiravanija was born in Buenos Aires, raised in Thailand, Ethiopia and Canada studying at the Ontario College of Art in Toronto (1980–84), Banff Center School of Fine Arts (1984), School of the Art Institute of Chicago (1984–86), and Whitney Independent Studies Program in New York (1985–86). 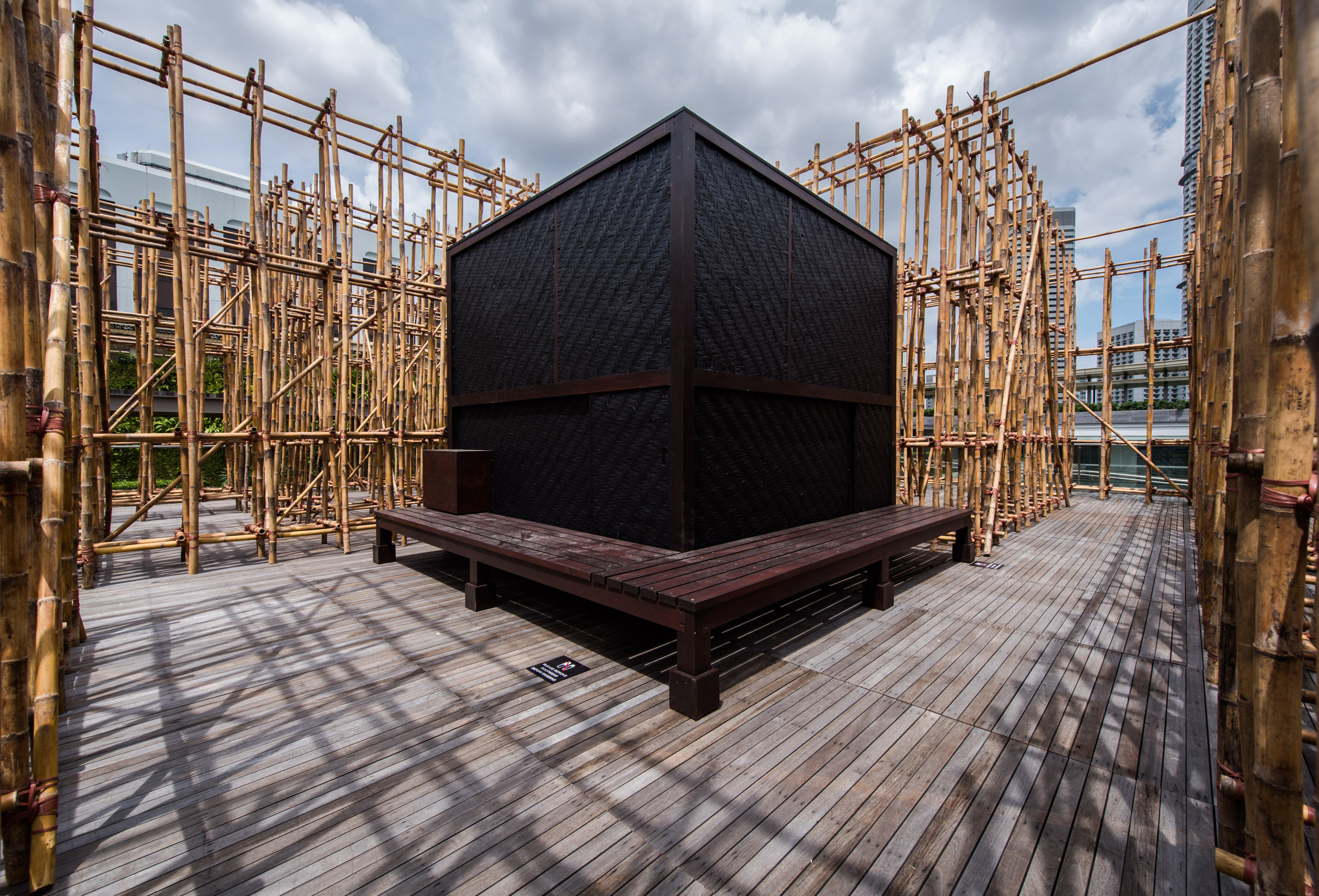 Bamboo has considerable traditions in both China and Japan. The virility of life and art lies in its possibilities for further growth. In Japan formality and uniformity of design was considered fatal to the freshness of the imagination and natural forms became symbolised, suggested or implied as they offered solace to the soul of generations to come.

Bamboo has great beauty and a reputation for its tensile strength, which rivals steel. Chinese culture includes a classic story about three bamboos encapsulating the vicissitudes of life. When the strong winds of difficulty and devastation lay a bamboo plant very low it never breaks, and for that reason alone it is admired and revered. 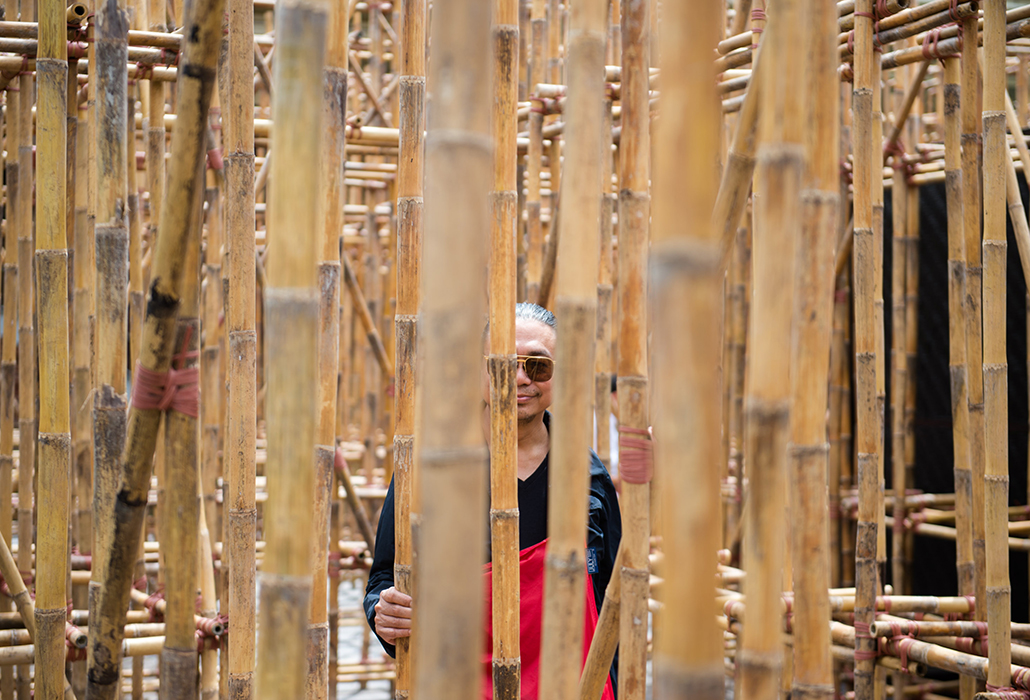 Bamboo in the world of horticulture is classified as a grass, among the most versatile of all plants being hardy and reliable, it imparts both grace and elegance to its surroundings,

Bamboo has many other advantages too, young shoots are eaten, utensils are made from it so we can steam food in it, chopsticks or eating and scholars brushes for calligraphy can be made as well as garden screens either grown or manufactured from it too. 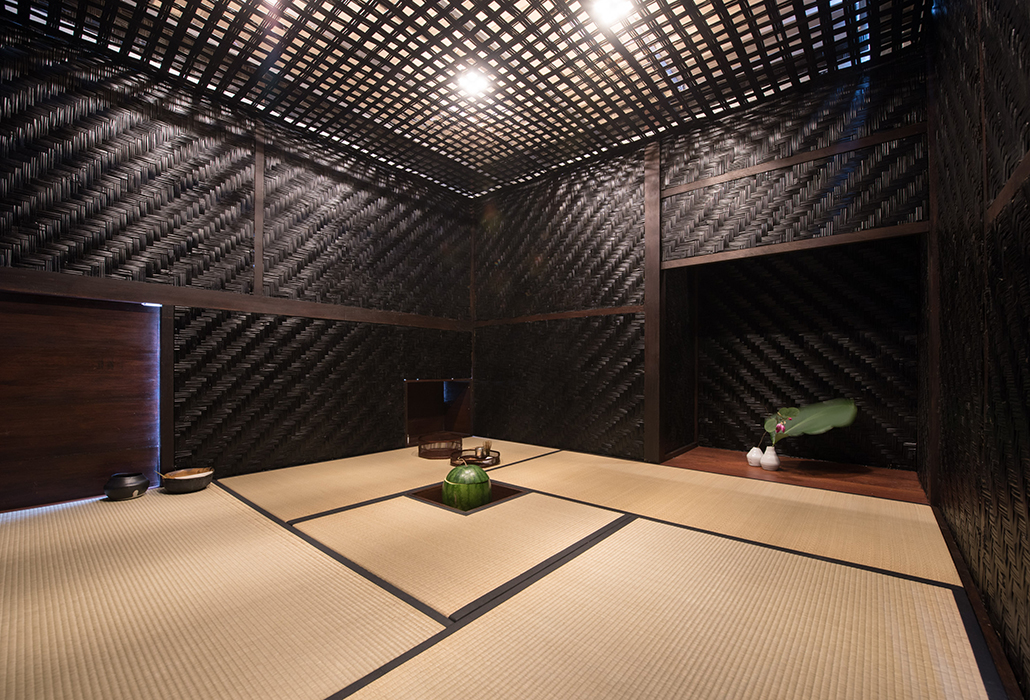 The greatest use however is it can be used in every aspect of construction from floors to furniture and from scaffolding to buildings.

Visiting Singapore soon? This seems to be a special show to see.