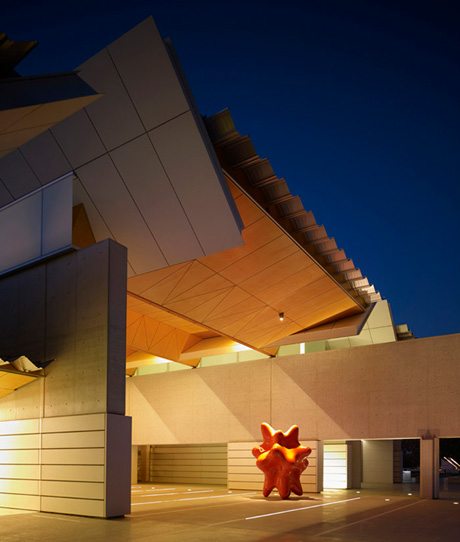 What is a portrait today? How do we judge it? If we know the person was a General, King or Queen will that impact on our view or understanding of it? Is the art of portraiture about providing a perception of a person that the sitter really wanted to be?

This, and many other questions spring to mind when having a face-to-face encounter of the intimate kind with many extraordinary portraits on view at the National Portrait Gallery of Australia, which opened to the public on 4th December 2008.

An architecturally interesting building, whose design was based on the ‘golden mean’, which ensures it has spaces that relate to the scale of the human figure, the contemporary gallery is sited not far from the National Gallery, right next to the High Court of Australia. The Monday of my recent visit was an exceedingly busy day.

People from all walks of life and all backgrounds were, there, young, old, older students studying and sketching, younger students listening to stories about the sitters. It was a heady atmosphere as I browsed each of the rooms named for the founding contributors to this very special place. Marilyn Darling, whose drive and energy helped establish the gallery in the old Parliament house building in 1994, must be pleased with its success.

In the early years, just to bring the idea first put forward by one of Australia’s most renowned painters Tom Roberts in the early 1900’s, Marilyn Darling had to battle hard, bend many an ear, and actively solicit sponsors to help and support the vision for the gallery. She did an amazing job, well beyond self.

A very young institution, sited in Old Parliament House at Canberra from 1994, it quickly became so popular this purpose built gallery became a necessity.

The diversity of the faces on view, as well as the various mediums used to record them for posterity, is entirely captivating.

There were so many to be drawn towards; the arresting oil on canvas portrait 2000 of David Campese II by Paul Newton, the pencil and pastel on paper portrait of Professor Derek Freeman 1996, the type C print of actor David Gulpilil by David Moore, 1981 and, a personal favourite, a brilliant glazed ceramic portrait of Dr John Yu by Ah Xian, 2004.

I particularly liked the section containing many portraits from the colonial era of Australia, some of which no doubt were lucky to survive.

From the heady days of Captain Cook’s arrival captured by artist John Webber, a member of his crew over many voyages, which allows us to know and understand a little about the challenges the explorers and later immigrants encountered and surmounted, to the elegant sketch of Martha Sarah Butler drawn by prolific convict artist Thomas Griffiths Wainewright, whose earrings and brooch remind us she was from the famous Asprey family at London, the pictures are all about ‘social’ status and as such, important historical documents. Portraiture is a language of expression with its own grammar and vocabulary and from colonial to contemporary times in Australia portraits in our history document a moment in time for the sitter, whose lives made a difference to many others, mighty, memorable, macabre or otherwise.

Macabre really does come into it, because the gallery also holds images of bushrangers, criminals and murderers, some caught in life, the majority in death.

What is the test of a great portrait – is it about the power of the artist to enter the sitter’s emotions and convey their feelings so we might experience empathy? Portraiture it seems with the passing of the ages has held a certain fascination for us all. ‘Until four centuries before Christ the ancient Greeks did not have a need for the soul to recognize its former body, however after Greek philosopher Plato (427-347 BC) published the dialogues of his friend and mentor Socrates, in 399BCE, the soul was held to be at the centre of human personality.

This had a pervasive and incalculable influence on the rendering of human likenesses.

Roman writer, Pliny the Elder wrote of Greek sculpture. ‘In this art, noble men were made to appear more noble.

Portraiture as a genre evolved rapidly following a long dormancy, with the advent of Humanism and during the fourteenth century, through an arbitrary arrangement of light, shade and colour, artists sought to make three-dimensional objects melt into the ambient atmosphere, fusing one with the other, until the whole became a single pictorial effect.

During the fifteenth century individuals were independently portrayed and there was a transformation from a linear or relief like style to a more painterly depiction, one where light and shade merge imperceptibly. Contours were softened to unify the figure and its ambient atmosphere. In Germany for artist Albrecht Durer (1471-1528), direct observation was the path to truth. He was one of the first artist to leave behind a series of self portraits, which are today a great insight into the man. In 1500 he portrayed himself in a conventional likeness of Jesus Christ, revealing a characteristic insensitivity and egotism.

Today despite advances in technology, especially photography, it still seems to be paintings; sculpture and drawing that still garner the most attention. The success of The Archibald Prize each year at Sydney informs that thought, so much so that today the people who work in the Packing Room also have a say.  Portraits move, touch and speak to everyone.

This year’s winning portrait of actor Hugo Weaving continues a trend that sees popular celebrities enjoying a particular kind of status that comes along with an artist capturing creatively an image for all time. It’s often how those who come after will remember them.

Browsing in the shop afterwards was like being in Aladdin’s cave for me, all the books either hand selected, and a small amount published as part of the NPG’s charter. All in all I found it a very illuminating experience.

The purpose of the National Portrait Gallery is to increase the understanding and appreciation of the Australian people – their identity, history, culture, creativity and diversity – through portraiture.

The design of the new building draws inspiration from Canberra’s environment and natural light and links the visitor’s experiences of the gallery’s spaces to the Australian landscape. Most importantly, the concept for the new gallery is grounded in the experience of looking at portraiture, and in its emphasis on human scale the building favours intimacy and connection in lieu of reverence and the monumental. As has been the case for the Gallery’s time at Old Parliament House, the new spaces are about face-to-face experiences with individual lives, admirable and otherwise. The National Portrait Gallery’s new home is thus unique in its reflection of the flavour of the collection and further exercises our purpose of making new and important points about portraiture in Australia.

Vale Bill Cunningham, New York’s photographic wizard, whose discerning eye for capturing his subjects fashionable faddisms, made him a master of street style