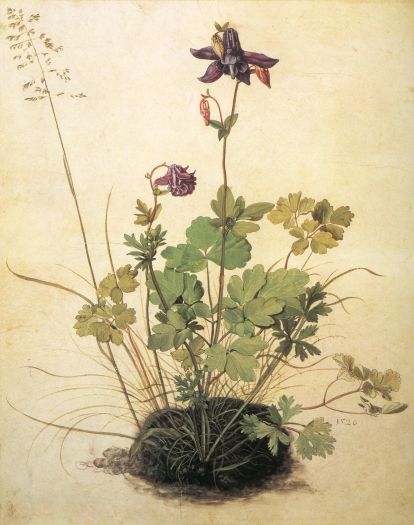 During the medieval period (C6 – C13) hundreds of varieties of flowers were introduced into Europe via the Crusades. Secluded gardens provided a secret place for lovers away from prying eyes. ‘I found her in an arbour, sweet, under a bough’ is the sort of phrase that opened many a medieval troubadours love ballad. Climbing plants covered a lover’s bower; honeysuckle, wildrose and grape were planted to grow on a trellis. As a young man in the fifteenth century in Germany Albrecht Durer (1471-1528) was apprenticed to Michael Wolgemut, chief illustrator of the Nuremberg Chronicle. He travelled widely and his work as a painter was only exceeded by his ability to engrave on metal. He introduced a new note of botanical accuracy into his watercolour studies of flowers, of which only ten survive. The plants are depicted exactly as he saw them growing in the field, not as individual specimens.