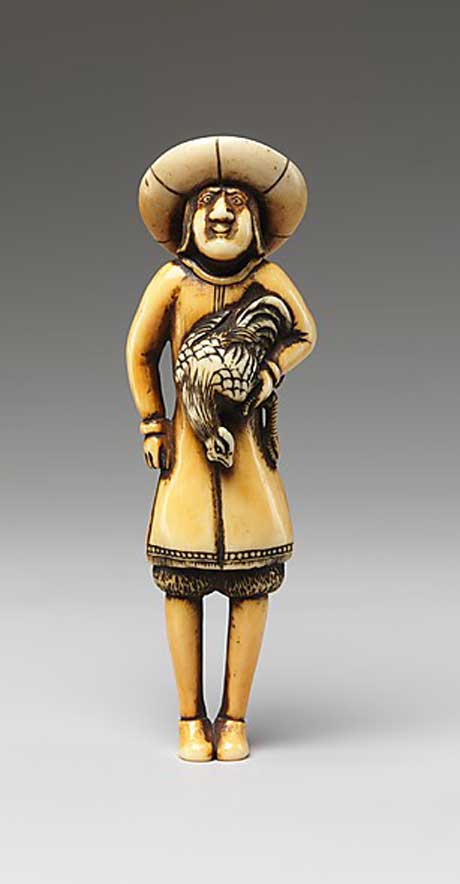 However he is about a great deal more than he seems at first glance.

Netsuke made their debut late in the seventeenth century as an aspect of Japanese costume, specifically for a man.

Traditionally Japanese men wore a garment called kosode, which had no pockets. An elegant solution was to place their pipes, tobacco and money, seals, or medicine into a container, which was then hung from the sash of the robe by a cord.

The small fastener that secured the cord at the top of the sash was the netsuke.

Attached to the cord were beautifully crafted boxes known as inro, which were held shut by an ojime, or a sliding bead on the cord. 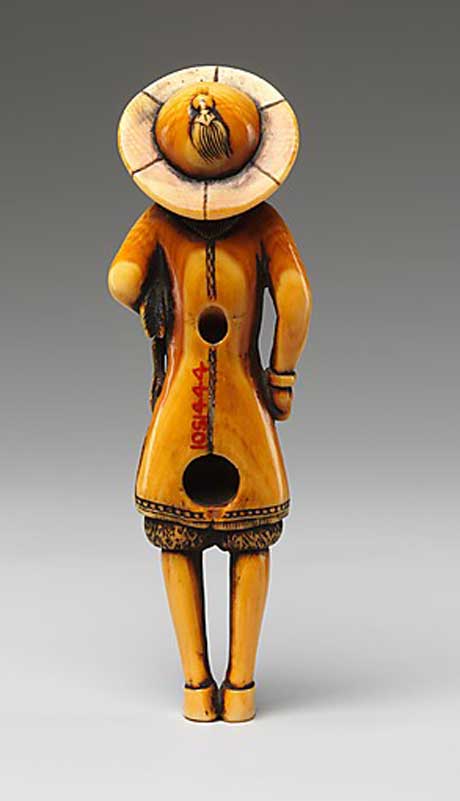 All of these elements were subjected to design and decoration and the results were often quite spectacular.

Many of the early Netsuke (18th century) reflect important aspects of Japanese life, while some of the later ones (19th century) are more whimsical, like this fabulous foreigner who is carrying a cock.

The cock fight was widely held and a very popular event in eighteenth century east Asia. A few foreigner traders were busy making profits from this unhappy sport, while the netsuke carvers caricatured Portuguese, Dutch and Chinese ‘foreigners’.

They were only just tolerated in trading enclosures, kept at bay so as not to come into contact with more Japanese people than was absolutely necessary.

The influence of these foreigners was alarming in a culture that had, for much of its life, been cut off because of its geographical restraints. 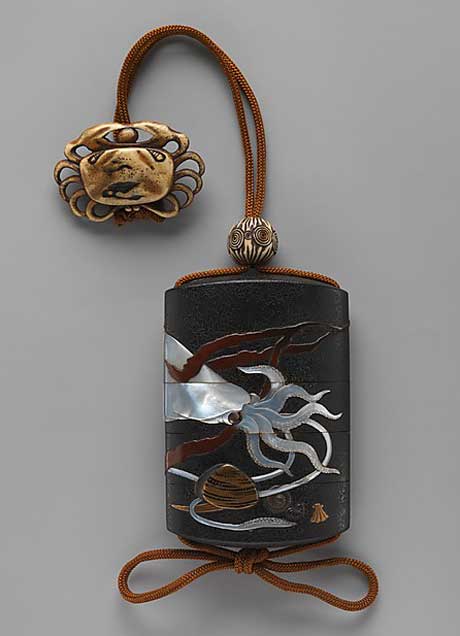 Inro with a design of shells and seawood by lacquer artist Hara Yoyusai (1769-1845). The ivory netsuke is of a crab and the ojime, carved Metropolitan Museum of Art at New York

Japan had been only a relatively new discovery for the west, but it began opening up to a wider western trade when American Commander Perry, in 1853, formulated a trade agreement.

It was from 1854 that Japanese goods became available in Europe and England and became the fashionable rage.

Woodcut prints became very popular among avant-garde artists, particularly in France. After that, well it was on for young and old.

The introduction of Netsuke in Japan originally coincided with a repeal of Japanese laws against importation and the use of tobacco. This also led to the adoption of pipe smoking.

Those foreigners were a corruptive force a fact that could now be proven. Netsuke were compact, often cute, with no sharp protruding edges, yet strong and hard wearing. Ivory and wood were the most widely used materials. 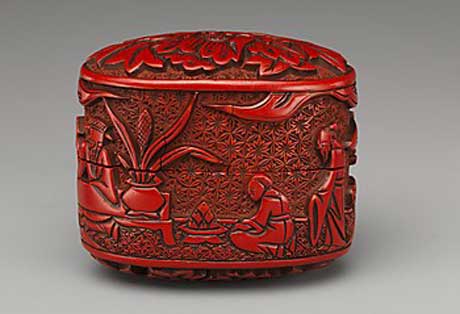 In Japan strict rules of dress forbade outward and ostentatious displays of wealth.  Netsuke were not technically clothing so they were not subject to restrictions placed on art, where representations of religious matter were forbidden. As a result, no subject or material was off limits to artisans making these divine small objects.

Social status was revealed and confirmed through netsuke in ways that could not be expressed through dress. These miniature marvels were basically wearable art forms that would eventually become coveted collectables in the west. 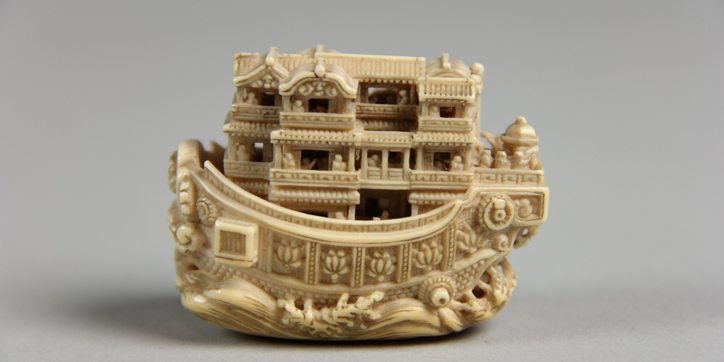 Ivory had originally arrived into Japan via Chinese and Dutch traders  throughout the whole of the Edo Period in Japanese culture (1615-1868), when the shoguns of the Tokugawa family reigned supreme.

Other materials also used for Netsuke were bone, horn, shell, amber, soapstone, ceramics and spectacular red lacquer. The process to produce this quality of cinnibar lacquer was indeed arduous, but the results were worth it. 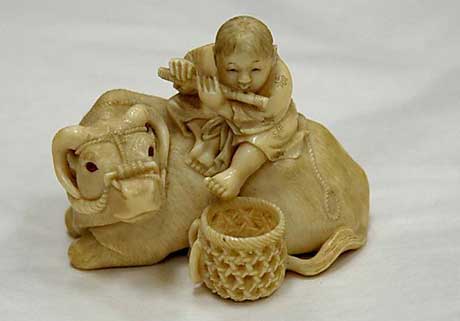 The Japanese aesthetic favoured simple shapes and forms but gradually as these small works of decorative art evolved in both shape and fine craftsmanship and by the 20th century they were highly collectable. Beautifully executed, and with great attention to detail, Netsuke had literary, historical and cultural associations.

They were both functional and pleasing on many levels, becoming especially renowned for their beauty and humour.

The crane, which is the symbol of longevity was only rarely sighted and highly prized. 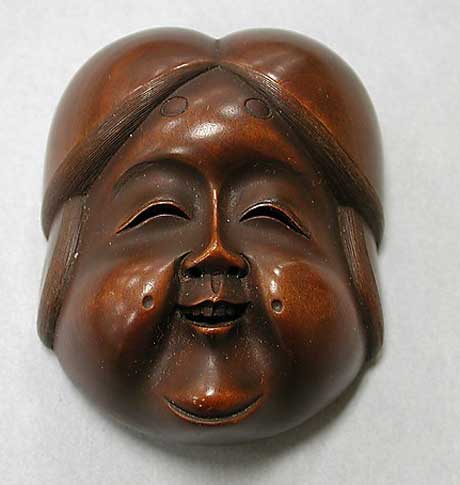 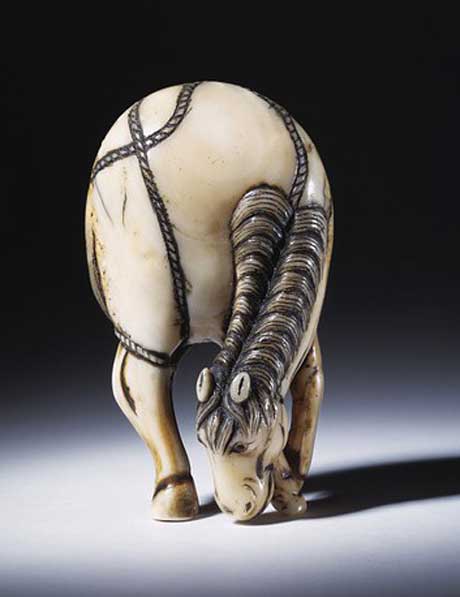 Am I gorgeous or what, beautifully rendered Netsuke of a horse carved from ivory, a mini marvel of art – V & A Museum at London

Symbolism included heraldry found at the Japanese ‘court and warrior society’ as well as the religions of Shinto and Buddhism. Shinto – means, the way of the kami (gods).

It was the earliest Japanese religion ruled by the world of nature and sensitive to spiritual forces: it influenced the representation of fauna and flora as well as heaven and earth.

Japanese literature or theatre was reflected in the different forms Netsuke took.

The sun, the moon, the dragon and the peacock were early emblems of the first Japanese sovereigns.

Chrysanthemum and Paulownia, whose flowers resemble a foxglove flower were designed for later rulers. Flowers, animals, and characters from No or Kabuki theater, religion, or mythology were carved from ivory, bone, wood, clay, lacquer, and precious metals.

The horse became a popular subject, because he is one of the twelve animals in the east Asian zodiac. If the forms were three dimensional, like our delightful horse from the V & A Museum at London,  they were particularly prized.

Deriving from Chinese cosmology, a Netsuke portrayed all the animals associated with New Year festivities of the appropriate year. They were used all through the year and then were put away and not worn again until 12 years later, in accordance with a cycle that became part of a custom.

Following their heyday during the 18th and 19th centuries, their importance waned by the end of the nineteenth century when Japan was embracing garments worn in the west. For a form of sculpture, usually no more than three inches tall, Netsuke were functional, social, and aesthetic and these wonderful little objects played a sizable role in the development of the traditional Japanese culture. 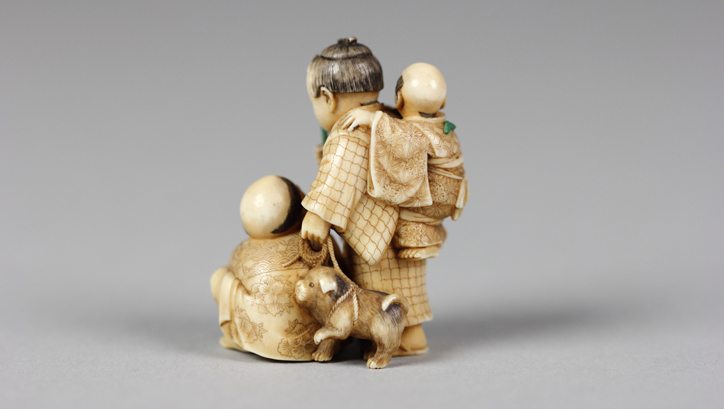