Major cities around the world today embrace the idea of setting aside a great civic space in the form of a garden to visually enrich our built environment, as well as nourish each individual soul; a botanical garden. The idea of a garden harks back to the day when primitive man, as a hunter and gatherer, first became fully aware his existence relied on not only his knowledge of the land he traversed daily, but also of its flora, fauna and its importance in his life cycle. 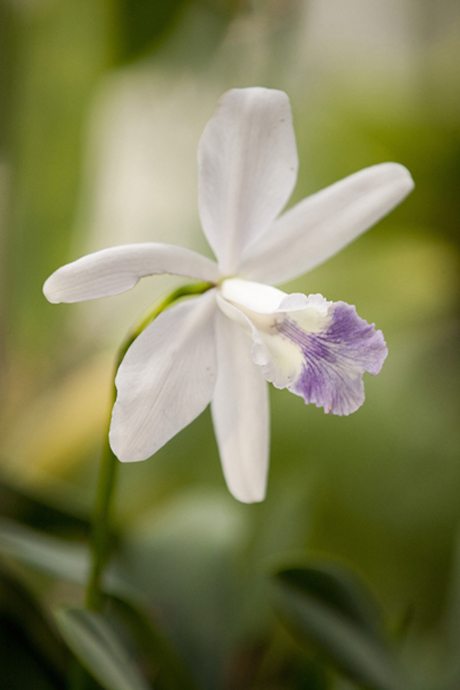 Now we could be tempted to think this was all just about survival, but humans have proved time and time again through the centuries, that it is also about beauty and how it sustains and inspires us to embrace all of life’s great experiences.

Each spring as the first rays of the sun begin the winter thaw in the New York Botanical Gardens (NYBG) sited in the Bronx, tens of thousands of blooms are amassed for a truly stupendous annual event that brings eager orchid enthusiasts from all around the world to ooh, aagh and admire.

The NYBG is a major institution with some 200 staff members who monitor, maintain and move this garden forward on a daily basis. Over one million visitors come annually to the NYBG to enjoy not only its remarkable diversity of tropical, temperate, and desert flora, but also the established renowned exhibitions and festivals they offer. After celebrating 125 years of the founding of garden and its history throughout 2016, the NYBG are in 2017 starting a further chapter in its life with their 15th annual feast of beauty, their truly fabulous Orchid Show, this year with a focus on the bounteous blooms from Thailand. Overseeing the extensive tropical- subtropical plant collections housed within the stunning Edith A. Haupt Conservatory, Christian Primeau has designed this year’s show in homage to the wealth of orchids, acclaimed tropical gardens, renowned orchid breeding, and rich cultural history of this Southeast Asian nation, home to more than 1,200 native orchid species. Marc Hachadourian, Director of the Nolen Greenhouses has curated the exhibition’s orchid selection and NYBG’s extensive groupings of living plants from around the world maintained in the Nolen Greenhouses, the behind-the-scenes glasshouses where plants for the Garden’s indoor and outdoor displays and science research program are grown and maintained. Opened in 1902 with its 90-foot dome, a complex heating and cooling system as well as a staff of gardeners, horticulturalists and designers, who keep the especially installed displays both alive and thriving, the fabulous Haupt Conservatory (NYBG’s secret weapon) will also contain two spirit houses; shrines to protective spirits. Small ponds and pools will help to suggest a tranquil atmosphere, with blooms floating in large water jars. Decorative lanterns, trees and shrubs that have been clipped and coaxed into abstract and fanciful shapes, plants pruned and trained to form ball shaped formations and an astonishing array of orchids on show, will be sure to both captivate and dazzle in their colourful intensity. Thailand is a major producer of orchids, having a climate and conditions that make these beauties thrive. When they are in flower they line Thai streets allowing every member of the public to enjoy the bounty of their beauty and the colourful perspective they add to life. As always the NYBG for the Orchid show will provides an irresistible array of plants to discover and events to enjoy set in various themed landscapes that never fail to capture the viewers imagination. An arched façade of a traditional Thai pavilion adorned with hundreds of orchids will be the centrepiece of the design when the show opens on February 18, and will be replenished and regenerated until the show ends on April 9, 2017.

The largest Victorian style purposefully built greenhouse in the world the Haupt Conservatory’s design was inspired by the Great Palm House, at Kew Gardens in London, inspired in turn by The Great Conservatory at Chatsworth House in Derbyshire England, built between 1836-1841 in Derbyshire. Some 200 staff members monitor, maintain and move this garden forward on a daily basis for the over one million visitors who come annually to enjoy not only its remarkable diversity of tropical, temperate, and desert flora, but also for the established renowned exhibitions and festivals they offer. A visual feast for all the senses, with spider orchids, Cymbidium orchids, lady slipper orchids, Phalaeinopsis orchids, vanilla orchids, Darwin star orchids and dancing lady orchids, how I wish I could be in New York at the NYBG for the Orchid Show: Thailand and enter into such a wonderful paradise of fragrance. Spring has surely sprung in the Northern Hemisphere.