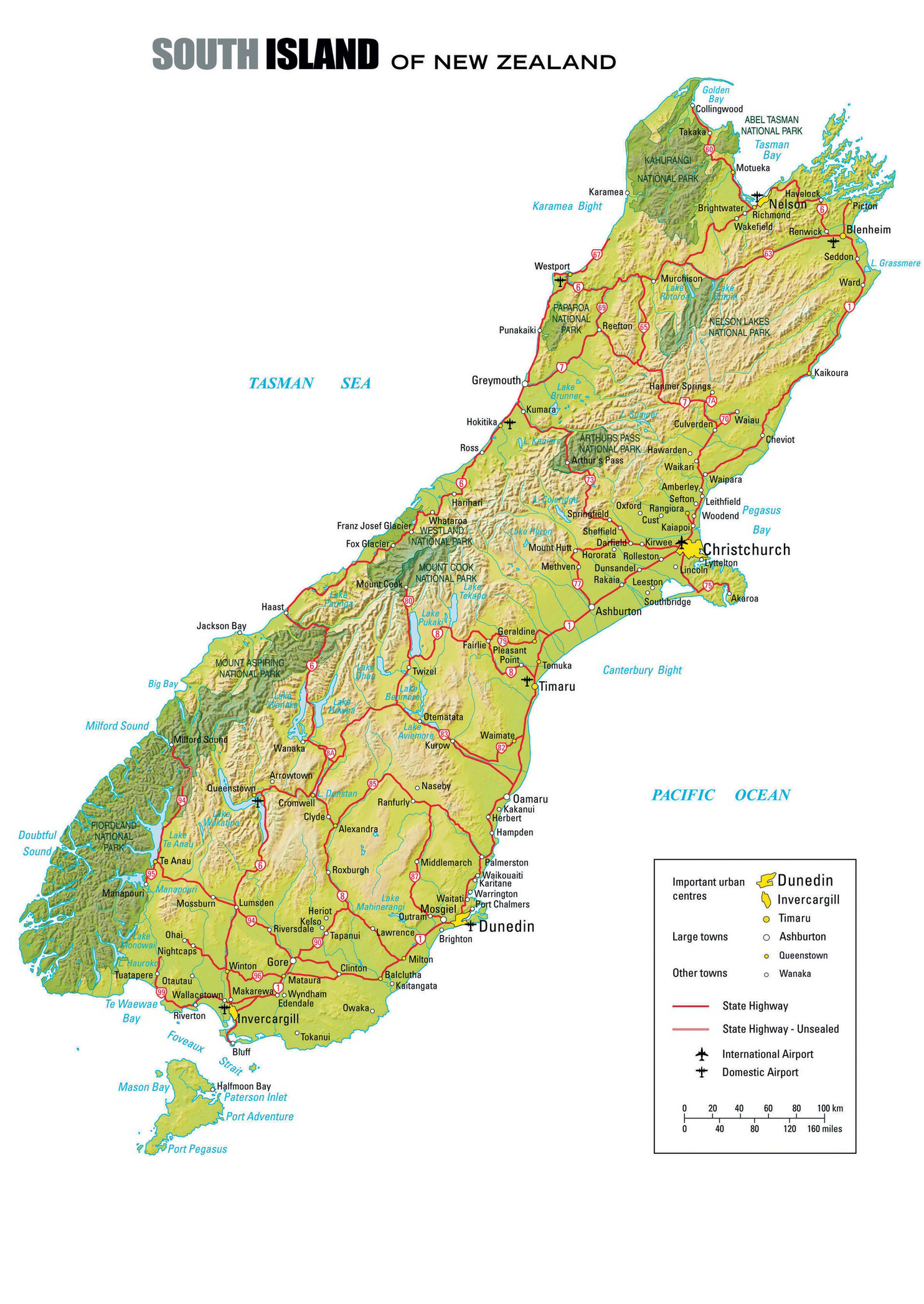 Kia ora is a familiar Maori greeting and comes from the splendour of New Zealand’s South Island. The scenic diversity, unique vegetation, climatic contrasts and wildlife colonies left an overwhelming impression on the twenty passengers travelling with holiday specialists Grand Pacific Tours. After docking at Picton we boarded the Ultimate Coach and our quintessential driver and tour leader David Underwood explained the day’s itinerary. We toured the alpine village of St Arnaud, enchanting beech Maruia Forest and picturesque Lewis Pass to Christchurch, New Zealand’s gateway to the South Island.

Christchurch has lush green parks and gardens, tree lined boulevards that contrast with the colourful architecture. The meandering Avon River is an additional allure as it winds through the inner city and adjacent parks. 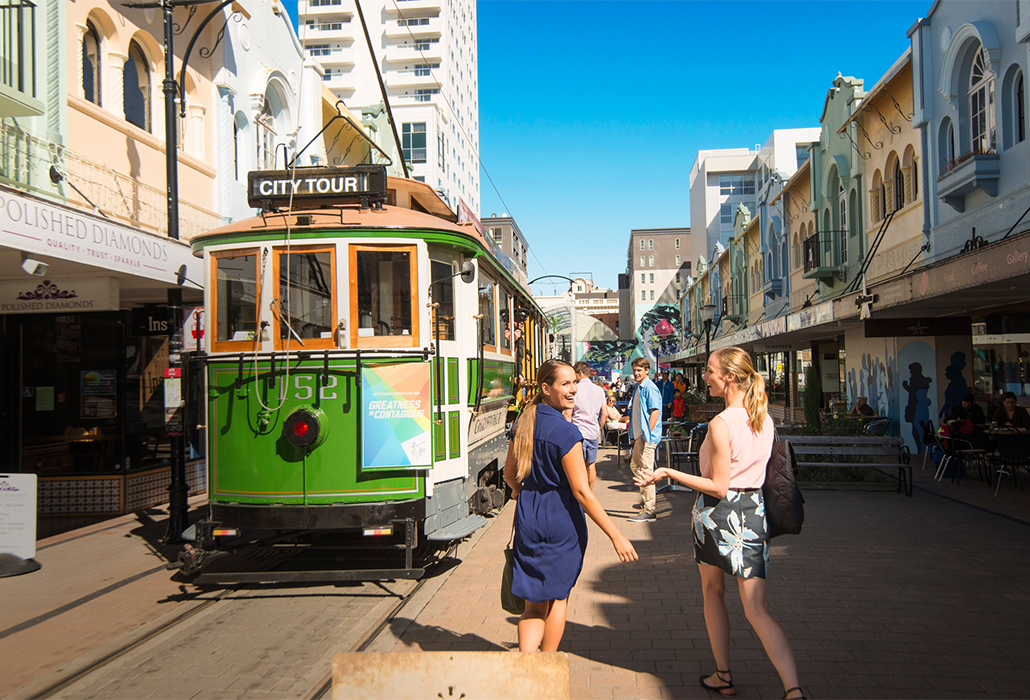 This is a city of contradictions, where the earthquake devastation is juxtaposed with the courageous spirit of the New Zealand people and the optimism of new constructions within the ongoing recovery operation. Memorials across the city of Christchurch reflect the profound effects the 2010 and 2011 earthquakes had on its citizens.

I was particularly moved by 185 Empty White Chairs assembled as a tribute to those who lost their lives. Artist Peter Majendie says this installation is “depicting the absence of the person, it’s not as if this chair is the person.” It has become almost a sacred site, a poignant reminder of loss. 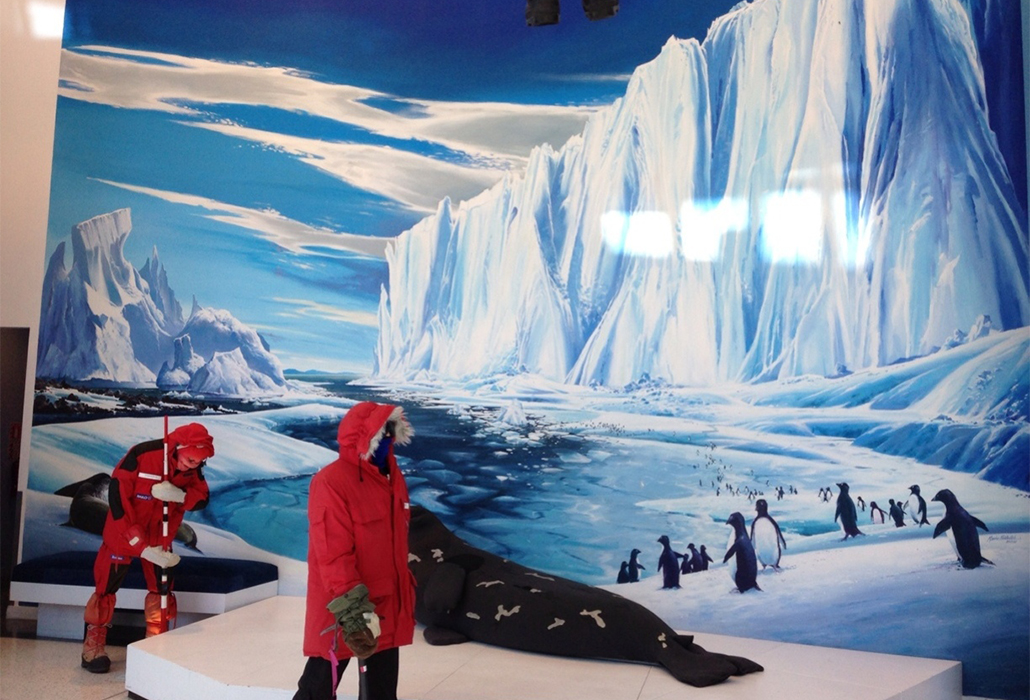 Later we visited the International Antarctic Centre an interactive, tactile and thrilling adventure. It is located about 20 minutes from Christchurch and is the base for the New Zealand, United States and Italian programs. A range of exhibits on the exploration and geology of Antarctica are on display.

Here visitors can experience real snow and ice in the Indoor polar room and brace themselves for an Antarctic storm where the wind chill plummets temperatures to -18*C. A highlight of the Centre is the penguin encounter where rescued Little Blue Penguins (the smallest in the world) are fed twice daily. 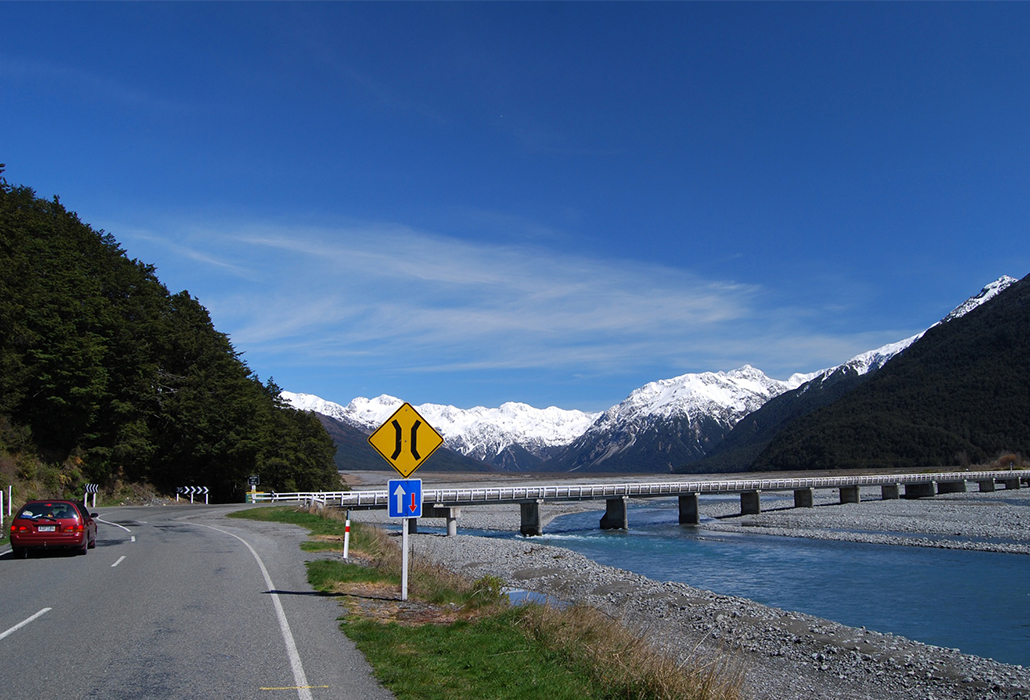 The following morning we boarded the TranzAlpine embarking on one of the great train journeys of the world. We travelled over massive viaducts, river valleys and dramatic gorges as we ascended to Arthur’s Pass, located in the centre of the Southern Alps. The striking views from the train provided magnificent and endless photographic opportunities. 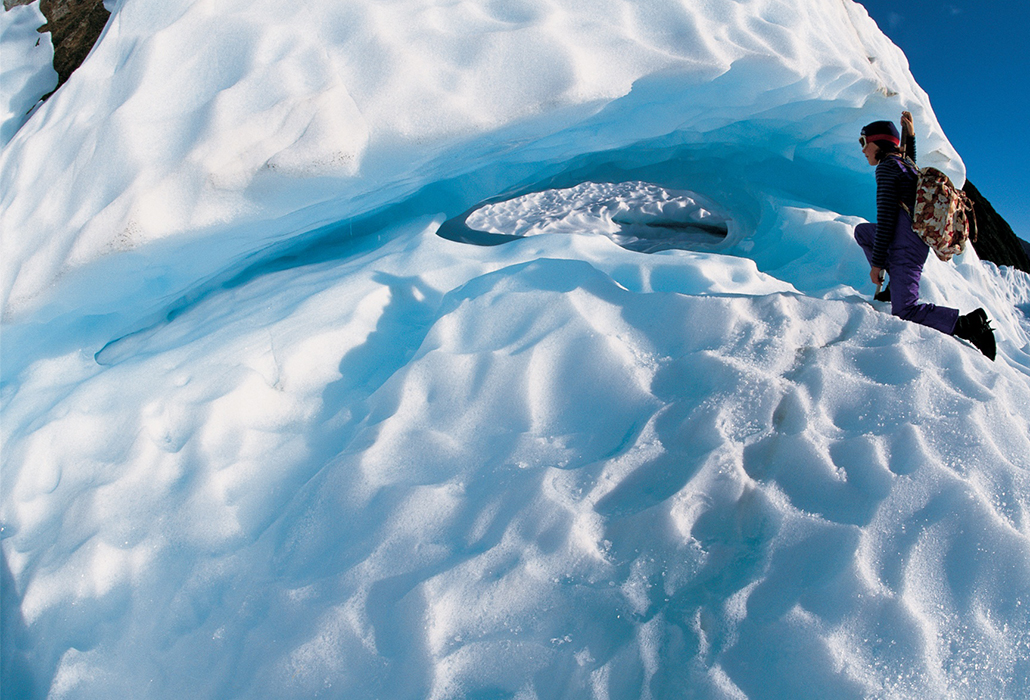 Later that day our Ultimate New Zealand Coach collected us and we headed for Hokitika, famous for its Greenstone, a hard opaque, emerald stone. We continued via Franz Josef to Fox Glacier. Unfortunately the weather was not conducive to a scenic flight over the spectacular glaciers.

The Arthur’s Pass road climbs the 3,017 feet to the summit, it is the highest and most remarkable highway across the Southern Alps and David’s driving and commentary expertise was much valued and appreciated by his 20 passengers. 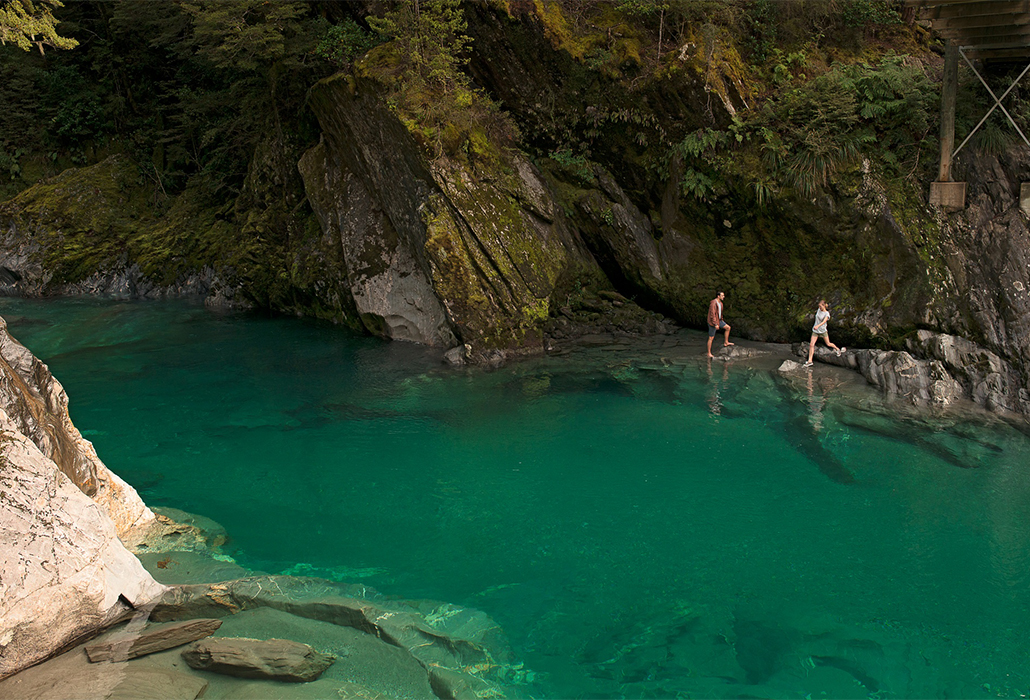 The beautiful snow-capped peaks of the Southern Alps were our vistas the next day as we travelled south along the West Coast via the Haast Pass. Here we boarded a fully enclosed jet-boat for an intrepid adventure up the Haast River absorbing the spirit of the wild untouched natural beauty of Te Wahipounamu, South West World Heritage Area of New Zealand.

This close up quest delivered an awe inspiring example of environmental wilderness that was unique and exhilarating.  The encounter was a rare opportunity to view and soak up nature in all its glory. Cascading waterfalls, mist shrouds, native bush clad banks and rocky outcrops created a mystique and forged a solemn and serene stillness. 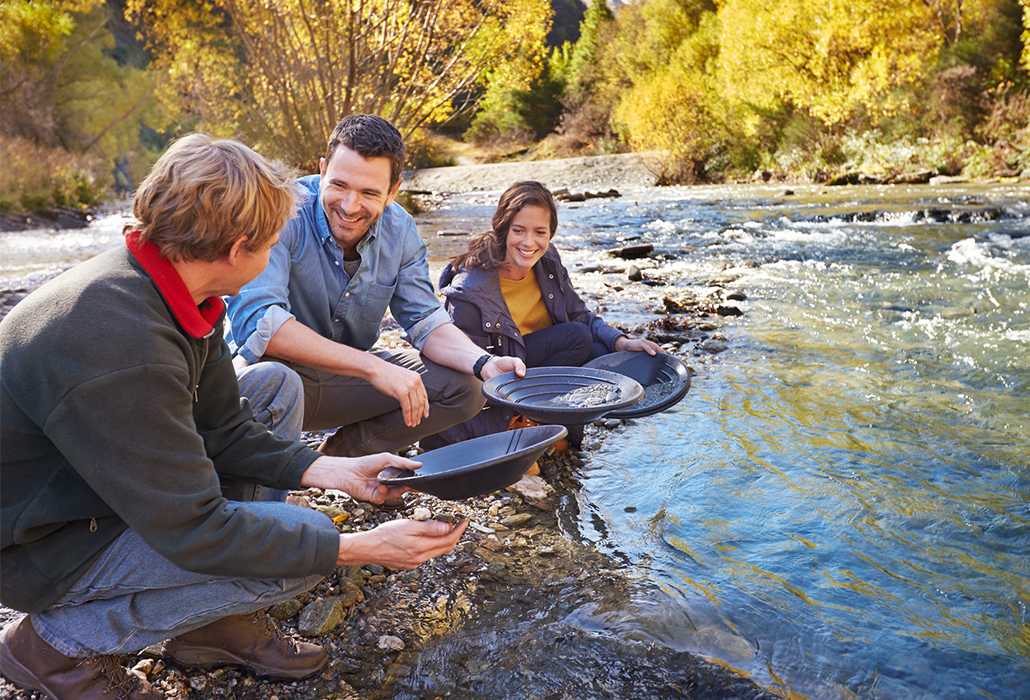 Arrowtown a picturesque gold-mining town nestled at the foot of rugged hills was our next destination. The main street of the town is lined with deciduous trees and the character of the old colonial shops and stone cottages is charming and creates a tourist hotspot. The Lakes District Museum chronicles the gold-mining history including the working and domestic life of pioneers of the gold rush era.

Twenty one kilometres away is Queenstown situated in ‘one of the most scenic settings in the world’ according to DK Eyewitness Travel New Zealand. The city is situated on the charismatic shores of Lake Wakatipu and is backed by The Remarkables mountain range. The gondola up to Bob’s Peak provides panoramic views of this exquisitely located city. 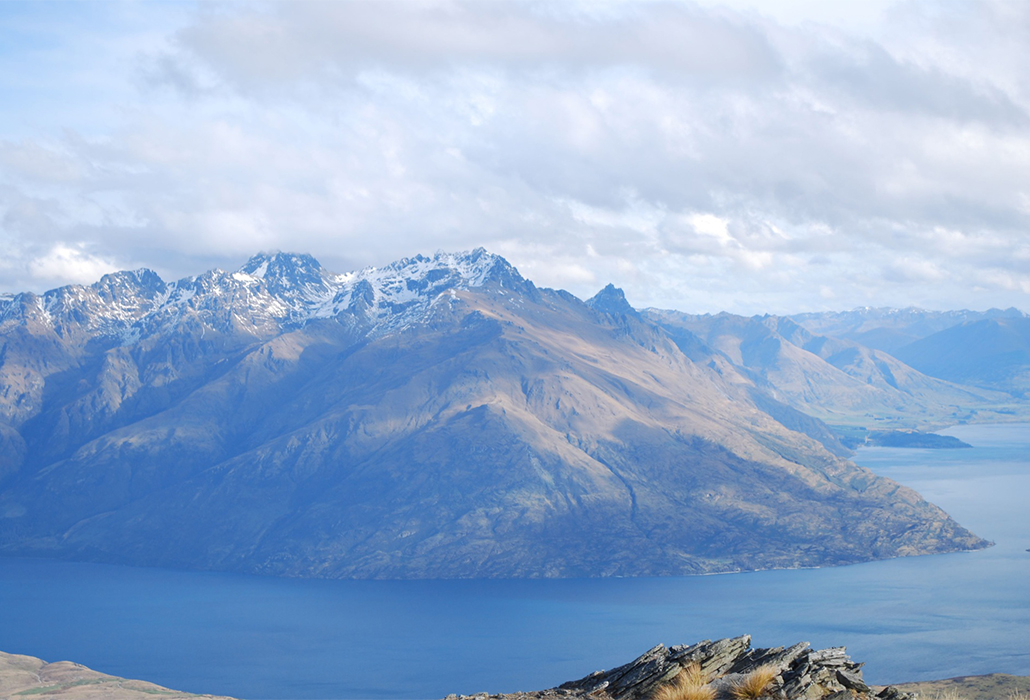 The following evening we boarded the vintage steamship TSS Earnslaw and cruised across the beautiful glacial Lake Wakatipu absorbing the commanding scenery while heading to Walter Peak High Country Farm. The Farm was founded in 1860 by the McKenzie family and today is still an operational sheep and cattle station, where visitors have first-hand insights into traditional New Zealand farm life. 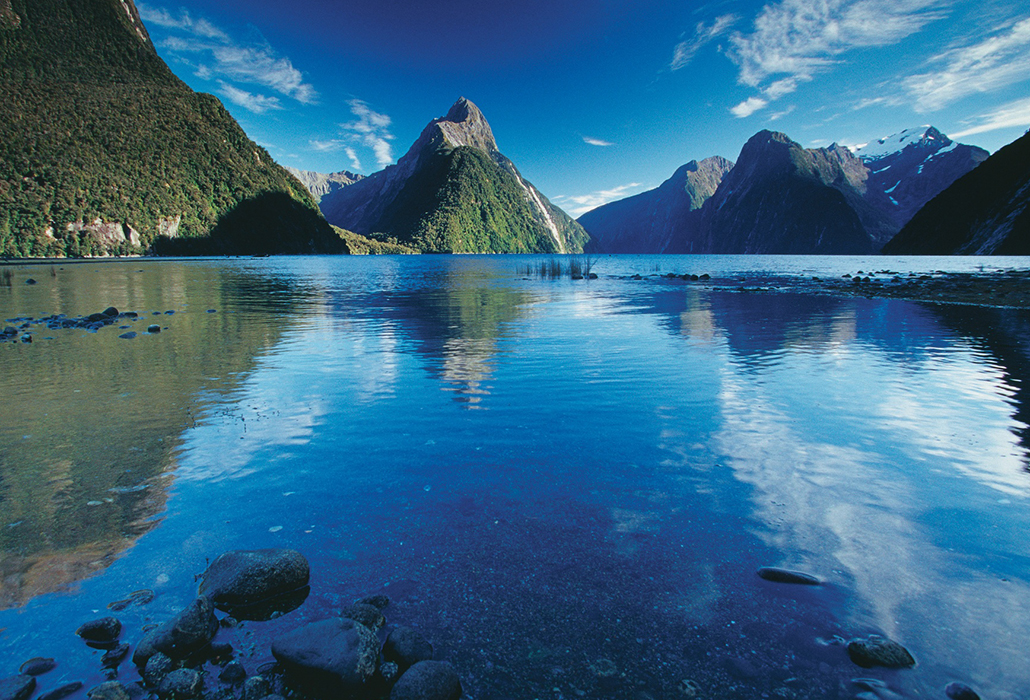 The next day we travelled via Te Anau to Manapouri. There is no direct road access so the only way to Doubtful Sound is a cruise across the glacial Lake Manapouri and an impressive coach trip over the Wilmot Pass. The isolation makes this fiord a very extraordinary place. After arriving at Deep Cove we boarded the Fiordland Navigator for an awesome overnight stay in a rare corner of the planet.

The remoteness, the wildness and the tranquillity of this World Heritage Area was unforgettably etched in my memory. Steep sided mountains covered with dense rainforest, wisps of white cloud hovered and birdsong filtered the air as we navigated the twisted hidden inlets. Doubtful Sound is three times longer than Milford Sound and has a surface area ten times larger. 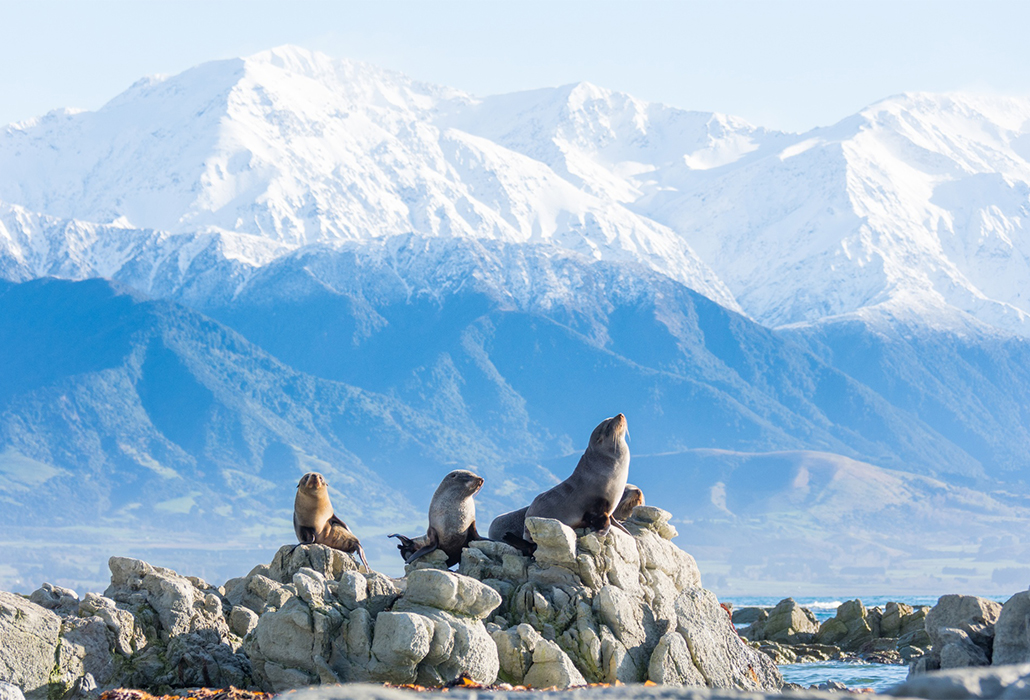 Our journey took us to the Tasman Sea where rocky outcrops were the habitat of fur seals. When the Captain turned the generator off, the ‘sounds of silence’ lingered long and majestically, creating an ambience of unsurpassable aural and visual beauty. It was sublime!

We travelled on our Ultimate Coach back to Te Anau, the largest town in Fiordland and situated scenically on Lake Te Anau, (the largest lake in the South Island). In the afternoon we drifted across the Lake on board our catamaran to visit the Glow Worm Caves. 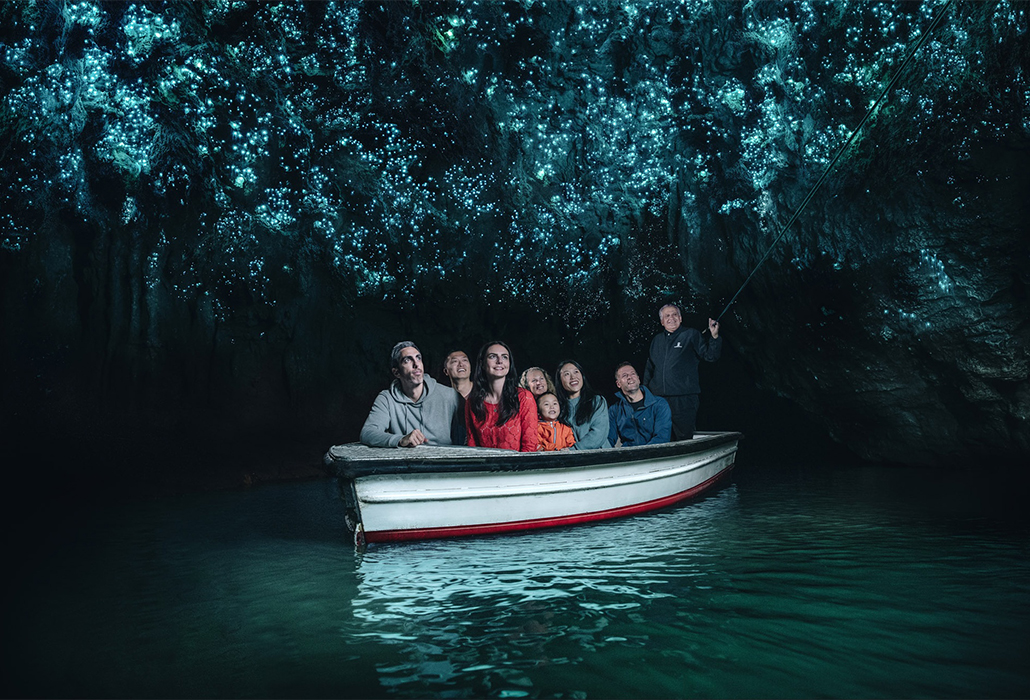 It was very mysterious to go underground and view the entwined network of limestone passages filled with sculptured rock, whirlpools and a roaring underground waterfall. Deep inside the caves we were taken by boat into a silent hidden grotto inhabited by hundreds of glow worms.

The glittering display they produced in the subterranean darkness was magical. Glow worms glow when they are hungry to attract and capture insects. I was reminded of the lyrics ‘Shine little glow worm, glimmer, glimmer’ from the1952 recording by The Mills Brother’s hit version of The Glow Worm. 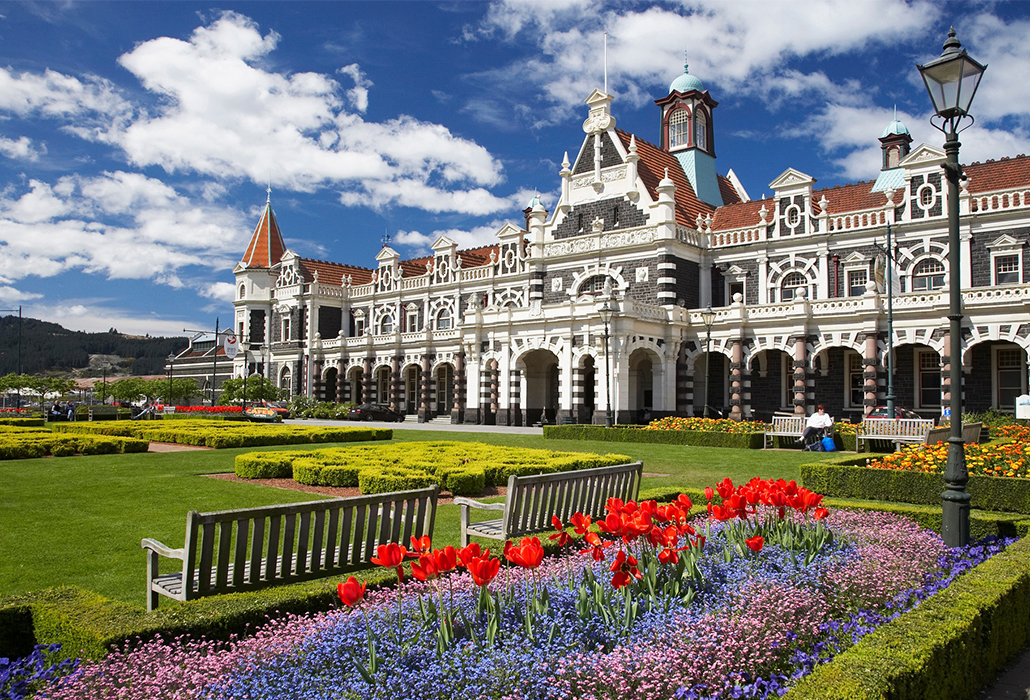 Next day we travelled to Dunedin with its centrally planned focal point, The Octagon. The diverse and fascinating architecture dates back to its heyday following the 1860’s gold rush. It has strong Scottish links. Dunedin is the old Gaelic name for Edinburgh.

Then, we explored Dunedin’s historic Edwardian Railway Station before boarding the Silver Fern railcar for a journey along spectacular clifftops overlooking the Pacific Ocean and Blueskin Bay. 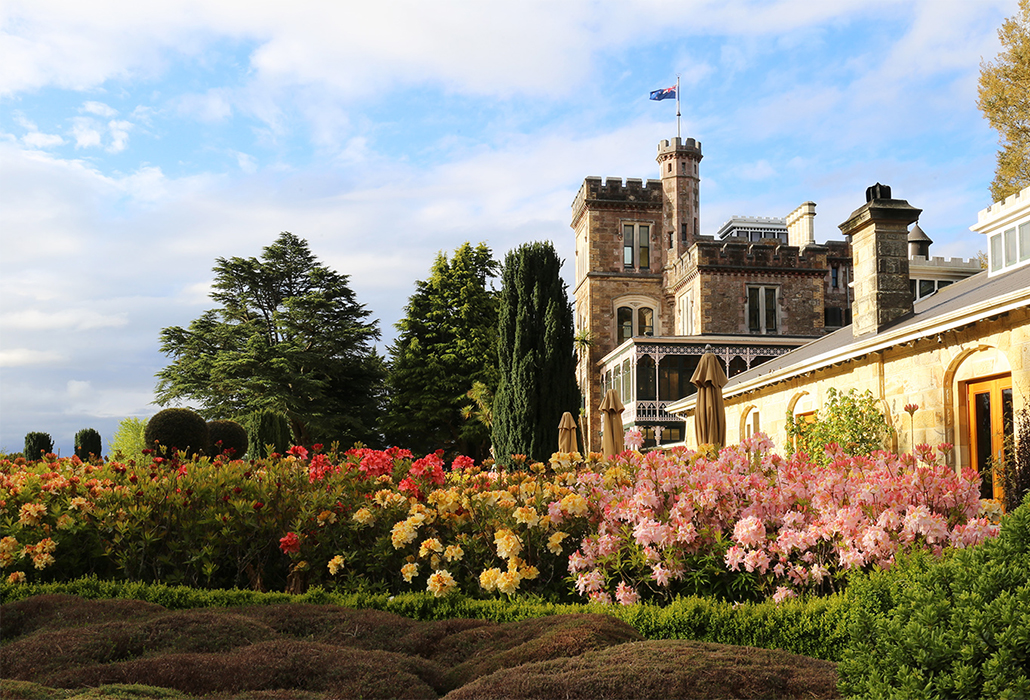 The following morning we travelled 14 kilometres along the extraordinary Otago Peninsular to New Zealand’s only castle, Larnach Castle. It was built between 1871 and 1885 by William J M Larnach for his wife, Eliza. The past tragic and scandalous stories told by our guide brought the castle to life.

The imposing stone mansion abounds in fine features including hanging staircase, elaborately carved and decorated ceilings and magnificent interiors. The castle is set amid a traditional garden restoration with plantings of New Zealand’s native flora further afield. I climbed up the very narrow steps for a view from the tower of the surrounding country, harbour and peninsular. It took my breath away.

The monumental restoration of the castle and its surrounds by the Barker family who purchased the derelict property in 1967 is a testament to their patience, diligence and sincerity of purpose. Its former graciousness is generously shared with the New Zealand people and overseas visitors. 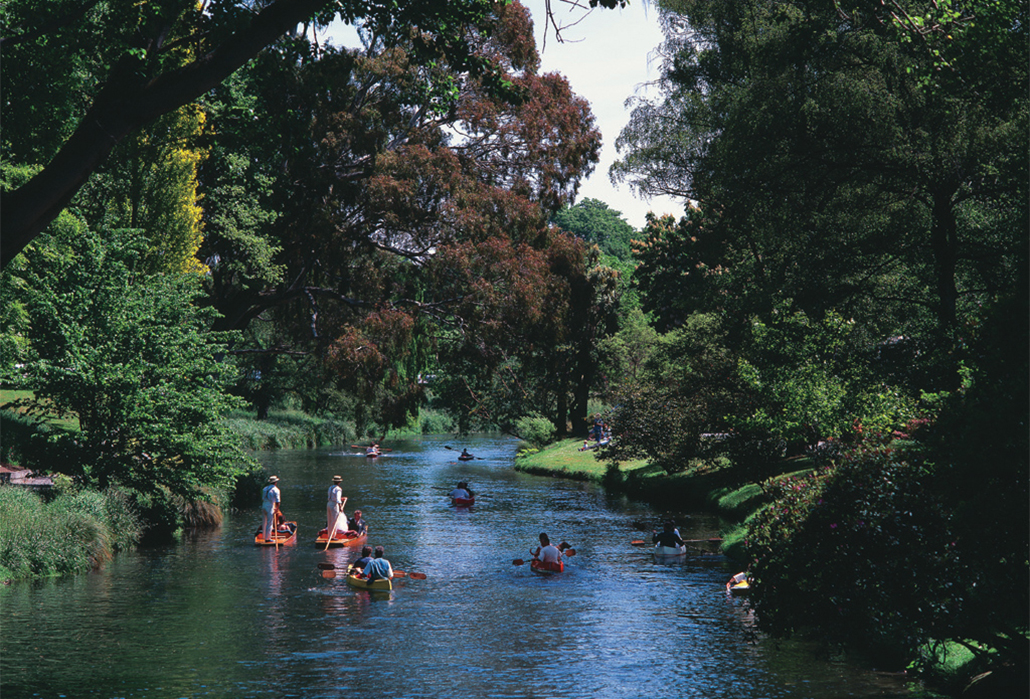 Then we returned to Christchurch to share and enjoy a farewell dinner that celebrated the camaraderie of the group and the marvel of the Grand Pacific Tour. New Zealand is unquestionably a two Island wonder definitely not to be missed.

Dame Kiri Te Kanawa singing Po atarau e moea iho nei (Now is the hour for me to say goodbye) lingered as we said our goodbyes and returned to our homes in England and Australia.

Artistic director Paul Dyer promises the Australian Brandenburg Orchestra 2018 season will be a banquet of Baroque music with drama joy and flair like no other!