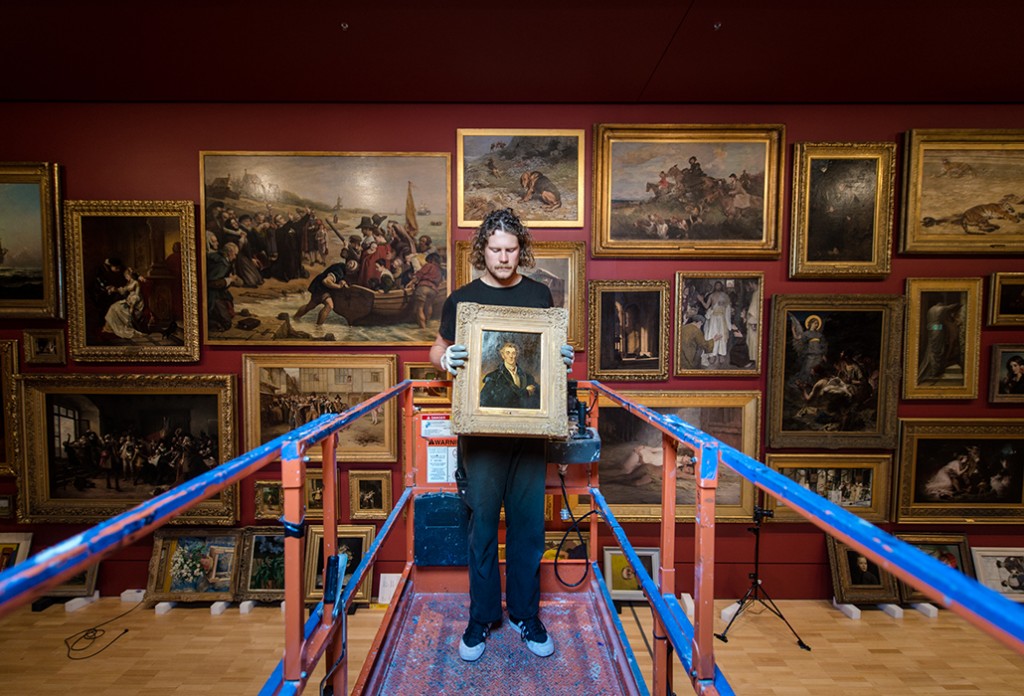 Now open once more after an ambitious reimagining and ‘rehanging’, the much loved and admired Salon Gallery at the National Gallery of Victoria (NGV), is for all those who enjoy the densely-layered style of placing paintings on view. Must say I am one of its biggest fans – love the diversity of styles together, recording random comments on the prevailing ideas, trends and fashions of their time.

Prevalent in Europe from the seventeenth to the nineteenth centuries and most notably, at the Paris Salon founded in 1667 and London’s Royal Academy from 1768, this method of hanging wondrous works all together in a melange of styles and stories was also employed at the NGV when it opened in 1861. “We are delighted to reopen this gallery in a newly refreshed display, featuring more than 50 additional works. The public are often in awe of the grandeur of these predominately nineteenth century masterpieces and we are pleased to be able to contextualise Australian paintings within this rich display of works,” said Director Tony Ellwood.

Australian artist Sir Arthur Streeton’s Corfe Castle offers visitors an opportunity to see how his works were displayed in London in 1910 alongside people portraits, boating scenes, hunting scenes and animal portraits, illustrating a level of emotion, a cautionary tale, a moral dilemma and lesson, or a psychological concept and much more. The works of French illustrator Gustave Doré for the fairy tales of Charles Perrault (1628–1703) reprinted in Paris in 1862 are illustrated by his Little Red Riding Hood, depicting ‘terror’ as a key component of fairy tales which usually had a moralizing element or subtext. While the stories were said to be written for children more than often, only the adults understood the real menace in their meaning. Danish born artist August Friedrich Albrecht Schenck’s painting Anguish of 1878 depicting a ewe protecting a dying lamb from a murderous assault by crows is reputedly a metaphor for human relationships and society.

‘Stone the crows’, what does it really say about us then, and indeed its artist Schenck’s state of mind. Psychologists may like to comment on why it is regularly voted by visitors as one of the most popular artworks in the NGV Collection. Studying at the renowned Ecole des Beaux-Arts as a young man, Schenck spent most of his career in Paris producing works that often depict the ‘struggle for survival’, part of an artist’s daily life, suffering for art.

Anguish was one of the NGV’s earliest acquisitions and is displayed among other nineteenth century narrative paintings as evidence of its enduring appeal. Interestingly it can also be found on social media and perhaps amazingly, August Schenck has a fan club on Facebook, which is so very now! The array of paintings in the NGV Salon Gallery do represent the prevailing taste of previous generations. However paintings like these acquired by state and regional galleries as well as by private collectors, provide valuable insights into the arts and cultural development of Australian cities and country towns, where so many people descended from English and European immigrant backgrounds. Will have to take myself on a contemplative visit soon, so I can become re-acquainted once more with all the pictures  on display in the superlative Salon Gallery at the NGV.