The Nicholson Museum at Sydney University is the second largest teaching collection of ancient artifacts in the world.

It is certainly the biggest such collection in Australia.

The museum contains a stunning array of ancient artifacts, humbling in that there are so many objects from many ancient civilisations we will recognise and connect with, despite them having been created thousands of years ago.

Sir Charles Nicholson (1808-1903) was a statesman, landowner, businessman, connoisseur, scholar and physician, as well as was one of the founders of the University of Sydney. He arrived in Sydney in 1833 where he established a fine reputation for his skill and business acumen. By 1845 he had already begun to collect rare books, antiquities, pictures and manuscripts, and was regarded as one of the most cultivated men in the colony.

Nicholson was a highly intelligent and visionary collector, who became entirely dedicated to bringing the cultural wealth of England and Europe to Australia.

He envisioned that for centuries to come descendants of the people who had migrated here from many other parts of the world, would want to be able to gain an understanding of the traditions associated with their collective cultural heritage.

In 1856 Nicholson travelled to Egypt and Europe where he bought many artifacts. They were readily available for purchase at the time. In 1860 the objects were moved from Nicholson’s house to three rooms in the Sydney University’s original Gothic Revival Style Quadrangle.  and the Nicholson Museum was founded.

It was my privilege for many years to work with a committee of dedicated people to raise funds to assist in expanding its valuable teaching collections.

This resulted in the museum today holding significant collections of artifacts gleaned from ancient Greece, Italy, Cyprus and Egypt, as well as the Near and Middle East.

My colleagues and I at the time wanted to aid scholarly international research. We belonged to The Australian Archaeological Institute at Athens, which was at that time guided over by the much respected Alexander Cambitoglou AO, the Emeritus Professor of Classical Archaeology and Emeritus Curator of the Nicholson Museum and, Director of the Australian Archaeological Institute at Athens. 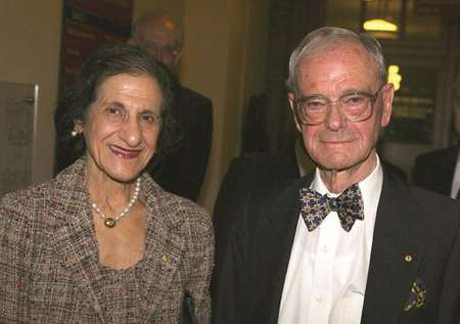 The Professor had become only the fourth person in the University of Sydney’s history to receive the prestigious title, Doctor of the University, during a Faculty of Arts graduation ceremony on 27 March 1991.

It was gratifying to see that Australia’s Ambassador to Greece, Jenny Bloomfield marked Australia Day 2013 in Athens by holding an event celebrating the work of Professor Alexander Cambitoglou. Speaking at the Acropolis Museum, Ambassador Bloomfield told guests the Institute was a proud reflection of the Australian spirit – a nation “of opportunity for all those with the resolve, the commitment, the work ethic and the determination to make a better life for themselves, for their community and for future generations”.

The Ambassador described Professor Cambitoglou as “a great Australian, as well as a truly special Greek”. Born in Thessaloniki in 1922, Alexander Cambitoglou arrived in Australia in 1961.

He was the first person of Greek background to be appointed as a university professor in Australia, when he became Professor of Classical Archaeology at the University of Sydney in 1963.

His achievements included conducting excavations at the Geometric settlement of Zagora on Andros in 1967. This was a collaboration between the Athens Archaeological Society and the University of Sydney.

Excavations at Zagora were fundamental for understanding life in the Aegean during the eighth century BC. This was a period that marked beginning of the Greek city-state and the rise of democracy at Athens where so much of our shared cultural heritage was founded. Model of the Acropolis at Athens, on display courtesy Nicholson Museum

During the mid-seventies Professor Cambitoglou also led an Australian expedition to Torone in Chalkidiki, before providing the greatest legacy to Australian scholars working in Greece.

He was appointed the Foundation Arthur and Renee George Professor of Classical Archaeology in 1978, and held the position until his retirement in 1989.

In 1980 he established The Australian Archaeological Institute at Athens, which has contributed so much to our own cultural evolution. Today at the Nicholson Museum everyone has an opportunity to wonder at the richness of its collections and enjoy being transported to different worlds without having to pack a bag or catch a plane.

The artifacts from Egypt are always popular. 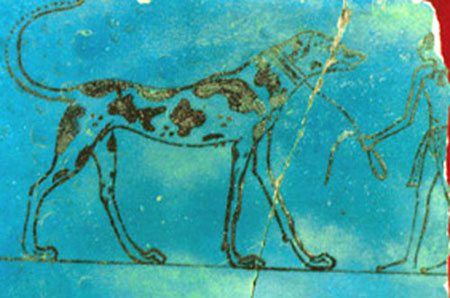 Walking the Dog, Egyptian Style, my favourite artifact in the Nicholson Museum

If you haven’t been make a date to go soon. The good thing is that because of many of the Nicholson’s initiatives it remains FREE to the public.

When you go to visit please look out for my favourite artifact in the museum.

It is a small blue faience tile, which depicts a man in Ancient Egypt (19th or 20th Dynasty New Kingdom 1570 – 1070 years before Christ) taking his dog for a walk on a lead.

It gives a whole new meaning to the term ‘walkies’ and importantly, even though only small and perhaps some might think relatively unimportant, emotionally it connects us today so strongly to our ancestors and their world.

It also importantly reinforces Charles Nicholson’s belief that in order to overcome the ills of society and to take up the opportunities or surmount the challenges of diversity, then both reason and education must always prevail. The past so eloquently informs the present.

Location: Quadrangle A14
University of Sydney