Five full-scale productions will help students of NIDA (National Institute of Dramatic Art) based in Sydney, attain excellence and a new level of engagement with their audiences October 24 – November 1 for their annual undergraduate and Master of Fine Arts (Design for Performance) season of performance art.

NIDA has an award-winning campus with a dedicated space for the institute’s growing suite of courses, continually building upon its significant achievements, by providing and maintaining a high level of excellence in both the education, and training of actors for theatre, film and television. The Country Wife will start the season. It is a play written in 1675 by William Wycherley inspired by works of French King Louis XIV’s favourite comedic playwright Moliere, who believed no subject was sacrosanct and happily used archetypes to challenge a spiritual or social vice.

It is all about the tension and personal conflict that emerged as the population in England went from being ruled by a deep-seated puritanical leader to one who created a different kind of courtly paradise in the Palace of Whitehall, one dominated by the gods of pleasure.

A comedy of manners or the lack thereof, The Country Wife is a notorious work, highlighting the outrageous behaviour of seventeenth century English aristocrats during the restoration and reign of the merry monarch King Charles II (b.1630 – 1660 – 1685) Popular for its lewd and lively characters including the lusty Margery, a country woman whose jealous husband isolates her at home in an attempt to ensure her fidelity, the work was considered by later audiences as far too crude, brutal and outrageous to be performed on stage and it was banned, languishing in obscurity 1753 – 1924. NIDA graduate also teams up for Fraternal, a play written and directed by Jake Stewart (Writing for Performance, 2016) and Ben Sheen (Directing, 2016), exploring the bond between two brothers and a family prone to tragedy.

“Darcy and Kent are brothers. You could say they’re best friends, but that’s kinda lame, so let’s not say that, but they’re brothers, so yeah, they’re close. Some would say too close. I mean, even you might say that.” Anthony Neilson’s play sees the main protagonist explore his deepest fears and desires, with a range of Sennheiser microphones and speakers delivering a 3D sound experience to audience members.

in the year the film is released, Australian director Tyran Parke will direct a sophisticated playful NIDA production of Hello Again, with music and lyrics from a book by Michael John LaChiusa based on the 1897 play La Ronde by Arthur Schnitzler

This much-loved musical has graced stages across globe to tell the story of human desire for connection and love. NIDA Director of Acting, John Bashford (Directing, 1985), brings his substantial directing and teaching experience to the Jacobean play The Changeling.

With a comic sub-plot that counterpoints the central narrative of obsession and revulsion in a Jacobean tragedy of love and death, the play follows a wife-to-be as she falls in love with another man and attempts to have her fiancé killed.

Four centuries old, this play proves that revenge tragedies have lost little of their charge; forbidden desire, political power struggles combined with battles between the sexes – haven’t gone away they are just dressed up in new clothing. We tend to think of divorce these days of being more or less passé, but in this period in time divorce in any way shape or form, unless by death, was virtually impossible to attain, never mind that King Henry VIII had managed it, it was for the majority, not even a remote possibility. 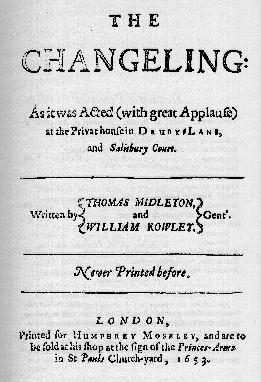 This play and others like it were rescued from oblivion by American born English playwright TS Eliot (1885-1965) who said ‘…the purpose of re-ascending to origins is so that we should be able to return, with greater spiritual knowledge, to our own situation’. Eliot also acclaimed The Changeling as Middleton’s greatest drama: “an eternal tragedy, as permanent as Oedipus or Antony and Cleopatra, the tragedy of the not naturally bad but irresponsible and undeveloped nature, caught in the consequences of its own action”.

So, perhaps perfection too … will be a hallmark of the October season of superlative plays this October at NIDA.

Y’are like to have a swift and pleasant passage. Please note: All NIDA October productions are suitable for mature audiences only.