What is it they say – everything old is new again or is it, what goes around comes around… albeit in a new guise! Religious leaders please note: there is a new temple for worshipers at London in England. Selfridges, which won the title of ‘Best Department Store in the World’ for two terms from 2010 – 2014 is fighting back against economic gloom with exciting new and creative marketing techniques. It has given back to the people of London, who have used its varied and many spaces for just over a hundred years now, by creating a special place for them to find or regain their headspace.

The Selfridges ‘No Noise’ initiative urges customers to ‘seek out moments of peace and tranquility in a world that bombards us with information and stimulation’. They recently unveiled their all-new ‘Silence Room’ where anyone can go to reclaim their life.

The Silence Room re-opened on the 11th January for the first time in over 90 years and a former monk Andy Puddicombe the founder of Headspace, led a 500-strong mass meditation. It was staged in the middle of its historic ground floor beauty hall. Headspace pods, installed in all Selfridges stores will deliver mindful messages and meditation practice.

Everyone is asked to remove their shoes at the door, which is all about leaving the troubles of the day behind you and about showing respect for the space you are entering, whether it is in your home or, as here; a unique pop up spiritual space. 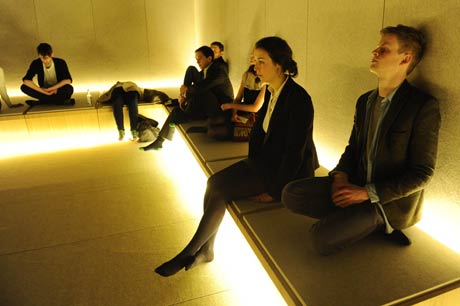 It’s not really a new idea either, in fact it was the visionary founder Harry Gordon Selfridge who first instigated it back in 1909 when he opened the store. The past informing the future. 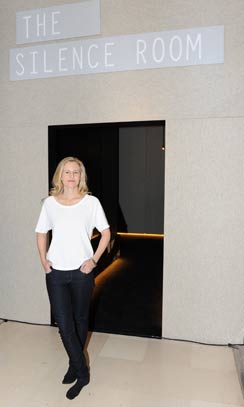 To gain entry today those participating must also leave their mobile phones and other 21st century distractions outside the door. How else would they be able to focus on finding their inner selves so that they can feel refreshed at the start of a New Year?

It seems the retail giant have taken on the responsibility of instructing a whole new generation of people about ‘self discipline’ and about respecting their bodies, a concept parents used to be involved in.

It’s a good place to do it because it is such a familiar and friendly environment for many sons and daughters of the so-called Silent and Baby Boomer generations, the place where many of their family and friends have engaged in a great deal of ‘retail’ therapy and where they also feel safe and secure. (Research conducted when producing community events for Brisbane City Council 2005-2010 informs this view).

Selfridges have, in a nutshell, essentially created a sacred – regarded with reverence, or a spiritual space although many young people participating would not be likely to see it that way, or perhaps even understand the irony. 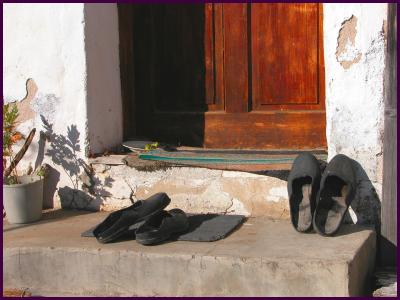 Retail institutions all over the world will join in and help them to change the game in order to boost their prestige and profits in the decade ahead.

It’s not really about the greater good, although the executives would probably want to see it that way. It’s all about safeguarding in challenging times the investment by stakeholders in their business, protecting people’s jobs and by extension, western culture’s economies.

More pop up specialist stores and spaces, more innovative events, artists and renowned musicians will also surely be engaged to entertain and bring back crowds in the very near future.

Leaving your shoes outside the door is an important custom that comes down to us from long before the Christ event, one maintained in many eastern cultures for thousands of years.

It has also been long observed in the Jewish tradition wherever in the world Jewish people have lived and migrated. It is notated in both old and new testaments of The Holy Bible.

Removing dusty sandals was certainly a custom for the ancient Greeks and ancient Romans when they entered their temples or houses, as well as washing their feet before proceeding past the Atrium or entrance. To not do so would have been an insult on your house or your welcoming hosts. It was all about manners and hospitality. Canterbury Cathedral Nave, with the great screen dividing off the sacred space

Great cathedrals and churches originally constructed to provide great ‘public’ spaces in towns all over England and Europe and in the new world in their day also served the greater public as the giant market economy places of their day.

As well as accommodating the population in times of trouble they also provided a covered place where normal daily life could continue, especially if difficulties relating to politics, priests or the environment were in play.

Many great cathedrals were originally designed so that the whole population of the town they protected would fit inside. Naves were used for the daily market, for all sorts of meetings, as law courts, as well as family and community celebrations.

The sacred area of a great cathedral was initially screened off from the nave so that priests could perform rituals associated with the mass and worship in private. By keeping the mystery of the ceremony behind the taking of the sacrament going for centuries, they safeguarded the church and its future for a long time.

Today all has been laid bare to reveal the foibles and failings of our humanity. Whereas for a long time people continued to view the church as a beacon for hope, because of so many lies, deceptions and abuses that have taken place behind its doors the trust of a large majority of its former constituents has been eroded and they have left in droves over the last fifty years.

The department store for many of them today would certainly seem to be a safer alternative if they want to regain their equilibrium and inner well-being. During the Middle Ages and Renaissance epochs in Europe, popes and priests played political games at the expense of the ‘followers of the way’ of Jesus. In the 18th and 19th century in England and its colonies during the advent of Anglicanism the spare sons of aristocrats often became involved in the church, with or without having a vocation.

This often resulted in an arrogant attitude; one that became ingrained in many congregations. This kept people who wanted to believe in a loving and giving God either away, or at arm’s length, narrowed minds and in some instances, also seemingly championed mediocrity. During the last 100 years protecting priests preying on, and abusing young children in all the Christian faiths has taken a huge toll. This has meant that a very high price has, and will continue to be paid by churches in terms of re-gathering followers, which isn’t likely to happen without a miracle.

Should we ask the question? Do they now need to ‘die’ in order for the Christian faith to be re-born’?

Christianity isn’t supposed to be about buildings.

A Church is also not a building, but its people. They are supposed to be about a way of life following the teachings of Jesus, which were clearly defined and very simple in principle for the early ‘followers’ of his way; do unto others as you would have them do unto you. The great ‘sacred spaces’ where so many used to pause and meditate to regain their headspace are notably empty. I always pause when I go into the city of Melbourne in the cool long nave of St Paul’s Cathedral, a wonderfully designed ‘sacred space’ and a good place to regain my headspace.

A visit recently however revealed a lethargy exists; the Cathedral guides were sitting chatting to each other rather than taking an opportunity to talk with visitors and to evangelize.

As Christians you would have thought they would want to perform this service in these very difficult times. It was very disappointing to say the least – such opportunities lost can never be re-claimed.

We know the human spirit needs to be nourished spiritually and often, so it seems Selfridges has all bases covered.

They are seeking to nurture the body as well as the soul, with their No Noise initiative. In one instance it also takes a closer look at how better food can foster better mental well-being with Food For Thought.

The Food Halls in the Oxford St London and the Trafford stores showcase initiatives to promote clean, simple, honest food from the best suppliers, most of them British – from the Juice Club operated by a new outfit led by world-class mixologist Dan Thompson, to a nutrition clinic headed up by Julie Neville, nutritionist and wife of footballer Phil Neville who will be bringing her Win Naturally bespoke approach to healthy eating to Selfridges.

They have also linked the No Noise event to a coming art show, and curated a ‘Quiet Shop’ that offers customers a carefully selected range of products that encourage ‘considered purchasing’, from a capsule collection of unique symbolically de-branded items to everyday stationery and wardrobe staples promoting a purer approach to design.

They all celebrate the beauty of a minimalist aesthetic and focus on a product’s quality and function rather than its packaging or advertised image. Other products following in Selfridges’ footsteps include Beats by Dre, Crème de La Mer, Levi’s and Marmite. The brands that have removed their logos are supremely confidant that the product alone is enough and that the logos are so beautifully designed the customer will recognise them without the need for a brand name.

Alongside the exclusive de-branded collection, the special edit of fashionable staples will be hand-picked from the Spring-Summer 2013 ready-to-wear by brands including Acne, Cos, Maison Martin Margiela, Sportmax, Yohji Yamamoto, Jil Sander, Ann Demeulemeester, Mugler and Diesel.

Another key feature of No Noise at Selfridges is an exclusive partnership with Headspace, the original mavericks whose approach to meditating and applying the discipline to everyday life is being seen as revolutionary.

The new Silence Room presents a fresh take on the original model but with the same purpose: providing an oasis of quiet for those eager to take a moment to pause and switch off. Designed by architect Alex Cochrane, this very quiet space facilitates a mental detox.

Selfridges has stated that it is reaffirming its commitment to creating shopping experiences that go beyond retail. Exclusive interactive Headspace content is also available on www.Selfridges.com to allow customers to engage with meditation anywhere, at any time of day or night, at the touch of a button

Am sure the original Greek architects would not really understand their iconic classical architectural pedestal supporting a Selfridges shopping bag. Raising anyone or anything for that matter up onto a pedestal just about guarantees its downfall because there is then only one place to go – fall off!

Genius and Ambition: The Royal Academy of Arts London 1768-1918 illustrates the influence of British art on Australian art is well worth a road trip to Bendigo