Commencing on 28th February, 2015, Nordic Cool: Modernist Design showcasing the elegant simplicity of works from the National Gallery of Victoria‘s own collection.

Among the Scandinavian designers on show will be Alvar Aalto represented by his Armchair 41, which demonstrates the radical possibilities of moulded birch plywood.

Wonderful objects like this stunning teapot by Scandinavia’s most famous silversmith Georg Jensen (1866-1935), whose works with the passing of time have become very desirable, will also be on display.

It reveals how his imaginative nature allowed him to fully appreciate the beauty of the natural world around him, an impression he explored as a young man as he began to investigate his emerging artistic side.

Handling a piece of Jensen silver is as much a tactile experience as one of solely aesthetic appreciation. He became the creator of some of the most attractive silverware during the early years of the twentieth century The fine hammer marks, which are only visible on certain surfaces, the flawlessly smooth polish of others creates a deliberate patination. They allow for the richness of the relief design to stand out and all these effects combine to produce an impact quite specific to Jensen silver.

The exhibition will offer a view of some 100 pieces of ceramics, glass, silverware, furniture, textiles and lighting with a focus on functional beauty in the age and style often referred to as ‘Modernism’.

The works are sure to create a new generation of hunters and gatherers as they feast on a simply sensational array that will include glorious pieces by designers of the 1920’s through to the 1960’s, all working in the discipline of Scandinavian design.

Tony Ellwood, Director, NGV, said, ‘Nordic Cool illustrates the NGV’s great history of collecting design. Many of the works were purchased as contemporary pieces through the Felton Bequest more than sixty years ago, yet they endure as modern design classics and are frequently referenced by contemporary designers working around the world today.’

Two significant new acquisitions of lighting design by the famous Danish designer Poul Henningsen. These will be presented as part of interior ‘vignettes’, including a dressing room complete with Marimekko dress and Hans Wegner’s 1950 Valet chair. Ceramics from key design houses including Sweden’s Gustavsberg and Rörstrand Porslinfabrik and Danish works by the Royal Copenhagen Porcelain Manufactory, alongside silver from the famous Danish manufacturers of Georg Jensen and A. Michelsen.

A. Michelsen, renowned for their distinctively beautiful dining wares, produced much of the everyday tableware’s used by the Danish royal family and are represented in Nordic Cool  through pieces including a Sugar sifter, Tea caddy, Cigarette cup and classic cutlery. A superb example of a wheel engraved glass vase from 1946 showcases the manufacturer IITALA in a design by Tapio Wirkkala. Georg Jensen, Silversmith, whose silver jewellery and table-ware, designed in his own atelier in Copenhagen from 1904, soon enjoyed and international reputation, and epitomises the Scandinavian Jugendstil movement as expressed in Denmark.

He sometimes utilized semiprecious stones and enamel to ornament his objects, yet other times allowing the simplicity of its outlined shape as here, to rule supreme.

Born in the town of Raadvad north of Denmark’s main city, when the family relocated to Copenhagen George could soon be apprenticed to a goldsmith where his remarkable ability with his hands quickly became apparent.

He pursued both drawing and figure modelling classes at night, whilst earning his living by day, finally achieving his dream of being able to attend sculpture classes at the Royal Danish Academy of Fine Arts.

Here is abilities gave him the impression he would be able to pursue life as a sculptor, but fate had other ideas. Family commitments meant that he took on work as a modeller for Bing and Groendahyl Porcelains to make ends meet

The death of his first wife, his subsequent re-marriage and its commitments had made the hazardous income of a sculptor untenable and he had to accept it and move on to become the creator of some of the most attractive silverware during the early years of the twentieth century.

He was nearly 40 when he opened his own workshop in Copenhagen producing only enough stock that would be displayed in a tiny showcase hung on the wall outside in the morning and brought in at night.

His work at this time was a basic tulip-like blossom or pod form, with seed-like trails of silver balls – a stylised image of growth and fecundity that was characteristic of the northern European jugendstil movements, one still popular today.

However his fate was in the hands of a German book and antique dealer Car Dyhr, who was very perceptive. His shop in Berlin sold 90% of Jen’s production until the outbreak of war in 1914.

So successful was the collaboration that shops were planned for Paris London and New York, but World War I would intervene but not before William Randolph-Hearst an American philanthropic tycoon had discovered his work.

His pieces went on show at an International exhibition in San Francisco and from then on life would never be the same.

In the post-World War One period, Georg Jensen’s lack of artistic jealousy enabled him to attract other talented designers to his workshops, regardless of their diversion from, or allegiance to, the prevailing Jensen style and together they all thrived, each gaining reputations for excellence. 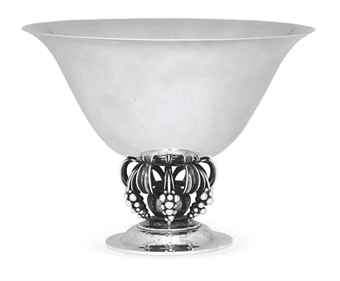 A DANISH SILVER BOWL, DESIGNED BY HARALD NIELSEN MARK OF GEORG JENSEN, COPENHAGEN, 1933-1944 Circular, on circular base with openwork berry stem, the bowl with flaring rim, no. 775, marked under base courtesy Christie’s

Georg Jensen’s brother-in-law, Harald Nielsen became the first of Jensen’s designers to be influenced by the newly emerging European predilection for first classical and then more functional forms. His shapes were generally very plain, with perhaps a single prominent modelled feature.

At the beginning of the 1930’s, the arrival of Sigvard Bernadotte at the Copenhagen works signalled a new departure from the up-to-now quite cohesive Jensen oeuvre. Berndotte’s origins were in complete contrast to Georg Jensen’s own.

Interestingly he was the working son of Crown Princess Margareta and King Gustav Adolf, head of the remarkably able and artistic Swedish Royal Family who have been involved in the world of commerce from that day to this. From the start, Bernadotte’s designs were powerful, classical and innocent of any attempt at naturalism or even abstracted naturalism.

Bernadotte’s other lasting contribution was as a member of the Georg Jensen Board, which soon had to steer the company through fast-changing times, as Europe built up to the Second World War.

In 1935, Georg Jensen died, but he did so secure in the knowledge that the company he had begun in such a small way was now in an unassailable position on the world market, and indeed in such a position that it would weather the storm of six years of warfare and emerge intact and healthy. 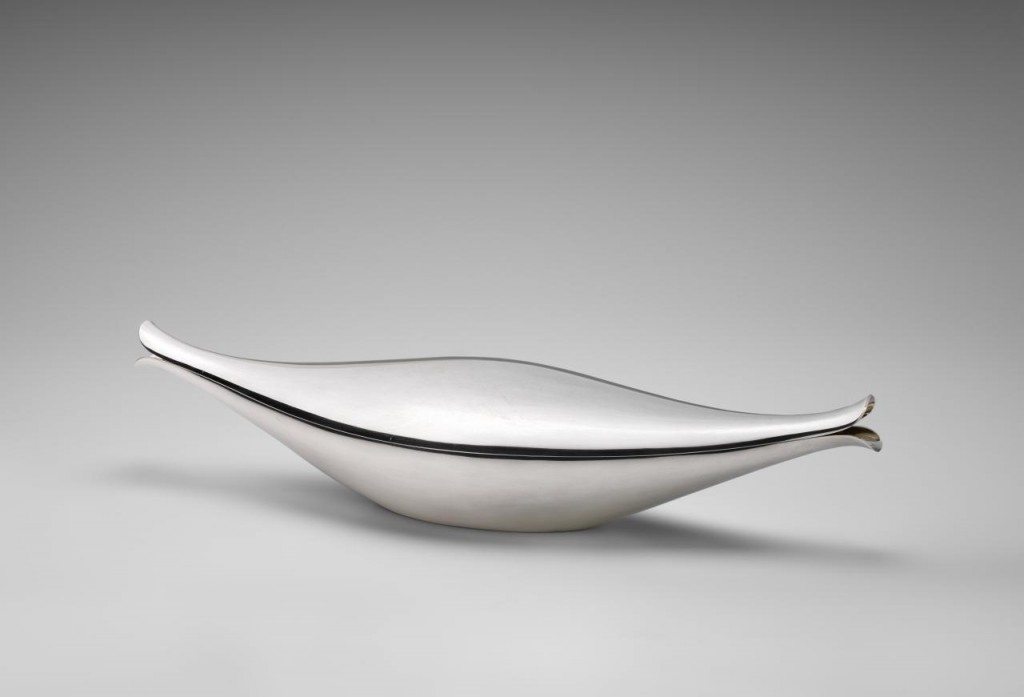 The need for new designers in the early post-WWII years brought the company’s attention to the work of an exciting young artist named Henning Koppel who laid the groundwork for the characteristic elongated, fluid, amorphous shapes found in Jensen silverwork of the 1950’s and 60’s like this stunning iconic silver Fish Dish ensuring it still thrives today.

There will be a program of events during the year

In the eighteenth century women usually painted under assumed male names and often their work was re-signed and copied by unscrupulous collectors and dealers.