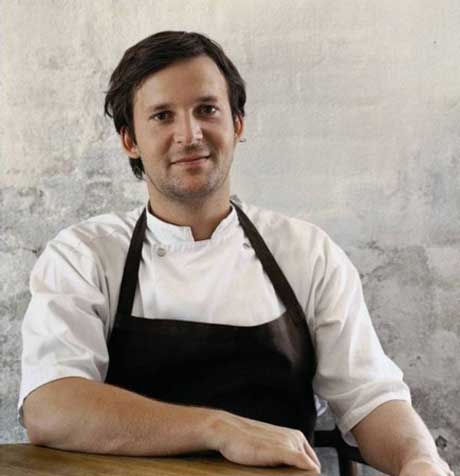 ‘Noma is best known for its fanatical approach to foraging; but there is much more to this ground-breaking restaurant than the mere picking of Mother Nature’s pocket’ said the S.Pellegrino Judges. 2010

With impeccable timing Celebrity Chef Rene Redzepi has just released his new cookbook  Noma: Time and Place in Nordic Cuisine. It is much more than just a cookbook, it’s all about how the creative class is helping to reinvent the world by transforming the local economy.  It is also about Redzepi’s award winning restaurant and the recipes that made it number one in the world in San Pellegrino’s 50 Best Restaurant awards 2010.

For the best in class, Noma is the number one place to eat at right now in the world. The Australian Masterchef 2011 judges confirmed this to their Australia wide audience during the grand finale. Imagine tickets for a tour in Scandinavia will book out, which is a good thing for Europe in the current economic milieu. 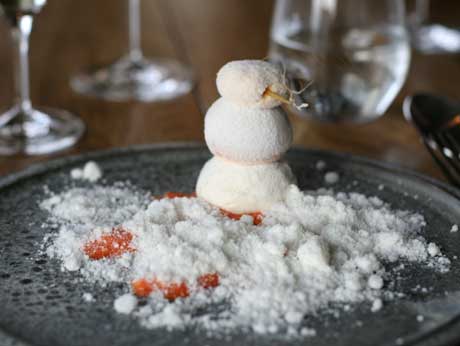 It was Rene Redzepi’s unbelievably challenging ‘Snowman Dessert’ that was prepared by finalists Kate Bracks and Michael Weldon competing to win the coveted title of Australian MasterChef 2011, that caused a kerfuffle. Kate emerged triumphant, but there was very little in it. And, Rene was on hand to guide them both through its preparation, which was more than challenging to say the least. 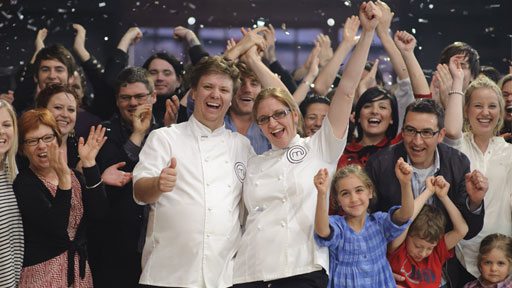 In a cook off that included blasting the food while wearing safety goggles the judge’s gave Kate’s snowmen fulsome praise. “You’ve pretty much nailed it, the number one dish from the number one chef in the number one kitchen in the world,” says Preston. It was a touch of genius to bring Rezepi to Australia to create the final challenge. In Copenhagen Rene Redzepi has been widely credited with re-inventing Nordic cuisine, which ‘experts’ say is more an interpretation of Nordic food than classical Nordic food itself. Rene is definitely a man in the right place at the right time. Noma, his restaurant at Copenhagen is considered the entire package, from flawless execution to an emotive, intense, liberating way of eating. Unlike any other it is a beacon of excellence and an inspiration to many. Noma, on the waterfront at Copenhagen

Rene Redzepi operates at the cutting edge of gourmet cuisine, combining an unrelenting creativity with a remarkable level of craftsmanship. His inimitable and innate knowledge of the produce of his Nordic terroir has made him first in his class. Some have attempted to copy chef Rene Redzepi’s approach, although most have failed.

Restaurant Noma is located in an old warehouse on the waterfront in an urban neighbourhood of central Copenhagen. Once a centre for art and culture, its interior design by Signe Bindslev-Henriksen sets the scene for the cuisine to come. 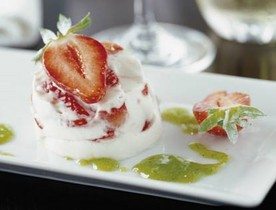 Looking at the food being plated up on the promo offered on the Masterchef final reminded me immediately of French Chef Michel Guerard’s landmark and very fashionable at the time, Cuisine Minceur, which came out in 1976 at Paris and 1977 in English at London.

Hailed as revolutionary, the most exciting idea in half a centry of cooking after a while of delicate foraging and eating it all became exhausting and enough was enough for most. Faced with a backlash, and as quickly as he could Guerard, published his Cuisine Gourmande in 1978 at Paris and London, which was certainly not meant for slimmers. So what we see next from Redzepi will probably set the new standard of cuisine for yet another next decade.

MasterChef producers flew Redzepi in for the Masterchef 2011 event. While he is here no doubt he will also sign copies of his book around the country highlighting the role exquisite cuisine is playing in helping to reboot flailing world economies. 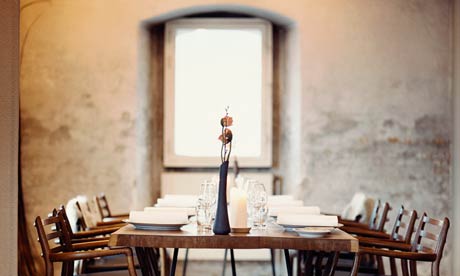 Cooking, cuisine, chefs, cooks and challenges are certainly something Australians seem to enjoy, based on all the reality cooking and renovating show cluttering up our screens. Who needs a good well written drama when you have so many people busy fueling and stoking the fires under the latest and best cookware in the Kitchen.

Redzepi in his career worked at the award winning restaurants elBulli (closed July 2011) and The French Laundry, which is a uniquely American restaurant in California whose chefs have been inspired by the cuisine and the countryside of France.

At Noma diners are served exquisite concoctions, such as ‘Newly-Ploughed Potato Field’, which is painstakingly constructed to express their amazing array of Nordic ingredients. Redzepi’s fascination with giving his diners a real taste of their food’s environment extends to serving dishes on pebbles found in the same fields as his produce. His search for ingredients involves foraging amongst local fields for wild produce, sourcing horse-mussels from the Faroe Islands and the purest possible water from Greenland. 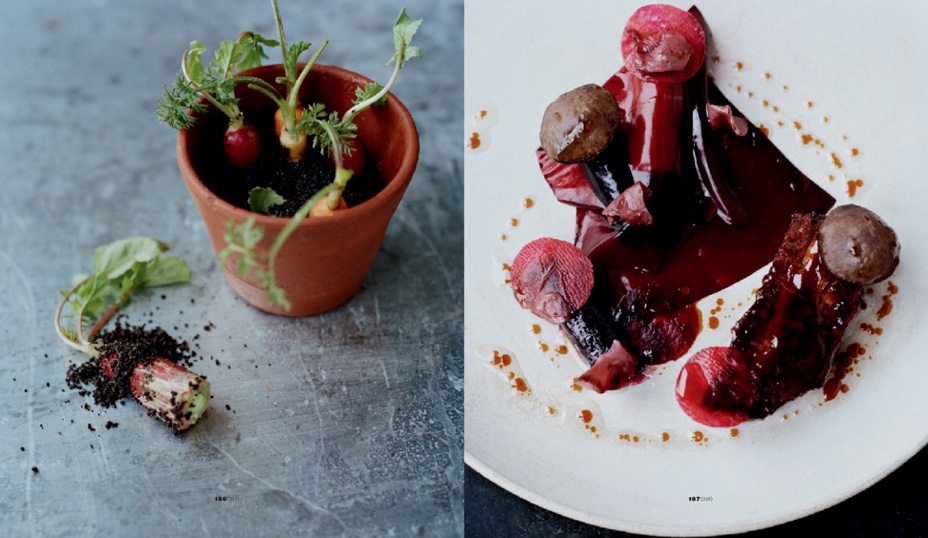 From pot to plate at Noma

Redzepi has heightened the culinary philosophy of seasonally and regionally sourced sustainable ingredients to an exquisite level, and in doing so has created an utterly delicious cuisine.

Noma Redzepi’s book is an unprecedented opportunity to learn about Chef Redzepi as well as Restaurant Noma’s history and philosophy; the sourcing of ingredients; the experimentation behind the dishes; the cultural significance of dining at Noma. It contains ninety of Redzepi’s recipes, by far the most comprehensive collection yet published.

The book will also feature a series of specially commissioned photographs, illustrating the food and atmosphere of Noma, as well as the Nordic environment that lies at the heart of Redzepi’s cuisine.

Noma seems an interesting choice of name for a restaurant offering produce and services mainly to an elite. They have taken its meaning from the Greek nom?, which means feeding, grazing (akin to némein  to feed, graze, consume) so that it sounds like we’re going back to nature. After all, who would ever think of making a mousse out of carrots and building it as a snowman to make a dessert. Yet that is just what Rene and his team did. 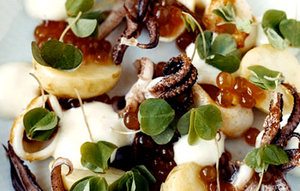 It’s good old thinking outside the square stuff and thank heavens there are those out there keeping the creative momentum going. Mind you, we all don’t have the equipment to make this rare delicacy in our kitchens, or the time to spend three hours (at a fast clip) to complete it for the family after a hard day at the coal face.

But let’s not be hasty or harsh. It is only in the pursuit of excellence in all things that our society and global culture will continue to evolve.

Stretching ourselves to the limits and beyond is what makes humanbeings so interesting. And if we are to get out of the global economic mess we are all in together then we need to emphasize the importance of human activity and creativity in community, much more than you might have ever imagined before. Today it is in our cities that the global economic recovery will arise. It will be fashioned in urban centres of excellence where technological infrastructure, diversity of talent, and tolerance will attract creative people to gather so that they can become the new age contemporary cities core population. Then as the creative vanguard prospers so will an economy that is driven by inventiveness.

Thank God for Tea! What would the world do without Tea, How did it exist? I am glad I was not born before Tea’… I am not alone in enjoying, a beautiful brew