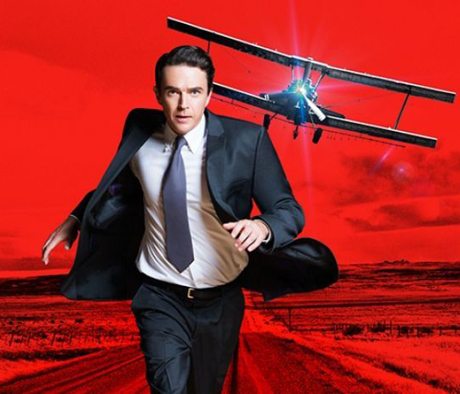 ‘In the world of advertising, there’s no such thing as a lie. There’s only expedient exaggeration’*.

Based on the classic cold-war thriller, North By Northwest the stage show played to a Sold Out house at the midweek session I attended,

Adapted for MTC on stage by clever Carolyn Burns and renowned Director Simon Phillips this excellent production with a fine ensemble cast and exceptional crew, was quite simply sensational.

Must say I haven’t enjoyed a live performance so much in years. Well deserved, the cat calling, thunderous ovation and broad smiles on everyone’s faces at the end certainly told a tale of its own. There is not one person I spoke to afterwards and that was quite a few, who had not had the time of their lives.

Director Simon Phillips and his design and technical team deserve awards. Their clever creative use of props, video technology and tiny models to recreate iconic images and amazing effects all within plain sight, drew the audience into the action.

The sound effects and segments of the original musical score by Bernard Hermann, created both suspense and intrigue. Interestingly the two ladies sitting next to me had never seen the ‘Hitchock – Cary Grant film’ so their delighted reaction was completely infectious.

The production was slick, smarmy and carefully stage-managed, a marvel of timing with everyone playing their parts with great swagger and style.

From start to finish the cast revealed their capacity for vigorous activity to great effect. Most members had numerous roles to fill besides acting, which included being extras, scene changers and technology wizards.

This was the glamorous espionage thriller with a pace that never faltered, an ingenious but simple set, which met morphed into so many different configurations. Just before interval the way our hero was buzzed in that iconic scene with the crop dusting plane brought forth loud spontaneous applause.

Actor Matt Day, who I must say I have admired since his ‘Country Practice days on TV. was a stand out as the debonair handsome surprised and slightly bemused Madison Avenue Advertising man Roger Thornhill.

Slick and sharp, Matt Day is a modern version of Roger, his own man, which I admired and respected; anchoring the committed cast with his considerable talent.

“I’m an advertising man, not a red herring. I’ve got a job, a secretary, a mother, two ex-wives and several bartenders that depend upon me, and I don’t intend to disappoint them all by getting myself “slightly” killed”.

Matt Day’s commitment to the drama of it all was compelling.

He wore his now famous Cary Grant ‘Kilgour’ look alike bespoke Saville row suit with enormous dash and style. He was shot at, chased in it, rolled around drunk in it, and still managed to stand on the side of the road in a desert hands in pockets looking as cool as a cucumber. Loved the exceptionally clever way the complete cast attributed the play to the movie at the beginning. Wonderfully achieved.

Playing multiple roles throughout they were all at the best when in inspiring, supporting and working in concert together.

Sofas turning into taxis, office chairs and desks fulfilling many functions and how the setting and lighting is managed is all very cleverly and intelligently constructed and staged.

There are the ‘double entendres’, the quickness of the pace, the glamour of the fifties fashion, the sardonic wit and the mistaken identity, all are mesmerizing. George Kaplan aka Roger Thornhill’s relentless passionate pursuit of the captivating mysterious blonde double double agent Eve Kendall becomes intoxicating as they proceed. Above all the MTC’s North by Northwest on stage is great entertainment. It is put together with just the right sense of tongue in cheek fun.

Although I can just see arty ‘purists’ giving it a hard time because there is no doubt it will be ‘popular’.

So what is wrong with that? With house full signs up the cast and crew are all paid for performance and the MTC are able to have funds for further productions. Popular can’t be all bad surely!  Its all about getting the balance right. Elite, but not elitist.

Have attended a lot of theatre in my time and in my experience its only great acting, brilliant staging and innovative creativity that makes something popular in the first place.

Here it is more than well deserved. The brilliant cast were all at the top of their game at my performance. Amber McMahon as Eve Kendall captured and held both our hero, villains and audiences attention from the moment she produced her seductive Marilyn Monroe styled walk all the way to the end

Matt Hetherington who has had a successful high-octane career since his The Voice days, was a suave smooth Phillip Vandamm with Lachlan Woods channeling the slippery Leonard Rees-Bossard.

The senior members of the team Tony Llewellyn-Jones as the Professor and Deidre Rubenstein as Clara Thornhill brought their wit and experience to bear while working so hard alongside Lucas Stibbard, John Leary, Justin Stewart Cotta and Sheridan Harbridge. All their heads must spin during the performance they have so many parts to play… it is all such terribly clever stuff. Everything is meticulously choreographed so that each character enjoys some very special well deserved classic ‘cameo’ moments of their own.

It is a more than impressive ensemble work.

At intermission based on their crop dusting experience as its finale everyone in the foyer was kept busy anticipating how the designers would interpret the famous ‘Mt Rushmore’ scene at the end.

How they did more than lived up to everyone’s expectations I am sure. It was pure theatrical genius!

Eve Kendall: [Hanging by their fingers from Mount Rushmore]

What happened with your first two marriages?

Roger Thornhill: My wives divorced me.

Roger Thornhill: They said I led too dull a life.

This was a performance all the people attending were in love with from start to finish.

Talking to small groups as I do, before during and after the show there was not one who did not give it 5/5.

One enthusiast said very definitely five and a half out of five.

Don’t want to give off too many spoilers…for goodness sake if you are visiting or living in Melbourne give yourself a treat.

Grab a ticket and go along and give yourself up to enjoy the MTC stage version of North by Northwest.

Now showing until the fourth of July (someone has a sense of humour), it was very well done by all.