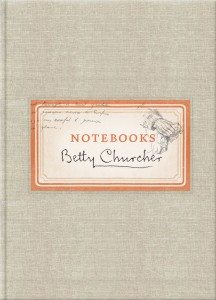 Having been an avid, voracious reader of all types of texts since I was a very small child today, in reality it takes a lot to get me excited about a book. I have read many of the classics, lots of fabulous novels, masses of thriller fiction works and non-fiction works, including autobiographies, biographies, books on architecture, interiors and all matters relating to art and design, as well as books for collectors, creators and connoisseurs. That doesn’t take into account ancient history, business books current of our times and all sorts of out of print works relating to gardens, music, fashion and style.

My favourite book of 2011 stood head and shoulders above the rest, and there were many wonderful publications that year. Betty Churcher’s Notebooks was filled with the delightful and informative sketches that she made. They appeared alongside an image of the painting she’s describing.

The text was extremely erudite, introspective, retrospective and, in so many ways put my own life into perspective. It was a truly divine publication, beautifully case-bound, its rugged handsome linen cover ensuring that just holding it is a wondrous experience, which I personally responded to.

Notebooks proved so popular it was re-printed three times in 2011, the year it was first published.

Now Betty is releasing her new publication Australian Notebooks on April 1. Knowing what happened last time, I just had to jump on line and pre-order it today from Book Offers - can’t be fooled on April Fool’s day.

It’s sure to be brilliant. With her wonderful wit, humour and sense of fun, Betty Churcher revisits some of the artworks she most cherishes, a seminal Picasso, early works of the Heidelberg School, and a striking portrait by Lucian Freud.

Betty Churcher is once again, inviting us to look afresh at the treasures that can be found in Australian galleries. She should know.

What she has contributed to the world of art and culture in our country over her lifetime has been very well done.

Discovering works of art with Betty Churcher is a positive, completely wonderful and transforming experience. Her favourite artists have that je ne sais quoi, or indescribable intangible quality that makes them both very attractive and enormously appealing, as they simulate the artists reality of their world in constant flux.

In the introduction to her wonderful Notebooks Betty Churcher reflects on her life and times, those people who have shared it with her and, what they have meant to her.

Being told she ‘tried too hard’ certainly rang a gong for me.

You always enjoy something so much more when you emotionally plug into the experiences of the protagonist.

But loving her Notebooks is so much more than all of that.

It’s about a heightened sense of expectation and a true, eager delight as you turn each page. It is about the sense of being on the outside looking in at something completely rare and wonderful. It is about being the beneficiary of a unique insight so graciously formed.

And, it is about a wealth of knowledge lovingly translated and encapsulated with meaningful words that will stay with you, just as the memories of the works she discusses will continue to aid her connection with them. In 2003 following a stellar career Betty Churcher was told she was likely to lose her sight. By 2006 it had degenerated greatly and she lost the sight of one eye and the second was in trouble too.

She took off on one last trip to sketch those works of art she had so loved and admired during her lifetime, because she couldn’t imagine a world in which she might never be able to see them again.

By drawing their details she knew they would be indelibly etched into her memory. In the process, and by getting up close and personal, she discovered and recorded some of the special techniques that the artists had used in their creation.

Betty Churcher has surmounted most of the challenges thrown up at her since her very interesting childhood. This was when she discovered a capacity for drawing, one that would stand her career in a creative world in good stead. She left home at 21 and did not look back, only forward, as she went overseas in a passionate pursuit of art and life and to find her destiny.

Notebooks is a highly intimate journey, one you feel privileged to be part of.

Betty was born pre-war at Brisbane and fled Brisbane for overseas until finally, she returned. She is a member of the Clan Cameron, as am I. We both admire and love St Paul’s passage from The Holy Bible Corinthians 1:13…

“If I give all I possess to the poor, and surrender my body to the flames, but have not love, I gain nothing… love never fails”.

Betty no doubt saw Reg Livermore on stage in person chained to a kitchen sink in Betty Blockbuster, an affectionate title she inherited during her career because of her love of ‘blockbuster’ exhibitions and movies.

I just love her keen eye and meticulous attention to detail; her lively observations, which are so lovingly recorded. They provide a unique insight into the colour preferences, style techniques and thought provoking processes of their artists.

I like the way she confesses that in some cases, she has revisited her favourite works again and again. This is a temptation I also find hard to resist when possible, because it allows another encounter so that yet another aspect of the work might shine through and strike you down. The Death of Actaeon by Titian (Tiziano Vecellio)

After you take on board all that she does have to say the notion occurs to you that next time you encounter something special you will be all the more determined to linger longer and look at it with completely fresh eyes.

Her visit to the National Gallery at London was particularly poignant, being able to access its great works alone ‘after hours’ must have been a powerful experience.

Of all the galleries I have visited this remains my all time favourite, as all the works seem to have been embraced by a loving hand, in the way they have been chosen and displayed.

There is such a mood of permanence about this place, which probably has as much to do with its style of architecture as it managing to not be bombed out of existence during World War II.

Betty Churcher reminds us of how, during the London blitz the works were removed to the safety underground of a Welsh mine, not Canada as some had proposed. Winston Churchill told the then director Kenneth Clark to ‘Bury them in caves or in cellars, but not a picture shall leave these islands‘.

One can hear him say it loud and clear with that fabulous commanding voice that he had. He was so feisty and fierce about defending the ancient Isle of Albion to the end. For him to remove its most famous treasures would have been a defeat.

Feeling ‘starved’ from not being able to access regular doses of their art, Londoners demanded they have an opportunity to see at least one now and then. And so the “Picture of the Month” program was born, ensuring that at least one great work was sent home to London each month from the mine.

What a wonderful message: one precious piece of past human history helping people of the present to be inspired to fight on. The Death of Actaeon by one of my fav painters Titian (Tiziano Vecellio) is a wonderful comment on the Greek myth, that has Artemis (Diana to the Romans) chasing the mortal hunter. He unwittingly looked upon her beauty, while she was bathing naked in a stream deep in the forest.

She had him torn to death by her dogs who think he’s a stag as she has transformed him. Painted when Titian was in his 80’s this work was unfinished, according to some, but it is still full of intent, and startling in the dark mood it manages to purvey of how the dastardly deed was done.

Betty Churcher’s Notebooks are ‘heavy’ with intention, the illustrations reproduced gorgeously, and the personal notations and sketches truly delicious. It is an entirely engaging read and every single page is an adventure in the evolution of art, design and style. It is also about being a voyeur, seeking pleasure on the sea of art by trespassing silently into a world where the art of pleasure becomes a serious business.

I especially responded to Betty Churcher’s thoughts on the amazing work of Spanish artist Diego Rodríguez de Silva Y Velázquez and his most mysterious painting, Las Meninas in Madrid. Considered a masterpiece, it continues to raise many questions that will probably never be answered. Then there is his imposing portrait of Pope Innocent X painted in 1650, that was described in 1966 by English artist Francis Bacon as ‘one of the greatest paintings in the world’.

Her descriptive passages are truly delightful; one fine example about Rembrandt von Rijn says “In his sagging flesh and ageing skin he can record the many disappointments and idignities that he has been obliged to stomach over the years – but the set of the mouth suggests that he regrets nothing”.

As I suspect she doesn’t either.

In her Notebooks Betty Churcher travelled from shadow to illumination as she completely fleshed out the subject matter of her most admired works brilliantly.

She highlighted their strengths and weaknesses and captured their very essence with her wonderful prose.

Australian Notebooks her 2014 publication is also available to order NOW

NB: Betty Churcher dedicated Notebooks to her grandchildren, who are sure to gain an appreciation for art, and to learn what art is, from their grandmother.

Last month the Pinchgut Opera at Sydney announced some of the Casting of Castor & Pollux, with a little help from Mozart, for their production at Sydney in December 2012.  American Jeffrey Thomson, who has been based in Paris for the past few years, will play Castor. Now they have…