April 15, 2019 will go down in history, as the day the great Cathedral of Notre Dame at Paris went up in flames, causing extensive damage to its historical structure.

Undergoing renovation, the near complete loss of this the most treasured of many iconic heritage world landmarks, brought about a great outpouring of emotion by the people of, and in Paris at the time.

Glorious singing broke out as the fire raged.

Many people had gathered together, willing the fire to be brought under control by fire fighters, before it caused irreparable damage to a building, which is at the heart and soul of the French nation. But why, so many were asking?

Cathedrals have become ‘big business’ around the world, as people flock to see their many wonders, marveling at what others achieved with their imagination and their hands.

Notre Dame is a building which has been all about people, faith, hope and love throughout its long history. Paris in ancient times started as a town, which became a city only because it built a great cathedral. Steps leading to the entrance Chartres Cathedral in France

A Cathedral takes its name from the Cathedra, the seat or throne of the Bishop responsible for the pastoral care of its people, for whom he is the chief shepherd.

For hundreds and hundreds of years, people slept in them, talked without whispering, brought in their dogs and sparrow hawks, held markets and meetings about matters not necessarily concerning religion.

Some were also used as great centres for education, such as at Chartres Cathedral in France, where a school of philosophy was devoted to the writings of the Greek philosophers. The 800 year old Cathedral of Notre Dame as seen from the dining room at the 400 year old restaurant, Le Tour D’argent, Paris

Sociologists have many ideas for why the comfort of the past seems never to have been more appealing for us, as we endeavour to invent and continually imagine the future.

In many ways we are all in awe of the amazing building achievements of our ancestors, especially when we re-examine them today with all of our 21st century advantages.

One thing we do know about is that heritage buildings like Notre Dame make for a visual feast, one which most people want to relate to.

Architecture is the art of enclosing space, and from antiquity until the end of World War II in the twentieth century a lifeline of continuity connected the many and varied architectural design styles. During the middle ages in Europe, people in many states witnessed a spectacular flowering of religious architecture.

Zeal and emotion drove the workers on as they acknowledged the privilege of building the house of God.

When cathedrals were being built an important aspect of the original intent of having a large nave, was to provide security and help for the community they served.

If 1000 people lived in the town, the cathedral was built to house at least that many souls.

At Amiens in France the entire population of the city of 10,000 people could fit into its great cathedral, which covers some 7,700 square meters.

It would not only shelter and save them in times of attack or storm and tempest, but also offer them a sanctuary in which they would go about their daily business. It was a building for, and of the people. 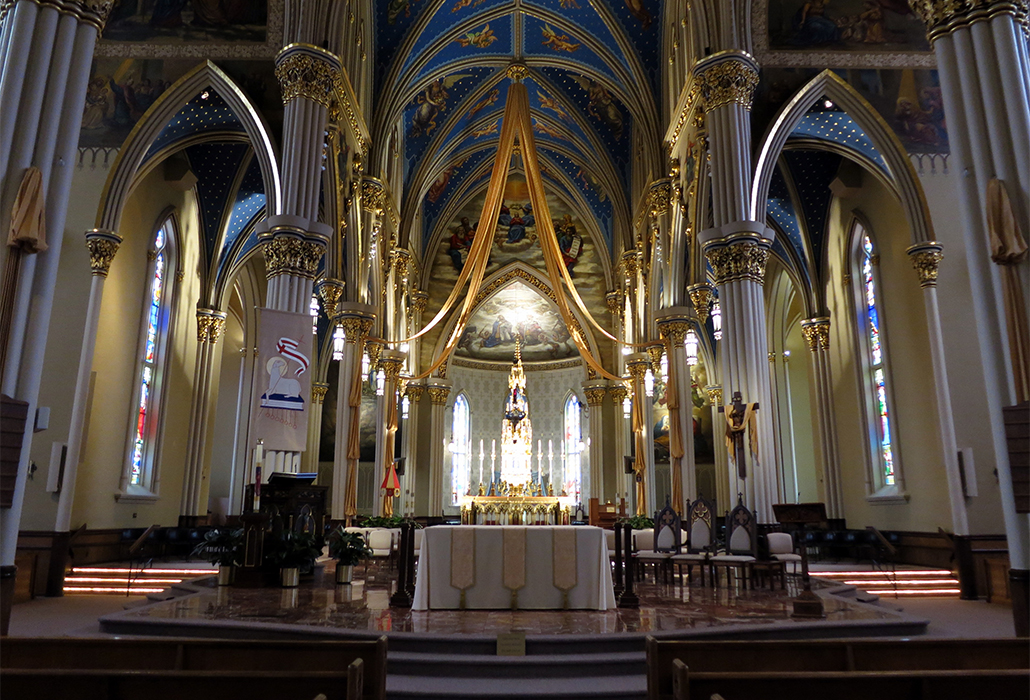 The area called the ‘chancel’ is architecturally historical, an elevated area where a person in authority would stand to be seen by all as he offered advice, dispensed law or enforced it.

The Cathedral’s association with law and order, still celebrated in annual church services today, means a Cathedral also became a place where hope always sprang eternal for all those who entered its doors. The great cathedral at Amiens, France

In France between 1050 and 1350 more stone was excavated than during the entire history of Ancient Egypt, to complete 80 cathedrals, 500 large churches and some tens of thousands of parish churches.

A settled capital, a coronation church and a dynastic burial place were signs of a stable monarchy in France, which first achieved these ideals in medieval times. Jesus, architect of the universe

When and where the experience of life, space and time was very different to the way we experience these phenomena today.

The formation of Cathedral buildings was based on principals of harmony and order in the universe and reflected the beliefs and values of each age in which they were conceived. For centuries a strong connection between the commercial strength of a city, its civic independence and the building of large churches reflected the spirit of the bourgeoise.

They played a decisive part in their creation, with local men also inspired by local patriotism and by indulgences granted to those who helped build the house of God. 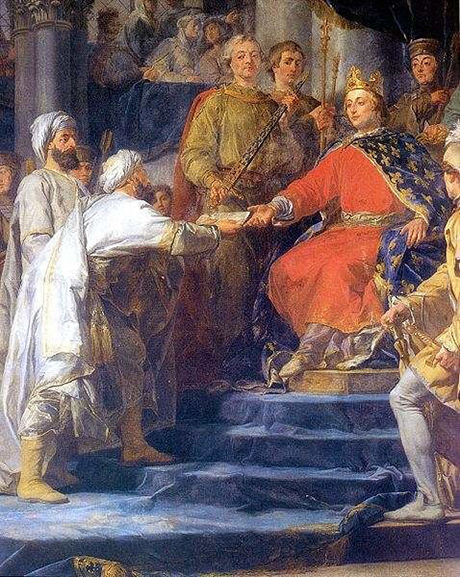 It had become the political capital of the Kingdom, the seat of the Chancery, the Parliament and Audit Chamber as well as the King’s Palace, now destroyed, which was reputed to be a splendid sight.

France had become very rich and powerful, aided by its privileged relationships with the Middle East, particularly Constantinople following that town’s recapture by the Crusaders in 1204.

It was because of this connection King Louis was able to purchase for 135,000 livres the Crown of Thorns, reputed to be worn by Christ at his crucifixion. Stained Glass in the Abbey at St Denis, Paris

For the very pious Louis IX, a model for all Christian Kings, this was a splendid opportunity for him to affirm his personal devotion to Christ by making his kingdom a beacon of western Christianity, while at the same time, supporting the endangered French Empire.

When the king paid reverence to the crown of thorns he would hold it aloft, standing amongst statues of the apostles as silent witnesses to the ceremony, it must have seemed to the observer as if the king was at the center of an earthly representation of a heavenly Jerusalem.

On display in the lead up to Holy Week, the relic fortunately, along with some other works, is among those saved.

Paris during the reign of St. Louis became the home of an internationally renowned university, equally an intellectual capital as well as an artistic centre, where all the courtly arts were practiced. 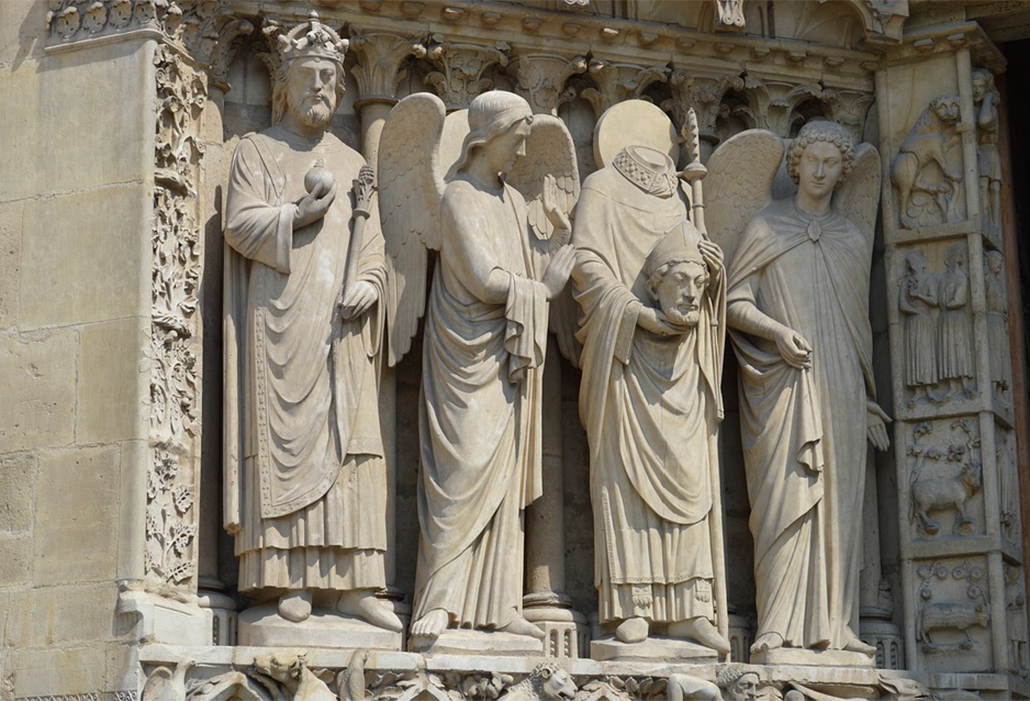 Statuary, Portal of the Virgins, West Facade of the Cathedral of Notre Dame

These included sculptural relief and statues, working with gold and silver, tapestry making, ivory working and illuminations. Building projects as prestigious as the Cathedral of Notre Dame were conceived during St. Louis’ reign. The growth of intellectual life in the twelfth and thirteenth centuries culminated in the scholastic philosophy of St. Thomas Aquinas, whose numerous writings on religious mysticism and spirituality were given overwhelming expression in the building of great stone cathedrals. Scholars today generally agree the change between what we know as the Romanesque to the Gothic style of architecture for churches took place in the middle of the twelfth century at St. Denis, a Royal Benedictine Abbey near Paris where many of its Kings and Queens are buried. Abbot Suger immortalised in stained glass at St. Denis, where the Kings of France are interred.

To become a Royal Master Mason meant to be one of the leading figures in the country. Thomas said ‘beauty is the light of truth’.

The Early Gothic style as developed by the Abbot Suger at St. Denis, together with his team of architects and masons, was a system of great logic and structural ingenuity. It had an emphasis on verticality, pointed arches, rib vaulting, flying buttresses, spacious arcades and high clerestory windows.

Great Cathedral of Notre Dame, prior to the fire on 15th April, 2019

However it was its twin-towered façade, which became an important role model for many churches and cathedrals including that of Notre Dame. 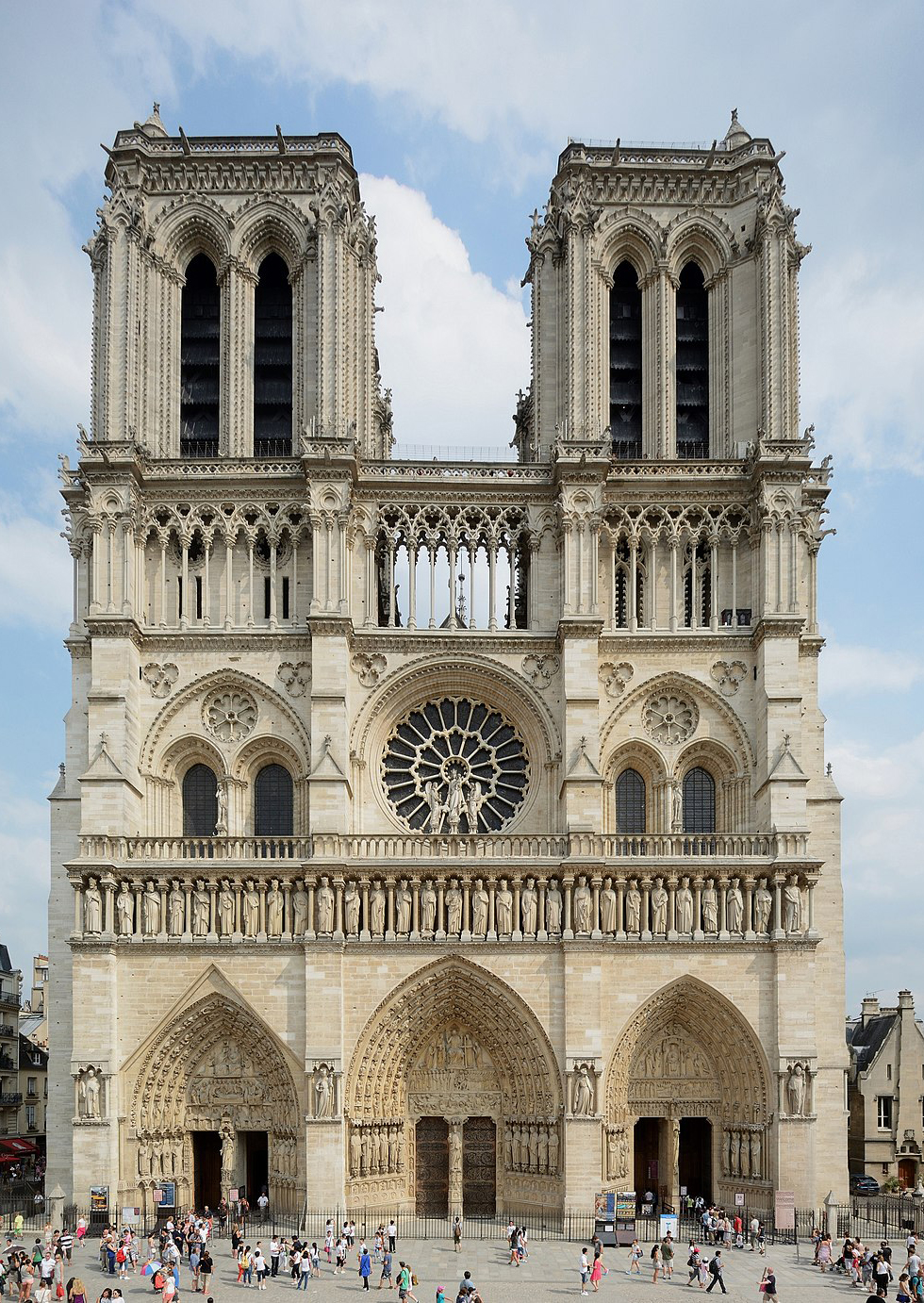 The Twin Facade of the Cathedral of Notre Dame, Paris, a world heritage treasure

Religious themes were being expressed through full-scale human figure sculpture, which reappeared for the first time since the late antique period at Rome.

Man’s new humanity was encapsulated in countless images of the Virgin and Child in which the mother of God was depicted as a youthful figure, smiling.

Metal objects were the most highly valued of all artistic works.

Monks for generations contributed to preserving precious statue-reliquary, as well as altar frontals of gold, candlesticks and crosses.

Liturgical books had covers of gold impregnated with precious stones.

The material value however was not the most important aspect and many objects were at times pawned or melted down.  What was admired was the wonderful skill in fashioning them. 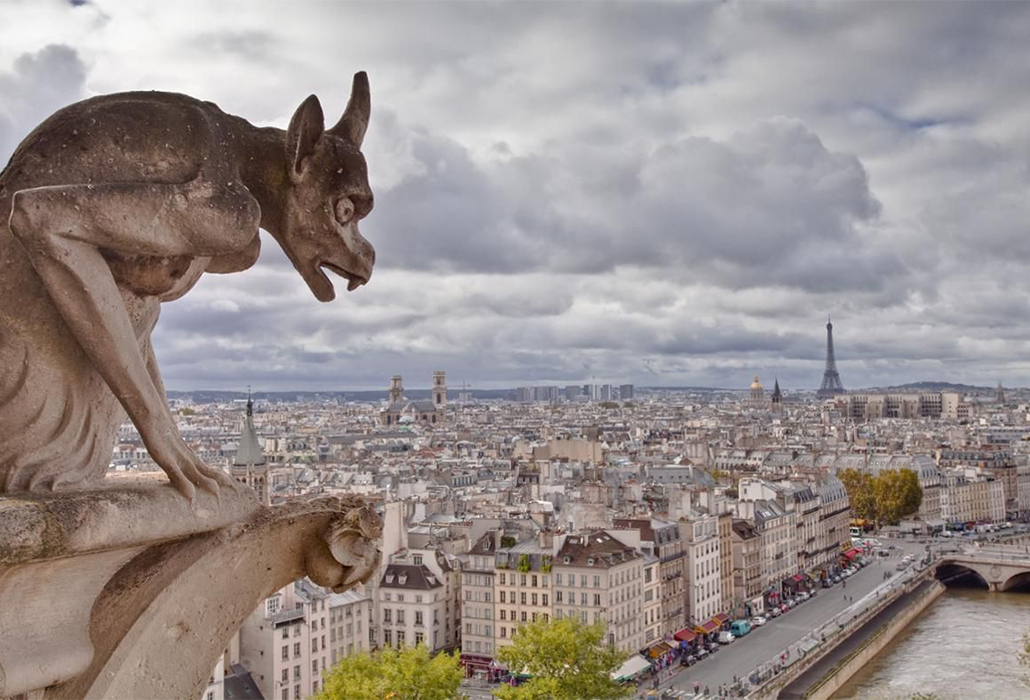 Bernard of Clairveaux, a severe critic of the arts and any form of luxury, when talking of metal objects used such expressions as ‘fashioned with marvelous subtlety of art’ and ‘glistening brightly with gems’ for even he could not hide his admiration for their beauty and artistry.

Faith is a knowledge that dwells within the heart, beyond the reach of proof.

The challenge for us all at Easter, which is fast approaching, whatever our creed or religion is, should be about reflecting on what love means in our life and then expressing it to someone we cherish today and every day thereafter. 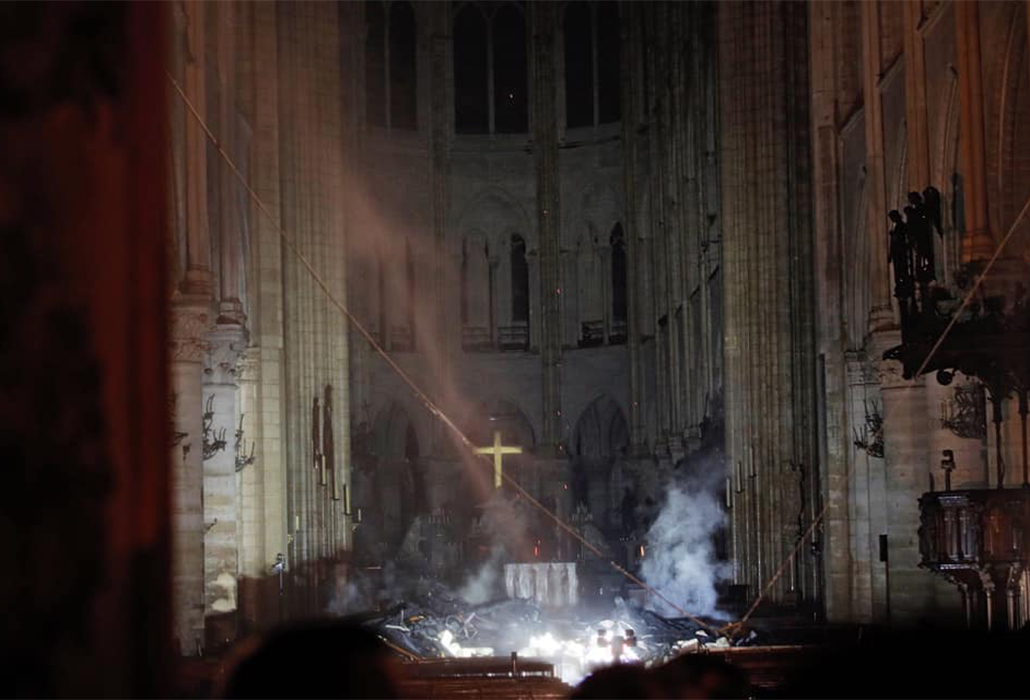 The Cross of Christ, illuminated among the ruins of Notre Dame Cathedral Paris, following the fire that nearly destroyed this shining icon at the heart of France and its people.

The sight of a Cross shining forth as a beacon of hope from the charred ruins of the Cathedral of Notre Dame, will be perhaps one of the most moving of all the sights we have seen this Easter festival.

Join the Twilight Walk & Candle-lighting Ceremony at Brisbane on May 2, 2012 between 4 – 6pm. It marks the beginning of Domestic Violence month in Australia.