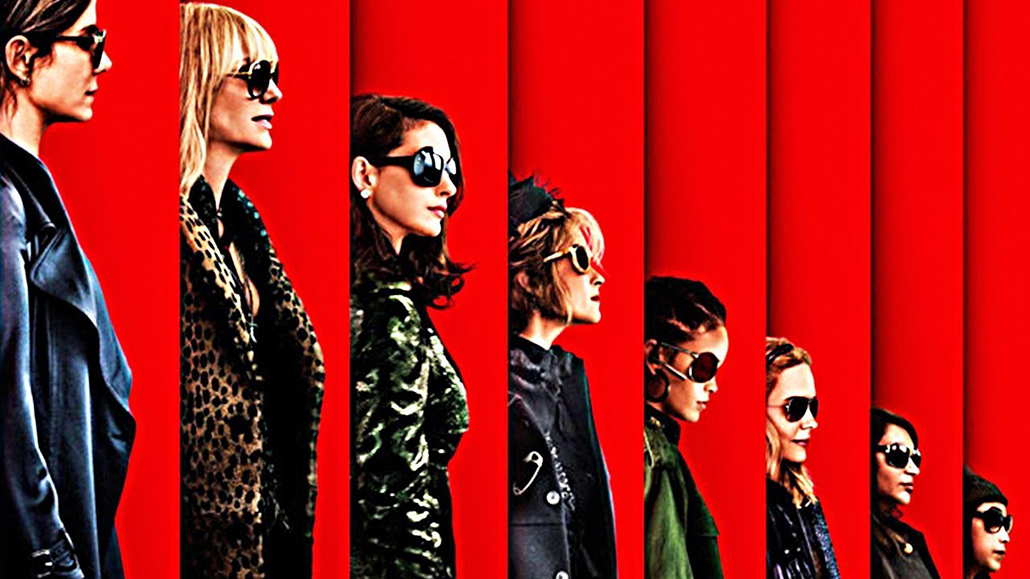 The hallmark of a crime with appeal is robbing the rich to theoretically at least, give to the poor. This notion has garnered romantic connotations for centuries, at least since the legendary days of an English outlaw bandit named Robin Hood, who appeared first in ballads during England’s fourteenth century.

At that time, the richest people were generally local nobility, who were more than often cast in the role of baddies, with stealing from them cheered aloud by the general populace or commoners.

They wanted so much to get their own back as they had so often been victimized; beaten, tortured, charged with offences they hadn’t committed and even killed at the local noble’s behest. So, robbing them of the thing they most loved, their titles, lands and monetary wealth, was, well believed to be heroic. 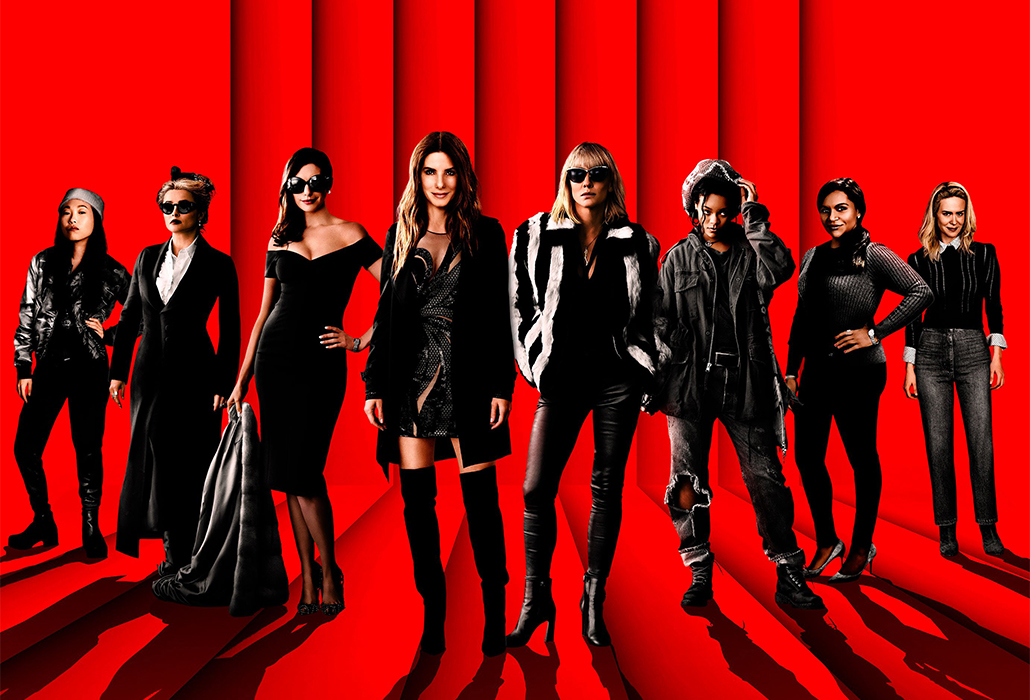 Fast forward seven hundred years to the twenty first century and in the new movie directed by Gary Ross and written by Ross and Olivia Milch Oceans 8, society it seems has gone full circle in a climate once more, where the rich are getting richer and the majority struggling to keep bailiffs from the door and food on the table, enlarging the criminal class.

Diamonds are forever, so the saying goes, and if you come from a long line of the heroic type of criminal class who use their minds more than their brawn, then you are generally very sure of your own worth.

Debbie Ocean (Sandra Bullock) is, and believes her family are special. She keeps herself busy planning the heist of the century while languishing in jail. She wants to ensure that nothing can or will go wrong so imagines every type of scenario. She has after all, all her family role models guiding her success. 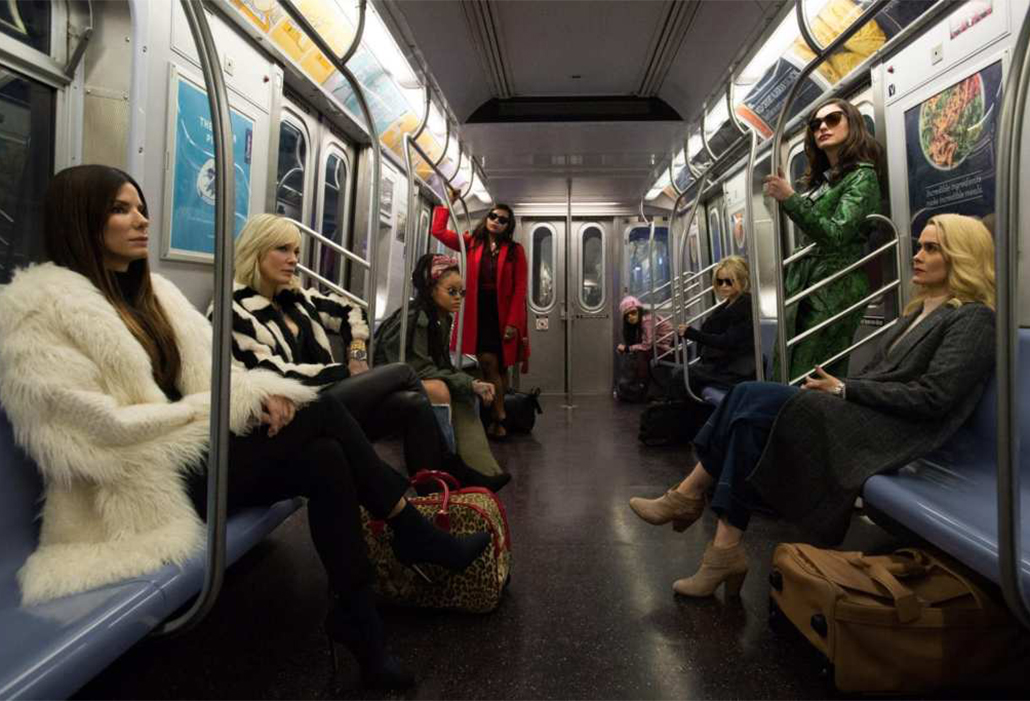 In the case of the first heist she is planning, she has taken 5 years, eight months and twelve days to work it all out. Now it’s game on!

When we meet her the disenfranchised younger sister of Danny Ocean, the master planner Debbie is applying for bail. She is very sure of herself and acting her way towards being released and is more than pleased when she is successful. 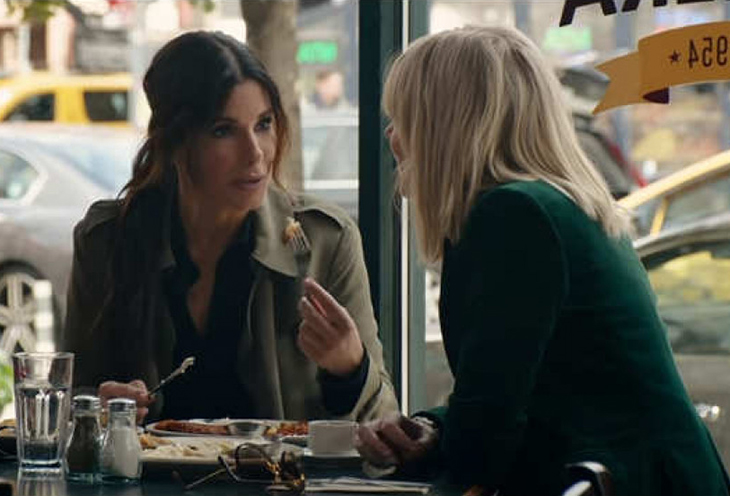 Debbie has to start getting herself organised as soon as she is out because time is of the essence. At first, however, she has to brilliantly teach the next generation of budding women shoplifters how to get away with equipping herself for life on the outside by robbing Bergdoff Goodman within a few short minutes.

All the ladies around me in the first session were laughing very nervously, because they admired so much just how she went about it and the store is sure to have upped their security practices since.

Debbie then visits the mausoleum where her brother Danny is meant to be interred, although we’re not really sure if he’s really inside as she tells him what she’s up to. 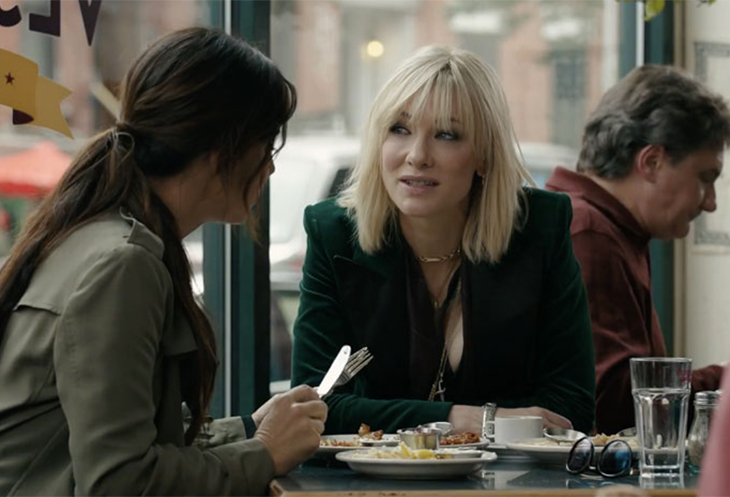 Oceans 8 features a determined group of confident women, led by Debbie and her new partner and accomplice in crime, the woman she knows she can trust, the fabulous Aussie caterer Lou (Cate Blanchett).

Debbie and Lou together gather a hand-picked band of multi-talented female companions around them, who are all willing to help with Debbie’s noble quest.

Debbie tells them how she wants to rob a high profiled guest of her Cartier necklace worth $150 million dollars in plain sight at the annual and very glamorous, Met Gala in New York. 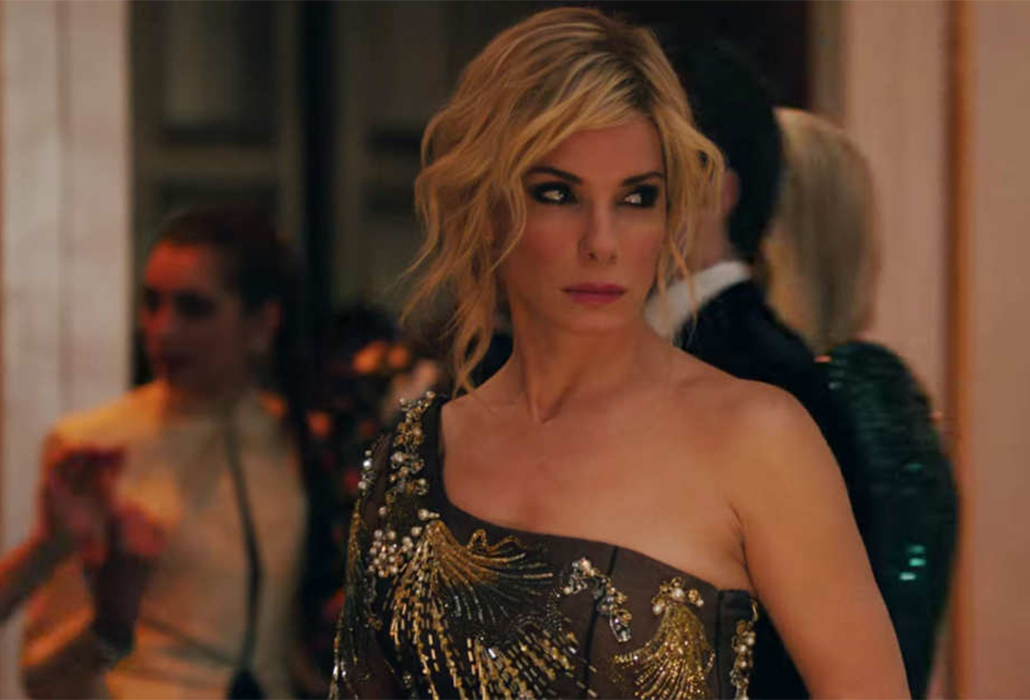 At the Met Gala woman celebrities arrive decked out to the nines wearing high-end couture fashion – designer dresses, together with absolutely fabulous jewellery, much of it lent for one night only by some of the world’s greatest frock makers and jewellers.

Held annually in conjunction with the latest exhibition at the Anna Wintour Costume Institute, the Gala is the greatest once a year occasion in America.

This means scores of reporters, photographers and television cameras and personnel are all guaranteed to be present, which could be a hurdle for some, but not for this team. 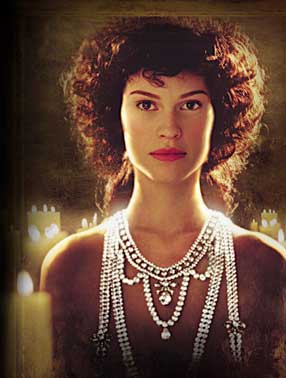 Actor Hilary Swank wearing the diamonds at the centre of ‘the affair of the necklace’ in eighteenth century France.

This year is also going to be a very special year. The theme of the exhibition and therefore the Gala is royalty. So the planners for the Gala arrange to ship some of the most fabulous and historic royal jewels in from Europe as well for display. After all, The Metropolitan Museum in New York has been considered for a long time the number one art museum in the world, and the most secure.

The pieces that arrive to adorn the mannequins, including an amazing four-tier love-jewellery diamond necklace made during the eighteenth century by a French jeweller named Charles Bohmer, are famous.

The French necklace became central to the most audacious swindle in French political history and contributed to the scandals surrounding Marie Antoinette and the outcome of the French Revolution in a crime sometimes called ‘The Affair of the Necklace’. 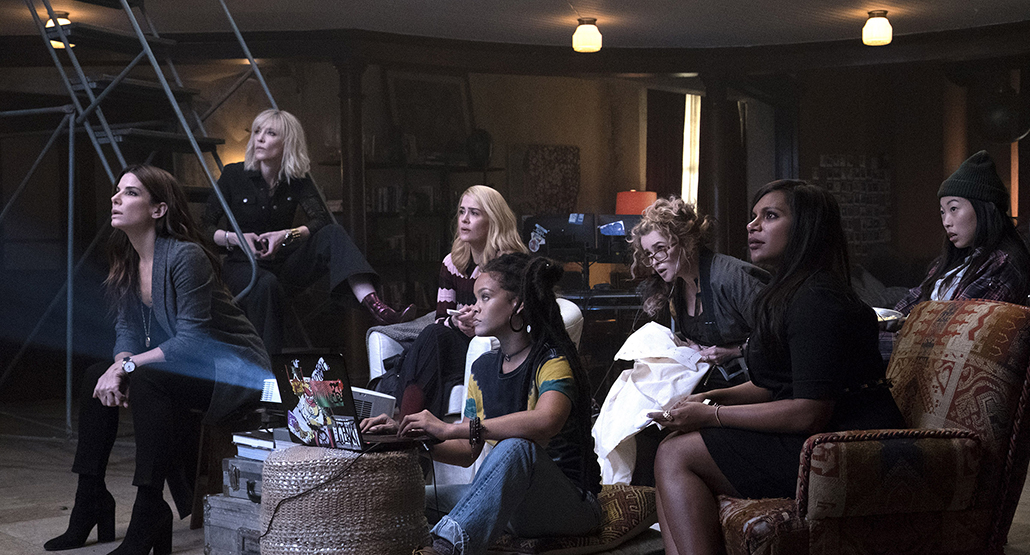 The deliciously eccentric Rose Weil produces the fabulous gowns the girls will wear for the robbery, as well as the gown for the guest they are going to rob. How they manipulate for all this to happen is dizzying.

The actors are all having the time of their lives making this, but I have to say Anne Hathaway is a stand out as the ‘victim’ Daphne Kluger. 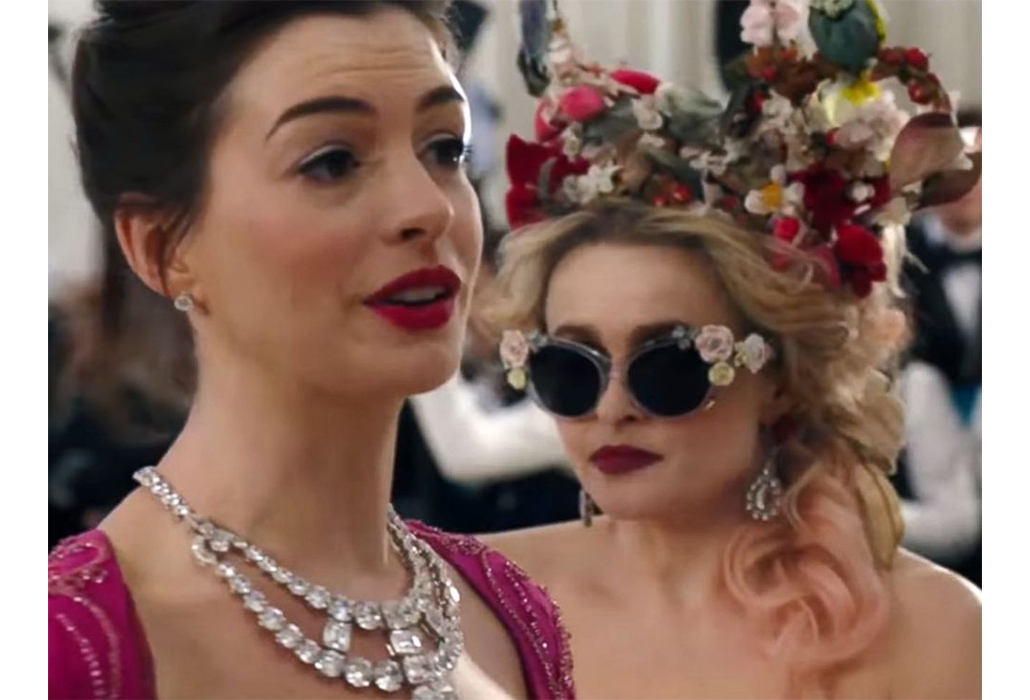 She can be caught wearing a nice enough frock by Rose Weil to the Gala with a cape and a train miles long. However it is the stunning $150 million dollar bit of bling in the form of a necklace around Daphne’s neck that is the seemingly only target for these ladies on the lamb. Basically, it’s hard to keep your eyes off it. 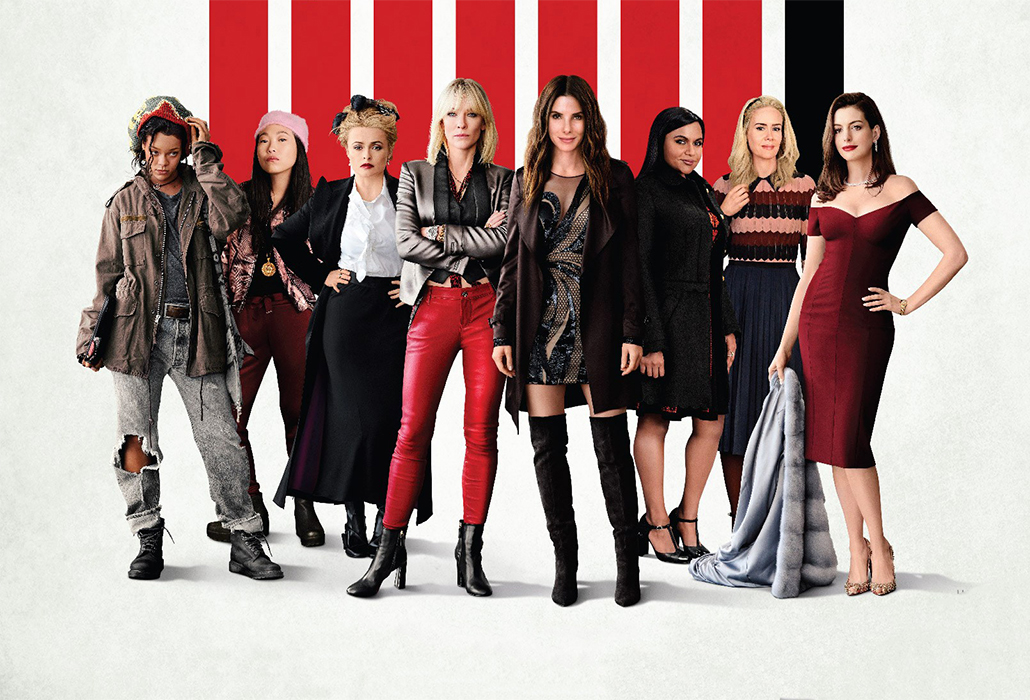 There is so much more to this heist than you first thought. We don’t want to spoil it for you… you’ll just have to go and see Oceans 8 for yourself. It’s a perfect date night out.

Please, don’t take it too seriously, it is meant to be just fun and I am sure there are many holes in the plot. Must admit however I had a ball. The best thing for me was when the girls eventually pull the caper off, just like their male predecessors having just a few challenges they have to solve on the run, you find out the main event was only the beginning.

Fabulous, crazy, smart, complicated, controversial and beautifully nuanced, the girls involved in the take down in Oceans 8 prove having this much fun committing a crime with considerable style is indeed potent.

The Culture Concept Circle is a friendly meeting place for those with an interest in the arts (performance and visual), design history and the continuing development of a sustainable and creative society. It’s all about art, design and style past, present and future. Hundreds of FREE posts are published on…