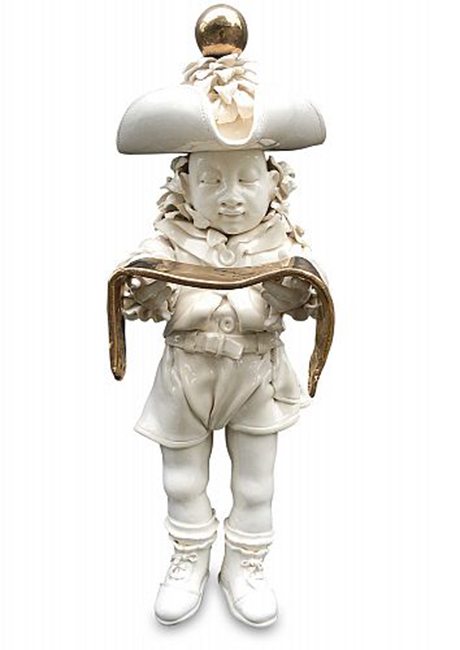 The thought provoking exhibition by Australian artist Mark Thompson (b1949 -) at the Robin Gibson Gallery in Darlinghurst at Sydney, who says on his website that he is trying ‘to make sense of my place in the world’, is one that can be described as both weird and wonderful.

Intriguingly I discovered when I went to visit and review the show while staying in Sydney, that Mark Thompson’s work is represented in all the other major Art Galleries of Australia, except NSW. This was completely beyond my comprehension, an oversight that surely needs to be corrected by a generous donor and admirer of his work.

His quite splendid “Hatted Lad” of earthenware and gold lustre seemed to be offering himself up as a sacrificial lamb, one willing to help us challenge our own perceptions, as he provokes both our intellectual and philosophical response as well as engage our senses.

Mark Thompson has been an outstanding artist in Australia for over five decades now, first exhibiting in Adelaide in 1971 and at the Robin Gibson Gallery in 1978, during its first incarnation at Paddington.

Thompson is an extraordinary multi-tasking creative talent. He has worked in the world of costume design for theatre and opera.

As well he is an exhibition designer and event consultant par excellence, while painting in different mediums and styles and working with porcelain and other ceramic bodies.

Renowned for his design work for Opera Australia productions, Thompson also became more widely admired when a finalist in the Archibald Prize 2009 with his painting of actor Greta Scacchi as Queen Elizabeth in Mary Stuart.

His splendid sculpture show will be on view at Robin Gibson Gallery until September 24. 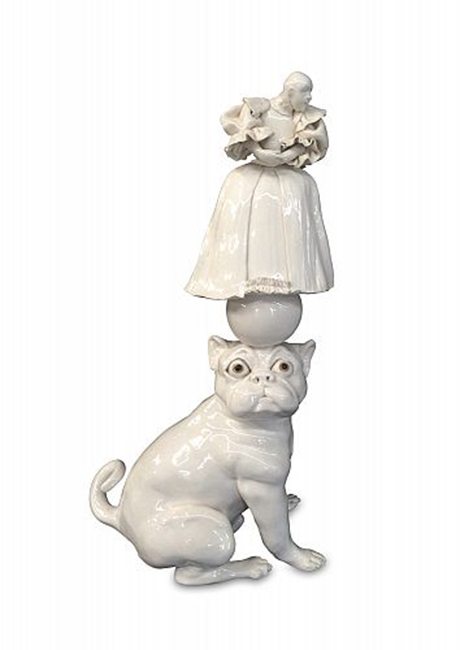 It reveals a wonderland of his own making, one that has fantasy and folly, fun and also fear embedded within its design philosophy.

He has created superb imagery from a ceramic commodity; porcelain is a substance that aided the growth of both the east and western world’s economies and benefited their social and cultural development for centuries.

It was a ceramic body once revered and coveted in society because of its beauteous qualities of translucence, and in his works Mark Thompson has given it new life.

While the works of the famed Meissen factory of Saxony’s great porcelain modeler Joachim Kandler (1706-1775) spring into to your mind, the image and mention of it by Thompson is but fleeting.

This certainly happened for me when encountering his diverse and often challenging characters.

They are devishly designed to intrigue, inspire and to be entirely thought provoking and I suspect, they are definitely meant to be notorious too.

For me while he is conveying a sense of fun, there are times he just borders on giving in to a darker and much more sinister side, and I could see this transition happening.

This can be disquieting, unsettling, as the artist is stirring our reactions. He wants to see just how far perhaps he can push us as we come face to face with re-examining and perhaps even justifying our own existence. 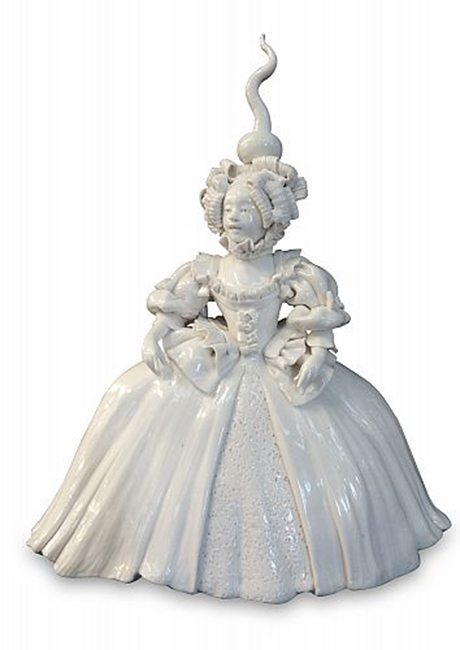 This is a promise of art; to reflect that which cannot be seen or heard, one I had also encountered a few days before on my exploration of the labyrinth opened in Sydney’s Centennial Park.

It’s a journey or a pathway we all have to go on if we wish to become greater givers in life and understand its many complexities.

This show as his colleague Stephen Bowers remarks in his very erudite appraisal published on the Robin Gibson Gallery website, is of intriguing ‘…pottery that purrs like a Cheshire cat’  although there isn’t one in sight, only Pug Ugly who is looking very surprised.

The exhibition is altogether quirky, a circus and carnival in one.

It is carefully calculated to captivate by coming complete with clowns, providing a direct link to the past via a reference to divine images of the Italian Commedia dell’Arte that Meissen produced in abundance.

For many people they were among the best works Kandler ever produced at Meissen.

Some by Thompson are in disguise, giving a vague overall impression that is not conducive to ease, perhaps even causing actual bodily discomfort while challenging sensory perceptions.

They all reveal both great skill and remarkable imagination, invention and innovation. The Commedia was a form of theatre characterized by masked “types” producing comedy through improvisation in Italy during the sixteen century,. The theme plugs into Thompson’s other great love, the theatre.

Paintings, photographs and porcelain are just some of the mediums Mark Thompson revels in.

He accepts the constant challenge of endeavouring to understand the thrusts and throw downs of daily life by capturing fabulous fragmentary moments and by delivering captivating imagery. For centuries the English and Europeans admired the seemingly magical translucent porcelain wares from Cathay that came into the markets of the world via The Silk Road.

They did their best to copy them in the tin glazed earthenware’s of their cultures.

Experimentation at Florence in Italy, Chantilly in France and Chelsea at London, produced soft paste objects of great beauty and desire.

However the invention of hard paste porcelain in the west at the Meissen manufactory in Saxony (South East Germany) during the first decade of the eighteenth century changed the economies of Europe forever.

Mark Thompson’s ‘What’s A Grecian Urn’ quite wonderfully and immediately reminded me of the poem ‘Ode on a Grecian Urn by one of my favourite English Romantic poets, the great John Keats (1795-1821 ).

He believed that ‘classical Greek art was idealistic and captured Greek virtues’.

The urn, created from ‘stone’ is made by an artist who is communicating through the work of art, not by words.

Stone is in many ways eternal as it only ages slowly, and so the urn is relating a story that goes beyond the time of its creation and into the realms beyond.

Thou still unravish’d bride of quietness,
Thou foster-child of silence and slow time,
Sylvan historian, who canst thus express
A flowery tale more sweetly than our rhyme:
What leaf-fring’d legend haunts about thy shape
Of deities or mortals, or of both,
In Tempe or the dales of Arcady?
What men or gods are these? What maidens loth?
What mad pursuit? What struggle to escape?
What pipes and timbrels? What wild ecstasy?

Of Meissen Men by Mark Thompson 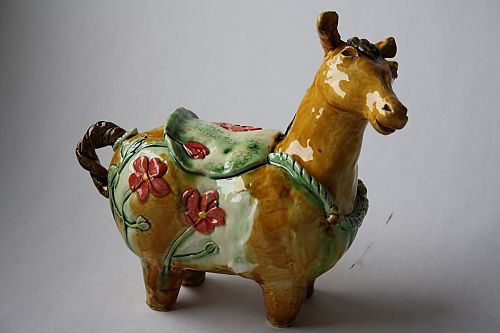