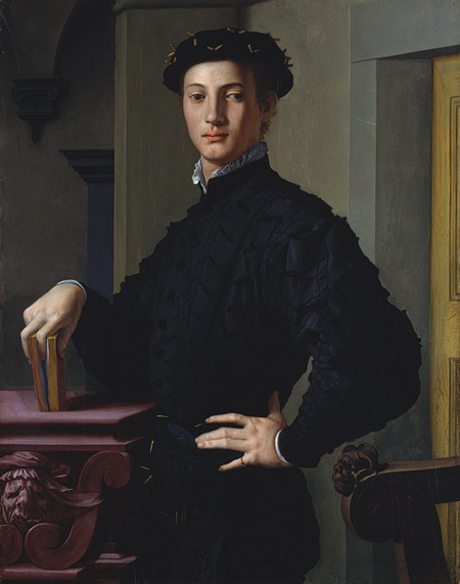 A Portrait of a Young Man dating from the 1530’s painted by Bronzino (Agnolo di Cosimo di Mariano) was a gift to the Metropolitan Museum of Art New York from a generous patron Mrs H.O. Havemeyer in 1929.

He is now found to be hanging in the heart of their stunning European Painting Galleries, the hallowed halls where its world-renowned collection of European Old Master paintings dating from the 13th to the early 19th century have been on display since 1880, when the galleries were first constructed.

This  is the place where the history of Italian painting is divided between the Renaissance, from Giotto and Duccio to Raphael and Titian, and the 17th and 18th centuries, from the Carracci and Caravaggio to Canaletto and Tiepolo.

Believed to have belonged to Bronzino’s close circle of literary friends, the subject has never been identified. The work considered one of the artists greatest portraits, was painted in the 1530’s.

The young man reflects the confidence and arrogance of youth; he has a haughty I am better than you demeanor and his lips are set in an almost abstract expression, his penetrating gaze revealing that he would definitely take no prisoners in the perilous game of life.

Sky lit, the galleries at The Met in NY were first refitted between 1951-1954 to accommodate the expanding collection at that time. It was reinstalled again in 1972 and in 1980, when there was also a renovation of nine of this suite of rooms most beautifully proportioned galleries, which were then designated for special exhibitions.

The recent upgrade this century (2013) means the collection has also been re-installed, an arrangement that has amazingly allowed for the display of 33% more works. Now they accommodate more than 700 paintings in 45 galleries, which includes a rotating exhibition space. Vermeer, the subject of a convincing new portrait of him by English author Anthony Bailey, remained obscure to most scholars for a very long time.

Connoisseurs in the city of Delft where he lived, and those in the neighbouring city of The Hague, knew his works well. He idealized the domestic world, providing us with appealing images of the domestic goddess.

One wore a pearl earring, another a pearl necklace while his Young Woman with a Water Pitcher’s pearls were casually placed, spilling out of her jewellery box onto the carpet-covered table.

The linen draped over her head and around her neck was usually worn during the morning toilette.

She is an ideal lady in an ideal house, one in which cleanliness is definitely next to godliness. It is also the place where beauty, luxury and serenity all co-exist.

The European Galleries have been organized both chronologically and geographically to provide an overview of painting in Italy, France, Spain, the Netherlands, Belgium, Germany, and Great Britain. The gallery dedicated to landscape painting in Rome, where the outstanding figure was not an Italian but the French painter Claude Lorrain, leads into French painting of the 17th and 18th centuries, with one gallery given over to cabinet painting and another to the Metropolitan’s outstanding collection of Neoclassical painting – the finest outside France.

Neoclassicism was the culture of an age when educated and enlightened men and women deliberately set out to rediscover classical art and architecture. Why certain countries at certain times should be centres of genius and influence remains a mystery.

It is undeniable that the quality of French painting from the Revolution until 1930 is far superior to the work done elsewhere, through a series of masters like Jacques Louis David whose painting of Antoine Laurent Lavoisier and his wife is a work of immense power

On his trip to Paris Thomas Jefferson met Charles Lavoisier and he became a friend and fellow member of the American Philosophical Society.

He was one of the founders of modern chemistry and his beautiful wife, Anne Piettette actively collaborated with him for all his revolutionary experiments.

He became one of Jefferson’s ‘martyrs’ of liberty. Lavoisier was among the last victims of the guillotine and just as sharply as it cut off the heads of many of his famous patrons, Jacques Louis David managed to survive the turmoil, which severed the tradition of portrait painting in Europe.

The installation captures historical crosscurrents between countries and contacts as well as between artists by placing their works in adjoining rooms.

This results in presenting the Museum’s collection in a more coherent and natural progression than ever before, helping the viewer to understand how the past can inform the present. The subject of Venus and Cupid was enormously popular at Venice and no other painting from the Renaissance period in Italy’s history develops the theme with the rich allusiveness this one achieves, making it of singular importance in our understanding works from that time.

Venus and her son Cupid are depicted in a bower, a subject inspired by ancient marriage poems known as ;epithalamia’, meaning they were composed to celebrate a marraige.

It is the work of Lorenzo Lotto, whose unusual genius makes him one of the most fascinating of all Venetian painters.

The painting was probably completed by the mid-1520s for a cultivated couple in either Bergamo or Venice and Venus’s features may be taken for that of the bride’s. Only acquired by the museum in 1986, it has since inspired countless essays on the subject and its symbolism.

Lotto was fascinated with emblematic devices. The shell above Venus’s head and the rose petals on her lap are her attributes, while the ivy is symbolic of fidelity the myrtle wreath was most likely worn by the bride.

They relate both to the goddess and to marriage and Cupid’s action confers a mood of light-hearted wit and refers to the goddess’s fertility.

Sculpture, medals, ceramics, and other decorative arts are mpw judiciously incorporated into the new scheme, especially where their presence adds a layer of meaning to the display of paintings. If you are planning a trip to New York spending time with the collection of old master paintings in the European Painting Galleries at The Metropolitan Museum of Art in New York will be a rewarding experience.

Shifting Gear: Design, Innovation and the Australian Car at NGV Australia in Fed Square, Melbourne, will soon host an array of cars designed by creative Aussies