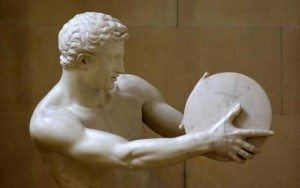 From 776 years before and 395 years after the Christ event citizens from all over the classical world flocked every four years to Olympia. They came from as far away as Spain and Africa; long distances to travel mostly on foot. They not only endured many discomforts but also enjoyed the public banquet for victors and various private celebrations held in the evenings. The wine flowed and there were songs and revelry. Victors and friends decked themselves in floral garlands and sang victory hymns, written for the occasion.

And the whole company raised a great cheer, while the lovely light of the fair faced moon lit up the evening….

Not until modern times did archaeological discoveries reveal the many civilisations that existed in the Aegean world. Why did people travel so far and endure so much to witness the Olympic games? What was the importance of the site at Olympia?...to be continued

Hollywood does not always get the emotional tone right but in Alita: Battle Angel, Robert Rodriguez did not get it wrong, either says Derek Parker in his review