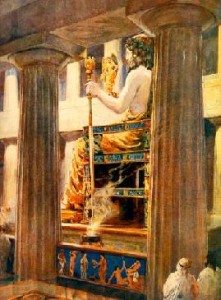 At the very heart of the Olympic games was the central reason for its existence; to honour Zeus the most powerful of the Olympian Gods and the supreme God in Greek mythology. A visit to Olympia was a pilgrimage to his most sacred place, the grove known as the Altis, in which was a grouping of temples and arenas. The temple of Zeus took ten years to build. It was completed in 456 BCE based on the Doric order in Greek architecture with regard to its exterior and designed by an architect named Libon. It must have been a remarkable sight with thirty-four massive columns surmounted by mouldings painted with intricate patterns in glowing colours of red blue and gold. Over one hundred marble water spouts in the form of lions’ heads drained water from the roof that was tiled entirely of Pentelic marble brought from quarries near Athens.