When the time came Britain we did it right* The giant bell was back to herald the beginning of the end to the 2012 Olympic Games at London. It was yet another of Britain’s finest hours and a WOW ending to surely the greatest show on earth that combined arts, society and culture. Ablaze with colour the stadium became a giant union jack flag, which was in turn joined by all the other flags carried by chosen athletes from the countries they had represented. Following those came the 10,000 athletes who had taken part, while the memorable achievements they had notched up were reflected in hundreds of white boxes. The imagery honoured their participation and noble quest for achieving excellence in their chosen field of sport.

The world knows now how to party in grand style, via a giant stadium filled with celebrities in the world of sport, music and tonight, for the first time, fashion. Iconic musicians performing iconic songs, with dancers and volunteers combining to celebrate all that’s good about being an Olympian was entirely engagin. There was a giant Olympic stadium sing-a-long in true British style, as this symphony of sport, song and a celebration of life came to a happy close. The Olympic Games is all about enjoying democratic freedoms and the liberty western civilization offers its citizens. Founder of the modern Olympic games, often described as the most famous ‘unknown’ person in history French educationalist and historian Pierre de Coubertin (1863-1937) was a great and passionate visionary. When he started along the path of establishing the modern Olympiad at the end of the nineteenth century how would he have ever imagined that a force playing sport on a grand scale would see it become the incredibly successful social phenomena it is today. Founded on the basis of respect for individual life, of tolerance, and the recognition of equal rights for all cultures, the Olympic games are all about humanism. The past 17 days at London have been filled with heartache and hope, tears and joy, magnificent performances, record-breaking events and athletes across all disciplines of sport competing to the very best of their ability. Many have won and many have lost. All those involved however have shown humility and grace in both victory and defeat, which is an attribute required of all great Olympians.

The three men who achieved success in the final event The Marathon, that is all about revealing the endurance and persistence of ‘man, were presented on stage with their medals at the closing ceremony. This is now an important part of the Olympic tradition. Respect for both tradition and keeping abreast of changing times is the responsibility of the International Olympic Committee who have done their job well, working at all times in splendid communication with the country where the games are being held. The head of the London organizing team, Sebastian Coe acknowledged both their assistance, and that of the participation of tens of thousands of volunteers, to thunderous applause. Past, present and future combined brilliantly at the 2012 London Olympic Games as they delivered a spectacular closing show described by some as ‘wierd and wonderful’. It will live in memory as a brilliant evocation of, and showcase for making cultural connections and communicating on a global scale.

These games at London started with a creative reminder that the machine aesthetic of the nineteenth century and the advancement of technology in the 20th century had improved communications and enhanced the dream of a classless society, one that was inspired by new ideas about being ‘modern’. Modernism, in its many forms was the defining international design concept of the period, at least until the 21st century.

Starting with the landmark games at Sydney in Australia in 2000, which were described as the ‘greatest Olympic Games ever’, and on through the conduit of modern Athens to the brilliance of Beijing and now these games in 2012 at London, the advancement of our cultural and social connections surely has exceeded everyone’s expectations. It was during the twentieth century that Nobel Peace Prize winning physicist Albert Einstein reminded us all that  ‘imagination is more important than knowledge, for knowledge is limited to all we now know and understand, while imagination embraces the entire world, and all there ever will be to know and understand’.

It also helps us convert creative ideas into action.

Imagination and creativity rules and while we should always respect traditional use, and those seeking to safeguard traditions, there are also times in history where we need to take the initiative to ensure that art and design continues to reflect the symbolism of contemporary times and contemporary issues.

Light is that intangible phenomenon by which our world was first made visible and over the centuries it has become symbolic of goodness, revelation and beauty.

The volunteers tonight ‘lit up’ the stadium with both their presence and the lights they all carried on their London ‘bowler’ hats. They were a reminder of just how vitally important volunteers have become for the staging of the modern Olympic Games. Russell Brand singing Pure Imagination from Roald Dah’s Charlie and the Chocolate Factory and I Am Walrus from the Beatles and, all on the top of a illuminating psychedelic bus brought huge cheers.

The idea behind Olympism is that when facing the unknown and the misunderstandings that might occur it is important for all those involved to show and reveal to those not involved; that the games cannot be simply reduced to a single four-yearly celebration.

Their ideals and the message of hope that they project must become a way of life for all involved, one that responds to the needs and demands of global society.

Attitudes and philosophies, fashions and passions are at the very core of human identity, which is reflected in what we wear. All the sporting greats who arrive at each venue of the games to compete are wearing unique costumes that reflect both their cultural backgrounds and social aspirations.

For the first time at these Olympics super models took centre stage, highlighting the fact that costume is all about who we are, where we have been and where we are going.

Today costume is a footnote to culture, and it remains both a changing and eternal form of human expression.

It wasn’t a case of just going in One Direction, although the popular youthful band were on hand for this great British bash.

The re-digitalized image of perhaps Britain’s most loved songwriter of the twentieth century John Lennon, loomed large in the stadium, giving the world a first glimpse of him singing all the way through his iconic hit song Imagine.

How sensitively handled it was.

His single image was a tribute to how the Olympics has brought the world together to be a positive force for the future. It was indeed a special and emotional moment, and there was a respectful silence as they listened to him perform the legendary song. The performance of the Spice Girls, re-united and in fine form proved that differences can be settled so that everyone can become involved in ‘spicing up’ life. Watching the spectacle of that outlandish Cockney former member of the Monty Python troupe Eric Idle failing to be fired out of a cannon was cleverly staged, as he emerged from underneath it, getting up to look around as always ‘on the bright side of life’.

It was a fitting swansong as he led the great sing along with the iconic song from ‘Monty Python’s Life of Brian’.

He was despite age and experience still having to adjust to new forces in the world, in his case Bollywood. The scene with him trying to keep up with the Bollywood dancers was charming and again, entirely engaging.

This was all about Britain forging a whole new relationship with their Indian neighbours as fortunately, and finally ideas of Empire fade. Thankfully now it has become a case of ‘all for one and one for all’. If you think on this ideal it is a perfect homage to the legacy of the modern Olympics French founder.

Importantly we are once again all re-learning about the importance of giving back to the society that nourishes us and honouring the cultures we are born into, and are an integral aspect of. 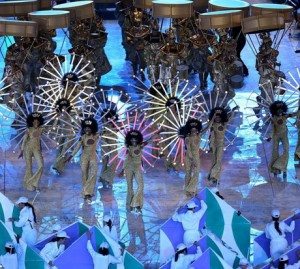 It’s not a case of either or, but both and.

Together we are striving to ensure that the qualities, which will make life fairer and happier for everyone, are honed and constantly re-visited so that we can get it right and secure the future of our children and their children’s children.

It’s about surmounting all the challenges ahead that we collectively face by solving them together. We can create the world we want and bridge the gap with the one that actually exists through our combined actions.

The handing over ceremony of the Olympic Flag to Brazil with the London Philharmonic performing their national anthem was highlighted by a dancing and singing troupe from Rio that left us in now doubt that 2016 will be a huge carnivale. In the end it was Gary Barlow leading the great boy band Take That who kick-started the grand finale. What a great year he has had writing the Commonwealth Song, producing the Queen’s Concert on The Mall and numerous other tasks that have helped to highlight British qualities like honour, persistence, integrity and endurance.

They were riding on a star to ‘rule the world’ and were followed by beauty in the shape of the ballet dancers of the Royal Ballet, who performed to an especially choreographed work about the ‘Spirit of the Flame’.

Then the great petals of the flowering flame that has stood for seventeen days in the stadium were extinguished as momentarily a quick volley of fireworks lit up the night sky, and silence reigned.

To keep the spirits of the athletes intact and to help them kick off the celebrations, that will no doubt be held all over London, The Who livened up the closing atmosphere with some of their hits, including ‘Who Are You’. For me this was a poignant reminder to the youth of today to learn about and understand the concept of ‘know thyself’, which was inscribed upon the temple of Apollo at Delphi in ancient Greece.

Now we will all look forward to Rio de Janeiro, Brazil where, in 2016 the athletes will gather for the Olympic Games once again. It will be yet another ‘sacred demonstration of the union of humans on this planet and their specific character’. The Olympic committee wants, that in the twenty-first century Olympism and its aims will be in concordance with everyday life.

18th Biennale of Sydney from June to September 2012 will take place in various city venues, connected by a spectacular art walk around Sydney’s famous harbour