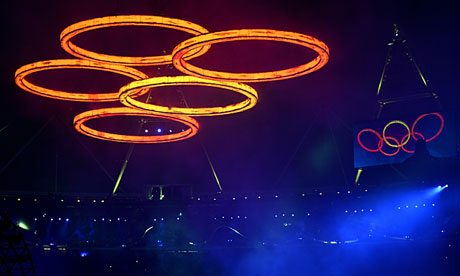 The iconic movie Chariots of Fire about two British track athletes, one a determined Jewish man running to overcome prejudice, the other a devout Christian running for the glory of God, caught everyone by surprise in 1981 and caused enormous excitement all around the world. It was about two athletes competing to gain a place and win at the 1924 Olympic Games at London, the last time they were staged in that august city. Ben Cross as the intense driven Harold Abrahams and Ian Charleson as the powerhouse Scot and missionary Eric Liddell lit up the screen and stirred our imagination about the importance of the enlightening message at the heart of the modern Olympic Games. They helped to add to its now achieved celebrity status. At London in 2012,  following a powerhouse presentation at the Opening Ceremony on July 27 in which the theme music of the movie featured, the games are now well and truly underway. 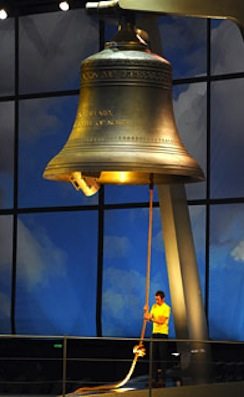 The official opening ceremony began with 2012 La Tour de France winner Bradley Wiggins ringing the largest harmonically tuned bell in Europe, produced by the famous Whitechapel Foundry, which has for over five hundred years produced some of the most famous bells in history, including the biggest bell ever cast, Big Ben. It was only but a forestate of things to come in a ceremony that would allow everyone participating and watching to suspend reality as English greens became industrial towns that finally, after masterful visual storytelling, gave way to the contemporary age and the world of texting.

Innovative, inventive and unpredictable is what renowned artistic director Danny Boyle promised, and what he and his team delivered. The presentation ‘Our Isles of Wonder’ included a lush recreation of the English countryside as it existed prior to the ravages caused by the  industrial revolution. It saluted and celebrated the challenges and rewards of living life in that ‘green and pleasant land’ from that day to this as the stadium was transformed into a microcosm of Britain, with all its landmarks and symbols that those, who have walked upon England’s mountains green, would not fail to recognise as being their hearth and home.

“Be not afraid” was the message sure to become a symbolic quote ringing true for all olympians, as connected together the 204 nations involved face days of strenuous and inspiring competition. The might oak tree set upon the top of a green hill in a pleasant land symbolised the strength of the nation, who are the hosts for this the games of the XXX Olympiad.  The country became the city, the villages the towns as the prosperity of a nation was built upon a hill or heartache. The green gave way to progress as giant foundries drove the industrial revolution forward and embedded England’s greatness on the world stage as a leading economy of the western world. The giant workshops of the world forged the mighty Olympic rings in this amazing presentation, which in time would also come to represent for many, a Paradise Lost. There were many wonderful highlights. However it was Mr Bean when he joined the London Symphonic Orchestra and its renowned conductor Simon Rattle on stage who not only provided a wonderfully light moment of humour as he hogged the limelight but also stole the show. He took the focus away from James Bond and the Queen, who featuring in her first acting role, proved once and for all what a great sport she during this her Diamond Jubilee year. The sight of David Beckham on a speedboat coming up the Thames with the Olympic torch thrilled millions. England does have an advantage in welling up the emotions of the British and for all those who descended from her shores as there are millions of us around the world. Family roots go back to ancient times, when enormous groups of people from many different cultures and all backgrounds coveted, conquered and roamed this wondrous isle. Composer, teacher and historian of music Hubert Parry (1848-1918) set a preface poem written by that glorious luminary William Blake (1757-1827), England’s much lauded romantic visionery, poet, painter and print maker to music, creating the now iconic and legendary anthem, Jerusalem.

During Blake’s lifetime the culture of the ‘dark satanic mills’ that had in many ways brought prosperity to the land, were in fact also destroying it. He saw the mills and collieries as a means of enslaving millions, although the concepts underpinning his famous work had wider connotations. It foretold the fall of the isle of Albion (the ancient name for England), which became the embodiment of man and a symbol for the western world as a whole. He saw it as having reached and gone past its peak of perfection during the age of enlightenment. If it wanted to survive his warning was that it would have to be re-born, much like the modern Olympic Game movement itself, which has helped to re-kindled the twentieth century perception of justice and liberty as well as the ideas attached to democratic freedoms at the heart and essence of the western world. All these have impacted and resounded dramatically around the whole world over the past 100 years. All Olympic Torches are lit in the ruins of Olympia at Athens, home to the ancient Olympic Garmes

All Olympic Games opening ceremonies are required to have certain elements in their presentation, which are outlined in the International Olympic Committee (IOC) charter. They are: Receiving the Head of State, the Parade of Athletes, Official Speeches, Olympic Anthem and Flag, Oaths of the Athletes, The Torch and Cauldron. More than 200 national anthems have been recorded to play at all the official ceremonies, with the London Philharmonic Orchestra (LPO) recording them with a specially chosen 36-piece orchestra at the world-famous Abbey Road Studios in a marathon session that took 60-plus hours. Following the official aspects the artistic performance welcomed the world to the London 2012 Games. Executive Producers Stephen Daldry CBE, Mark Fisher, Hamish Hamilton, Catherine Ugwu will all be rewarded no doubt by a trip to the palace.

However it is my bet that nothing would have rewarded them, and the incredible teams of creative people who masterminded, guided and produced this splendid show, as much as seeing their ideas come to fruition in a grand entertainment that pleased the crowd, as well as all those watching around the world. 15,000 people took part and were watched by an estimated audience of four billion people.

At London the athletes and their achievements now take centre stage at all the celebrations following this opening. What does it mean to be quintessentially English? Is their one intrinsic quality that can be traced in all forms of its many and varied cultures, as well as in its literature, painting, music, architecture, philosophy and science? Its history is certainly steeped in tradition, magic and mystery as it metmorphed from the ancient times when it was Albion, that wondrous isle whose chalk white cliffs greeted travellers suggesting that this white land had a purity or willingness to be a canvas waiting to be written upon. From Beowulf to King Arthur and the dashing knights of the Round Table via the father of English literature Geoffrey Chaucer, who is widely considered England’s greatest poet of the middle ages, to the bard himself Will Shakespeare, whomever he may have been, England’s stories have travelled forward in time.

They have come down to us through the world of Jane Austen, the Bronte sisters and Alice in Wonderland’s creator C.S. Lewis and the famous trilogy of writer, poet and author of high fantasy works, John Ronald Reuel Tolkien. Like the Olympic rings the English imagination is endless, because it has no beginning and no end. It is able to reflect and learn from its mistakes, as well as project what is and what it is trying to be. Its essence is captured in the fragility of exquisite eighteenth century porcelain and the fine design and craftsmanship of furniture by Thomas Chippendale.  From medieval great halls to modern music halls, from plays by Scottish born J.M. Barrie to J.K. Rowling and Harry Potter and inspiring paintings by William Mallord Turner,  the joyous music of Henry Purcell and Vaughan Williams, England is highly original and magnificent in its scope. Its mighty oak trees are not only a symbol of its strength in times of adversity, but also of its ability to adapt to change. Yet it is still more; it is about the people, the space, the experience and having no boundaries. Despite one American Olympian team refusing to acknowledge the King of England by dipping their flag, controversially the Whitechapel foundry also cast America’s original Liberty Bell. It was broken down and re-cast by two “ingenious” workmen, Pass and Stow of Philadelphia, who modified the alloy by adding 1½ oz. of copper to every 1 lb. They did not appreciate that bell metal relied on this to a great extent for its freedom of tone. They made a new casting which was not successful and, in their second recasting, having learned the lesson, restored the correct balance of metal.

This bell now hangs in the Liberty Bell Center, directly across from an earlier home, Independence Hall. Whitechapel Foundry’s connection with the Liberty Bell was re-established in 1976, the year of the US Bicentennial. After a great kerfuffle, it was commissioned to cast the 12,446lb Bicentennial Bell, which now resides with its illustrious predecessor and bears the inscription: For the people of the United States of America from the people of Britain, 4th July 1976. Let Freedom Ring. He that honors me, I will honor*

The announcement that for the 1st time in history women are included as participants in every nation competing in the spirit of friendship, respect and fair play brought a huge roar from the crowd as 7 billion pieces of paper flowed down from the sky representing all the people on earth.

The flame was lit in a spectacular display and the London Olympics 2012 were declared open. The opening ceremony celebrating the isles of wonder and that green and pleasant land had been ‘absolutely fabulous’.

Blake’s poem
And did those feet in ancient time.
Walk upon Englands mountains green:
And was the holy Lamb of God,
On England’s pleasant pastures seen!

And did the Countenance Divine,
Shine forth upon our clouded hills?
And was Jerusalem builded here,
Among these dark Satanic Mills?

I will not cease from Mental Fight,
Nor shall my Sword sleep in my hand:
Till we have built Jerusalem,
In England’s green & pleasant Land

Beneath the poem Blake inscribed an excerpt from the Bible: “Would to God that all the Lord’s people were Prophets” Numbers XI.Ch 29.v.[6] (Book of Numbers 11:29).[7]