As part of the philosophy of the Olympic Games its goal “… is to place sport at the service of the harmonious development of humankind, with a view to promoting a peaceful society concerned with the preservation of human dignity,”

This spirit was evident and expressed loudly when the crowd roared as they gathered in the first South American city Rio de Janeiro in Brazil to host the Olympic Games, welcoming for the first time as part of the 10,000+ strong athlete parade, The Refugee Team. This small group of athletes were not only making history as they entered the stadium, but also taking a chance as they proved to all the other refugees around the world that not only should they should be afforded by all other nation’s and people’s dignity and respect but also there is unity in cultural diversity.

Recognised as equals and celebrating the values at the essence of sport, here were sportsmen and women displaced from their homelands in Syria, South Sudan, Ethiopia, and the Democratic Republic of the Congo (DRC), who were coming together to celebrate a love of life by being the best they can be in the face of enormous difficulties. At the ‘Olympic games it is not the finest and strongest men who are crowned, but those who enter the lists, for out of these the prize-men are selected; so too in life, of the honourable and the good, it is they who act who rightly win the prizes’. *

Representing all cultures on earth every colour of the rainbow was employed when an amazing carnival atmosphere prevailed as the people of Rio de Janeiro welcomed all and helped empower the youth of the world, inspiring their spirit by offering a spectacular opening ceremony despite their own many difficulties. There are 306 medals on offer and all athletes will be striving to produce a personal best performance. Four distinct venue clusters will host some 42 disciplines across 28 sports, including the highly anticipated debut of the rugby sevens and golf competitions. Of the 306 events 161 are for men, 136 are for women and 9 are mixed.

Every athlete was given a native seed to plant, contributing to the Athlete’s Forest that will be Rio’s legacy, planted in honour of all those who competed.

In welcoming the world Brazil’s indigenous peoples were honoured, as well as the cultures of Europe, Japan and the African nations that have contributed to their multi-culturalism and proclaiming their own unity in diversity together. The Olympic Games Flame that had travelled from Greece was raised high by 2004 men’s marathon bronze medallist Vanderlei de Lima, before he lit the cauldron that announced to the world the Olympic Games 2016 were open.

“In the name of all the competitors, I promise that we shall take part in these Olympic Games, respecting and abiding by the rules which govern them, committing ourselves to a sport without doping and without drugs, in the true spirit of sportsmanship, for the glory of sport and the honour of our teams.” The dove of peace flew high as the oath on behalf of the athletes was taken by two-time gold medallist Brazilian sailor Robert Scheidt.

Five centuries before the Christ event leisure became an important activity in ancient Athens where the population rose from 30,000 to 40,000 with the Olympic games and other important festivals well established. Gold was prized for its intrinsic worth and because it was redolent of many virtues – mythical, religious and symbolic, it is appropriate that today the gold medal awarded at the modern Olympic games is the goal for all athletes. 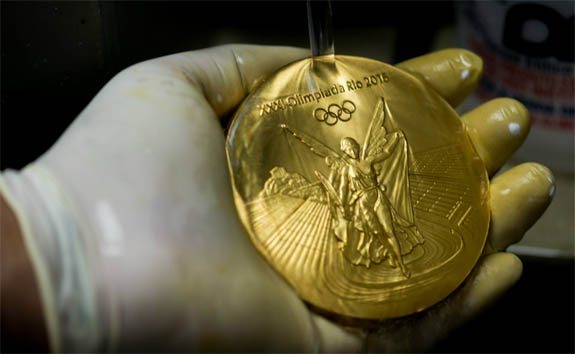 In many ancient cultures gold symbolised the Sun and was an attribute of truth personified because it revealed all by its light, which amazingly resisted rust and decay. It was like magic.

It is appropriate then that we can look to the past to again invent the future of the games when the Laurel was a small evergreen tree with glossy aromatic leaves.

It grew throughout southern Europe and was sacred to Apollo, the Sun God and its young branches woven into garlands were placed on the heads of Olympic winner and poems of praise, were sung about them in public places. “In this Olympic world, we see that the values of our shared humanity are stronger than the forces which want to divide us” said the President of the Olympic Committee Thomas Bach, who gave an impassioned speech before presenting an all new prestigious prize to Kenyan distance runner Kipchoge Keino.

In recognition of his outstanding achievements in education, culture and peace through sport Keino received The Laurel, a new distinction award presented at the Rio Olympic Games for the first time, one athlete’s around the world can also now aspire to achieve. Colour, culture and music were a perfect mix for the party styled opening ceremony at Rio de Janeiro, which drew to a close with the sight of the giant statue of Christ the Redeemer, the man many consider the light of the world on the hillside, overlooking a spectacular scene below, one that was very moving.

There is no doubt in my mind that he would echo Thomas Bach’s words “While we must remember that our common humanity unites us all as individuals, we must also now more than ever, value and accept difference”. It is a message everyone should hear and act upon.