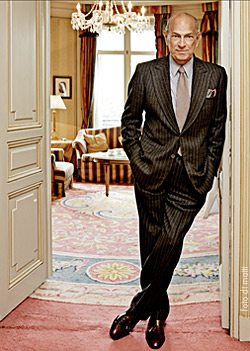 Here was a man of true style and class, a man whose designs made women look and feel feminine.

Just ask Sarah Jessica Parker. She was the hit of The Metropolitan Museum of Art Ball Gala in May this year in New York, wearing a stunning black and white creation, autographed by the man himself.

Or how about the new Mrs Clooney, Amal Alamuddin walking down the aisle in her bespoke de la Renta bridal gown.

It wasn’t just her new husband women were coveting!

Not to mention the countless other female celebrities that had the pleasure of being dressed by him.

Being the eldest of seven children, and the only boy may have had something to do with his understanding of the female form.

And he was genius at it. Oscar was born on July 22nd 1932 in Santo Domingo in the Dominican Republic.

Showing an affinity for art from a young age, he went to study painting at the Academy of San Fernando located in Spains’ capital, Madrid.

It was through his drawings that he was discovered by Francesca Lodge, the wife of John Lodge, US Ambassador to Spain.

She was so impressed she invited him to design a gown for her debutant daughter.

This was featured on the cover of Life magazine and as they say, the rest is history!

It is from these beginnings that he went to work with Spains’ most famous couturier Cristobal Balenciaga in Madrid.

Feeling the urge to grow further, in 1961 he travelled to Paris, France to assist Antonio del Castillo, who had joined forces with the house of Lanvin.

I would hazard a guess that it was under the tutelage of both these houses, he gained his refined silhouette, however it would be his background in the world of fine art that would set him apart.

And all this shows in his creations.

You can also see he loved women’s bodies. As actress Jennifer Garner, who wore one of his pieces to 2014 Academy awards said after hearing of his passing “Mr de la Renta loved women. And you saw it in every design that he did. He honoured women’s features, he honoured our bodies. He wasn’t afraid to pull back and let the woman be the star of the look.”

She was a star glittering brightly in his stunning silver fringed frock.

By 1963, he could see the way of the future in fashion was ready to wear.

On asking ultimate style doyenne Diana Vreeland’s advice, she steered him in the direction of Elizabeth Arden. She was not a designer herself and under her banner he could shine and develop his own unique style, which he did for two years.

In 1965 he joined Jane Derby, and after her retirement that same year, he opened his own label.

He also had a ten year stint at Balmain.

His own label encapsulated his extravagantly detailed, bold yet highly tasteful style and over the years he added homewares, accessories and fragrance to his line.

Even his spring 2015 collection this year, which would be his last, showed a love of texture and blooming colour.

Divine shades of peachy pink, citrus green and sky blue hit the runway, as did crisp white and black ensembles.

He celebrated the hourglass figure and showed strength through femininity.

This was made to feel incredibly modern by asymmetrical hemlines and laser cut detailing. No easy feat, but he nailed it.

We can’t overlook his Bridal collections. Gossamer tulles, sumptuous satins and silks, and the finest lace made up this coveted trousseau.

Truly a princess bride moment if ever there was one.

It is obvious now that Mr. de la Renta must have been quite unwell at this show, but as a consummate professional, never buckled.

He stepped onto the runway, a glamazon on each arm and greeted his audience with a suave smile. These included his Council of Fashion Designers of America (CFDA) lifetime achievement award in 1990 and the Legion d’honneur as a Commandeur, which was bestowed upon him by the French government.

So this week we say farewell to a true gentleman of couture.