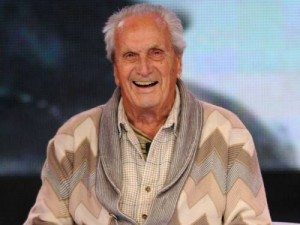 Last week, on May 9th Ottavio Missoni, co-founder of the instantly recognisable Italian fashion label, Missoni, passed away. He was 92 years of age.

Since 1953 Missoni has been a major player in the fashion world, first with it’s knitwear, then in later branching into perfume, home wares and even hotels.

Ottavio was born February 11th 1921 in Dubrovnik, Croatia, then a part of Italy.

A great lover of sport, he participated in the 1948 London Olympic games, competing in the 400 metre hurdles. He had already started a company that produced tracksuits, and these were quickly adopted by the Italian team. 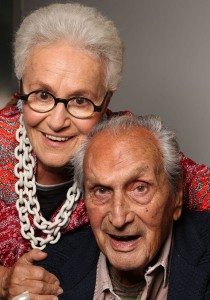 Whilst in London for the games, he met the woman that would become his wife and business partner for 60 years, Rosita Jelmini. She was from a family of shawl and embroidered fabric producers.

They married in 1953, and in the same year founded their label “Missoni”. The two started producing knitwear in the town of Gallarate, near fashion city mecca, Milan, Italy.

With just a few knitting machines, they began producing signature prints made from wool, cotton, rayon and silk. The patterns, always creative with a unique style soon became popular and they started selling to other fashion houses.

Deciding to create their own designs, they showed their first collection in Milan,1966, which was both a hit, and an outrage. You see, Rosita had the models remove their bras before the runway show, as the colours clashed underneath the sheer patterned pieces.

As soon as the lights hit the garments, they were totally see through, quell horror!! The house created costumes for the famed La Scala, opera house of Milan too.

Missoni did much to transform the perceptions of knitwear in the world of couture.

Producing not just jumpers, but dresses, coats, suits and jackets, they made designers rethink the medium.

What makes Missoni so special is the placement of colour within the pattern, always complimentary, always interesting.

I love their home wares and soft furnishings, in particular the bath towels. These add a fabulous accent to any room.

In 1998, Rosita handed over the reigns to daughter Angela, as she no longer had a passion for fashion. Along with the addition of Ottavio and Rosita’s granddaughter, Margherita (Angela’s daughter), they reinvigorated the brand, adding perfume, home wares and furnishings into the fold.

Margherita, a model, brought youth to the house starring in ad campaigns for its signature scent.

Now pregnant with her first child, I’m sure we will see this well established family business flourish for generations to come.

Ottavio would be proud.

Long live the house of Missoni!