Emerging artist Dylan Cooper was very excited about the opening of his first exhibition on Sunday 20th July at The Incinerator Art Space in Willoughby, Sydney.

Growing up on the northern coastline of New South Wales Dylan developed a passion and fascination for different rock formations.

After returning from overseas his eyes have rediscovered the unique qualities of the Australian landscape.

It inspired him to respond on canvas, board and paper to create striking artworks that represent ‘an abstraction of our land through his eyes’.

His artistic processes have involved detailed sketches and photographs of unusual rock formations that have evoked emotional responses.

These sketches and photographs are his references back at the studio.

The artworks trace his journeys, insights and perceptions through his travels from National Parks in Queensland all the way to Tasmania.

His interpretation of the landscape specifically the rock formations is influenced by some of the principals of abstract geometric art. In ‘Shoal Bay’ Dylan Cooperr captures the textural and tonal qualities of the rock formations with an astute eye for form, structure and placement. He uses acrylic, aerosol and charcoal on canvas to convey layers of time that gives depth and solidarity to the artwork.

I love the very strong use of diagonals in the composition.

They create balance and unity.

The painting evokes the ideas of fossils etched beneath the layers, drips of time and hidden caves.

Together they create mystery and invite the viewer to linger and contemplate.

While painting ‘Shoal Bay” Dylan’s daughter Violet was born and this influenced him to use a violet palette.

The violet tones add softness and a vulnerability to the rocks.

The tactile nature of the work is reflected in the way the artist has subtly maneuvered the markings of a turtle head onto the surface of the rocks.

In ‘Riversdale Rock Study’ Dylan has experimented with charcoal and conte on paper to demonstrate his affinity to the land.

His empathy to the layers of time and his understanding of the rhythmical positioning of rocks. The colours almost give the rocks a life of their own. 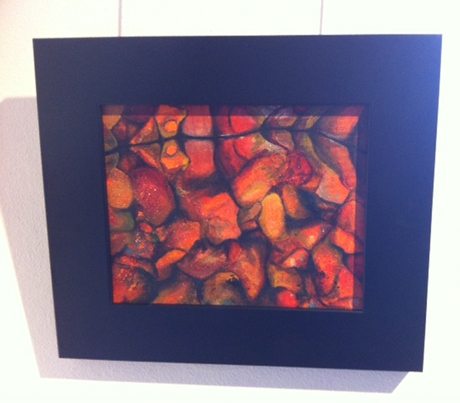 His interpretations of the still lake, water level and rock formations have been skillfully executed.

Dylan Cooper has produced artworks that have an earthy resonance and respect.

Dylan said it is a “theatrical dance when I paint”.

His compositions reflect an inner strength, an eye for detail and openness to learning and discovery.