Set in the glorious Scottish highlands where the rugged hills contrasts dramatically with the purple of the heather in bloom, the smash hit STARZ television series Outlander, from the books by Diana Gabaldon, has acquired fans all around the world. She said ‘what do you call books nobody can really describe, but fortunately most people like?

Drama, period romance, Celtic folklore and with a dash of science fiction, Outlander is historically accurate. The series began with considerable charm and gradually built both the excitement and the tension as the story unravelled,

The performances by a superb cast in Outlander Series 1 was outstanding, beautifully rendered, sensitive and powerfully dramatic.

The story began with twentieth century World War II combat nurse Claire (Caitriona Balfe), who now the war is behind her, has married the man of her heart and believes she’s the happiest she will ever be. He’s the sensitive former British Intelligence Officer Frank Beauchamp (Tobias Menzies). Happily Claire and Frank go off to Scotland on their honeymoon. There while visiting the stone circle of Craigh na Dun near Inverness, she stumbles, falls and finds herself standing up again in a strange location.

Trapped and attacked by a radical in a redcoat she is startled to find that the officer Black Jack Randall is the very image of Frank and somehow she seems to now be in the middle of a local military skirmish in the eighteenth century.

Lucky for Claire during that first attack by Black Jack a group of Highlanders come to her rescue.

She meets Scottish heartthrob warrior James Fraser (Sam Heughan) who has recently been nearly thrashed to near death by Black Jack and her whole life changes.

Carefully she employs a modicum of hygiene and uses her skills to help her rescuers, becoming well worthy of clan protection.

She also offers the band of warriors a psychological understanding of wartime injuries and they are amazed at her ability to heal. More monster than man, Black Jack she discovers, would not hesitate to violate and rape either women or men to suit his agenda.

As she gives up the idea that she can somehow return to the future and Frank, Claire accepts she now will have to make her way and have a new life with Jamie Fraser, the new age man everywoman really wants. He becomes her husband.

Black Jack provided many confronting moments for viewers in series one and they could not help but realise just how far mankind have come along the road to being truly civilised. You could say he became as ‘black as the Earl of Hell’s waistcoat’

On the other hand Jamie and Claire Fraser became one of TV’s favourite romantic couples and their fans are agonizingly waiting for Series 2 of Outlander to premiere on Australian television on April 9, 2016.

Jamie and Claire in the finale of Series 1 sailed off to France, providing wonderful opportunities for fabulous sets, sumptuous costumes and intriguing storylines for Series 2, which will take us all the way to the defining Battle of Culloden. Paris the city is represented by Prague, whose eighteenth century streets are still as they were, and all the sets and tres chic costuming were created in Scotland. Diana Gabaldon’s Dragonfly in Amber, served as the basis for the scripts for Outlander Season 2, one of which she has written as in Season 1. 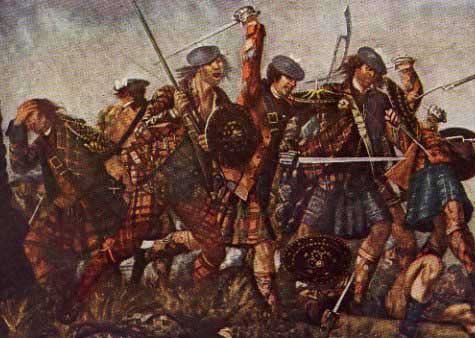 The cast of STARZ Outlander, Series 2 in France

It was in 1744 that Bonnie Prince Charlie, Charles Edward Stuart whose grandfather James II (1633-1701) had fled the throne of England in 1688 throwing the seal of England into the River Thames was replaced by the Protestant monarchy of William III of Orange and his wife Mary, also James II’s daughter.

Living in France his grandson Bonnie Prince Charlie (Charles Edward Stuart) assumed command of French expeditionary forces after his father had obtained the support of the French government for a projected invasion of England.

Unfavourable weather and the mobilization of a powerful British fleet to oppose the invasion led to its cancellation.

The ‘King over the Sea’ as he became known, Charles Edward styled himself on James III, persisting in his determination to drive George II of Hanover from the British throne.

He advanced from Edinburgh as far south as Derby in England, before being forced to retreat and his forces were utterly routed at Culloden Moor.

In Series 2 of Outlander Jamie and Claire will endeavour to change the course of history. Ooh la la!

Can’t wait! If you haven’t caught up with all the action of Outlander  – BINGE ALL OF SEASON 1 FREE – NOW

Austin Mahone from Texas is making a mark as a singer-songwriter on the pop music scene right now, by using his social media networks to grow his reputation