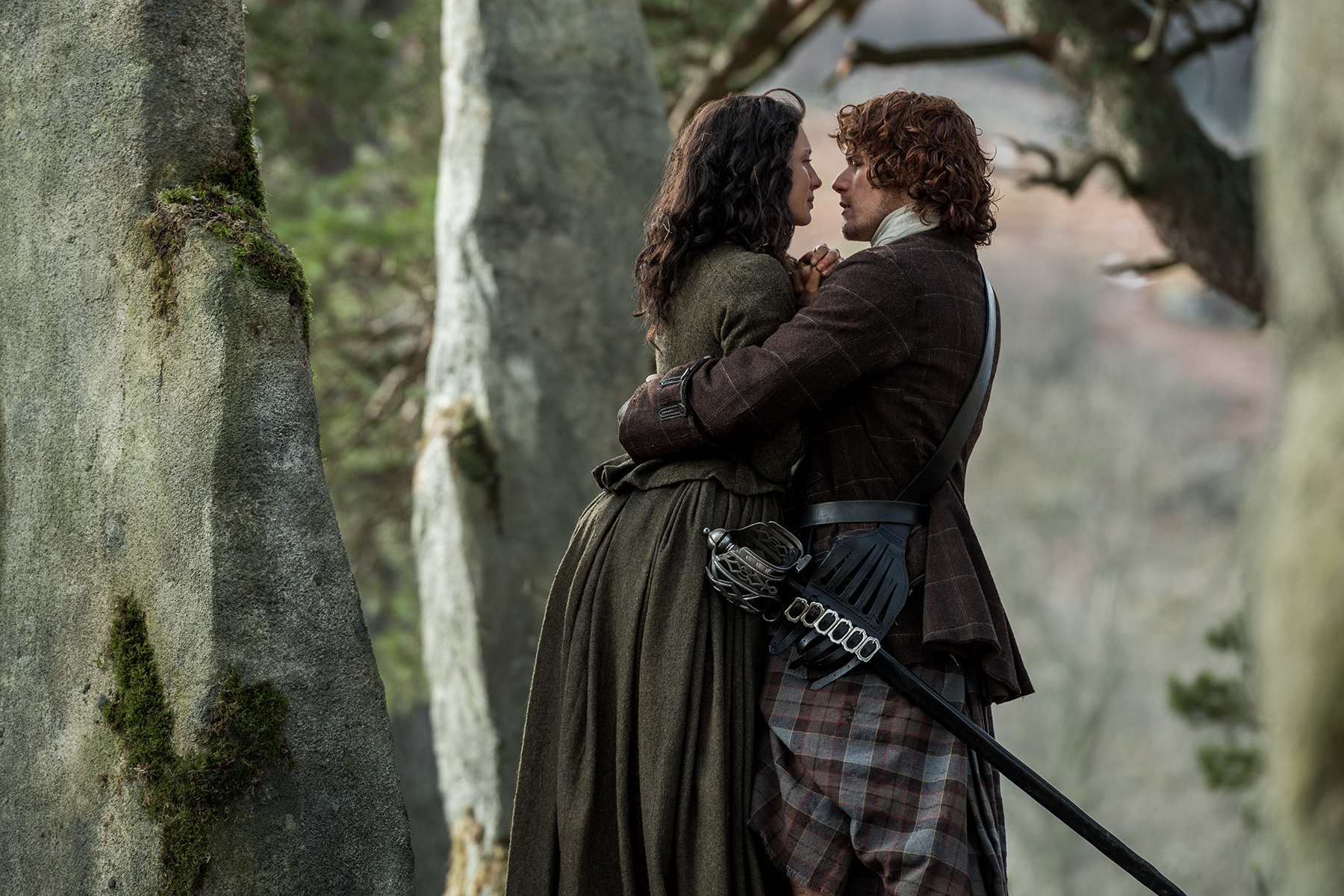 Outlander Series 3 written and developed by Ronald D. Moore for STARZ from the books by Diana Gabaldon is back and it has been well worth the wait. This wonderfully written, powerfully acted, superbly costumed period drama features two main lead characters played by actors fans adore Caitriona Balfe and Sam Heughan.

In Series 1 World War II combat nurse Claire Randall (Caitriona Balfe) having married Frank Randall (Tobias Menzies) an historian and academic, is visiting a cairn of standing stones in Scotland where they have gone for their honeymoon, when she is mysteriously transported back to 1743. Trapped in the past Claire has had both happy and heartbreaking adventures with Jamie over the past two series, including getting married and going to live for a while in Paris.

When we left Jamie and Claire in the finale of Season 2 Jamie, who knows all about Claire coming from the future, tells her the Battle of Culloden will happen today. He reminds her she promised to go back through the stones so he would know she and their unborn child would be safe.

Devastated she agrees and finds herself back in 1948, pregnant and in distress, endeavouring to explain herself and where she has been to Frank, who has been quite lost without her during the time she has been gone.

Now a Professor Frank decides to accept a posting to a University in America taking Claire with him so they can start a new life. However it will take her some time to leave the old one behind, although she will try. In Episode 1 of Series 3 at first we are back in Scotland on the large, sad and desolate moor where Bonnie Prince Charlie, who together with the support of the Highlanders, expects to win the forthcoming Battle. He’s seeking to claim the British Throne, the culmination of centuries of such claims by the “Scottish Pretenders”

The Battle of Culloden was the last major military campaign conducted on British soil and degenerated into a massacre of the Highlanders by the Duke of Cumberland, a son of George II.

When we arrive we find Jamie lying on the field with Frank’s ancestor Captain Jonathan Wolverton Randall, aka “Black Jack” (Tobias Menzies) on top of him dead. Jamie is injured and in pain, thinking of the horrors of the battle, thinking of his love for Claire and thinking of Bonnie Prince Charlie and how the Highlanders failed.

What Claire told Jamie when they first met has come true… although she did not know Black Jack Randall would die at Jamie Fraser’s hand. Coming across each other in the heat of the battle as they lunge across the field at each other the rest of the battle fades away as they virtually dance a combative sexual pas de deux, a reminder of their interlude together in Series Two.

Their eyes meet, and as Jamie and Jack lash out at each other there is a sense that love and hate certainly go hand in hand. It’s fitting they should fall to the ground together in a quasi lover’s embrace as Jack dies. Bravery certainly wasn’t the Scots problem, as they charged into the fray on Culloden Moore but they were outgunned and outmanned by the English at every turn.

Jamie now wounded badly is trying not to make a sound as the English are going around the field bayoneting survivors.

Night falls and he wakes up in the cold and snow, imagining a young woman walking across the field toward him … and as she gets closer he sees it is Claire, but is she an apparition. Yes, it’s a few of his friends led by Rupert McKenzie who have come to save him.

Are you alive … they won’t see Jamie, who has a certain reputation for being fierce and fearless, left to die in the cold and the mud? As they take him away he drops his piece of amber with the ‘dragonfly’ trapped inside, a wedding gift they had received, one symbolic of his and Claire’s love. Now we are in Boston and it’s 1948. Claire and Frank have just taken up residence in a new large American ‘classic’ style home.

Claire is endeavouring to manage a gas stove. It’s been a long time since she has cooked any food except by campfire. Nellie Nelson a near neighbour comes to help her bring in firewood so she can cook in the fireplace, which Nellie thinks is very romantic.

She tells Claire how lucky she is – you won’t find another man like Frank again. Claire smiles wistfully remembering the love of her life Jamie and what they have shared. Claire’s very pregnant when she and Frank go to meet his colleagues at the University. What a smug awful lot they are. When Claire offers her opinion she is swiftly put down and back in a ‘woman’s place’ as the little wife at home… no respect there.

When Claire and Frank arrive back home she says she would like to apply for American citizenship, as she wants to give her baby a home of its own. They row, as he’s wondering how she can walk away from her history and the England he loves.

“My employment provides us with residency” here he says. That’s not what this is about… I want my child to have a real home. However he doesn’t want to understand what she went through in the past.

“Go or stay, do what you really want to do”… he says and storms off. Back in Scotland Jamie is being fed and looked after in a barn by friends when the English arrive with orders to kill them all. The English officer in charge Lord Melton gives them an hour to write any letters they need to complete. Well they are all ‘civilised’ after all. They take them out one at a time, boys and all.

Having taken all the able bodied men first when they get to the wounded Lord Melton who overhears Jamie and another friend talking, asks Jamie is he the Jacobite known as Red Jamie?

When he replies, he asks “Does the name John Grey mean anything to you?” He then recounts to Jamie a time when he spared a young English soldier his life and the boy made a promise he would owe Jamie a debt of honour.

It turns out John Grey is Lord Melton’s brother.

Lord Melton orders his aide to go and find and ready a cart and driver to take Jamie home to Lallybroch and they set out across the countryside on a jolting ride that would kill most men.

Fate for Jamie however has dealt a different hand than what he imagined. His sister is overjoyed to see him, wounded or no.

Back in Boston Frank is watching the clock as he writes to his friend Reverend Wakefield, asking him to research a James Fraser for him. Claire comes to the door to tell him her waters have just broken. Frank rushes Claire to hospital where against her wishes the Dr administers an anaesthetic to deliver her baby. When she wakes up she finds Frank with the baby, which is a girl.

The nurse asks… where did she get her red hair? Indeed.

Not sure how long the fans can all bear waiting for Jamie and Claire to come back together again… it will take twenty years. Thank heavens TV is a medium where we can speed things along.

Sculptors combine creativity, beauty and mystery to create a unique and almost timeless atmosphere with their wonderful works, none more so than Edmé Bouchardon