She’s now Claire Randall, married to Frank Randall a descendant of Jamie’s nemesis. They are living in Boston where she is studying to become a Doctor and they are bringing up Jamie’s red-haired daughter Brianna together.

They are also both haunted by the events of the past. The turbulent history of Scotland has the power to capture the imagination and offers an insight into the rich heritage of a past that shaped its distinctive character, including spectacular views, fabulous castles, lochs and lakes and the customs attached to the life of the clans.

After the Battle of Culloden, which Jamie amazingly survived, to make sure the English controlled the populace they dispersed the clans and passed a law in parliament in 1746, making the wearing of tartan a penal offence.

Jenny his sister asked of Jamie at the end of Episode 2 ‘have you not seen the inside of enough prisons in your lifetime’, when answering his request to ‘give him up to authorities’ and claim the ransom, money the family needs if they are to survive at Lallybroch. In Series 3 Episode 3 Jamie is now living in Ardsmuir Prison where he is however more or less content with his lot, his best friend and kinsman Murtagh (Duncan Lacroix) by his side. His being in gaol in the first place is a sort of self-punishment if you like, because life without the love of his life Claire at his side for Jamie is a penance of the worst kind.

Rats abound in the cells and water to wash in is definitely at a minimum and with Jamie in irons, secured by both the wrists and ankles, hope doesn’t seem to be ‘eternal’… what will happen to secure his freedom, is the question fans are asking. Over in America, and in Boston it is 1956. Frank is putting black pudding and bacon on the kitchen table for breakfast… he wants to replace Brianna’s beloved Dr Seuss with a love for Charles Dickens… giving their ‘daughter’ a sense of her English heritage.

Claire asks Frank would he like to go to the movies, but to her surprise he’s seen them both. He’s being discreet he says, as they agreed they would lead separate lives. However in being confronted by the fact he has seen the latest movies with someone else doesn’t really sit well with Claire and she’s uneasy.

Back in Scotland it is 1755 and Lord John William Grey is the new Governor, taking over the prison Jamie Fraser is secured within. Its six years since Culloden and the retiring Governor tells his youthful successor that he has dined with Fraser once a week. He advises him to do the same, for without his cooperation, you will not survive here he observes. The guards are terrified of Red Jamie and the prisoners have his respect… he’s their leader and they won’t do anything without his say so.

The old Governor assails John Grey with stories of how Bonnie Prince Charles is reputed to have left a fortune behind, which everyone’s trying to find…a welcome diversion from the horrors of daily life. But is it true?

Jamie reports daily to his clansman Murtagh, who is not well at all, comforting himself by gazing lovingly at a small piece of tartan he has to keep hidden. The unique ‘chequered’ patterns imparted great dignity to his family over the centuries and like all Scots he is fiercely attached to their symbolism; which is about bravery and honour. 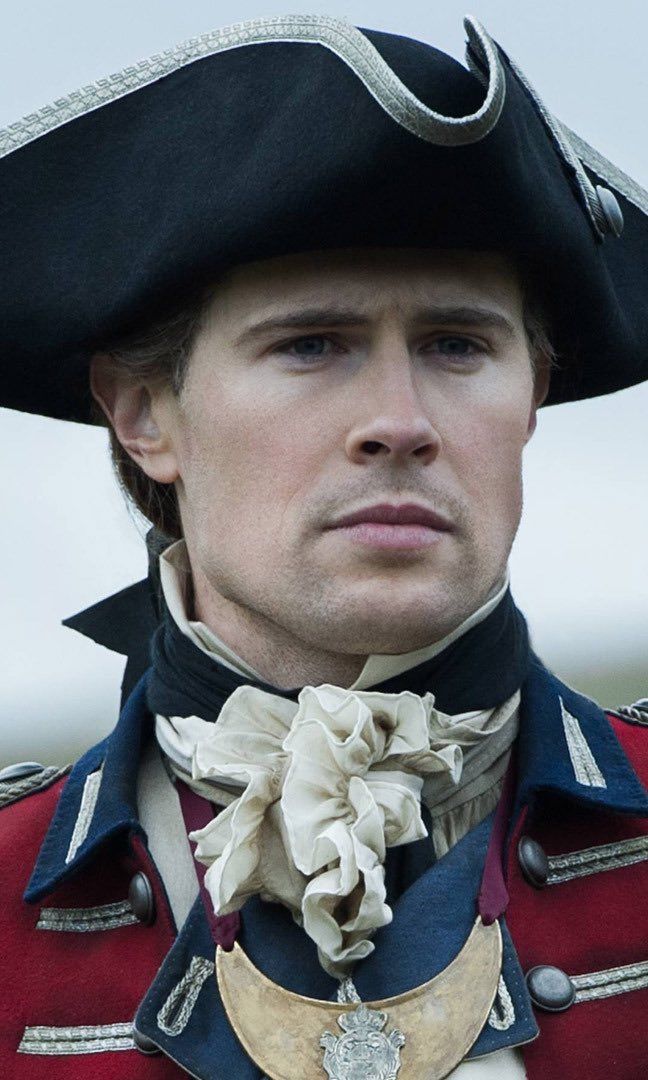 The Governor Jamie tells Murtagh is scarce more than a bairn. He cannot place why he believes he knows the young handsome English Gentleman Major John William Grey (David Berry).

The Governor sends for Jamie to be brought to his office and introduces himself, asking him if he is acting as spokesmen for the prisoners. Noticing a rat scurrying on the floor where they are about to serve his dinner, he demands each cell be supplied with its own cat, although Jamie warns the new Governor against the move if he really wants to stay on the good side of the prisoners.

Horrified, he retorts “they don’t eat them” … “…only when they are lucky enough to catch one” replies Jamie.

It is clear the new Governor has a lot to learn about life in prison for the defeated Scots. Back in Boston in 1958 Claire is celebrating graduating and becoming a Doctor with all those who will be her new colleagues. A woman comes to her front door, and looks embarrassed… she’s Frank’s mistress come to pick him up.

Embarrassed Claire gathers up her coat and invites her friends to join her elsewhere-taking Brianna with her. Later she and Frank quarrel… she cannot believe he invited her to where their daughter lives and berates him for humiliating her in front of her new colleagues.

He retorts that it was ‘your idea to live separate lives… Astonished Claire discovers they have also made love in her bed… you deliberately wanted to hurt me. Frank retorts I wanted to give you a taste of your own medicine Dr Randall. Frank is one unhappy man. Let’s stop with the pretence Frank, file for divorce she says, but he won’t, he doesn’t want to lose Brianna out of his life, well at least that is what he says.

Back in Scotland in the eighteenth century soldiers are on the road with a bunch of prisoners when they come across a delirious or is it a deranged man Duncan Kerr wandering on the road talking about ‘gold’.

The Governor sends for Jamie. He wants him to translate what the prisoner is saying as he’s speaking in the Gaelic and a little French … he refuses, until John Grey offers to strike off Jamie’s irons if he does what he asks.

They bargain and Jamie says he will offer a full and true account… if Murtagh is given a blanket and medicine. Kerr is raving… telling Jamie the gold is cursed… do ye be warned lad… and he talks of the white witch who will come for you, he says to Jamie before he dies. Back in the cells Murtagh tells Jamie it was only a mad rant… you are thinking after all these years… it’s Claire he was talking about. He often wonders what ever happened to her and the wee bairn she was carrying.

Jamie replies I try not to think of them….

Now having dinner with the Governor he asks if he would give us leave to set snares on the moor to catch game and to gather watercress to stop us getting scurvy. They eat pheasant together. His proposal is accepted. And a working party goes onto the moor to check the snares.

The prisoners hide Jamie in a hole in the ground…3 days after Jamie has disappeared he confronts the Governor on his own turf… he has remembered who he is. He reminds him of what he had said all those years ago when Jamie spared his life… that I owe you my life and once my debt is discharged then I will kill you. John Grey declares he is not a murderer of unarmed prisoners. I spoke to you of my wife… she was a ‘white lady’ a ‘witch’ some thought.

When the Governor questions him about the gold, Jamie tells him that King Louis had never sent gold to the Stuarts.

As Jamie and the Governor play chess he discovers the Governor lost his best friend at Culloden. He was the reason I joined the army, he tells Jamie.

John Grey and Jamie now seem to have settled into a friendship of sorts. Unburdening himself the young man confesses… he inspired me. Jamie realises that like Black Jack, the young man would prefer to have a man in his life more than a woman. He tells him his brother said I would ‘overcome it’ or come to terms with his ‘affliction’ in time. And that’s something he’s trying to do.

He observes to Jamie that there are some people you grieve over forever. However, the greatest burden is in caring for those we cannot help and he reaches out and touches Jamie’s hand, only to be harshly rebuffed. He doesn’t understand the horrific history behind Jamie’s recoil.

Jamie realises however he owes John Grey a debt too… I wish to thank you Major, for what you did for my wife. You did not know Claire was my wife at the time I put a knife to her throat in order to make a young man talk…  he tells him how much he admires him. You were a worthy foe. You thought you would save her life and virtue at no thought of your own. Back in Boston it is 1966 and Brianna is graduating High School. After they arrive home Frank tells Claire he has been offered a position at Cambridge… he wants to take Brianna and wants a divorce.

Brianna is now 18 and able to make her own life and Frank wants to live the rest of his life with a wife who loves him. Claire accuses him of just ‘biding his time’ to hurt her more.

You know I thought you would have forgotten him in time, he says to Claire of Jamie and she replies “… that amount of time does not exist.” Back in Scotland the British are closing the prison and the prisoners are being sent elsewhere or transported to the colonies. Jamie is tied to the Governor’s horse and for three days they travel across the moors.

He’s putting Jamie into service with a Lord not disposed to the descendants of Bonnie Prince Charlie, because despite his brother having discharged the family debt, John Grey admits he wants to discharge the debt he owes Jamie “…for my own sake”.

In Boston Claire is called to the hospital for an emergency operation and when she comes out of surgery is brought the news there has been a car accident… it’s Frank. His sudden and unexpected demise will certainly change Claire’s once again, she’s now free to find Jamie once more.

If you want to find a fascinating array of antiques or art to tempt or inspire, then you cannot go past the AA&ADA Melbourne Antiques & Art Fair, May 5-8, 2016