This has been confirmed, but then he disappears from the records again and Claire (Caitriona Balfe), the love of his life, has given up hope of finding him and returned to Boston from Scotland with her and his daughter the now grown up Brianna (Sophie Skelton).

Jamie’s real name has been changed to Alexander Mackenzie and he’s just left the great estate of Helwater in the north of England, where Lord John Grey placed him in service to Lord Dunsany, given his freedom by Lady Dunsany after saving their daughter’s newborn son’s life. He was headed for his ancestral home of Lallybroch and from they’re to find a new life when we left him last episode. Having watched over young William during his formative years, he is leaving the boy in the care of Lord John Grey (David Berry) and his soon to be wife, Isobel Dunsany (Tanya Reynolds), who know that William is really Jamie’s son.

He’s assured they will take good care of their charge, because they know the truth and the three have forged their friendship in what at times must have felt like the fires of hell. Episode 5, Whiskey and Freedom starts in Boston 1968. Claire, now a surgeon, is operating on a patient pushing herself to exceed boundaries of both knowledge and skill with her friend Jo Abernathy (Wil Johnson) assisting in awe.

Brianna is in class at Harvard University, where the tutor is discussing a poem by Robert Longfellow. However she is lost in her thoughts, a state she has been in ever since the many she believed to be her father Frank Randall has died. She’s learning how fictional prose can alter the perception of history and it’s a point she takes to heart, as she wonders how the story her mother told her about who her real father is can be true.

After class Brianna’s tutor tells her she is failing at Harvard… and needs to turn it around… whatever it is that is taking her focus and attention away from her studies.

There is no doubt Brianna is missing Frank. He was after all a major part of her life to date…. and she reflects on their time together, looking in his box of possessions left behind containing photos of her as a baby and more Back at the hospital Claire and Jo are having a drink together at the end of a long day where he’s probing her past too… he wants to know did she meet someone in Scotland as she’s been distracted ever since she returned.

“Was it serious” he wants to know…”…as serious as it comes she answers “I hoped we could find each other again… but it has proved not to be”. Later that night Roger Wakefield (Richard Rankin) arrives in Boston, on the eve of Xmas, wondering if this is the most brilliant or the daftest thing he has ever done.

Claire and Brianna are shouting at each other when he arrives and Brianna flings open the door in anger. She and Claire are both startled… and he realises clearly he has come at a bad time, or has he. Will he be a saviour for them both?

Brianna has decided to withdraw from Harvard and is in the middle of moving out… saying to her mother I tried to come back and be whom I was…. but I need a break and she leaves, apologising to Roger on the way saying she’ll come and spend the day with him tomorrow.

Roger stays with Claire and they talk – it’s his first Xmas without the Reverend Wakefield his foster father. He explains, I was hoping to try an American Xmas, to see if I can make a change and he asks Claire if he can pour her a whiskey… I have some news. As you know I am an historian, he explains, that’s what I do… and I am like a dog with a bone. There is no gentle way to say it. I have found Jamie Fraser he tells, her.

He shows her a publication written and printed in 1765… with the quote “For as has been known for Ages Past, Freedom and Whiskey Gang together”

You told me, he says, you quoted that line to Jamie

“You think he wrote this”…she asks… “I do”… He explains how Scottish poet Robbie Burns was only six years old at the time it appeared in print first, published by Alexander Malcolm…  it would be much later when it appeared in the final stanza of his poem* If you will look again and see, Alexander Malcolm was the printer living in Edinburgh in 1765… only a year ago on our timeline to connect you with him, he tells Claire… and aren’t Alexander Malcolm two of Jamie’s given names.

At first Claire is unbelieving, rejecting his finding… she’s scared…. 20 years ago she tells him, I shut the door on the past and it was the hardest thing I have ever done.

This is proof positive he tells her… you can now go to Jamie. Thinking aloud she says “how could I leave Brianna and go to him now with all she is going through”… “how can I help what can I do”, he asks in return. Claire makes him promise not to say anything to Brianna I know you meant well… but she needs to think.

Talking to Jo over the archaeological bones of a woman… she tells him she told Brianna that Frank wasn’t her real father. “Do you still love him, this man of yours” he asks her… “I never stopped”.

He observes aloud that he has watched her live a half-life for the past 15 years…and now its time to be true to her and her alone… you should go, Brianna would understand.

Brianna takes Roger to see Harvard’s hallowed halls. There’s a special naming ceremony for a new scholarship to be Frank’s legacy that afternoon at Harvard.

They are standing among reminders of European history, Gothic arches, when he tells her how he has few memories of his real father. However, finding out about him helped me to know myself, he offers.

Brianna is sceptical… what if it was a story made up just to make you feel better… what is history… it is just a story… it changes from different perspectives …history cannot be trusted, Brianna responds.

During the gathering at Harvard Claire is there too and meets Frank’s former lover, the woman he wanted to leave Claire and marry, telling her just before he was killed in a car crash. 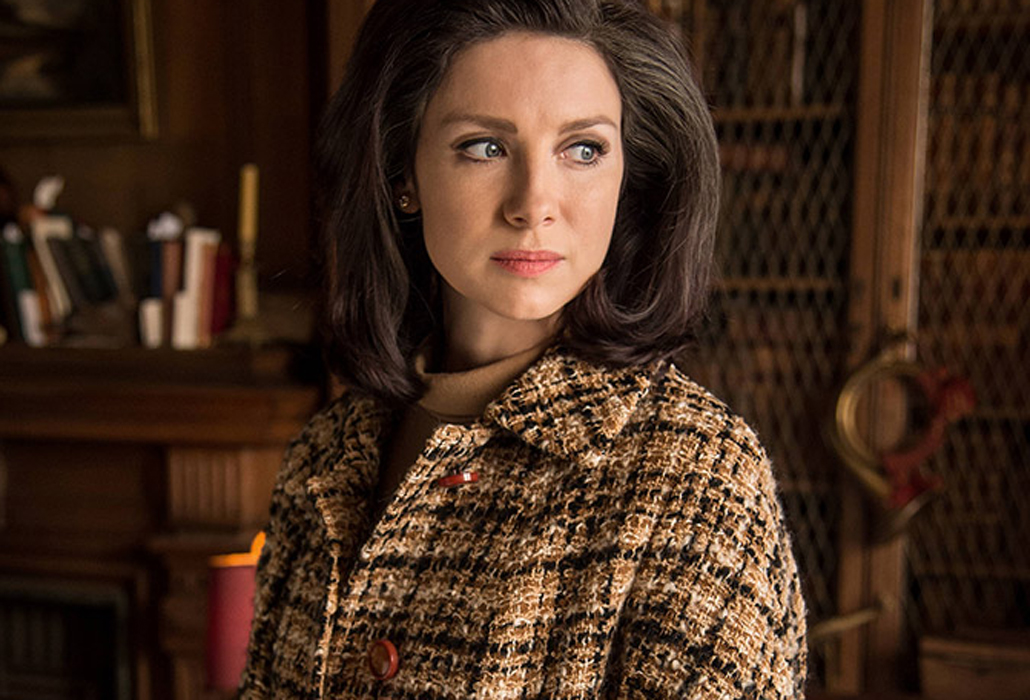 She tells Claire, you should have let him go… you were selfish. He was the love of my life and you threw away 20 years with him… I would have given anything to have just one more day with him. Claire understands only too well. Brianna reminds her mother later that back at the stones you promised there would be no more lies between us. You told me I looked like Jamie… my father – My birth was the reason you lost him.

She shows Brianna the work Roger has done… and overjoyed she tells Claire “you can go back…I am all grown up Mama… I love you but I don’t need you, not the way I did when I was little”. The question for Claire remains ‘how do you take a trip like that and ever come back’. Claire tells Brianna if she does go, it means she may never come back or see her again. But Brianna is brave, she knows “… it won’t be easy…I am more you than either of my fathers and I will be fine if I am half the woman you are. I want you to go back and find him, now I have to give him back to you”… Brianna tells her.

Claire makes her own costume to wear when she goes through the stones. Brianna gives her a gemstone to aid her journey as she’s lost one on the both occasions she has gone through before.

Freedom and Whiskey is the toast that Roger, Brianna and Claire share before she leaves Boston forever.

Alone, Brianna and Roger now start their life together by reading from Charles Dickens A Christmas Carol, making new memories. Claire steps into Edinburgh and a puddle on the cobbles on her way to find Jamie. She doesn’t have far to go in the old town and, as she climbs the stairs to his office…she’s hoping against hope she will find him there. But will she?

Yes… there he is reading a proof over his printing press. When he hears her voice saying ‘it’s me’, Jamie turns ever so slowly not understanding what it is he is really hearing. To his surprise it is his Sassenach. Stunned for just a moment, Jamie cannot believe his eyes or what his heart is telling him and he faints dead away as all our hearts swoon.