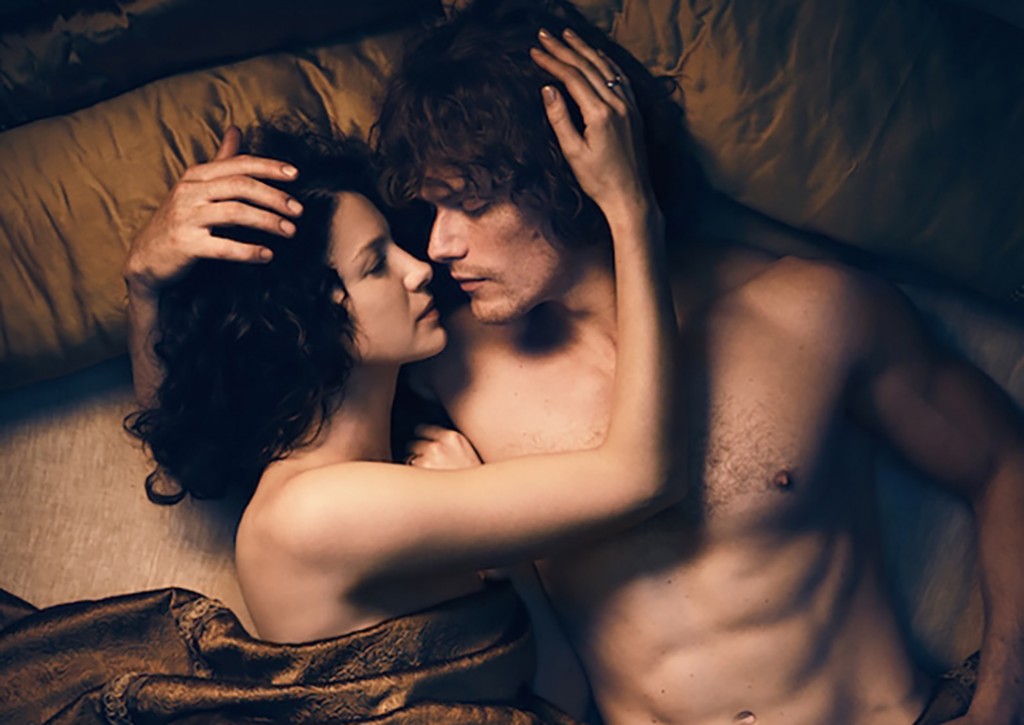 Outlander, Starz hit Television Series 3, Episode 7 – Crème de Menthe, begins with a violent scene and progresses through a series of disjointed incidents as writer Karen Campbell and Director Norma Bailey set up the scenario that will play out now for the rest of the season.

Must admit I found this the most unsatisfying episode so far, except for a few highlights. Last week our happy couple Jamie (Sam Heughan) and Claire (Caitriona Balfe) came back together at last emotionally, spiritually and physically and now, just as they did twenty years ago together, they are once again causing trouble for all of those in their circle.

When we left Claire she was being attacked by the man she found searching Jamie’s room upstairs in the brothel where they are, for the time being, living. She had to fight hard, many men at that time only believed women existed to satisfy their lusts. 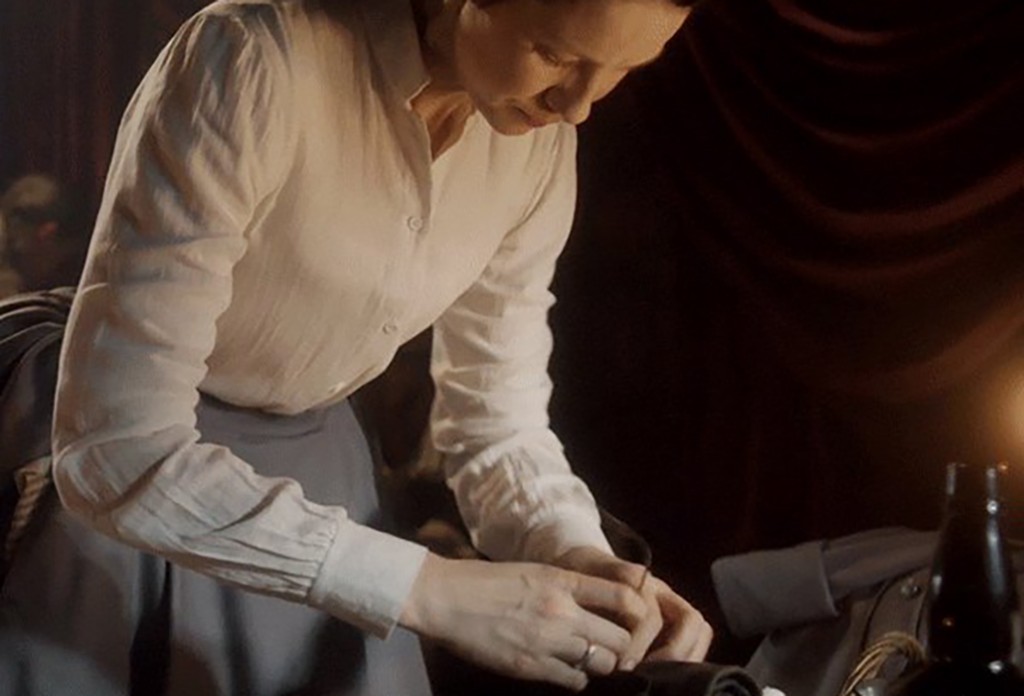 She fights hard to protect herself and the stranger seems to be getting the upper hand until he slips on a loose rug on the floor. Suddenly he’s falling backwards and hitting his head on the hearth knocking himself unconscious.

Seconds after this has happens Jamie opens the door just in the nick of time, with Madame Elise (Michele Belgrand) and Fergus (Ceesar Domboy) on hand to witness Claire with a knife in her hand and a man lying prone on the floor.

They quickly realise he’s an excise man trying to find proof in their bedroom Jamie is smuggling far more whiskey and wine than he is currently telling Sir Percival Turner (Paul Brightwell), the government official taking backhanded bribes from Jamie, based on the quantity being smuggled. 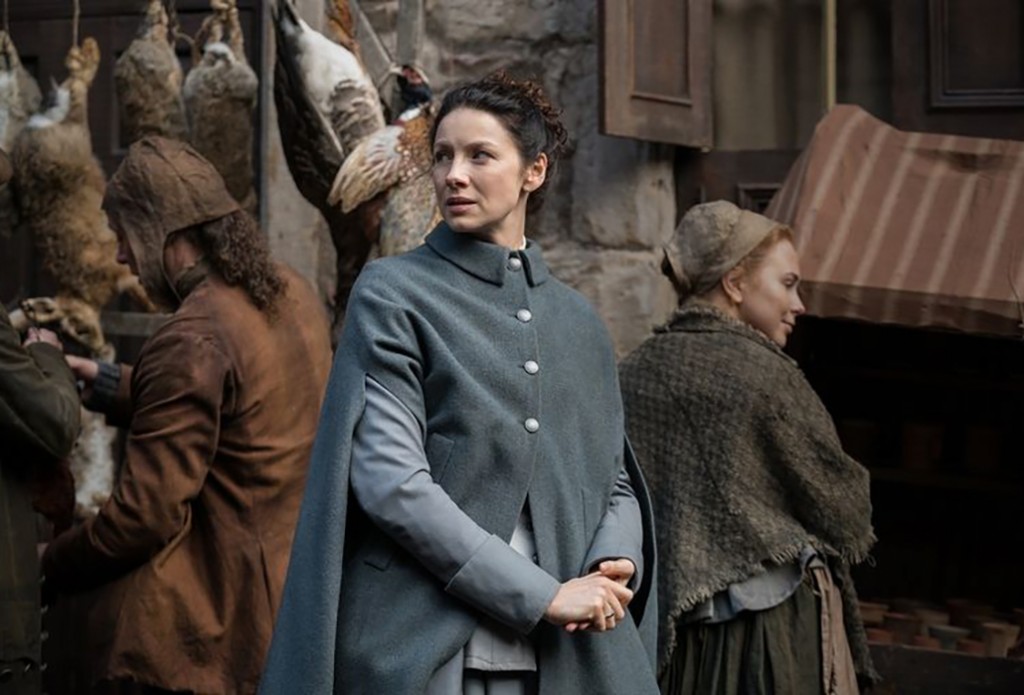 Next thing Claire defying all logic, is going to operate on her attacker, after all along with Jamie we have to accept that she is a surgeon dedicated to saving lives, not taking them… although it is a stretch for the others.

It must be very confusing going back to the bawdy devil may care attitude of thee eighteenth century after the sophistication of living and operating in a hospital in Boston in the twentieth century.

Jamie can only look on helplessly as she dresses to go to the Apothecary for supplies, insisting she must save her attacker’s life. This is hard for her lover to swallow because the villain had just tried to end her life. He wants to send Fergus with her or her safety… but she refuses, reassuring him she will be alright wandering the streets of Edinburgh alone. 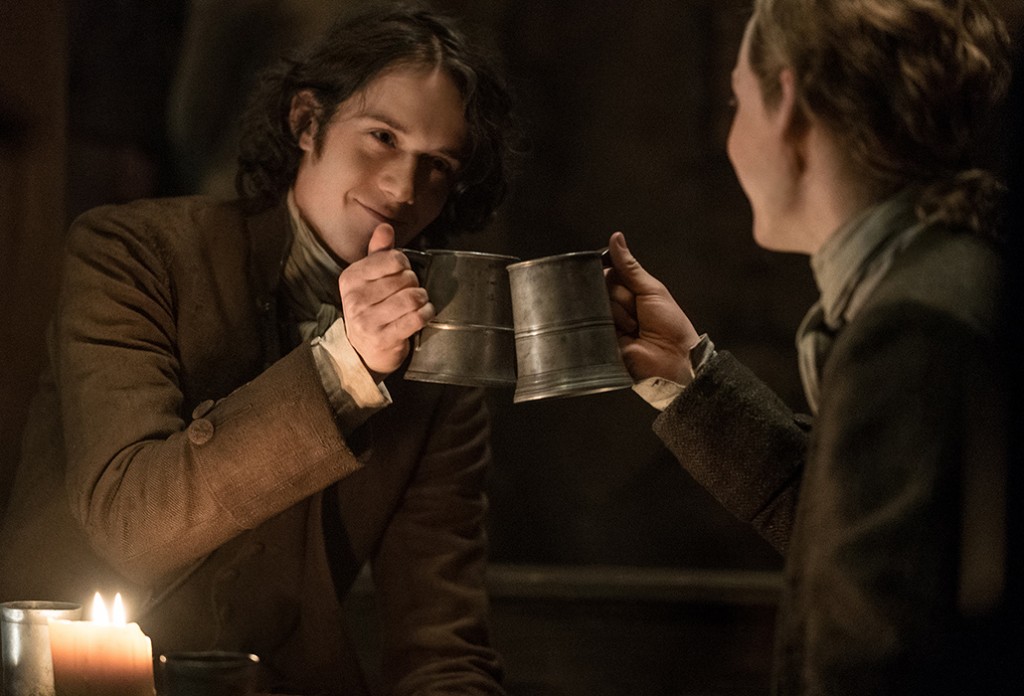 In the meantime, Jamie, young Ian Murray (John Bell) and Fergus his cohorts begin moving the goods out of Madame Elise’s cellar in a hurry.

Jamie gives the task of selling the remaining contraband to young Ian Murray … who does so quickly for 75 pounds, along with three casks of Crème de Menthe he knows they have stored in another warehouse as well.

Meanwhile Claire arrives at the Apothecary to pick up a Bottle of Laudanum and other medicaments that total two shillings. There she runs into an Archibald Campbell (Mark Hadfield) buying supplies to help his sister Margaret Campbell (Alison Pargeter) in her hour of need.

So, Claire can get ahead of him and fulfil her requests in a hurry, she promises she will come around to his house later and treat his sick sister free of charge.

Back at the brothel Mr Percival arrives to search the premises, especially the cellar, where apart from water spilt on the floor he fails to find any trace of smuggling. 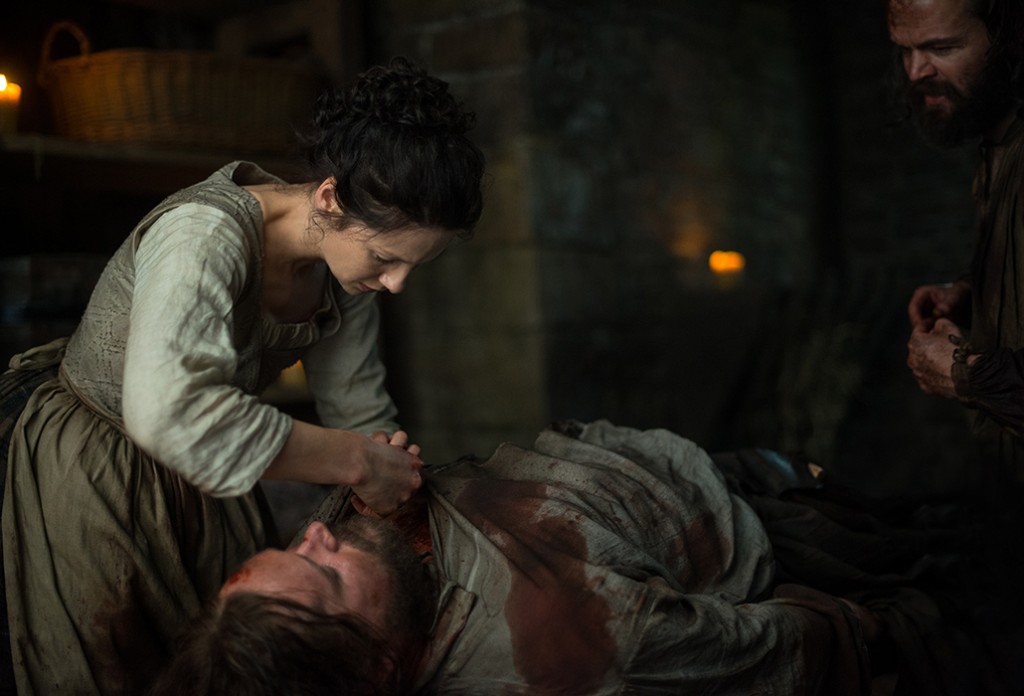 Meanwhile upstairs Claire is operating to release the pressure on the excise man’s skull in an effort to save his life with Jamie’s partner Yi Tien Cho aka Mr Willoughby (Gary Young) watching on with fascination.

However, the patient dies and now there is a body to hide. Honourable wife fought hard for his life… says Yi Tien Cho to Jamie, who is not really feeling warm and fuzzy to someone who tried to kill his beloved ‘Sassenach’.

Claire is being stubborn, selfish and arrogant…” I have dedicated 14 years to healing people and respecting human life” she says pompously and Jamie retorts “… you do have an opportunity to put your skills to use here like the last time you came”.

He’s upset “I would give up everything I have for us to be together again”, Jamie tells her “… since you left I have been living in the shadows… and when you walked into the print shop and you brought the light right along with you”.  At the moment she seems intent on dimming it.

You will not go to the Campbell’s alone… Fergus will go with you, but she refuses again … independent and selfish to the last. “You will return afterwards” Jamie asks? 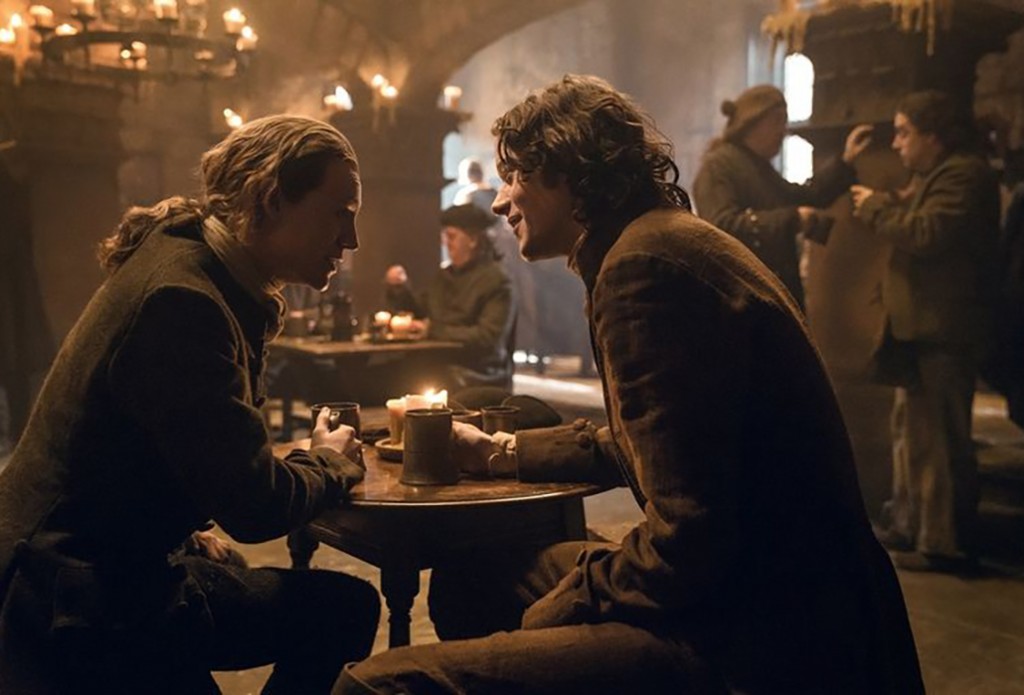 Fergus and young Ian are in a tavern talking about Aunty Claire as Ian has no memory of her and knows Fergus does. “She was fearless… she could heal men cut up by cannon fire” … she created a legend around herself about being a ‘white lady’

Fergus and Ian also talk about selling the goods on for Jamie and Fergus observes to Ian ‘we make a good pair… perhaps we should go into business together!’

Ian also doesn’t know he’s being watched or followed by a one-eyed man. He and Fergus talk about the ‘art of seduction’ and he sets Ian up to invite the tavern girl Brighid (Zoe Barker) he admires later to his bed. 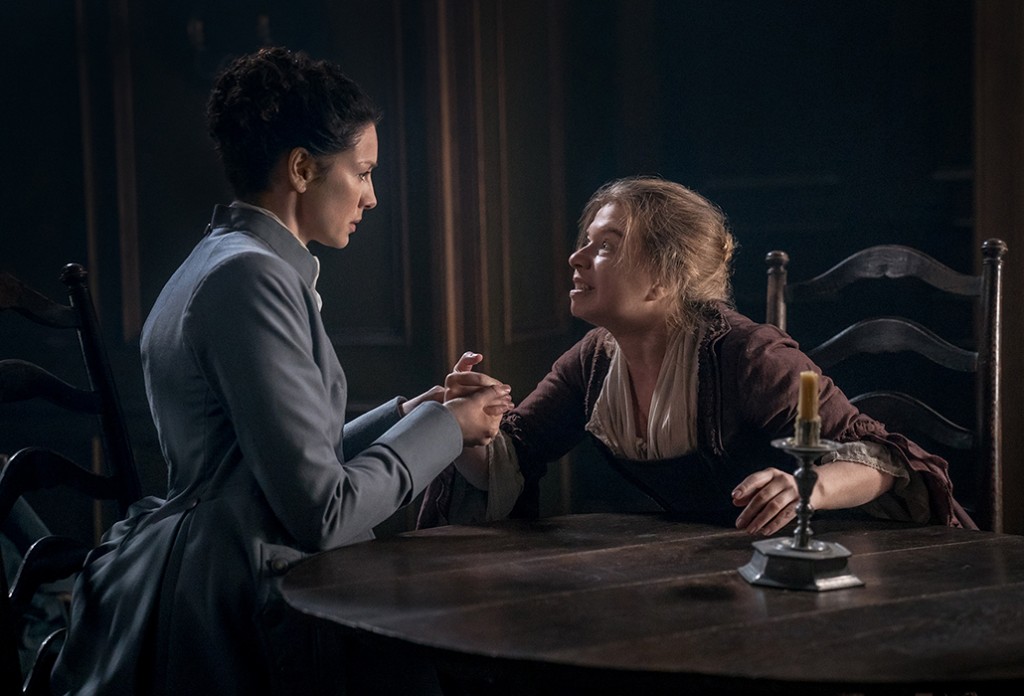 Claire arrives at the house of Mr Campbell and his sister Margaret… who is more than anxious, despite her being on Laudanum.

She asks him lots of questions realising her subject has severe mental health issues, even though her brother believes her to be a ‘seer’.

He tells her they are leaving for the ‘Indies’ tomorrow and you soon realise this will be the lady whose historical ‘headless’ skeleton Claire had recently examined back in Boston.

Meanwhile young Ian has taken Brighid to The Print Shop, where we discover he is the one who sleeps in the camp bed, not Jamie after all. 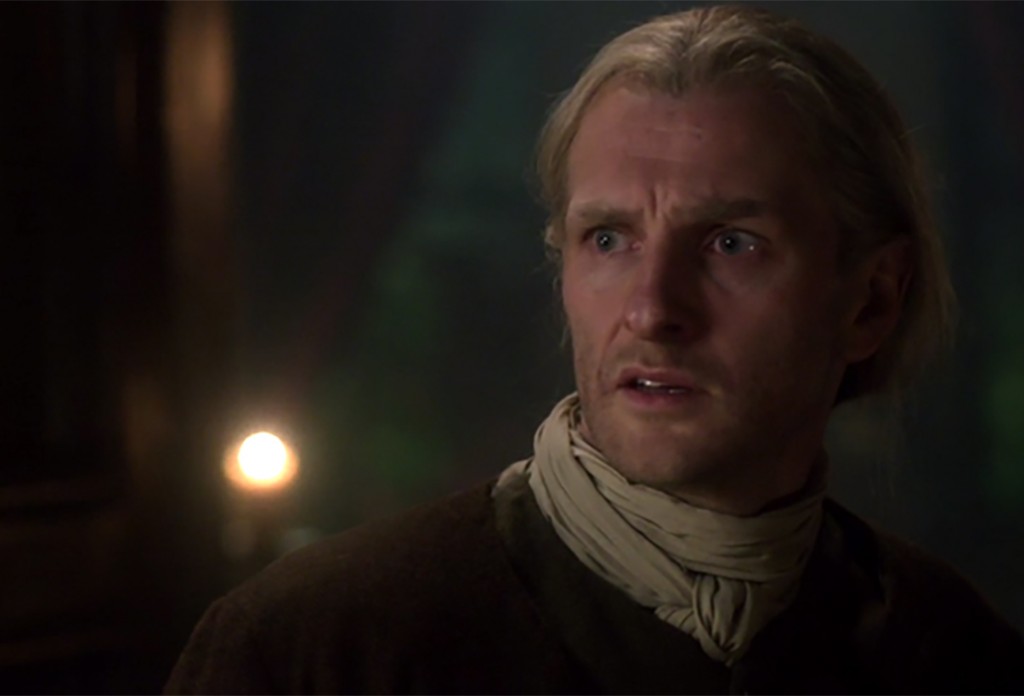 His father Ian Murray Snr (Steven Cree) suddenly turns up at the Brothel and after being overawed and  pleased at seeing Claire again, asks Jamie has he seen his son Ian. He has been missing for some time. Jamie denies knowing his whereabouts and Claire watching on is incensed.

Out of earshot as he’s leaving Ian cryptically asks Jamie how Claire took his “news.” Jamie explains he was waiting for the right time to tell her. Ian scoffs: “You might be waiting forever then.” Jamie assures him, “all will be well”. More chaos to come.

Meanwhile in the back room of the Print Shop Ian is making love to his young lady when they hear the one-eyed man searching upstairs and he sends Brighid out the back door to safety. He goes upstairs to confront the intruder and a tussle between the both ends up knocking over a lamp, setting a fire going and bursting open the secret door where the seditious pamphlets Jamie prints are hidden. Taking a bundle for proof, the thief escapes.

Young Ian tries to put out the fire but fails, ending up locking himself into the cupboard in the hopes of surviving as it spreads like wildfire. Claire and Jamie are arguing when Claire asks him ‘how long since you have you lied to your family’, she’s horrified he would do such a thing, knowing what caring parents Ian and Jenny are.

She’s more than disappointed… have you forgotten how we lied our way through Paris he says. You have no idea what it is like to be a worried parent, she says, a comment which cuts him deeply and so he goes back at her… asking was Frank a loving husband to her.

Suddenly news comes of the fire at The Print Shop and they both arrive to find it well alight. Realising his nephew is still inside, Jamie dashes into the flames to find him and bring him to safety, as well as the small portrait of his son. 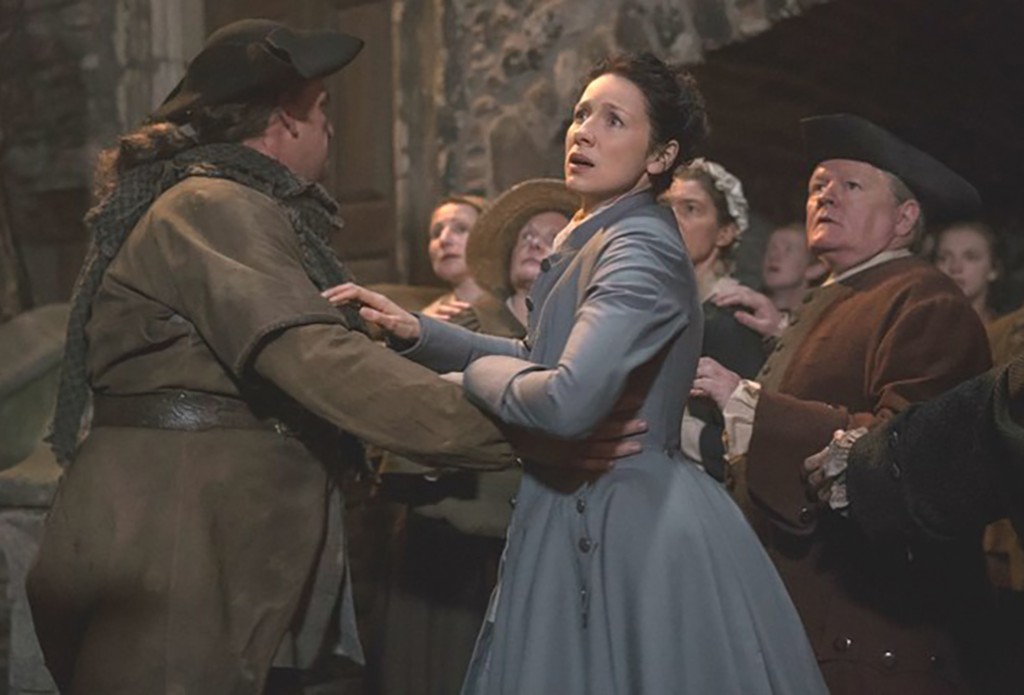 By then, A Malcolm’s Print Shop is beyond saving, and we can only watch on with Claire and onlookers as the whole building is engulfed by fire. Jamie fights hard inside to find an exit for he and Ian both and finally, safe at last, when they hear his story, they know they are all in trouble especially if Jamie is charged with sedition.

Jamie quickly has to disperse his team of followers, asking Yi Chin and Fergus to take on urgent tasks while he flees with young Ian and Claire to Lallybroch.

The only good thing he believes is Sir Percival only knows him as Alexander Malcolm of Edinburgh and not anyone else, so it’s time for him to change identity once more. A Malcolm Printer and Bookseller is now definitely a man consigned to the past.