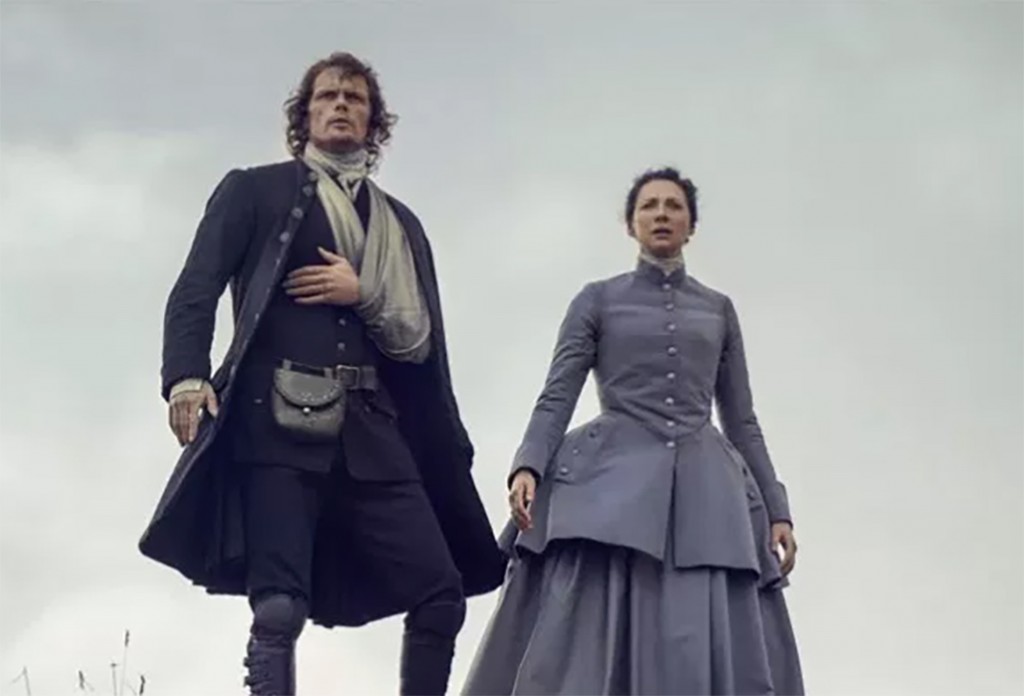 Starz Outlander Series 3 Episode 9 is all about a story told and a life lived at sea as Claire and Jamie find themselves in the ‘doldrums’; a belt of calm between the northern and southern trade winds in the Atlantic and Pacific oceans. It offers a whole new set of challenges they have never faced before.

When last, we left Jamie Fraser (Sam Heughan) and his feisty surgeon wife Claire (Caitriona Balfe), they were watching a Portuguese ship sail off with young Ian Murray (John Bell) aboard.

He had been captured from the island where he swam ashore to retrieve Jamie’s treasure on his Uncle’s behalf, as he recovered from being shot in the arm by Laoghaire (Nell Hudson) his second wife. She was very unhappy his first wife had, after twenty years turned up to rightfully claim him as her own. 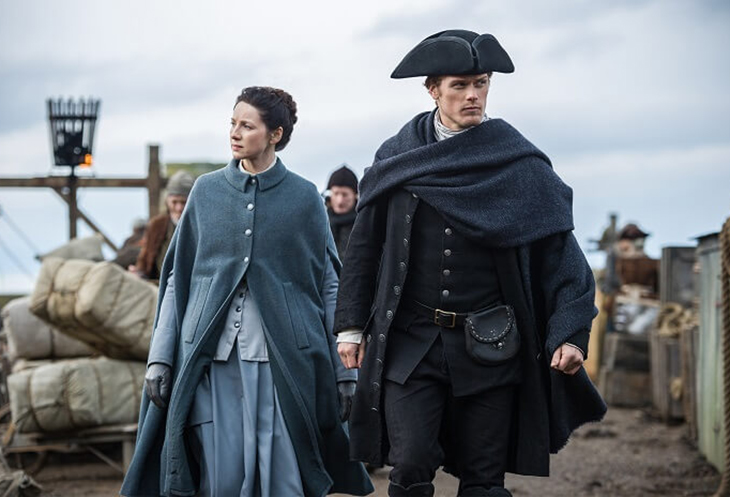 As this episode begins Claire and Jamie with his arm now out of its sling, are both standing Quay side awaiting the loading of a Brig they are to sail to Jamaica, the place where they have learned the ship bearing young Ian was headed – its home destination.

They are hoping to find young Ian alive and bring him back to Scotland because Jamie knows his sister Jenny will be furious when she discovers he has led her son once more into trouble and strife.

Women at this time in seafaring history were definitely considered back luck on ships, and there will be many superstitions for Claire and Jamie to surmount. 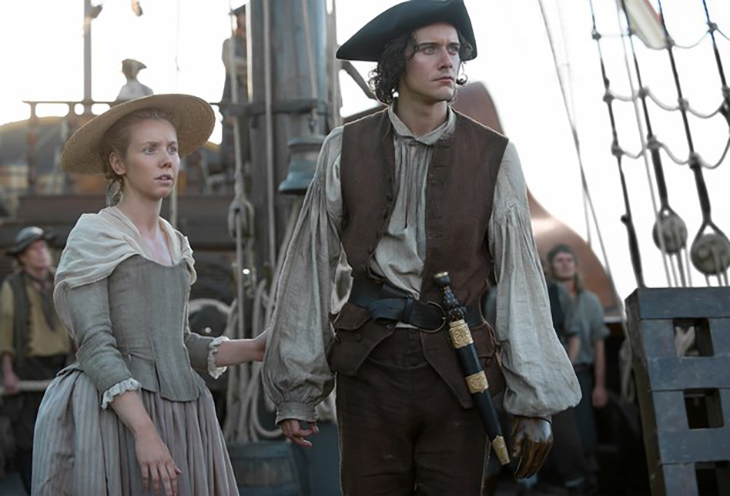 Fergus (Cesare Domboy) is on board waiting for them both and he’s about to give them a large shock, bringing Laoghaire’s eldest daughter Marsali (Lauren Lyle) along with him… they are married.

Jamie finding out he has not ‘bedded’ his wife yet is obliged to protect her virtue and demands she and Claire room together, as will he and Fergus, not a popular decision and one we know cannot last.

Jamie is seasick and has a lot to contend with as Claire is summoned to tend a wounded man and to have dinner with the Captain. Jamie and Fergus talk about love, lies and life.

Claire dines with the Captain alone and they talk about superstition. He counsels if she is to gain the men’s respect she will need to put herself into their shoes and retorts, just believing in something doesn’t make it so.

The days blend together at sea as Claire makes up medicaments and tends to the sailor’s minor injuries as ship’s surgeon. 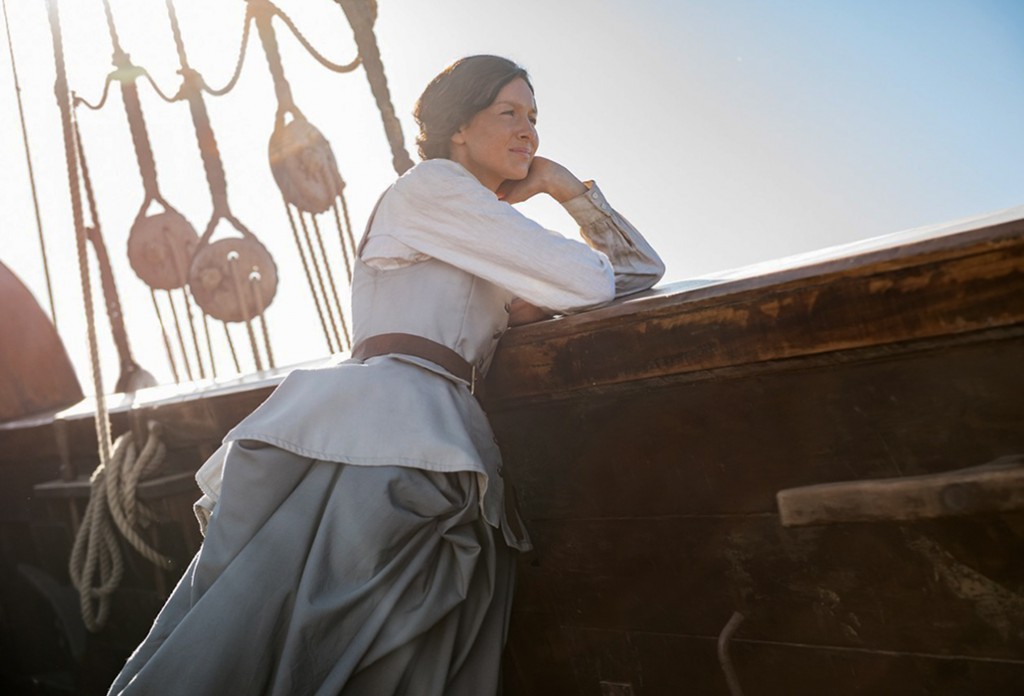 The endless horizons at sea appeal to Claire, reminding her of simpler times.

Mr Willoughby aka Yi Tien Cho (Gary Young) Jamie’s Chinese partner in his former printing business is on board and Claire observes him drawing Chinese characters on the ship’s deck and wonders what they are all about.

A story told is a life lived he tells her and she asks him to tell her his. But he holds back for once I tell it I will have to let it go he says, and I am not ready yet to do that.

After weeks at sea Claire finds him Willoughby morning secretly performing acupuncture on Jamie. So, this is what’s cured your seasickness and not my tea she scolds. Why didn’t you tell me she asks Jamie finding that he is still reluctant to share every moment of his life with her as he did in the past. 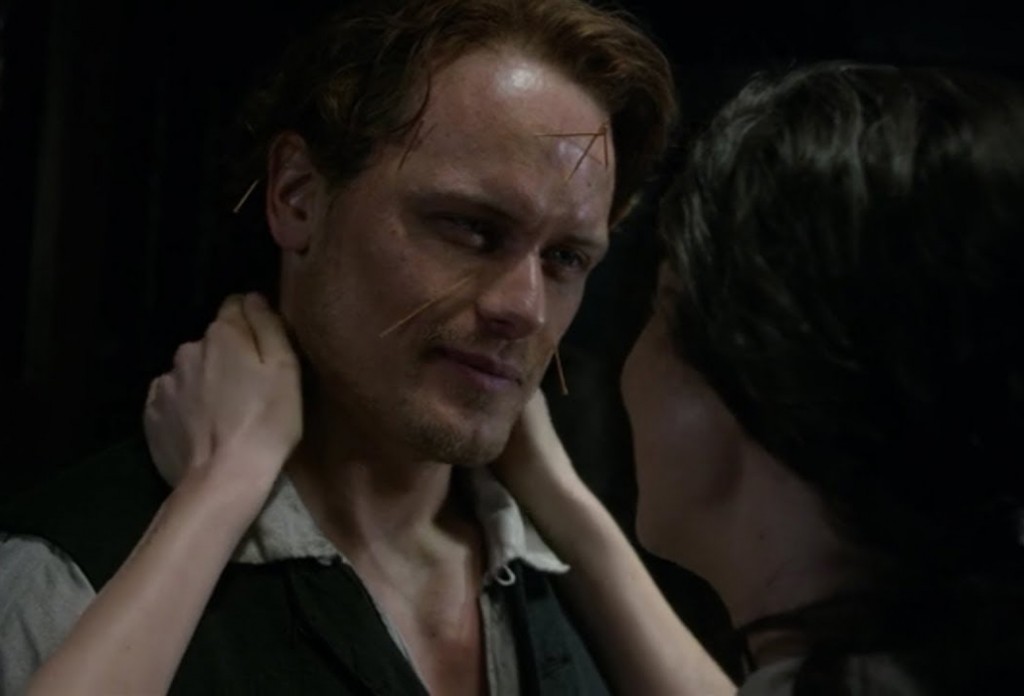 My return has been confusing and frustrating, but it is not about not loving you she tells him… and is reminded she left their daughter behind to come back into the past to find him.

While they are discussing sharing stories they realise something’s suddenly wrong. The ship has stopped moving and become becalmed…we have lost the wind observes the Captain.

It depends how long they are in the ‘doldrums’ if the men will see it as bad luck and demand a sacrifice – a Jonah. Trying not to allay fears he declares the wind will return and we must endeavour to be ready when it does.

One night looking at the moon, Claire tells Jamie about how she saw the ‘moon landing’ before she left Boston and they talk of their daughter Brianna (Sophie Skelton), and how Claire misses her. 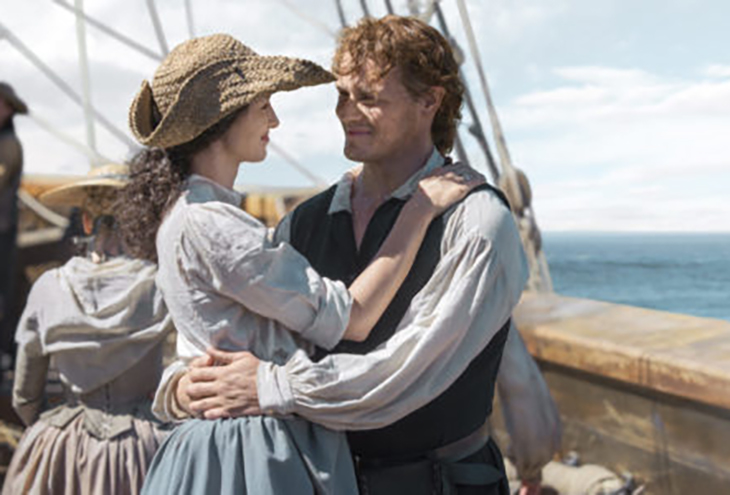 Days turn into weeks as the brig remains becalmed and by now even the most experienced sailors are indeed getting anxious. The water goes bad and now they are considering if the men will throw someone overboard to appease the ‘gods of the sea’.

One of Jamie’s men who cannot remember ‘touching the horseshoe’ when he came on board is prepare to sacrifice himself until his master rescues him.

The whole thing comes to a head one morning on deck as Mr Willoughby is observing a seabird floating low on the wind just over the sea. 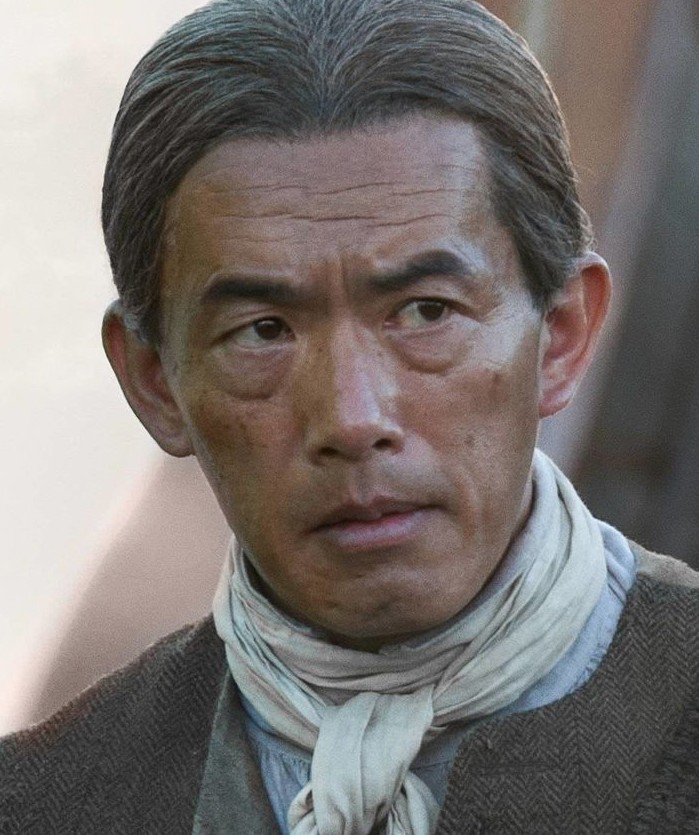 Being wise, venerable and knowledgeable, Yi Tien Cho knows it means the air is heavy and the wind about to return with a vengeance, with much rain to fill their buckets with fresh water. To keep the men at bay he tells the story of his life and how he should be a Eunuch at the court in China where he fell in love with a highborn woman and he had to flee. He strings the story out telling how he lost his honour, livelihood and country and with a dramatic flourish, throws pages of poetry overboard as the wind begins to blow.

Later after making love, Jamie tells Claire no matter what troubles happens around us Sassenach, what is between us never changes. 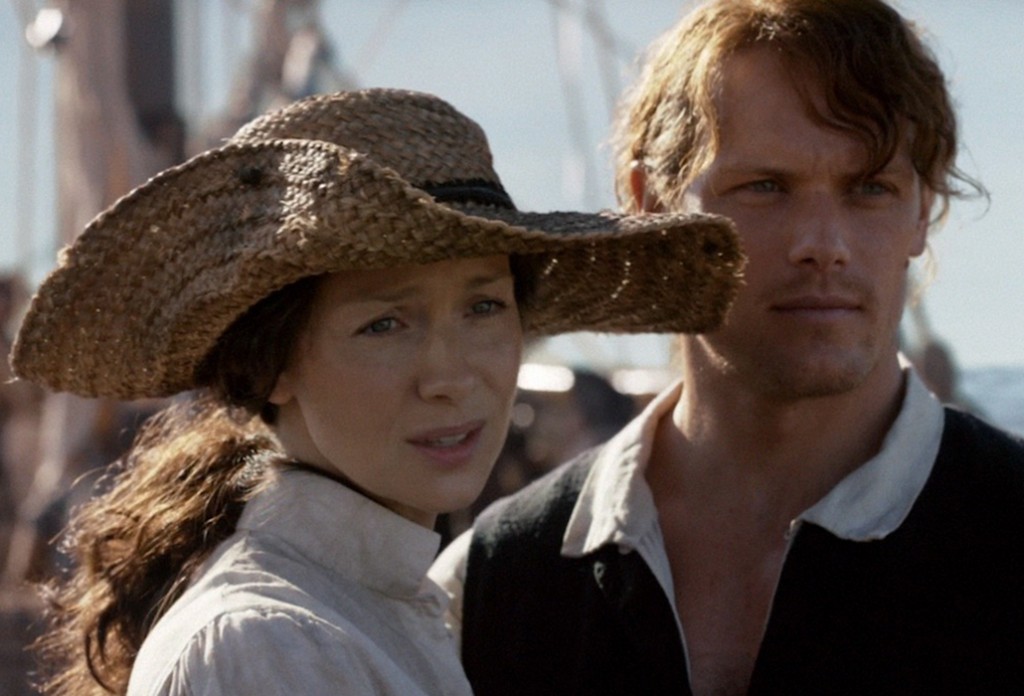 Suddenly a British man of war signals at them to heave to… and they comply. Jamie’s worried they are going to press men into service and warns Claire of what she must do I that is the case.

A very youthful Captain Thomas Leonard… who is acting Captain comes on board their Brig to report they have illness aboard their ship and are wanting to borrow the ship’s surgeon. Some 80 people are dead and the symptoms of what he describes to Claire means she understands it to be typhoid fever.

Reassuring Jamie that she cannot catch the disease, having been inoculated against it she declares as a Doctor she will have to go on board and help them surmount the illness. Reluctantly agreeing, he says they will weigh anchor and await her return.

On the British ship, it’s not a pretty sight below decks where everyone is vomiting and lying in their own waste surrounded by scurrying rats.

As she is organising the sick to be brought on deck or fresh air to help them recover she cautions the Captain it will get worse before it gets better. 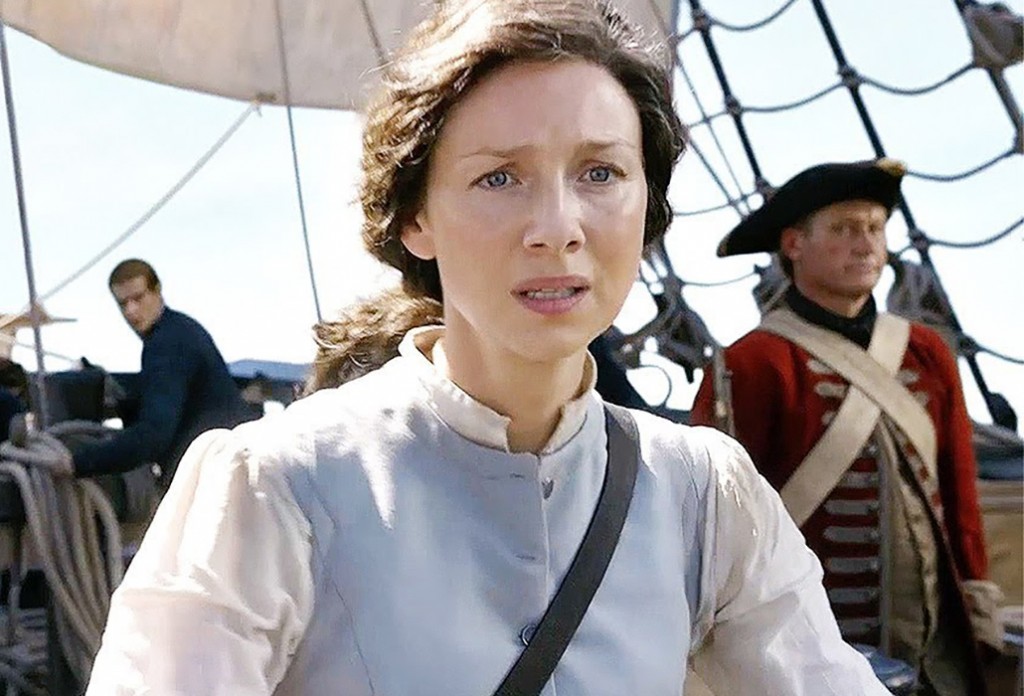 Without warning he orders his men to set sail, effectively kidnapping Claire to suit his purpose. He is on his way to Jamaica too, so he reassures her that the Brig will be not far behind. 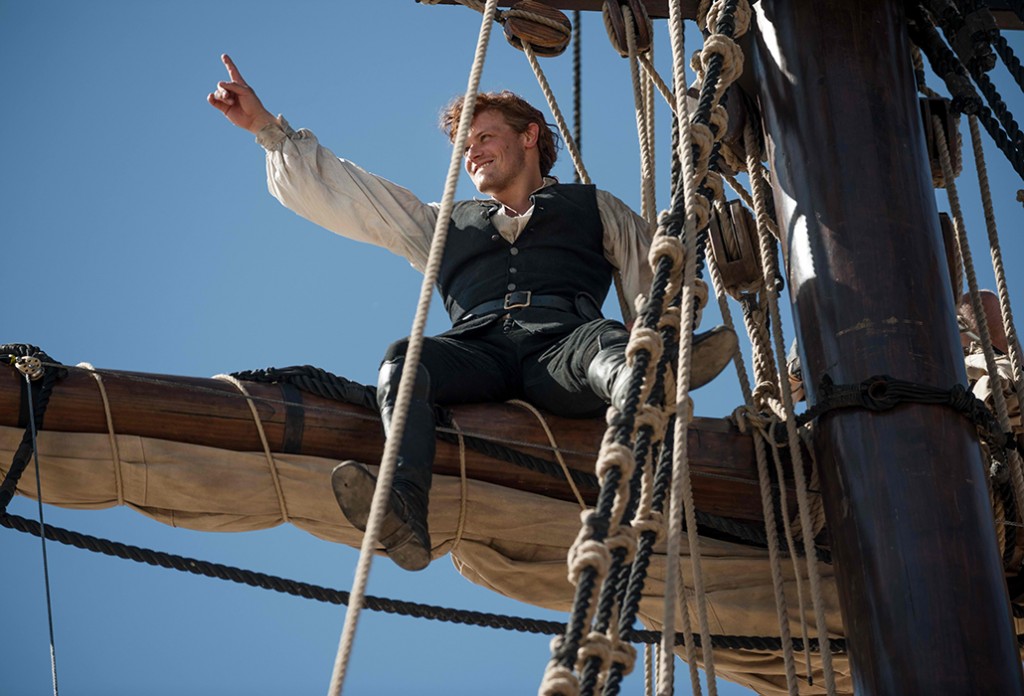 The suspense mounts as the season draws nearer to its climax with Claire only able to watch helplessly as the brig Jamie is on, disappears into the distance.