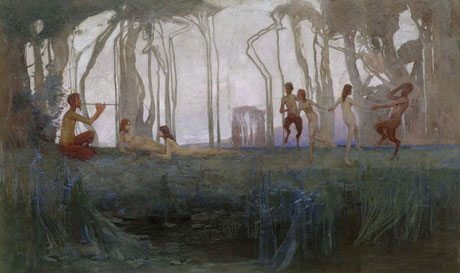 Painter Sydney Long’s Pan’ has come to embody the spirit of the land of Australia, its flora, fauna and its people a landscape that is poetic in construct, poignant in subject and passionately detailed. When  it was first completed it offered onlookers a ‘modern’ vision of the landscape, one charged with the spirit of imagination and the Australian dreamtime.

What was he doing, the great god Pan,
Down in the reeds by the river ?
Spreading ruin and scattering ban,
Splashing and paddling with hoofs of a goat,
And breaking the golden lilies afloat
With the dragon-fly on the river. Sydney Long (1871-1955) infused his works completed during his journey in life, which included periods spent in England and Europe over the course of his career, with his own vision of naturalism.

The image we receive was an extension of that very English idea of the enduring lure of Arcadia, transposed into an antipodean ideal. Instead of romping about in the hills and valleys of ancient Greece, nymphs and satyrs are embracing the myth attached to its pastoral idylls, while dancing about with great abandon in the Australian bush.

The setting is in a place where silver barked gums arch and twist in alluring shapes forming a backdrop for a dream like pond filled with water lilies and reeds that shimmer softly against the pink hazed sky of twilight. The great god Pan is sitting quietly under a tree playing his pipes producing the transforming music that always restores order and peace.

This was a new place those people caught up in the greyness of the industrial revolution could retreat to in their minds, one far away from the harsh realities of everyday life. It was, as Long himself described, a metaphor for the environment being altered through the creative process and inspired by the 1860 English poem of Elizabeth Barrett Browning  ‘A Musical Instrument’.

At the turn of the 20th century in Australia, an international, particularly a British, context was desirable as a comparative measure for Australian art. The Spirit of the plains was exhibited at the Grafton Galleries at London in an exhibition of Australian art that was held in 1898.

It was also reproduced in The Studio, the leading English art magazine of the period, during the same year. England was still regarded as ‘home’ to most Australians at this time.

Sydney Long’s ‘Pan’ was a feature of a special exhibition Sydney Long: Spirit of the Land of Australia held in the National Gallery at Canberra, Australia’s Capital city in 2012. It featured alongside works such as his The Spirit of the Plains 1897, Flamingos c1907 and The West Wind 1909.

The Spirit of the Plains emerged as Long sought to capture the ‘soul and tone of the Australian bush’ with his works that were all about the poetic notions at the heart of the international Art Nouveau style. He wanted to capture the ‘lonely and primitive feelings’ of his country and convey them to a wider European audience for whom Australia was far and remote from their everyday lives as it could possibly be. 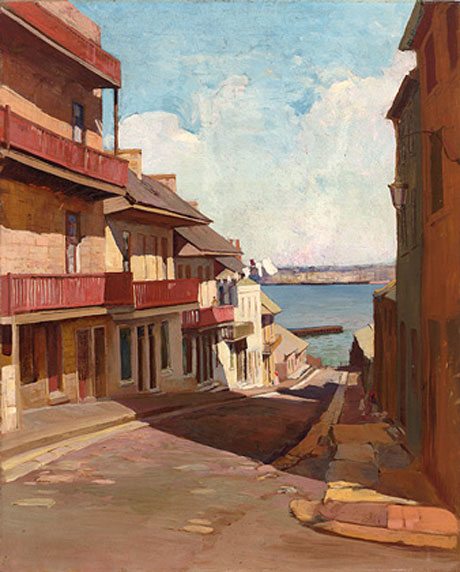 At this stage it still took months of sailing to reach this remote continent where the English had cast their convicts, far enough away for them hopefully to never have to consider it again, at least in the context of their own civilised existence. At the height of the Industrial Revolution and the power attached to Empire they still saw themselves as supreme in Europe, which was for all intents and purposes at that time anyway, was the centre of the earth.

The nineteenth century Aesthetic Movement in England inspired a whole generation of artists and artisans, musicians and architects who wanted to create beautiful and thought provoking works. In 1884 poetic botanical notions invaded the thoughts of Arthur Mackmurdo as he founded The Century Guild, producing a vocabulary of characteristics that took their inspiration from the plant world. Flowers, stems and leaves were all chosen for their curvaceous silhouettes and transposed there shapes and forms into all mediums of design and art.

A unity of art and life was a declared aim, as artists and craftsmen sought expression in variety, sharing their ideas and ideals. An entire host of artistic media became caught up in an arabesque of literature, poetry, music, fine and applied art and became part of a dizzying climate of sensual, poetic masterpieces. Tension between the senses and sexes were stimulated by plant and animal symbols that were in many ways far more eloquent than words and they became emblems of eroticism.

It was the same in France where almost all the artist-craftsmen aged around thirty years were also fuelled by an interest in the oriental taste. They founded the École de Nancy in the mid 1890’s, formulating their own common statement of beliefs. The movement is closely aligned with the style we call Art Nouveau, which was named the ‘modern’ style in England around 1890. An influential Parisian shop established by German born Siegfried Bing (1838-1905) L’Art Nouveau’ lent its name to the style, which at its best was exuberant, joyful giving form to both sensual and sinuous subjects. Kookaburras 1910 by Sydney Long © The Estate of Sydney Long. Courtesy of the Ophthalmic Research Institute.

Populating the prosaic Australian bush with creatures from mythology was paralleled at the time in the literature of Australian writers, some of whom were still struggling to make sense of their isolation from the mainstream of English life, while balancing a dichotomy, wanting to keep the secret about the magical land they actually lived in. By transposing it into scenes of ‘dreamlike dalliance’ they could boast about its beauty on the world stage while ensuring it remained a place where growth could be contained.

Free settlers who came to Australia following the arrival of the first fleet had long appreciated the uniqueness of the Australian landscape, its flora and fauna. They believed once they were here that it was more than likely the site of the original Garden of Eden and their move to it held out a promise of rebirth. Certainly after six months at sea it would have been a welcome sight, but then they found out that it was also unique and fascinating. Trees such as the Eucalyptus Pruinosa, or Silver Box, depicted by the man often referred to as the ‘Leonardo of natural history painting’ botanical artist Austrian Ferdinand Lucas Bauer (1760 – 1826) were more than exotic.

He had travelled to Australia on Matthew Flinder’s expedition as his botanical illustrator. It seemed that nature’s prodigality would always produce a supply of all that was needed to exist in paradise.

Culture had also arrived in the colonies back when Governor Macquarie was enjoying his term from December 1809 – 1822 and from then on it had developed its own special idiosyncrasies and eccentricities.

While the theories of English gardeners such as landscape stylist Capability Brown were known and respected, they were seldom put into practice in the average city quarter acre allotment. Instead it was in the sanctuary of the Blue Mountains that the vogue for spending mid summer in the beauty of a cool retreat was realised between 1870 and 1915.

Hill stations provided a place of solace from the city summer heat and as they developed there was a conscious attempt to naturalize the lush Australian landscape and bring about a cohesiveness and unity between Australian native plants and exotics. It was all about providing a sense of abundance indicative of living in such a ‘lucky country’.

It was also about holding fast to a notation that nature itself always holds the key to inspiration. The pastoral idyll provided a direct and vital link between the landscape and the built forms it inspired, an idea which goes back to ancient times when architects did not consider placing a temple to the gods in the landscape without consulting a genius loci to approve their choice of site.

The nineteenth century Aesthetic Movement in England inspired a whole generation of artists and artisans, musicians and architects who wanted to create beautiful and thought provoking works. In 1884 poetic botanical notions invaded the thoughts of Arthur Mackmurdo as he founded The Century Guild, producing a vocabulary of characteristics that took their inspiration from the plant world.

Flowers, stems and leaves were all chosen for their curvaceous silhouettes and transposed there shapes and forms into all mediums of design and art. A unity of art and life was a declared aim, as artists and craftsmen sought expression in variety, sharing their ideas and ideals.

An entire host of artistic media became caught up in an arabesque of literature, poetry, music, fine and applied art and became part of a dizzying climate of sensual, poetic masterpieces. Tension between the senses and sexes were stimulated by plant and animal symbols that were in many ways far more eloquent than words and they became emblems of eroticism. Flamingos c.1907 oil on canvas 30.6 h x 61.0 w cm acquired with the assistance of the Masterpieces for the Nation Fund 2006 Accession No: NGA 2006.2 Reproduced with the kind permission of the Ophthalmic Research Institute of Australia.

A small example of Long’s many flamingo paintings, the Flamingo’s on show are frozen in time in a frieze of the sensually flowing lines characteristic of the art nouveau style. Their sinuous long necks curve graciously silhouetted as they are against his backdrop of stylized trees.

The colours too are powerful, soft pinks and greys with a dash of ochre in the foreground where the sun bounces of the reeds before dissipating into the soft glow of the sky. It was first exhibited in 1907. 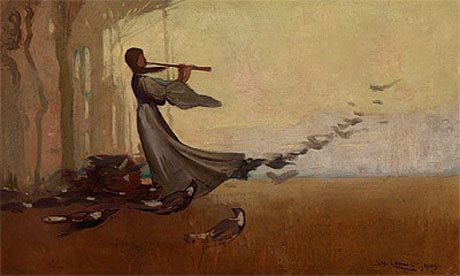 The West Wind 1909 is depicted as a spirit, playing her pipe to entice the magpies nearby to fly off on her long hot breath. The sky is filled with an eerie light, full of the detritus that is blown up by such a hot wind as it comes barreling in from the dry, red-brown Australian desert, where the fates can be cruel to even the most well equipped of travelers.

The Spirit is absorbed in her task, her billowing sleeves and skirt carrying us along as we imagine the west wind’s impact on our lives and as a companion to our wanderings spreading our thoughts and ideas across the great wide-brown southern land, Australia.

What a wonderful way to celebrate Spring and Summer in New York, telling the story about the role parks and gardens have played in the evolution of modern life