Painting Paradise: The Art of the Garden an exhibition by The Royal Collection Trust is bringing together paintings, botanical studies, drawings, books, manuscripts and decorative arts is devoted to ideas about the ‘idealized garden’ from the sixteenth to the twentieth century.

The show will be at the Queen’s Gallery, Buckingham Palace at London from 20th March to 11th October 2015.

Excitedly the works on display will include early depictions of gardens and plants by such luminaries as Leonardo da Vinci, whose botanical drawings are not only unique but also very rare.

In Italy Leonardo da Vinci (1452-1519) during his lifetime combined his analytical perception of the natural world with the aesthetic sensibility of an artist. Da Vinci’s botanical studies are that of a master in touch with their reality and

Stories about the first man and woman Adam and Eve are some of the earliest attempts to rationally explain ’man’s existence on earth. Adam and Eve in the Garden of Eden, a stunning painting in The Royal Collection by Flemish artist Jan Brueghel the Elder rendered in 1615, introduces ideas of abundance. He relegates the main protagonists and the now famous Tree of Knowledge to the middle distance in an abundant woodland landscape. It is a setting equally rich in both flora and fauna – a paradise on earth.

Court painter to the Habsburg Archdukes Albert and Isabella, Breughel was able to study botanical specimens in the palace garden at Brussels.

The Garden of Eden was a paradise and represented a place of delight and pleasure. The Tree of Knowledge in the garden, is thought to represent man’s capacity for rational, ethical and moral judgment.

The philosophy of this period embraced a love of nature, believing natural products were created for the use of many and that that usefulness was implicit in a delight in flowers and gardens. This interest was also fuelled by a desire to understand the medicinal qualities of plants, to combat more fully the many diseases plaguing humankind at that time.

The wonderful work Pleasure Garden with a Maze by Lodewijk Toeput (Pozzoserrato), c.1579–84 depicts a water labyrinth, which is the artist’s invention, inspired by contemporary descriptions of 16th-century Italian formal gardens.

The labyrinth is a powerful symbol, a complex pattern of great meaning, and an ancient symbol relating to spiritual wholeness, which took shape millennia ago.

A labyrinth wasn’t designed to confuse, it was all about going on a journey along its pathway to find a way into your inner self, or the soul, through contemplative meditation. Blackberry from the 6th century – An illustration from Pedanius Dioscorides original De Materia Medica manuscript, which was influential throughout the Middle Ages in Europe

All the cultures on earth have understood since time immemorial that a labyrinth was a method of finding the right pathway in life, one leading to truth, fulfilment and for many, and enlightenment.

The intellectual and theological movements encompassing the 16th and 17th centuries in Europe and England and parts of the world colonized by predominantly Roman Catholic countries were very influential.

This period saw the birth of botanical illustration, flower books and still life painting. The Jesuits, members of the Society of Jesus were an order of religious men belonging to the Roman Catholic faith and a leading force in the community through education, missionary and charitable works.

Flowers were said to contain hidden messages for the attentive observer, one they could interpret. A humble soul could draw a moral lesson from every rose, peony or columbine, while the rose exuded the sweet perfume of virtue.

The blue hyacinth encouraged meditation on God and Heaven while the Crown Imperial, that majestic of all the flowers that especially appear in Dutch still life paintings, reminding us of the futility of human power.

While the blackberry grew wild, it was both edible and medicinal. They were also meant to give protection against evil,  if gathered at the right time of the moon.

During the 16th century, gardens remained as a precinct of the wealthy, symbols of status and intent.

Henry VIII’s Great Garden at Whitehall Palace was recorded in the background of the famous painting The Family of Henry VIII, c.1545. It is the first real garden recorded in British art at a time when gardens were being employed as an integral aspect of royal propaganda.

The wealth of a garden’s owner was demonstrated by producing elaborate horticultural features such as obelisks, pergolas, knot designs, fountains and topiary.

It was King Henry VIII (1491-1547) who first imported Italian workers into England to work on royal residences.

With them came the ideas of the Italian Renaissance and its formal gardens.

From then on aristocratic gardens on a previously unimaginable scale in Europe and England, were almost all inspired by the intense rivalry between the French and English kings.

At the Chateau at Versailles in France long, straight avenues reach into infinity and the parterres were designed to be in perfect symmetry. The exhibition will include a panoramic view by Jean-Baptiste Martin of the French king’s gardens at Versailles, c.1700, There will also be A View of Hampton Court, by Leonard Knyff, c.1702–14, the greatest, which is a surviving Baroque painting of an English garden, clearly echoing many of the ideas established by Louis XIV’s great gardener Andre Le Notre (1613-1700), including highlighting avenues of radiating trees.

They had a predictable balance of composition, one that was meant to be a visible demonstration of God’s pact with the King and the destiny of the state, eloquently expressed through the formula of architecture and gardens that compliment each other. Historic Hatfield, the house and garden, where Elizabeth I spent much of her childhood. 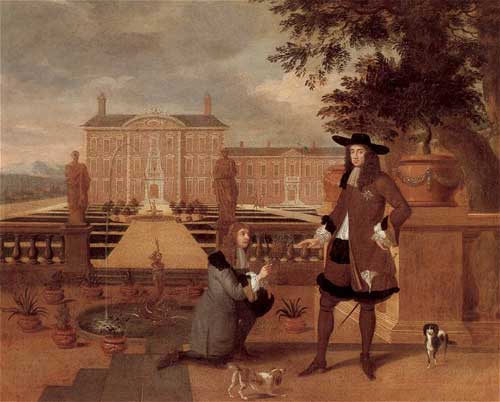 Charles II (1630-1685) particularly admired the gardens of France, where he spent a great deal of his time in exile from the English court.

Le Notre’s formalised gardens with their planned avenues and walks radiating to the outer edge of the city were fresh in his mind when he was restored to the English throne.

During Charles II’s reign the formal garden, where the aim was to subdue nature by art, was brought to its apotheosis in England.

Set on an axis with elaborate fountains and waterworks it was created to dazzle, divert and amuse.

The most important period at Hampton Court however would be when William III arrived after 1689, importing the new combined French Dutch style of intricate box scrolled parterres, which were designed by French Huguenot Daniel Marot.

Yew trees were trimmed as obelisks and ‘white hollies’ edged the garden beds. Our engraving of the layout of the garden at Hampton Court reveals the garden around 1690, drawn by Leonard Knyff, engraved by Johannes Kip, it was of the garden as designed by Daniel Marot for King William III. It would be fair to say however, that the English garden at this time was not Italian, Dutch, French or really English either, but a chaotic conglomerate of them all.

The yew tree had long been associated with wisdom and is one of the oldest living inhabitants of Europe. Some have been standing in England for over a thousand years.

Those Yews retained and still standing at Hampton Court are today more than impressive. Diarist John Evelyn (1620-1706) who moved in illustrious cicrles, was the man who acquainted English readers with the Italian and French contemporary garden design philosophy, influencing the taste of the whole nation.

He recorded fashionable house parties where you could watch a river being made more navigable or, a fen being drained, because at this time most of the countryside of England was still relatively wild.

To be continued Painting Paradise: Art of the Garden – Royal Collection Pt 3