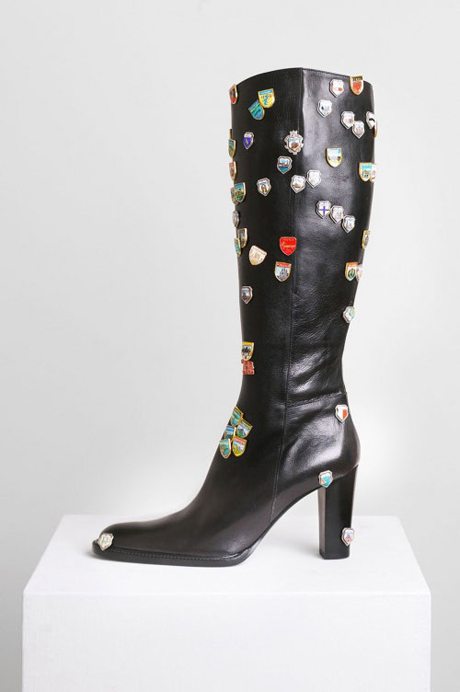 Paolo Pivi Italian 2001, do you know why Italy is shaped like a boot? ...because so much shit couldn't fit in a shoe, 200, leather boot 50 pins courtesy artist

Do you know why Italy is shaped like a boot?

She turned her idea into a realist statement in 2001 in an exhibition “Italics: Italian Art Between Tradition and Revolution 1968-2008 – showcasing an Italian leather boot

Interviewed at the time she was asked to what extent did she consider herself to be an Italian artist? She answered, “I am proud of being Italian. When I was younger, I was ashamed of being Italian, and now I’m proud”

What changed your mind the interviewer enquired? Her answer: Getting old

Art reflects contemporary societies attitudes and philosophies, fashions and passions and social and moral mores…but what about having fun with art?

What is it that tickles people fancy today?

Well the National Gallery of Victoria (NGV), the institution leading the way in arts and cultural development in Australia under the able directorship of Tony Elwood, is proving once again that it embraces that humour certainly has a place within its hallowed walls.

From 28th May to the 31st August, a sensational ‘sleuth of giant, fluorescent and feathered free-spirited polar bears will greet visitors to the Federation Court of the NGV International this winter, in a major suite of new sculptural works by the Italian artist Paolo Pivi (b.1971-) Paolo Pavi Italian 1971 It’s not fair 2013 (detail) from OK, you are better than me, so what? courtesy artist and Galerie Perrotin. NGV International Supported by Loti & Victor Smorgon Fund Photo by Guillaume Ziccarelli

This is an installation that is sure to please and delight people of all ages and from all cultural backgrounds. It won’t fail to put a smile on everyone’s dial.

These ‘flamboyant figures’ are sculpted first from foam and then adorned with neon-coloured “Turkey” feathers. They will be posing and posturing in the foyer as they compete to capture everyone’s attention.

As one bear leaps from a balcony, others will be indulging in philosophical and intellectual conversation as good bears do.

Yet others will be throwing their legs in the air in an attitude of carefree abandonment, and while they are having a great deal of fun so will everyone else.

The figures all have a distinct personality and unique body language and together they create a scene that taps into our creative imagination. They will provide memorable mesmerizing moments so that we can all enjoy a sprinkling of magic dust from the wand of a master of creativity.

A multi-media artist of renown Paolo Pivi was born in Milan and has been living and worked at Anchorage in Alaska until recent years, although is now working in India due to family commitments. In 1999, Paolo Pivi was awarded the Golden Lion Award for the Best National Pavilion (together with 4 other artists) at the Venice Biennale.

For Pivi animals are like beautiful characters or in the Italian tradition, divas and the text that accompanies each is a series of quirky short statements that everyone will enjoy.

She is quoted as saying that “I do believe in change. Changing of one’s thoughts is the utmost example of progress and evolution”. Although she does realise that it is ‘hard for people to change the way they think’.

When she moved to Alaska it attracted her because it excited, entertained and intrigued her and, she wanted to embrace a new experience and live a better life.

Not renowned as a centre for art or artists, nevertheless its presence and persona soon invaded her psyche and her work. At one stage she used to live on the tiny island of Alicudi in Sicily another centre certainly outside the art circles where there was only 62 people and two ostriches.

Despite them being ‘incongruous’ she noted that ‘the fact that they were there held such significance’. Photographed standing in a boat by Pavi, because they were ‘prima donnas without vanity’, the ostrich’s gaining considerable notoriety. Her work has always attracted interest because she does the unexpected. In Salzburg in 2006 she posed a helicopter upside down in a public square and the people of the city just loved it and ‘went nuts about it’.

In an interview recently for the American artreview Paolo Pivi revealed that while ”…talking with my friend, the Inupiaq performance artist Allison Warden a.k.a. aku-matu, he told me that every human being has a memory of a past when we were very closely connected with animals. Right then and there, I understood myself”. 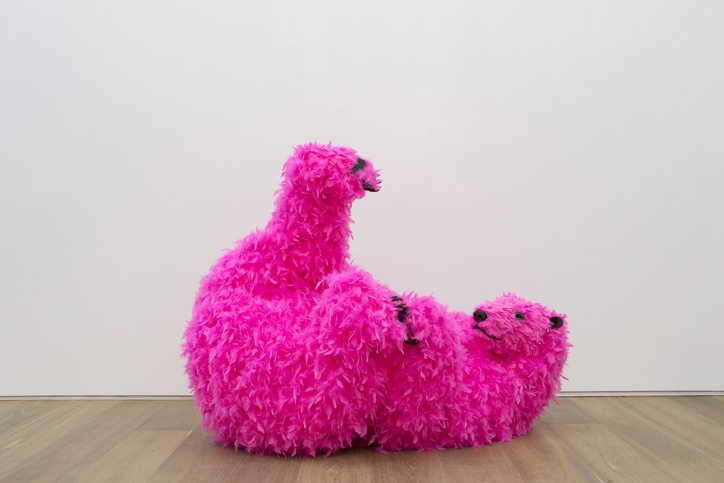 Paolo Pivi Italian 1971 - Mama no more diapers, please 2013 from Ok, you are better than me, so what? courtesy Galerie Perrotin, NGV International

This stunning installation at the NGV is certainly about playfulness, displaying Paolo Pivi’s interest in images that stimulate and inspire the imagination.

It’s all about us all holding a deep concern for the natural world and the vulnerability of animals that inhabit our remaining wilderness areas, especially in the face of the advancement of humanity and the changes in climate that are occurring on a faster time scale than ever before. Paolo Pivi Italian 1971 - Who told you white men can jump? 2013 from Ok, you are better than me, so what? courtesy artist and Galerie Perrotin, NGV International supported by Loti and Victor Smorgun Fund Photo by Guillaume Ziccarelli

Tony Ellwood, Director, NGV, said: “Federation Court will surprise and delight visitors this winter with the whimsical sculptures of Paola Pivi. As an adjunct to our Melbourne Winter Masterpieces exhibition, Italian Masterpieces from Spain’s Royal Court, Museo del Prado, it provides an opportunity for visitors to view a broad selection of Italian art from the traditional to the contemporary.” The exhibition is the latest installment of a series of commissions by leading international artists for the Federation Court at the NGV International.

The installation by Paolo Pivi is generously supported by the Loti & Victor Smorgon Fund. The NGV also acknowledges the support of Michael Buxton

Have you always wanted to sing? Do you crave to give a ‘live performance, where do you start? Opera Queensland has developed a program they call ‘Open Stage’