Liz Shreeve was a finalist recently in the internationally recognised competition, The Woollahra Small Sculpture Prize.

Sculptures were viewed at the picturesque location of the Woollahra Council Chambers, an ambient harbour side setting at Double Bay in Sydney.

Liz Shreeve’s Sculpture Swirl 2 was shaped from torn and curled paper on constructed paper form and it sat contentedly on a shallow wooden plinth.

Patience and precision were expertly delivered in the many hundreds of pieces of squared paper curled to create her sculpture.

The geometrically constructed sculpture had spherical layers of curled paper, swirls and folds that directed energy into the growing organism.

Images of a single cell revolving and evolving, renewing life and filtering light were strong forces that connected with me. As I moved around the sculpture a coral creation emitted life. I felt the delicate lace patterns formed a purity of conception that required wisdom and reflection from its creator.

Recently I interviewed Liz Shreeve to learn more about her art and I am delighted to share her thoughts about her work. What has inspired your work?

It’s something I can lose sight of when I’m working on a series but the original inspiration comes from my environment.

It doesn’t have to be nature. I was born in the UK and migrated to Australia when I was nine and was blown away by the intensity of the light here.

I went back to the UK for 12 years and suffered from SAD every winter so I think I’m a bit light dependent.

My interest and inspiration just comes from the way light hits and colours surfaces, especially those of urban architecture.

I have strong visual memories of seeing light as a cloud, like when dust motes are dancing in the slatted light from venetian blinds.

When I was at art school I wanted to paint that feel of light but couldn’t.  I made models in white card of the objects I was trying to paint so it was more immediate.

When I did that I realised that I didn’t need to paint the light, just catch it.  What a relief! 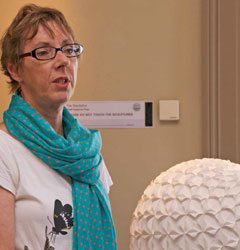 How does your creative process begin and proceed as you work?

It can begin in different ways but mostly it is something I’ve seen.  One series was triggered by seeing stacks of scaffolding planks with a patina of different colours from past paint jobs.

Another series, (Light Grid and Regular Square were part of that) was from seeing the windows in a high rise change colour through the day.  The way light draws out the pattern of white wool in Aran knitting is another or the change in colour of a painted wall because of its angled surfaces.

Once I’ve settled on a unit, like a log, a flip flap or a curl (I’ve only used one type at a time so far) it’s about how those single units can pack together to catch and colour light. I do rough drawings on graph paper to imagine what will happen, but it’s only when it is finished that I know if it works or not.

Have you always been drawn to or influenced by mathematical concepts? When I was at art school until the final year and Kempsey TAFE before that, I worked very figuratively. But when I look back through my visual diaries the stuff I did just playing around and that I didn’t show anyone was all geometry and pattern.

There are only so many ways you can order things.  But if you add in colour and shape, the possibilities are endless.  I always wanted to work on a 3D surface and eventually worked out how to do it.  It was when the shape interacted with the surface pattern that I really started thinking about numbers.

The two things together generated objects that referenced organic structures like seed pods, viruses etc.  I have a background in science, mostly biology and chemistry, and recognised those forms.  It was as if the works made themselves.

I could see that there was some serious maths involved but my maths knowledge is limited so I applied to Culture at Work for a residency to work with a mathematician.

I met Leon Poladian, Associate Professor of Applied Maths at Sydney Uni.  Leon is helping me see the relationships between numbers and pattern.  We have a joint blog; www.shapingcolour.wordpress.com and have been recording some of our thoughts as the work progresses.

The 3D works had to be put on hold while I prepared for the show because they take so long to make. 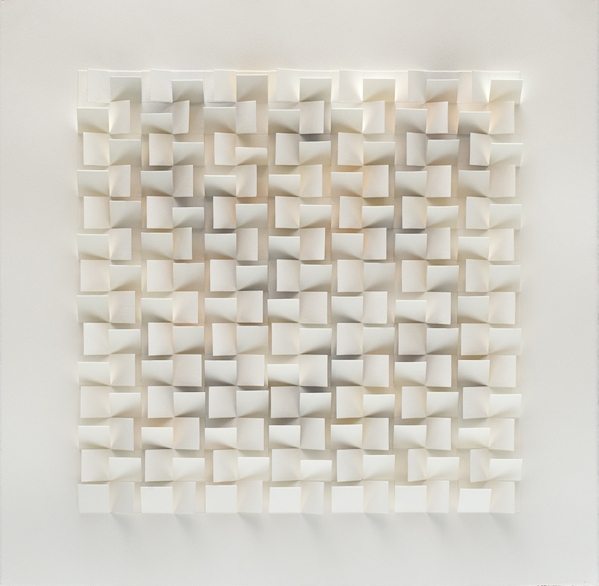 What artists have influenced you?

As a child, I loved the Impressionists and remember cutting out a picture from the Woman’s Weekly of one of Monet’s paintings of the sun through fog on the Thames.  Elsworth Kelly and Ben Nicholson have also inspired pieces.  I’m in awe of the works of James Turrell.  I like Bridget Riley’s immersive pieces.  I also love the work of Carlos Cruz-Diez and the South American geometric artists.  When I discovered them I realised that it was OK to work this way.  Very encouraging!

Why are you so attracted to working with paper?

A paint brush is too far removed from what you’re making.  I like the immediacy and tactility of paper.  It’s also quiet. I have worked in wood but I hate the noise of power tools.  But even so, I still feel that the paper works are maquettes for scaled up wall installations in metal or some other material.  In huge skyscraper foyers or on the sides of buildings!

But someone else can manufacture them. Liz has shaped a poetic life into the form, light, shadows and colour that pervade the gentle artworks she has so deftly crafted with integrity and philosophical intent.

Fabulous fun to be had for eleven days by kids of all ages with the Kids Summer Festival at NGV International & NGV Australia from the 16 – 26 of January, 2016