It was Greek philosopher Aristotle (384-322) four centuries before the birth of Jesus who said ‘the aim of art is to represent not the outward appearance of things, but their inward significance’. Since then art has always concerned itself with the natural and supernatural, the real and unreal, the seen and unseen, the past, the present and future, the transient and the eternal. In all ancient cultures rays or beams of light with, or without colour challenged attention; the symbolical use of light in any form denoted both high dignity and power. From St John’s Cathedral at Brisbane comes the news about an artist, who exhibited in a ‘world poverty ‘ exhibition in 2010. Kathryn Brimblecombe-Fox has been instrumental in making a connection for the Cathedral that results in that amazing space being set up with the latest in hanging systems and energy efficient lighting so it can host all types of exhibitions and events into the future.

While purpose built galleries are mostly used for fine art exhibitions, exhibiting in a great Cathedral is an enticing option for those whose works are inspired by spiritual concerns. Cathedrals are a purpose built sacred space that offers every one an opportunity to explore their inner self, which is what works of art are all about especially those of the artist in question.

Kathryn Brimblecome-Fox’s PARADISE Exhibition will be running from the 8th September 2011 until 8th October (someone’s superstitious) at the Purgatory Artspace in North Melbourne, Victoria. 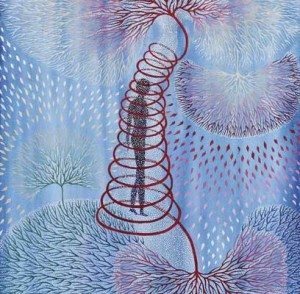 What it seems Kathryn is seeking and wanting to help us all to find is true inner light. Like the use of a crown, light in an art work characterizes and differentiates it, as well as distinguishes and exalts it. It is about the triumph of light over chthonic deities of darkness. Kathryn is wanting to reveal the intangibles that so often occlude the truth about light and life.

An international artist of renown Kathryn Brimblecombe-Fox has exhibited at London, Dubai, Abu Dhabi and Seoul as well as regularly here in Australia. She has a BA in art history from the University of Queensland and lives in Queensland. In her work Kathryn explores God’s creative colour possibilities. She says on her website ‘I am interested in the space between the macro and micro and the different perspectives this space affords us, if we are game to step outside ourselves…

…by playing with the distance [close or far] we can ‘see’ the world and ourselves from these different perspectives…even possibly simultaneously. New insights evoke compassion for ourselves and others. Indeed, in an increasingly globalised world, compassion is imperative.’

During the middle ages an aim of the Church was to reflect the glory of heaven, as a foretaste of better things to come. It sought to reflect the mystery of God, an expression on earth if you like, of the heavenly banquet one on offer to everyone.

It was in the late Renaissance period Michelangelo Merisi da Caravaggio ( 1573-1610) became a master of light in painting. He used it in a new and exciting way, but always in regard to reverence and respect for the meaning of light. He invented complex systems of illumination whose source was always out of view

In ancient times the so-called paradise gardens of the East were also designed to emphasize the meeting of heaven and earth and to highlight the contrast between the two separate worlds; the outer one where nature remains in awe inspiring control and the inner one, artificially created as a sanctuary, a place of peace and ease.

Kathryn calls on her historical knowledge to weave her own threads of destiny in her relentless search for her Paradise. It’s all about multiplicity of images as a reflection of that so-called inner paradise, which exists within us all. She says about her exhibition

“Paradise explores three interweaving aspects of paradise; seminal notions through the story of Adam and Eve, paradise lost through intercultural misunderstanding and environmental degradation, and ideas of paradise in cosmological postulations of multiple universes ‘out there’ which hint, like a fleeting mirror, of the vast paradises within”.

There is a book For Everyone by Kathryn Brimblecombe-Fox to follow later in the year.

Video of the Exhibition to Watch

Images: Paradise, Finding Light and Infinity all used with kind permission of the artist

Shenzo and Gerard Mapstone are masters of music, who invite everyone to enter their exciting world of creation, improvisation and connection to ravishing sounds