Many know about Salem in Massachusetts in America, mainly because of its association with witches. However one of its greatest treasures is the Peabody Essex Museum (PEM). The roots of the museum date to 1799 and the founding of the East India Marine Society, an organization of Salem captains and supercargoes, who had achieved what once was impossible, sailing beyond either the Cape of Good Hope or Cape Horn.

The society’s charter included a provision for the establishment of a “cabinet of natural and artificial curiosities,” which is what we today would call a museum.

In 2012 PEM had a show that revealed the contents of the Emperor’s Qianlong’s private retreat deep within the Forbidden City. There were some ninety objects, including murals, paintings, wall coverings, furniture, architectural elements, jades and cloisonné.

The Emperor Qianlong  (r.1736-1796) was one of Chinese history’s most influential figures. He was among the richest and most powerful men in the world during his life time. A connoisseur, scholar and devout Buddhist, within the forbidden city Qianlong created a luxurious garden compound to serve throughout his retirement as a secluded place of contemplation, repose and entertainment. 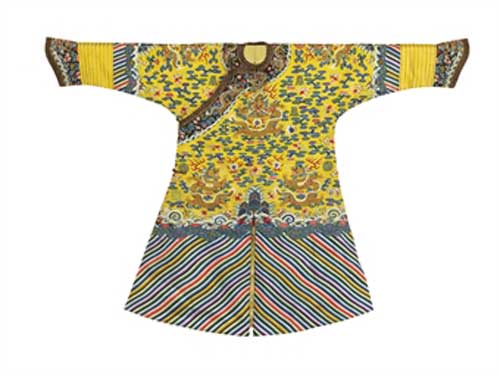 I first learned about the PEM in an unlikely place, Brisbane, Australia during the last year of the twentieth century. At Milton in Brisbane, where I was working at the time in an Antique Shop, we held an exhibition of Chinese textiles and many people came not only to look and purchase rare pieces, but also to show us theirs.

One family turned up with a sea chest full of fabulous textiles and objects, which had been brought out of China early in the twentieth century at the time of the Chinese Revolution by a merchant sailor member of their family.

It included a fabulous uncut Chinese silk Imperial Yellow Robe, which was still on the roll where it had been placed after it had been woven. 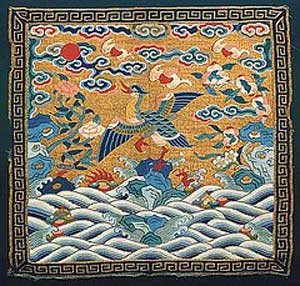 Chinese Rank Badge of a Scholar

An elderly friend, Jim Forbes came to visit and advise. Jim was a member of the renowned American Forbes family, whose wealth had its origins in the China trade that took place between North America and China during the nineteenth century.

He had an innate understanding of the culture that surrounded the Emperors in the Forbidden City. Throughout the exhibition he often called in to view and talk about the textiles and the time they had been woven.

They paid for it by exporting to China, from Boston, large quantities of silver, furs, manufactured goods, cloth, wood and the deadly opium along with any other items they thought the Chinese market would absorb.

The Forbes family founded and were involved in the running of the Museum of the American China Trade at Milton, Mass., on Boston’s South Shore.

Until the 1980’s it was curated by a Forbes great-grandson, Dr. H. A. Crosby Forbes, who was an expert on Chinese porcelain and a relative of our Brisbane based expert. 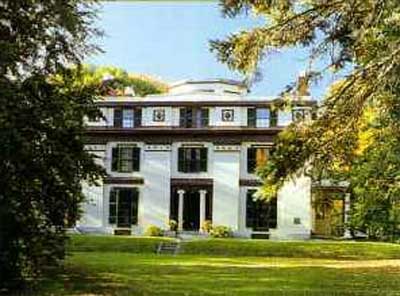 He often went to visit him to discuss special finds and view the family collection.

It was housed in one of the family members 1833 Greek Revival style house in ironically, Milton in Mass.

The PEM is about helping people to access and assess their relationship to creativity, or to help refine their ability to interpret art and culture. The collection is diverse and cross cultural and includes African, American, Asian, maritime, Native American and Oceanic art.

The focus is on enjoying a lively conversation through creativity across time, place and culture.

Their goal is not to hang art on the walls and then tell you what to think. Deep and far ranging, the collection is meant to open windows onto the world and other cultures to learn how people live, work and celebrate.