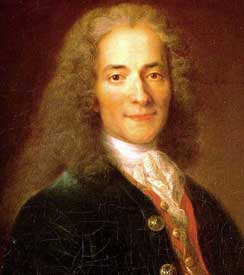 During the eighteenth century at the Court at London the King was not treated as someone divine, but as a human being. Noted French author Francois Marie Arouet de Voltaire (1694 – 1778), after a short spell in the foreboding French prison the Bastille for challenging a nobleman, lived in England from 1726 to 1729. He was flabbergasted by their freedoms, found it amazing Englishmen could say or publish what they liked without fear of prison or exile, and that different religions flourished. In France it was the rich who were exempt from taxes whereas in England it was the poor. Voltaire had to be persuaded there was no torture or arbitrary imprisonment for lawbreakers and that liberty and justice was everyone’s expectation. Although he died before the revolution Voltaire‘s experiences became part of the wider expertise that he gained and his works and ideas became the embodiment of European ‘enlightenment’.

Play our interactive Quiz; find out how much you know about Chairs, which historically from Rome to Renaissance, Baroque to Bauhaus are about more than seating