“In your hands, my dissatisfied fellow-countrymen, and not in mine, is the momentous issue of civil war. The Government will not assail you. You can have no conflict without being yourselves the aggressors. You have no oath registered in heaven to destroy the Government, while I shall have the most solemn one to ‘preserve, protect, and defend it’.” * The landmark exhibition Photography and the American Civil War (1861 – 1865) opens on April 2 at one of the world’s greatest institutions The Metropolitan Museum of Art, New York.  More than 200 of the finest and most poignant and heart rendering photographs of this bloody conflict will be on display, drawn from the Metropolitan’s own considerable holdings and complemented by exceptional loans from public and private collections.

This is not a pretty show, but a vital one. The complexities and conundrum of the American Civil War that raged between its states are way beyond the scope of this post. What this is about is the show, that will reflect and record for us all to consider a watershed moment in time when 750,000 lives were lost as the new American nation became involved in a bloody internal conflict as it attempted to grow a ‘united’ vision of itself.

Ongoing enlightenment during the nineteenth century it seems, had a very high price to pay.

Thomas Campbell, Director and CEO of The Metropolitan Museum of Art, commented:

“During the Civil War years, the medium of photography matured and flourished in surprising and unexpected ways, and what survives from the period is a rich visual legacy of stunning complexity. The tragic beauty and profundity of the photographs have been a touchstone for generations of artists from Walker Evans in the 1930s to today.” During the Civil War brother fought brother and whole families were destroyed by the specialized equipment of 19th century warfare.

This show will pull no punches as it lays bare, through the early days of photography, scenes that will more than likely shock many people to their core.  It is about making sure that cannot ever become complacent about the futility of war and the horrors it inflicts.

The camera, still in its own infancy of development, recorded from beginning to end the heartbreaking narrative of the epic four-year war as families and whole communities of people were torn apart by also playing a blame game, fueled by a very real loss of faith, hope and trust.

The corruption and devaluing of society turned its moral and social mores and values upside down and the healing process afterwards would take a long time. It was a war waged under a whole new set of ideas and principles, not the least the value attached to society and its mental strength, good health and wellbeing.

“We are not enemies, but friends. We must not be enemies. Though passion may have strained it must not break our bonds of affection. The mystic chords of memory, stretching from every battlefield and patriot grave to every living heart and hearthstone all over this broad land, will yet swell the chorus of the Union, when again touched, as surely they will be, by the better angels of our nature.”*

Over 1,000 photographers were involved in recording the conflict, working separately and in teams to produce portraits and views as well as memorializing events of the battlefield and on the home front. Photographs of soldiers and officers in uniform, recorded for their families in case they didn’t return, will be sure to be a poignant reminder for descendants.

The most rare are ambrotypes and tintypes of Confederate soldiers, drawn from the country’s premier archive of Southern portraits assembled by David Wynn Vaughan.

That type of exhibition is valuable as the lessons learned by our ancestors are important for us to know about. In the great scheme of things, and in life, we all no matter what our culture or creed, continue to progress and mature by fault. If we can learn through shows such as this one, from our ancestor’s mistakes and not by making our own, then we can grow a world culture that we can be all proud of. 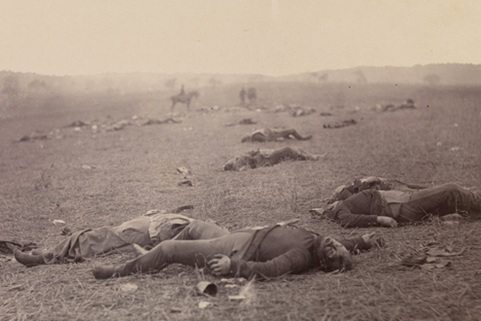 The ‘Harvest of Death’, the Field on Which General Reynolds lay and the image of  Private Parmenter Under Anesthesia remain a reminder to us all that we ‘progress and mature by fault’, subject to the frailty and foibles of our own humanity.

The show will also hopefully serve to continue to edge us incrementally forward on a new pathway of discovery without violence. And, instead of a reduction of errors being seen as regressive, they will be viewed as a hallmark of our success.

The exhibition will feature photographer Alexander Gardner’s haunting views of the dead at Antietam recorded in September 1862, which is believed to be the first photographs of the Civil War seen in a public exhibition.

A reporter for the New York Times wrote on October 20, 1862, about the images shown at Brady’s New York City gallery at the time:

…Here lie men who have not hesitated to seal and stamp their convictions with their blood, —men who have flung themselves into the great gulf of the unknown to teach the world that there are truths dearer than life, wrongs and shames more to be dreaded than death.” 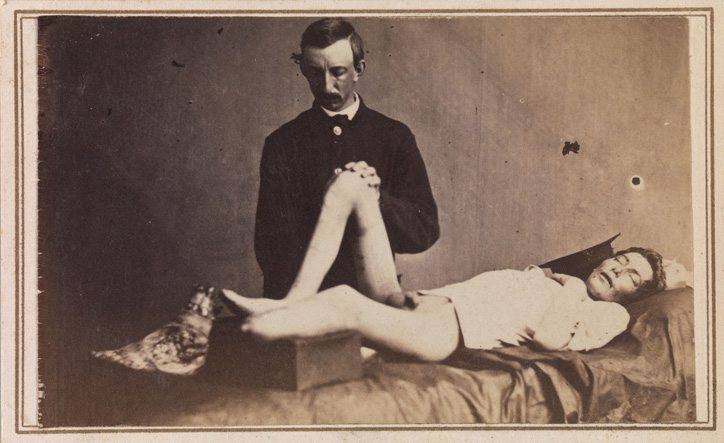 During eighteenth century enlightenment in Europe, England and America the advancement of society and knowledge meant that current theories and societal structures had to be replaced by new ideas. Many thousands died in the process. If we have now entered a period where it has to happen all over again then our next world view surely will be that we need to carefully balance the friction between expectation and outcome.

This show will be a graphic reminder of our always abiding duty to one and another while we seek the advancement of culture and society in an atmosphere of liberty and freedom.

“The dogmas of the quiet past, are inadequate to the stormy present. The occasion is piled high with difficulty, and we must rise — with the occasion. As our case is new, so we must think anew, and act anew.”*

Photography and the American Civil War In addition to providing a thorough analysis of the camera’s incisive documentation of military activity and its innovative use as a teaching tool for medical doctors, the exhibition explores other roles that photography played during the war.

It investigates the relationship between politics and photography during the tumultuous period and presents exceptional political ephemera from the private collection of Brian Caplan, including: a rare set of campaign buttons from 1860 featuring original tintype portraits of the competing candidates; a carved tagua nut necklace featuring photographic portraits of Confederate President Jefferson Davis and two members of his cabinet; and an extraordinary folding game board composed of photographic likenesses of President Lincoln and his generals.

The show also includes an inspiring carte de visite portrait of the abolitionist and human rights activist Sojourner Truth.  A former slave from New York State, she sold photographs of herself to raise money to educate emancipated slaves, and to support widows, orphans, and the wounded.

And finally the exhibition includes the first photographically illustrated “wanted” poster, a printed broadside with affixed photographic portraits that led to the capture John Wilkes Booth and his fellow conspirators after the assassination of President Lincoln in April 1865.

The exhibition is organized by Jeff L. Rosenheim, Curator in Charge of the Museum’s Department of Photographs. He has also written the fully illustrated catalogue, which was  made possible by the Roswell L. Gilpatric Publications Fund.

A variety of education programs will take place in conjunction with the exhibition.  These include gallery talks, a photography-based studio workshop, documentary films, lecture programs, and an interdisciplinary study day on the theme of “War and the Body.”??A special feature about the exhibition will appear on the Metropolitan Museum’s website (www.metmuseum.org).

Concurrent with Photography and the American Civil War, two related displays will be on view at the Metropolitan Museum: the exhibition The Civil War and American Art in the Robert Lehman Wing (May 28–September 2, 2013); and a selection of American prints reflecting Civil War themes, by Winslow Homer, Thomas Nast, and others in the Robert Wood Johnson, Jr. Gallery (May 20–August 25, 2013).

Additional works of art pertaining to the Civil War—all from the permanent collections of the Metropolitan—will also be on view in The American Wing.

After its presentation at the Metropolitan, the exhibition will be shown at the Gibbes Museum, Charleston, South Carolina (September 27, 2013–January 5, 2014), and the New Orleans Museum of Art (January 31–May 4, 2014).

The Coronation of a monarch of England is an ancient ceremony in which the church legitimizes the Queen being brought to monarchy who is anointed, not appointed